Good afternoon dear Blogger friends. Last week the Internet was very erratic. Then my monthend was upon me and I was busy with my virtual Weigh-Less groups from Tuesday morning  until Thursday evening.
However, somehow the Internet has played ball since 3am today and I'm making hay while the sun shines.
Not to put too fine a point on it: I am STILL tied to my bed with a vacuum pump attached to my leg. The good news is that the wound has healed completely. Yay. The sister will apply a conventional dressing on Monday morning and go home with the pump in her big black doctor's bag. She visits me again on Thursday and I think that should be that. From Monday I will return to the farm office next door and earn my keep again!
Having more time, while browsing through my archives, I came across several bird photos which I'm sharing here below. 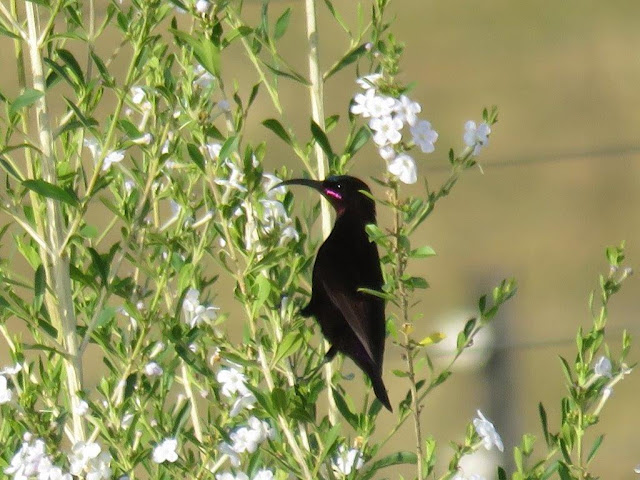 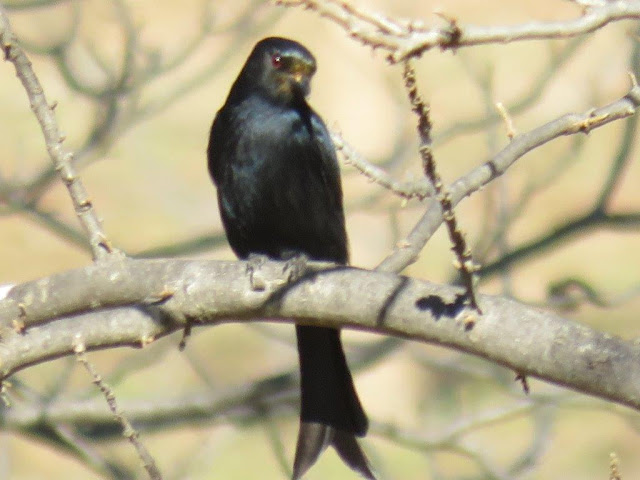 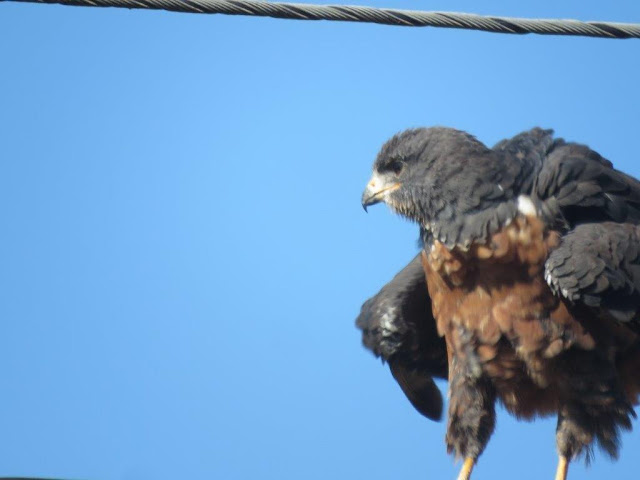 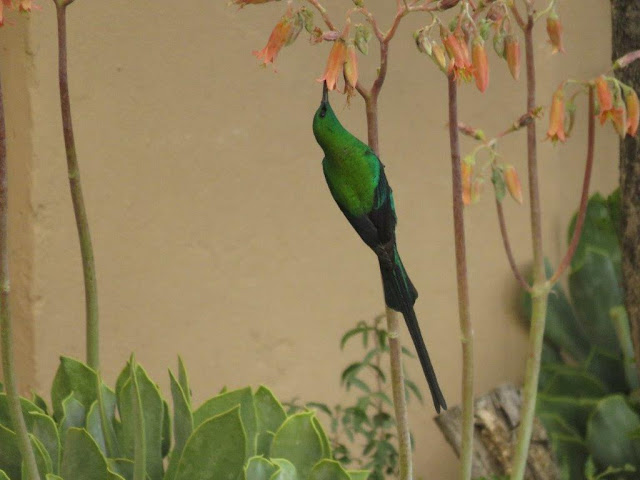 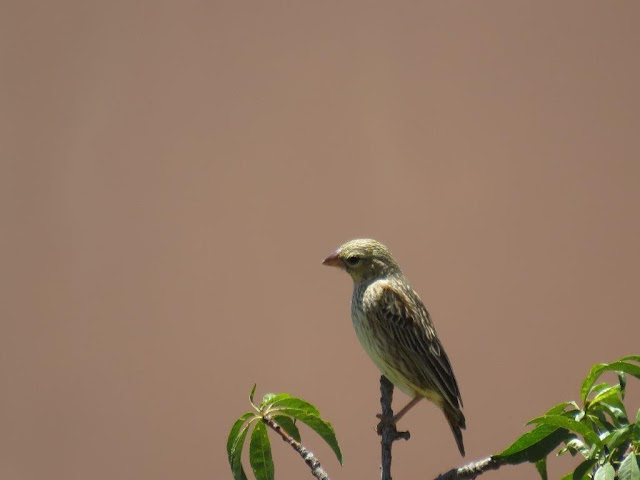 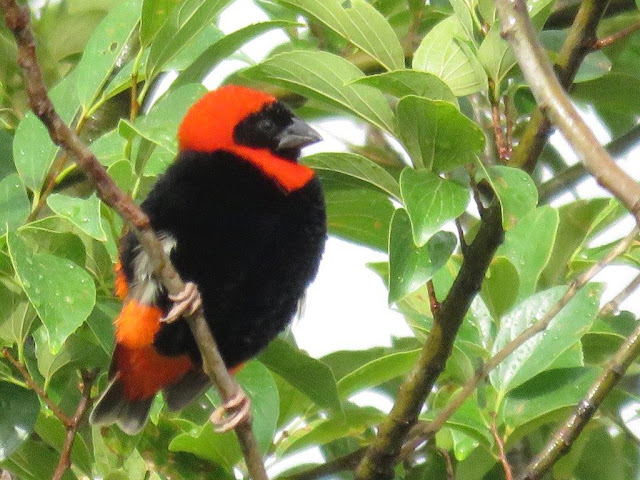 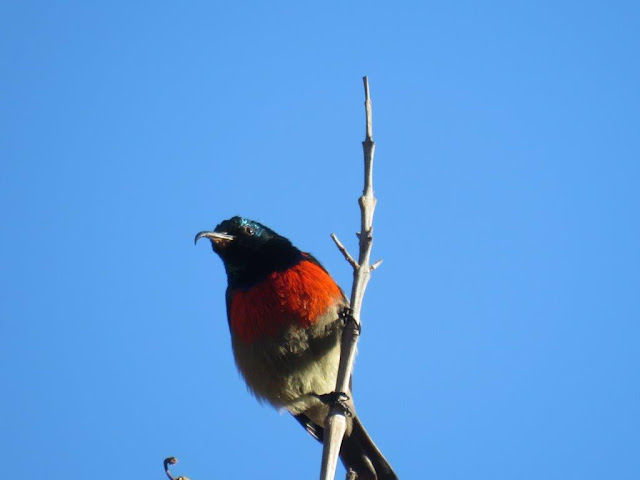 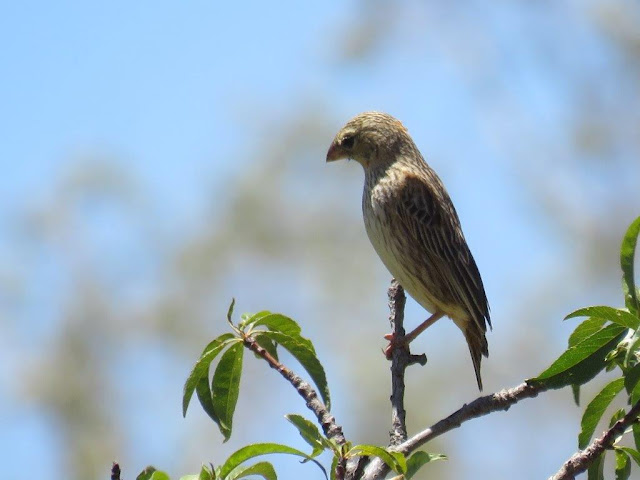 I don't know about you, but I'm still trying to get to grips with the different "look' of Blogger now. I'm linking to Saturday Critters with Eileen, here
HAPPY SATURDAY TO YOU ALL
Posted by Jo at 1:25 PM 9 comments:

While browsing through my archives on Saturday, I came across photos of a road trip on 12 July 2016. This was no ordinary road trip. It was a journey undertaken between our home in Marquard in the Free State and Cape Town on the Southernmost tip of Africa. 1,167km on the National Freeway, the N1. In 48 hours turnaround.

Our friend, Rudi had traveled up to Marquard from the Western Cape, earlier that week. Grant and Rudi had a mine business deal in Cape Town and decided to travel down in our car, stay one night with friends in Bellville and return the next day.

It's a loooong way to Cape Town and normal people normally did the trip over two or three days.

We used our car (seen here below) 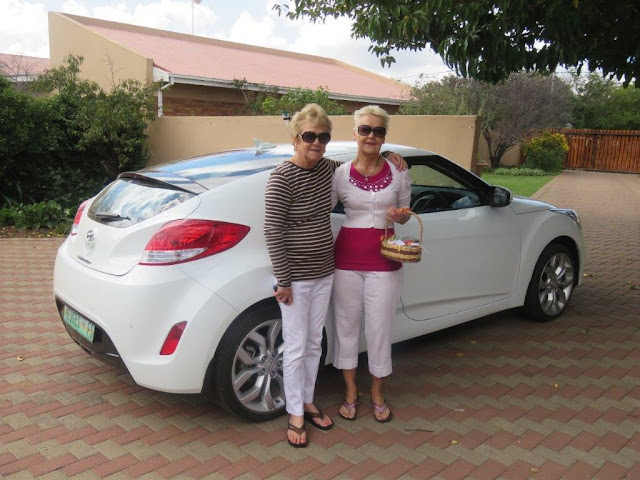 Grant was very particular about all his vehicles and didn't relish any marks or scratches on the car or motorbike.

A week before we did the road trip, I had to collect [Grant's] chronic medication from our local clinic. I popped in there mid-afternoon as the queues are much shorter at this time of the day. Back in the car, as I reversed, the afternoon sun blinded me quite a bit. I turned and drove forward and seeing a friend driving into the parking lot, I smiled and waved.

And heard a loud scraping sound...

Ergh. Those rims on the wheels (see photo above) are low and had caught the pavement kerb as I, half blinded, and waving didn't watch what I was doing!

I drove straight to Rina's house in the retirement center and asked her to bring a black marker pen to the car. Rina, always very highly-strung, immediately got the vapors and said "Grant is going to be so mad at you!"

I said thanks for the vote of confidence but this is what I want to avoid. Still shaking and mumbling, Rina bent down and blacked the quite-significant scratch on the left rear wheel rim.

I returned home, checked the rim when I got home and was satisfied that Grant's sharp eye would not notice anything amiss.

On the way to the Cape, I sat in the back with my laptop, in between taking photos of the passing landscape on my Canon camera.  Business was conducted, we slept over and left Cape Town early the next morning. Grant was driving.

During the morning we stopped off at small hamlet beyond Swellendam where Bertus and Baka lived.

Grant, Rudi and Bertus first met on the diamond mines (Oranjemund Namibia) in the nineties. In 2002 Grant employed Rudi and later Bertus to work in West Africa on the gold mines. In 2010, Grant had a project for Bertus while he ran a British plant hire company in Khartoum, Sudan. In 2012, Grant arranged with the MD of the Fluorspar mine where Grant worked in Kenya, for Bertus to spend three weeks helping with a project at the time. Here in July 2016, Grant and Rudi had successfully concluded a mine deal of safety protocols. These three musketeers come a long way and it was only fitting that while Grant and Rudi were passing, they visit Bertus.

By 2.30 pm we reached Colesberg, where I posted about the birds we'd seen while having a bite to eat. At 3 o'clock we were ready to take on the road again,

Then Rudi offered to drive.

Rudi suffered from COPD, a chronic inflammatory lung disease which obstructs airflow to the lungs. Rudi was also a chain-smoker; in fact I think the cigarettes somehow helped him to breath, as crazy as that may sound. Rudi did everything in slow motion, obviously due to his condition. So while a car trip from Colesberg to Marquard should only take four hours max, this was not going to happen with Rudi behind the wheel.

The N1 between Colesberg and Bloemfontein is flat, wide, well maintained and generally not busy with traffic. But Rudi engaged top gear and drove at a sedate 90kph. Not only that. Every 25 to 30 minutes, Rudi would slow down, pull off the road and stop the car.

Grant was not a patient man. Especially not this day. I chuckled quietly to myself when I saw him grab hold of the arm rest as we pulled off for the umpteenth time. Of course, he never once said anything.

Around 5.31pm (I know, because my camera file information gave me these details)  we stopped again and while the men stood at the car facing the veld beyond, I stood on the other side of the car and took photos. Of them and the sunset. 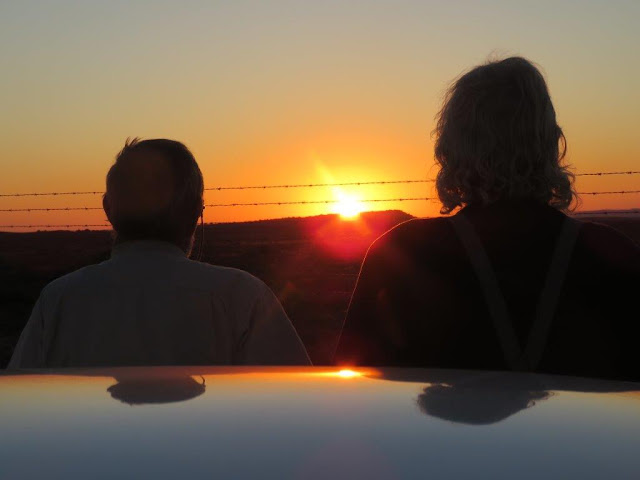 Rudi having a smoke, Grant beside him. Even years later I can feel Grant bristling with frustration at the delay

To be fair to my dear husband, he and I traveled extensively. In the car and even more trips on the motorbike. He and I both decided on a time to leave and we would leave then. Along the way, mainly when on the motorbike, we'd stop and take photos; pop into farm stalls and curio shops along the way. But we always reached our destination before the sun went down.

We eventually entered Bloemfontein and Rudi pulled in at the Bloem Engen One Stop to refuel. I visited the rest room and afterwards bought a snack for each of us. It was now 10pm and there was no ready food at home.

If we ever got there!

From Bloemfontein to the turnoff to Winburg (a town 60km from Marquard), we still traveled on the N1. Then we turned onto the regional road and had to slow to a crawl because of the potholes. These last kilometers were a nightmare, and as I said above, Grant and I would have been home many hours before this.

Finally we drove up the street where we had our home. Rudi used the remote which opened the gate. Both Eddie and Skabby came bounding onto the driveway in front of the car. Rudi (saying afterwards he was trying to avoid the dogs) turned sharply, too close to the gate post...

...and heard a loud scraping noise.

As Rudi parked the car on our patio, both front doors flew open, both men jumped out and went to assess the damage.

Grant was telling Rudi, "Not too bad; don't worry, Mate"; I unobtrusively took my luggage, greeted the excited dogs and went indoors.

Next morning while walking the dogs on the golf course, I phoned Rina. When I told her what had happened, she burst out laughing  saying I can thank my lucky stars Rudi is so slow!

Rudi passed away in October 2017. Grant at the end of November 2017.  Bertus passed away in March 2018.  These three intripids are managing earthmoving companies in the sky.

Hello all Mum's blogger friends; this is Ambrose posting about how we kitties help Mum while she has been not - too - well. 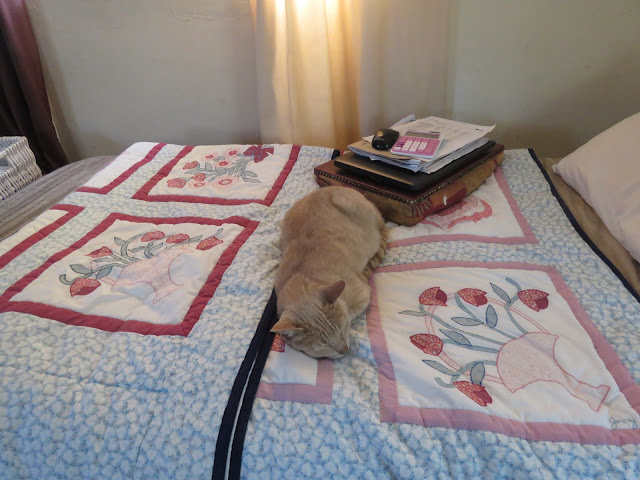 Mum enjoys our company so I stay close by her 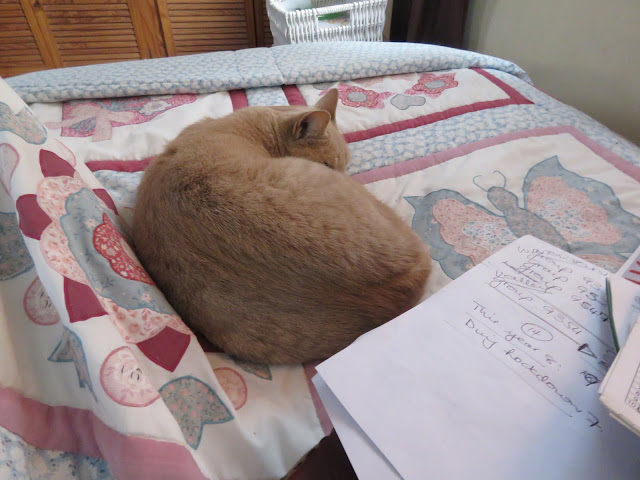 Aunty Jenny, Mum's nursing friend, brought this cheerful comforter for Mum to snuggle under. Of course, I love it too! Here I am lying against Mum's legs while she works at her line-on business

When the other nurse comes to help Mum, Missy jumps onto the cupboard and looks down on them both. The nurse is very stern looking and wearing a mask (as all yoomens have to now) she seems even more frightening. But she is helping Mum to get better by putting plastic paper on Mum's leg. 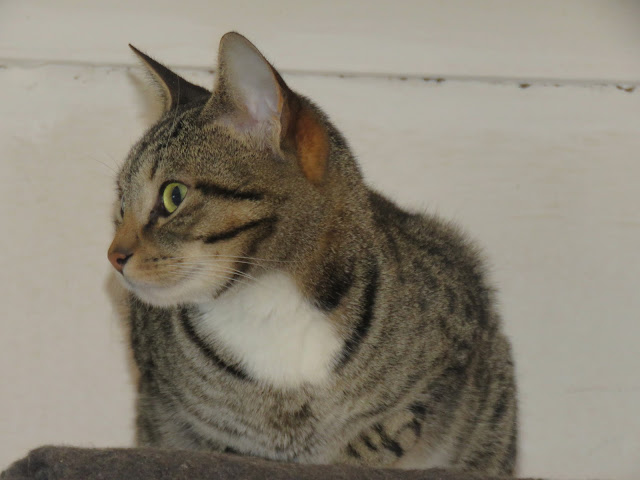 Missy on the cupboard while Mum's nurse is in the room

Below the lady kitties hog the bar heater. Behind the heater is a ridge in the carpet. Mum's house was the farm workshop and was built near a big tree. The tree has since died, but the root is under the bedroom floor. Unca Shadow used to like sharpening his claws on this handy root under the floor. Nowadays, only Chappie uses it. 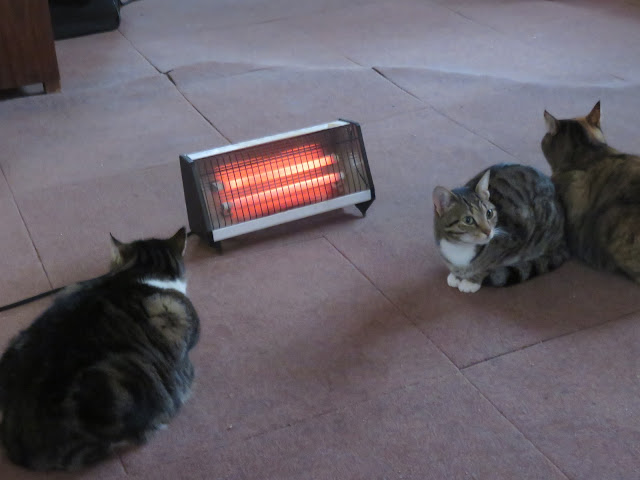 To all the other kitties out there, be safe with your yoomens.