On Sunday I stood next to a man at the check out point in the Supermarket. He was a biker, so naturally,m I struck up a conversation with him.

He left the store before me but when I got back to my shop, I saw him with his lady. Of course, I asked if we could pose for a photo.   Frances the security guard took the photo. 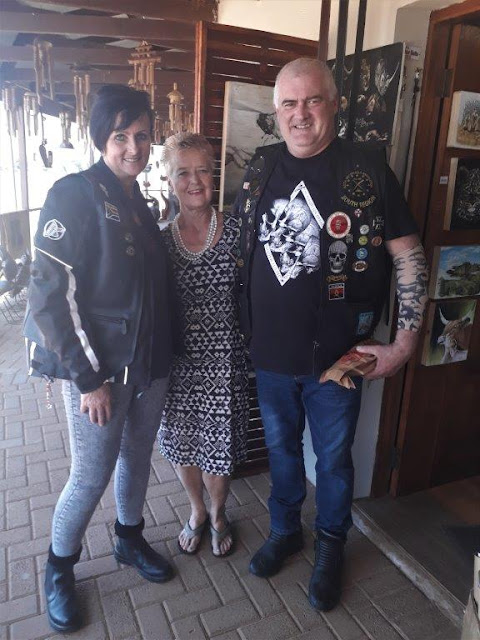 Hi Bozo and Mum's blog readers; this is Ambrose after a L O O O N G time. Mum has been busy and I didn't get to post about the Hedges kitties last week.

This week I found photos of Missy who has settled into our house and is part of the Hedges cats. She is very busy and dashes about all over the house. I used to be the littlest kitty; now Missy is the youngest of us all. Sometimes I play with her and sometimes Unca Shadow joins in. But she doesn't wait for us. She plays all the time - even on her own!

And when she's tired, she flops down onto the carpet. 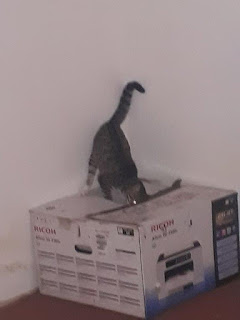 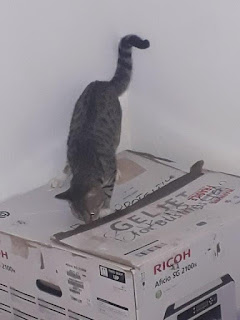 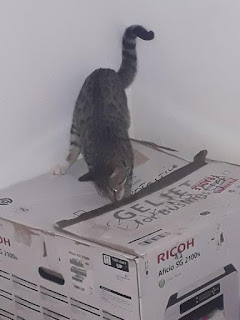 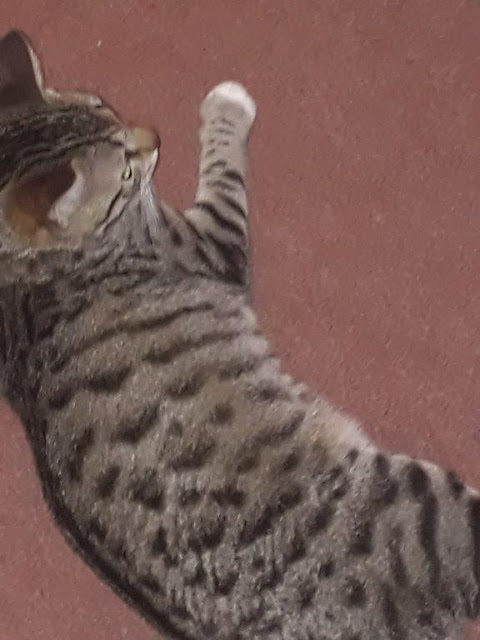 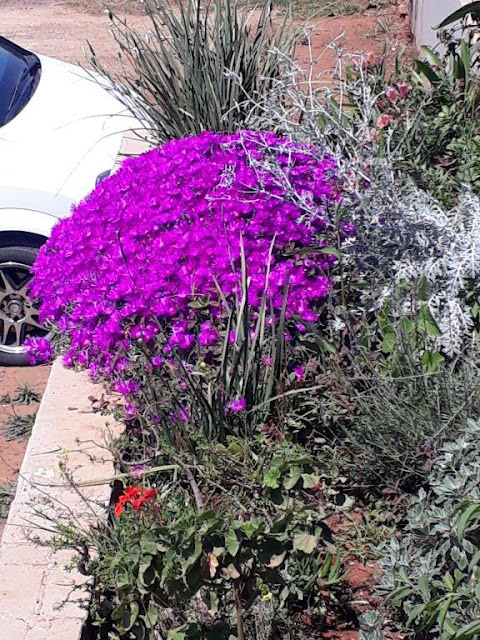 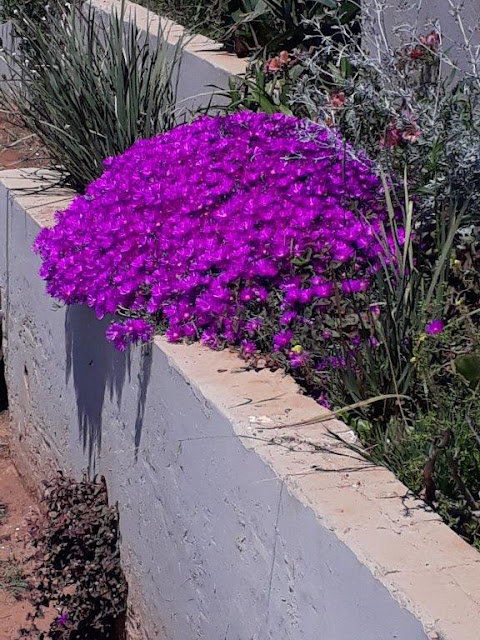 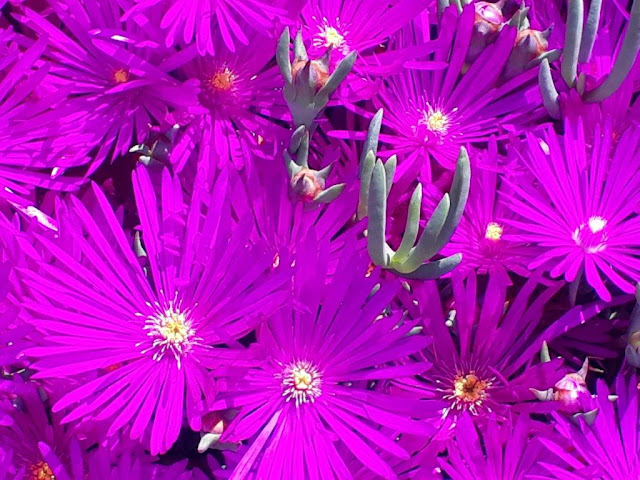 This beautiful succulent is flowering in the garden below my shop veranda. Isn't it glorious?

HAPPY FRIDAY TO YOU ! 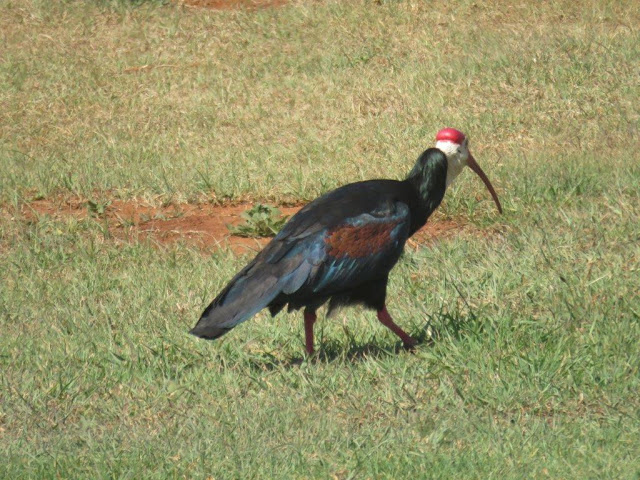 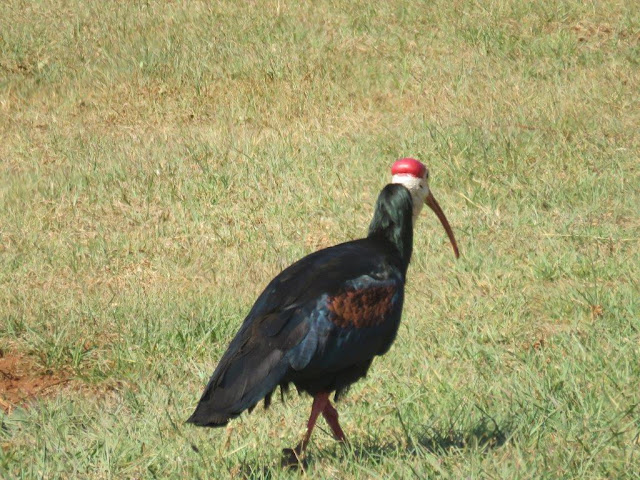 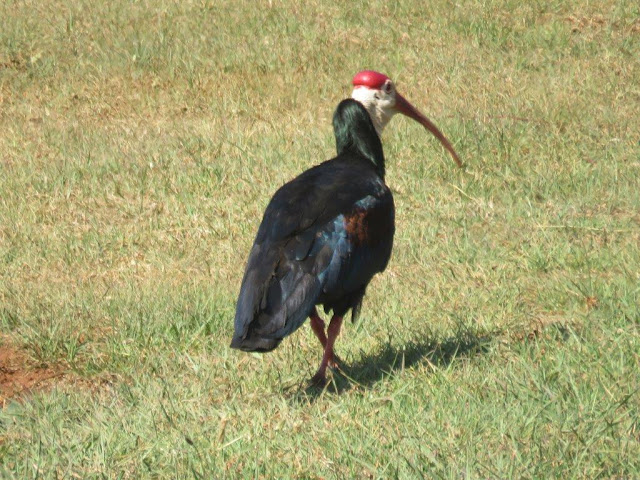 The Southern Bald Ibis is a large bird found in open grassland in the mountains of Southern Africa. As a species it has a very limited home range.

This large glossy, blue-black ibis has a unfeathered neck and head and a long decurved red bill. It feeds on insects, small reptiles, rodents and small birds.

This bird was grazing on the grass patch near the shopping center car park; quite unperturbed by the bustle and humans nearby.

Critter curiosity on the veranda

Last week I saw my first toad of the season. It hopped up the steps between my and Colette's lush gardens on either side of the main veranda entrance. As I brought my camera out, Lipsy, the veranda cat, was nudging the critter. Colette scooped her up and held her a little way in front of the toad. We were fascinated that it ducked its head when Lipsy tried to touch it, albeit, gently. 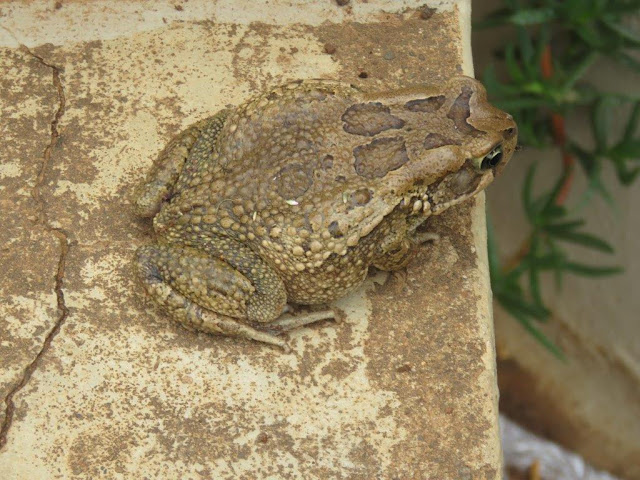 This pretty lad lives in our garden below the veranda rails 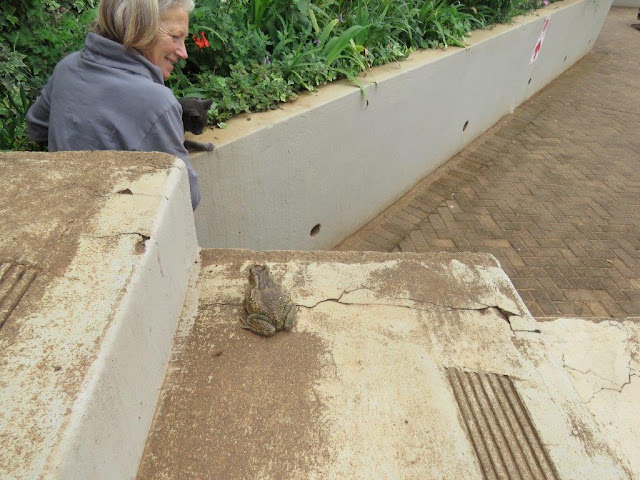 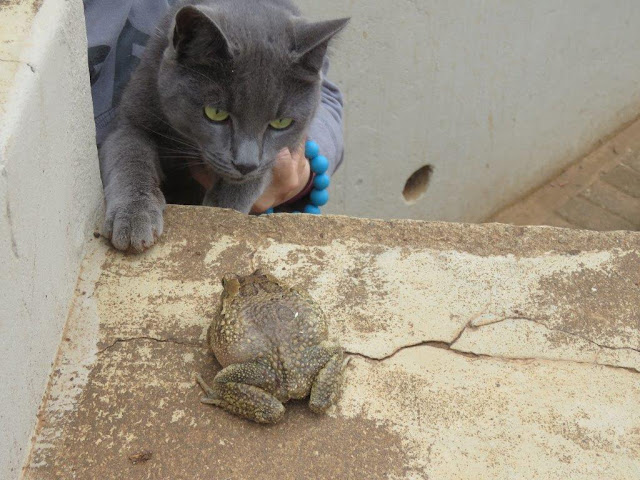 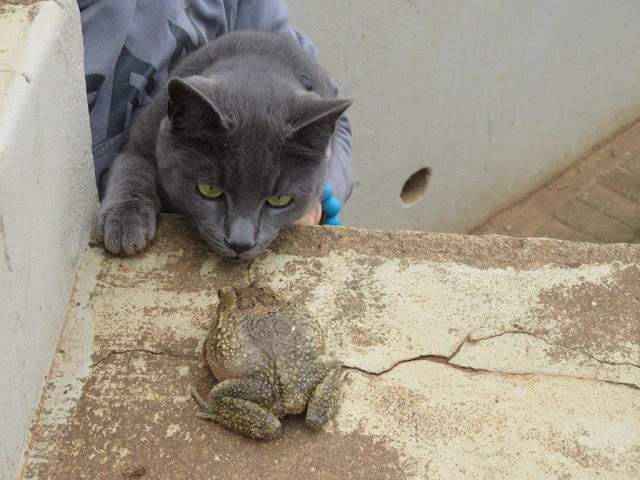 The toad ducked its head as Lipsy leaned forward to see what it was ! 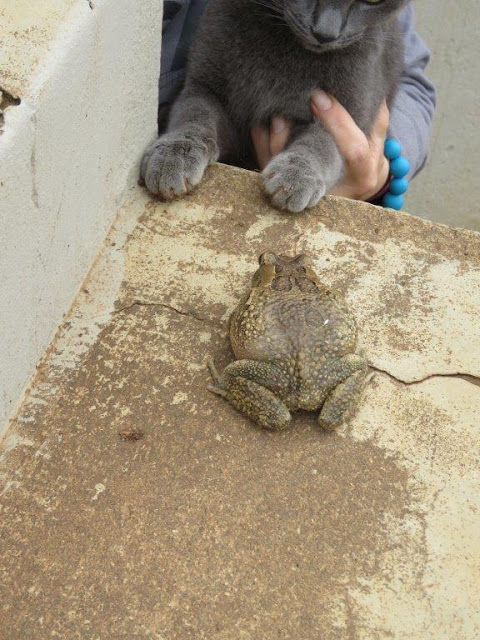 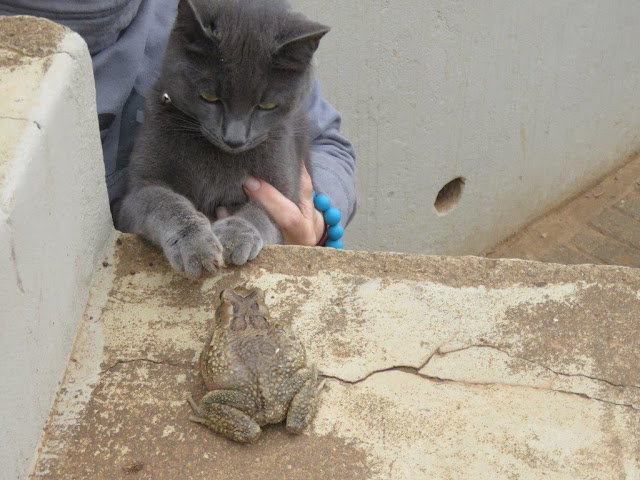 Gingerly putting her paw out towards the critter... 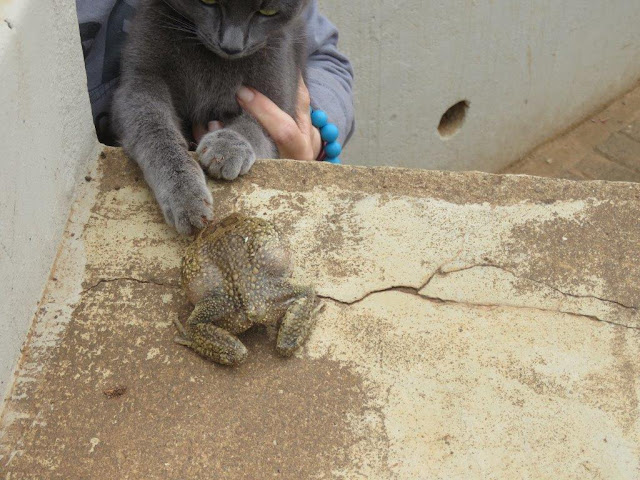 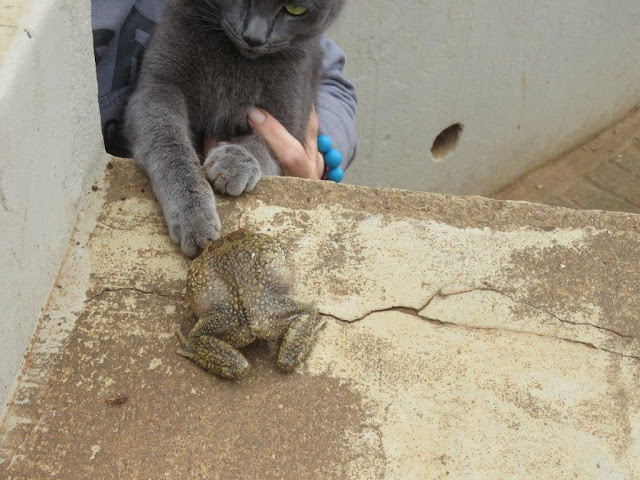 ... and touching it gently 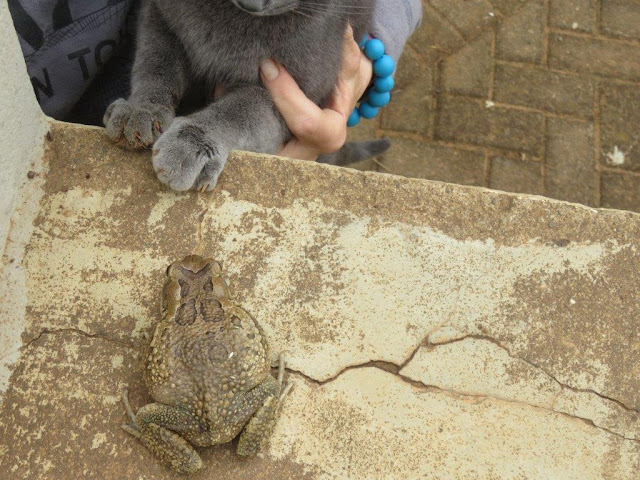 I'm linking to Saturday Critters here
Posted by Jo at 6:41 AM 9 comments:

Today, 16th October is exactly two years since Grant and I came to the Berg. We arrived on John and  Debbie's farm with two dogs and four cats in the back of a pick-up truck.  I knew that we were going to live in the rondavel so I quickly moved the cats' cages inside, shut the door and let the kitties out.  I posted about it at the time.

Eddie and Skabenga jumped down and immediately started to run around the huge lawn and sniff at bushes.

So SO much has happened this day two years ago.  Many of you know how I had to scoop up the ball when Grant died suddenly at the end of last year and how I've forged forward.

Thanks for still following my blog posts and commenting. It means everything to me.

Regular readers of my blog may remember a few months back I posted about the various jobs I hold. This is called moonlighing although I don't only have a second job; due to the nature of my position managing an art and gift shop in a popular tourist and local shopping center, I'm able to execute these other tasks.

I manage The Bunker, which many of you have seen me post about in my second blog and also most recently on Facebook Business. Thanks for liking and sharing these particular posts, which are ongoing. I appreciate that my holiday accommodation is being seen and shared all over the world.

Recently I was approached by a Durban businessman who owns a large house in the Valley. He would like me to upgrade, promote and manage it for large groups. We're currently mailing each other to sort out the nuts and bolts of running such an establishment. I hope to get this off the ground in time for rental during the coming Christmas holidays.

I have several lovely ladies who sell Avon skincare for me as well as selling to my own customers.

I also do private typing and draw up CV's and resumes.

This week I was launched as a Weigh-Less group leader. I'm attending a Weigh-Less workshop in Durban on Saturday and my launch groups will take place on Tuesday and Thursday next week. 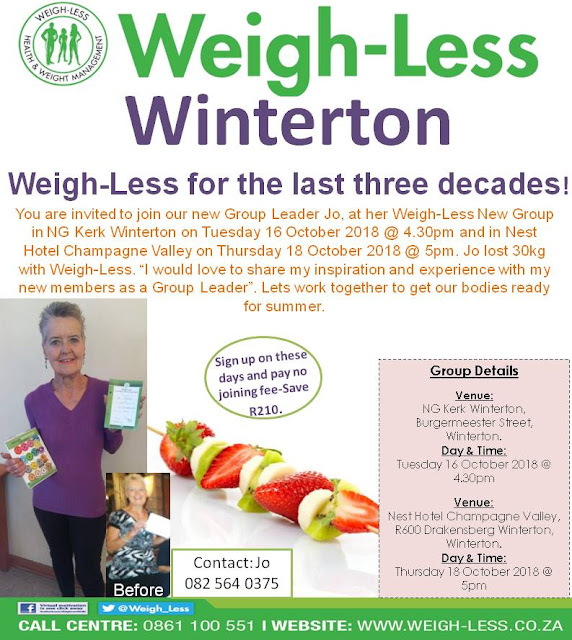 Please keep me in your thoughts and prayers that I may keep focused
and have enough energy for all this!


HAPPY FRIDAY TO YOU ALL !

More kitties on the veranda

Six weeks ago, John phoned and told me that a stray cat had had kittens in their cottage. He asked if he could bring mama and babies up to the Valley for adoption. The first thing I told him is that he'd be bringing coals to Newcastle. We have enough orphan kittens brought to the veranda. 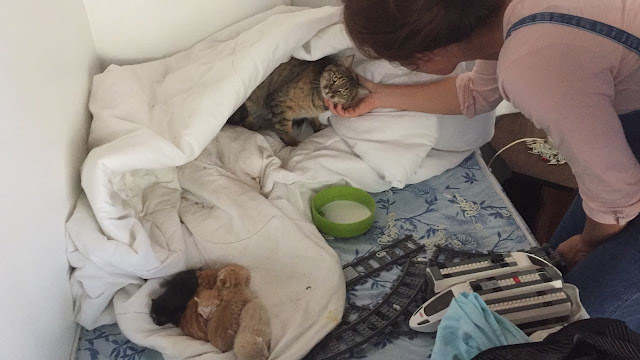 The next day he arrived at the shop, sans cat and kittens. He said they were too small;  he'd come up again when they were a little older.

I'd almost forgotten about them when he sent me a Whatsapp of mama with kitties nursing. Their eyes were open and of course, they were so cute! 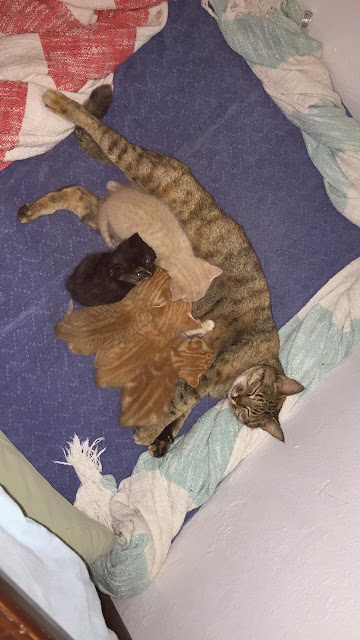 A week ago John and the three boys arrived at the shop. They had mama cat and kittens in a cat carrier. Colette, who'd set up a secure and quiet spot in the back of her hide shop, took them all out and placed them in their new home. 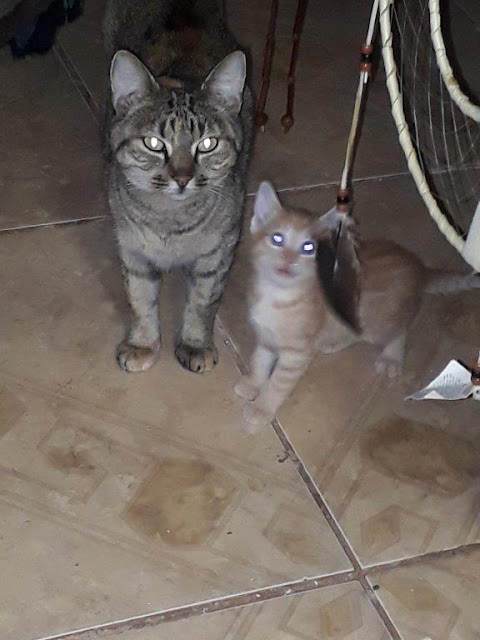 Mama cat and one of the kittens in their new home 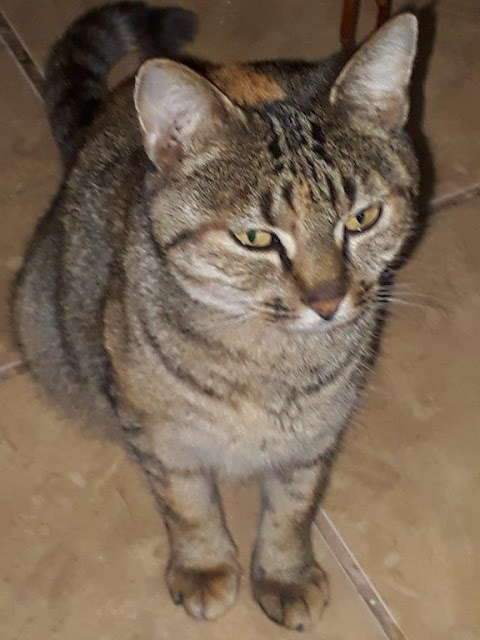 We named her Callie and she was spayed on Tuesday. John helped with some of the vets' costs 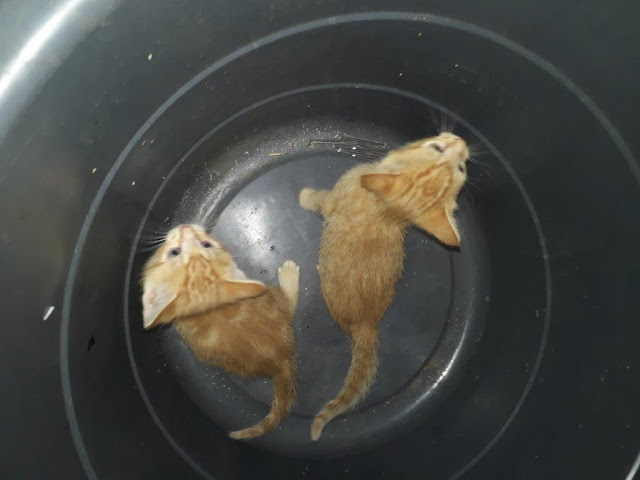 Two of the three dark gingers in a plastic bucket! 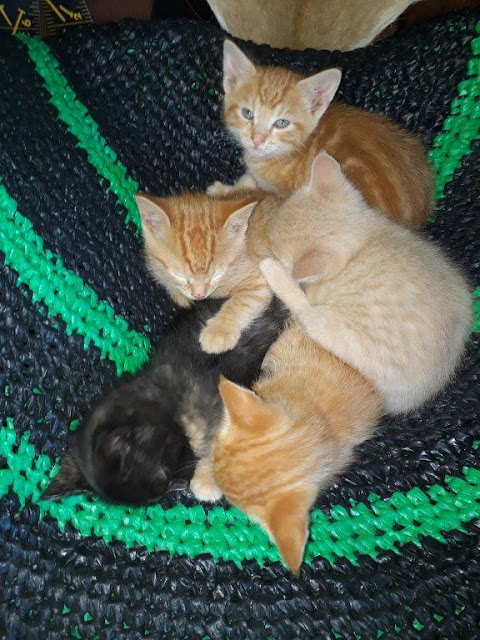 Callie has been moved to Colette's home where she will stay.

Now here's the irony. We're 250 km inland from the Eastern Seaboard which is the Kwa-Zulu Natal coast. John lives north of Durban i.e on the North Coast. My SIL, Shelley (my birding mentor), placed the photo of Mama with nursing kittens on her Facebook page. A friend of hers shared it with her friends and a lady from the South coast which is south of Durban and of course 250km from the Central Drakensberg. This lady wanted two of the darkest ginger kittens. I said I'd see if I could find someone going to Durban where she says she can meet with the persons bringing the kitties.

On Saturday a group of young ladies and a young lad were oohing and aahing over the kittens. Next minute the black one was spoken for. The same young woman who has taken the black kitten is returning on Tuesday and will take the two ginger kittens to Durban.

I have connected the new owner on the South Coast with the young Durbanite and they'll arrange how to hand over the kitties.

Never a dull moment on the veranda!

HAPPY WEEKEND TO YOU ALL!

As you all know, I love being in the center. One of the perks is that old friends pop in regularly to say hello. I've also been blessed with family calling - my two brothers visited at the beginning of September.

Last Friday, John, and the three boys (of my beautiful clan of six grandchildren) arrived to say hello. 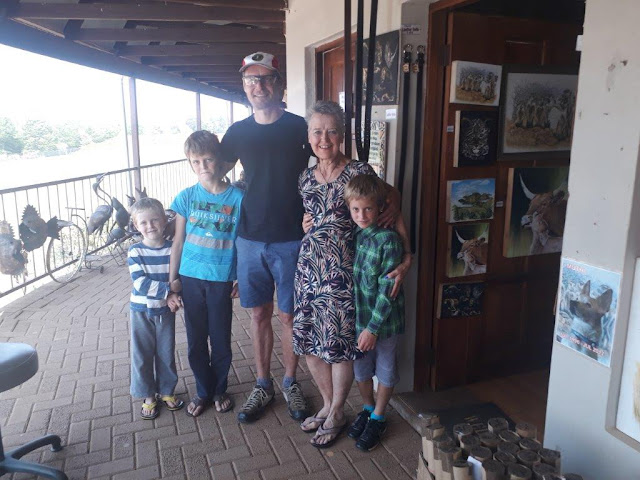 Life on the veranda

Over the year that I've managed The Art Box, I've posted extensively about life on the veranda; sales, kitties, swinging in Colette's hammock, customers and visitors.

There are three of us ladies: Jo - The Art Box; Charmaine, Champagne Valley Liqours and Colette, The Hide Shop. We  have bonded and together we enjoy the days - sometimes long; often devoid of business - by sitting in the warm sun and having a chinwag. 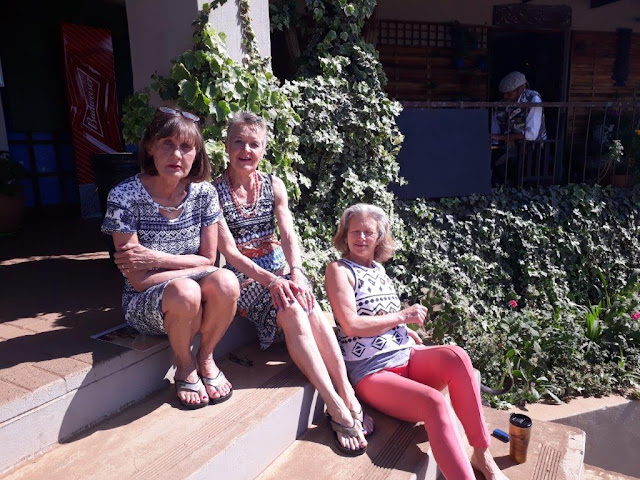 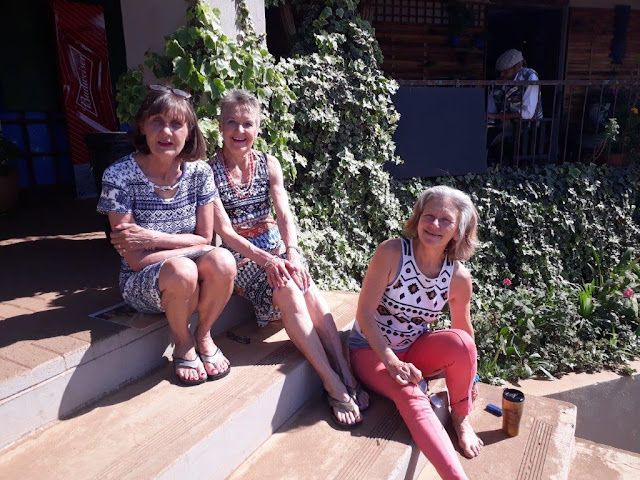