Good morning dear Blogger friends. In yesterday's post, I mentioned that a Goal Weight Member of mine agreed to be a guest speaker at an open meeting to be held next week. This is an effort of mine to increase membership in our venue groups. Many of the members who were used to physically attend a Weigh-Less group meeting, did not actually enjoy doing the "online weigh-in". While almost 80% reached their goal weight while we were still under Lockdown, a few just dropped out.

Upon re-opening groups in September 2020, the membership and attendance has been sparse. But this is the same with the local Book Club, the Garden Club and at church services. Covid caused a certain lethargy and apathy towards gatherings. My Group Assistant takes a realistic stand: she says many have gained weight while under Lockdown and are too embarrassed to return to group. Which is a pity, as our Weigh-Less groups are all about just that: Weigh-Less!

Ironically, since April 2020, after I registered my first online member from Australia, with Weigh-Less, I have built up a large Virtual group of members: topping 160 who weigh in online every week.

Meanwhile, I am promoting the special offer for next week's meeting with this poster below. 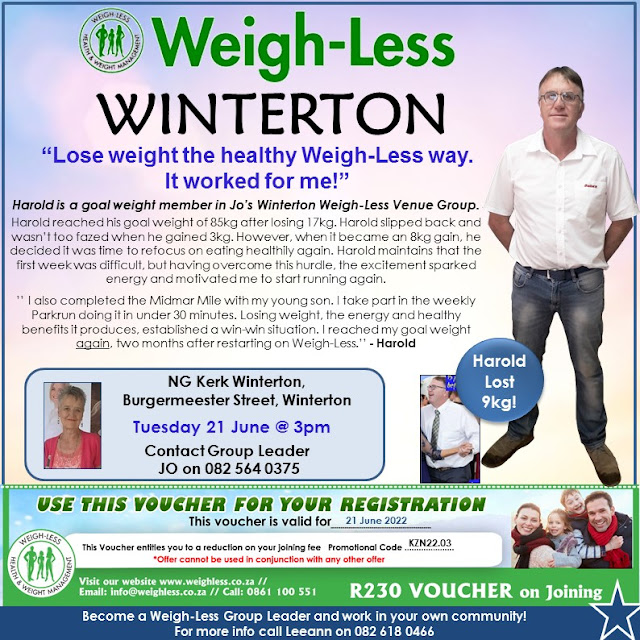 Harold is successful young businessman in town, a community leader and an avid sportsman. Now he has a success story to share with other hopefuls!

In future, I look forward to coaching larger groups of members which, hopefully, this promotion will deliver.

Good morning dear Blogger friends. For those who grew up in the 60's the term psychedelic will be reminiscent of flower power, hippies etc. I grew up in a very conservative home and society but I KNEW about these things. In fact, I remember writing an essay in my language class, describing the hippie scene so realistically which caused my equally conservative teacher's plucked eyebrows to rise into her hairline. Nevertheless, I received an  A+ for my work.

However, this post is about my new kettle, some 54 years later.

What happened was that the kettle at The Bunker finally gave up the ghost. It has been in constant use for the past four years. So without further ado, I took my one-month-old kettle up to the accommodation.

That meant that I now needed ANOTHER kettle for home use. I popped into our hardware store where a friend and goal weight member in my Weigh-Less group, is the owner. Harold spotted me in the aisle; I told him I wanted a decent kettle and he pointed to one by Salton. I blanched slightly at the price. However it was either that or the cheaper plastic jug kettles, which I did not want, so I put it in my basket.

At the same time I managed to convince Harold to be a guest speaker at an open Weigh-Less meeting later this month (there will be a post about this!)

Back home I half-filled the new kettle with water and plugged it in. 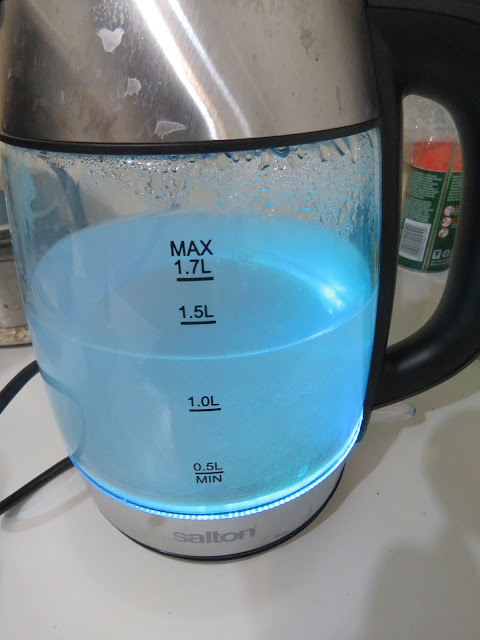 It starts off with a blue light 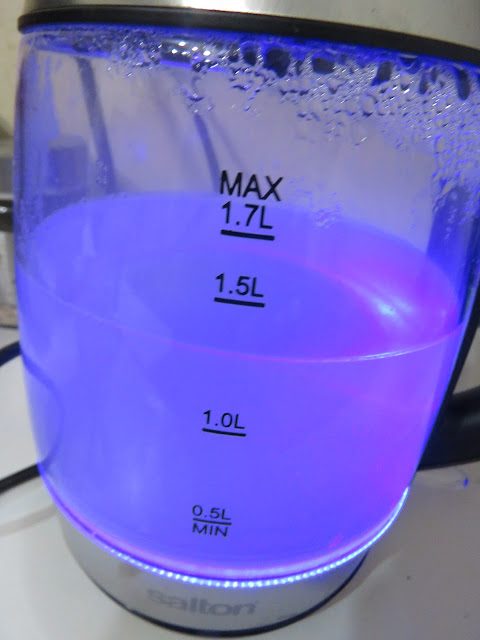 As it warms a little, the light turns purple 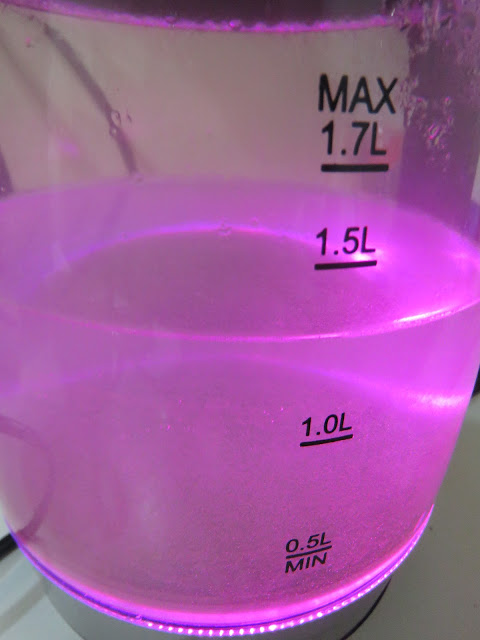 Much hotter now, it shows a pink light 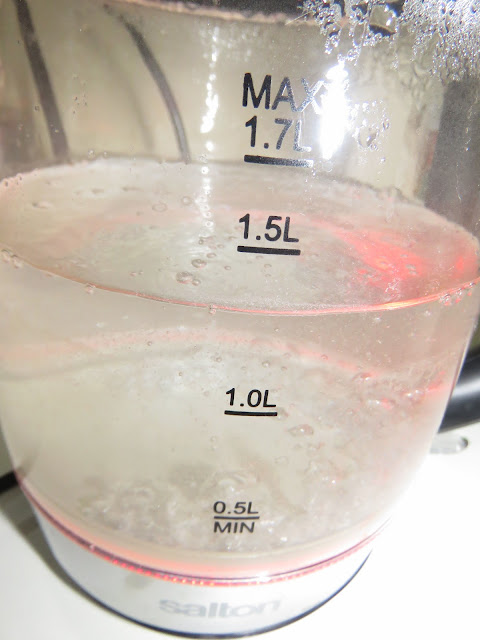 Strangely, it becomes almost transparent just before it boils 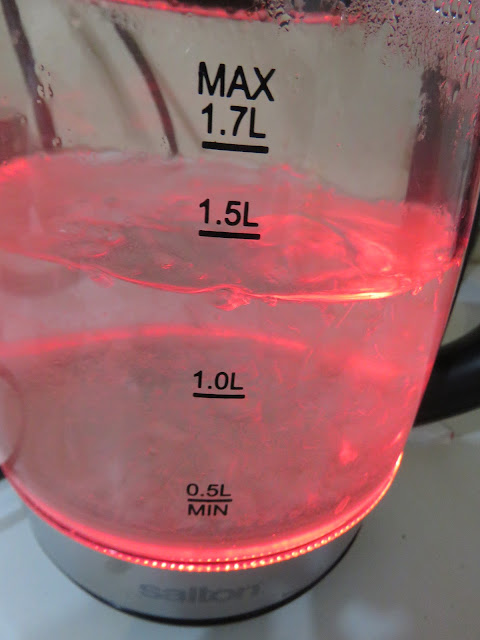 And bright red as it boils!
HAPPY WEDNESDAY TO YOU ALL!
Posted by Jo at 4:30 AM 8 comments:

Good morning dear Blogger friends. This week is a short week (we have Youth Day looming on Thursday) I have no breaks: I am in the office three morning and I am doing Weigh-Less groups on Tuesday afternoon. On Wednesday morning, while in the office, I also run my four online groups. After lunch Thandi and I Thandi and I will clean The Bunker for guests after guests who have been in since Sunday and prep for the next guests arriving for the long weekend.

On Friday morning I travel to Pietermaritzburg for business. After this is sorted, I will travel further south to Durban. I hope to have time to pop into the Weigh-Less Head Office and collect stock while meeting up with the staff whom I hear often on the phone, but do not see often.

Friday night I will stay with biker friends in Durban North.

The next day I am attending an awards  ceremony and luncheon for Avon Top Sellers. I am quite looking forward to this. 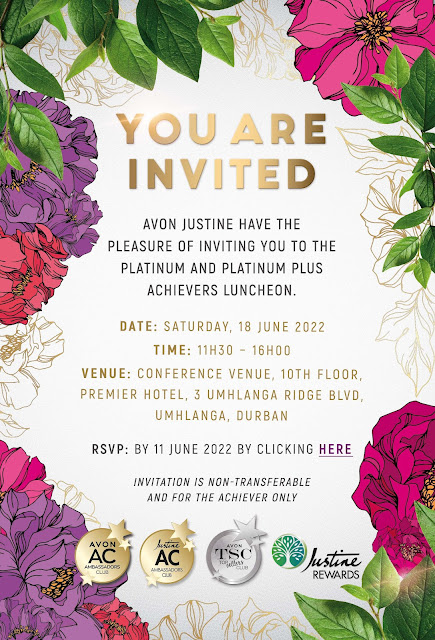 I fall into the Platinum Plus Achievers category
(Watch this space in case I get an award! Whoopwhoop!)

At the same time earlier this month, I received an invitation to a friend's 60th birthday celebration. 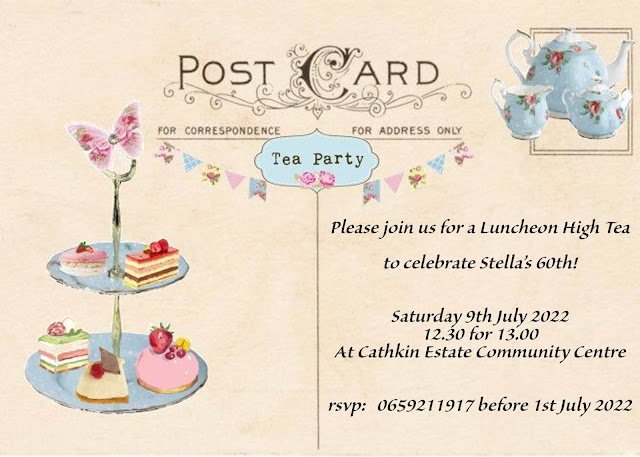 I look forward to attending this birthday party!
HAPPY TUESDAY TO YOU ALL!
Posted by Jo at 4:30 AM 7 comments:

Aloes abound in the Valley 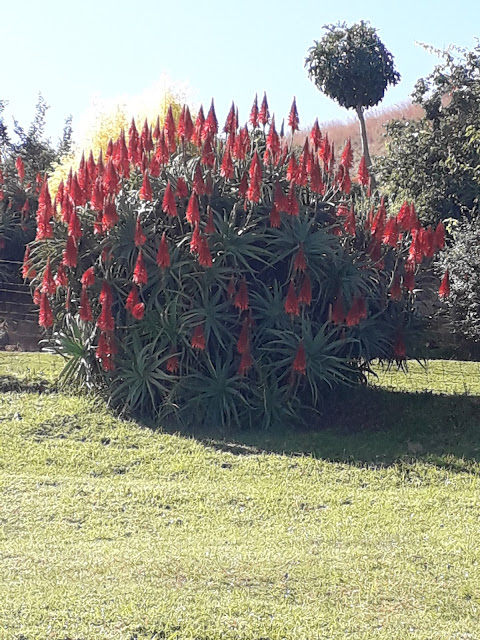 Aloe aborescens
This most glorious display at my friend, Marelize' coffee shop in the Champagne Valley. 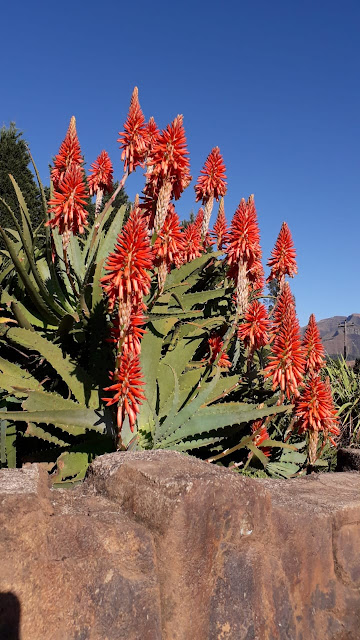 One of the many clumps of aloes at The Bunker
HAPPY MONDAY TO YOU ALL!
Posted by Jo at 4:30 AM 6 comments:

New kid on the block

Since losing dear Ambrose 14 months ago, I have had no desire to bring in a new cat.

However, the sun was setting over the farm as always, on Thursday. Just the end of another perfect winter's day.

Or so I thought.

At 5.30, my neighbor, who is head of the primary school in town, drove up the farm road towards the gate. Just below the houses, she stopped as there were three kittens in the road. ** She got out of her car; two of the cats ran into the grassy paddock. The third one came up to her and jumped into her arms as she was bending down to pet it.

With their large pack of 20 dogs, all she could do was to stop at my garden gate, phone me and ask me to come and take the kitty from her.

When I got to the car, she was hugging it tightly. Nine loves cats but she cannot have one in her house. I said I would keep the kitty overnight and give it to my friend, Coletten on Friday. Nine drove back down the drive where she had asked her husband to see if he could catch the other two cats.

I brought the rescue into my cottage and within half an hour, Nine knocked on my door. It was dark and the other cats had climbed under a farm trailer, so they had to abandon the search. She spent quite a while cuddling the rescued cat, already quite at home on my bed and then wished me good night.

I DID NOT TAKE THE CAT TO COLETTE 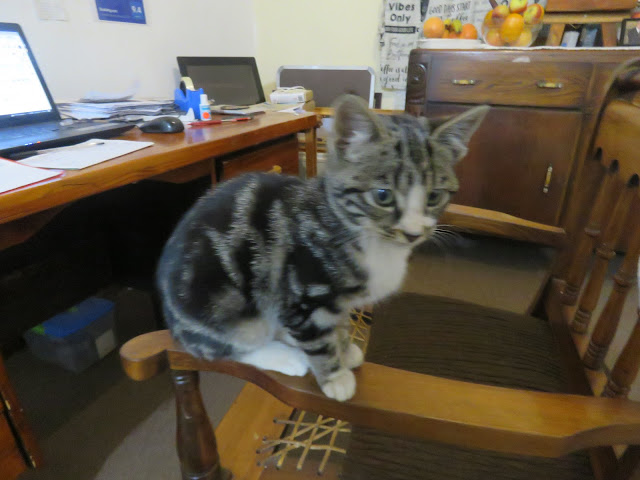 72 hours later - it's firmly ensconced in my household and is here to stay. 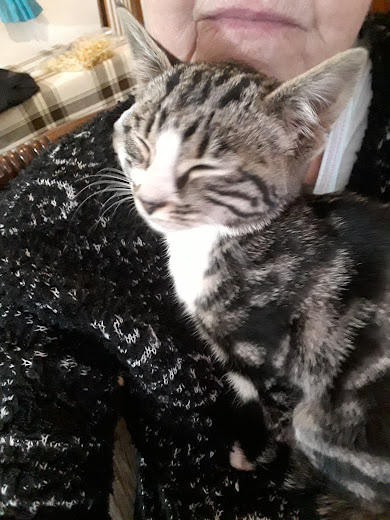 Asleep on my shoulder 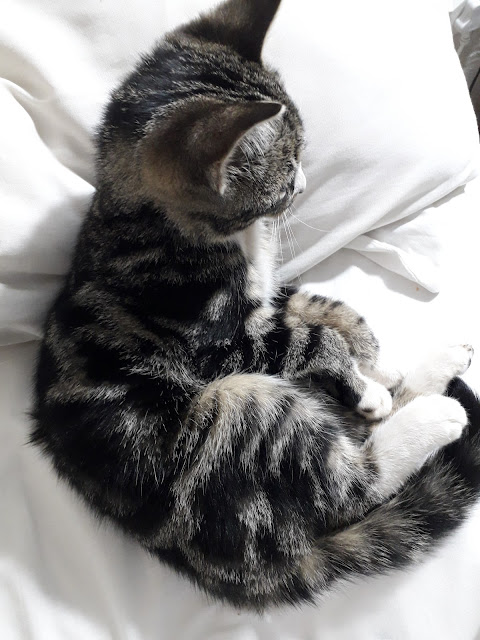 Favorite place? ON MY PILLOWS! 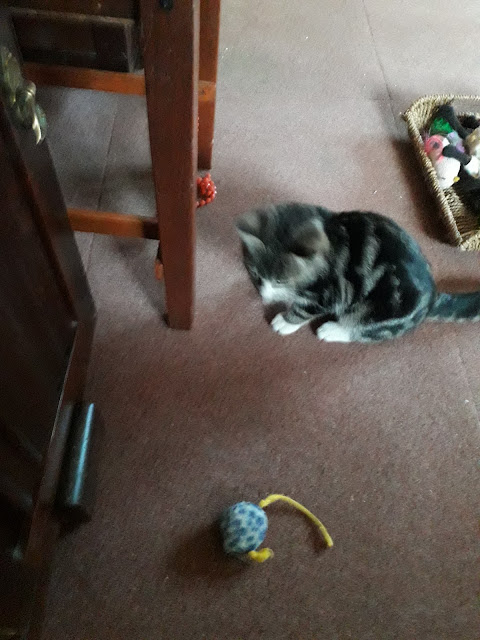 Lotsa toys to play with 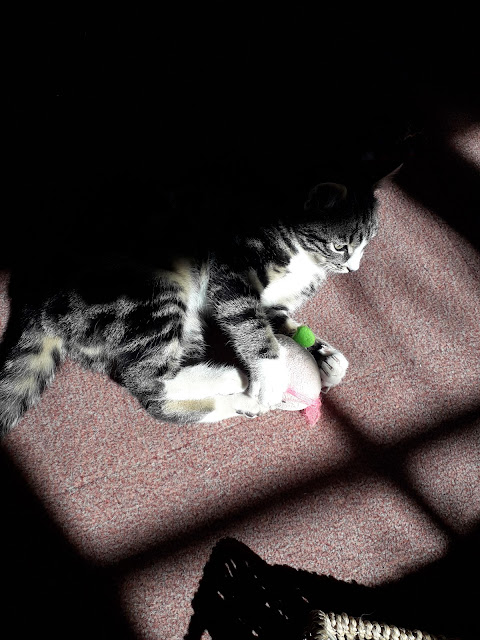 It's a very confident little cat

I'm not sure of its gender, so it has no name yet. Nevertheless, it has settled in and taken over.

To introduce the kitten to Skabby, I held it at his face and told him it was a baby kitty. And not to be rough. Skabby, the gentle giant, gave it a sniff and lick and accepted it as part of our family. Good boy Skabby!

The three resident felines? Uh-oh. Mama and Chappie stormed outside in a huff and have been watching proceedings from under a shrub in the garden.

Missy? Well Missy, muttering words like imposter, not acceptable, unbelievable, wrapped a small bag of kibbles and her favorite Shawn the Sheep toy, in her cuddly blanket, tied it to end of the a stick and with it over her shoulder, stalked off into thickets at the bottom of the garden. At last count, she was seen camping out on top of the cowshed roof. ##

Bloggers note(1): ** Thandi tells me that the local folk often dump unwanted cats on the side of the road. At least, these perpetrators had the forethought to dump the young cats near human habitation.

Blogger note(2): ## While the three older cats are NOT impressed with the new kitten, they do come indoors at night. Whereas before all three slept on my bed, now Mama and Chappie find other warm spots in the house to sleep. Missy still sleeps on the end of my bed but growls (yes, growls) incessantly.

So that is where we are at in the Hedges menagerie.

HAVE A GREAT SUNDAY

Good morning dear Blogger friends. Once again, I have been absent. But here I am back again.

Skabby and I have managed several walks here on the farm. Most times we see something different. But, always,  we see interesting things. 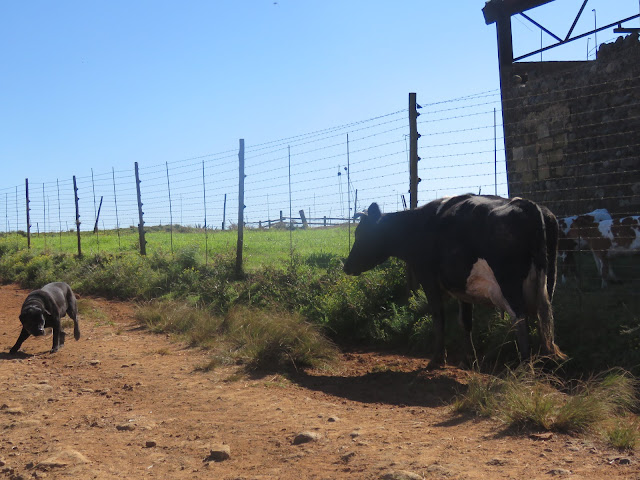 This mama cow warned Skabby not to come any closer - note his wariness! 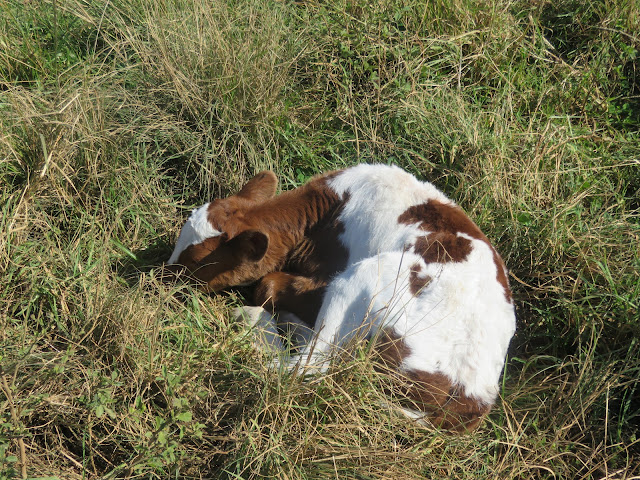 Further along, Skabby sniffed out a newborn calf sleeping in the grass 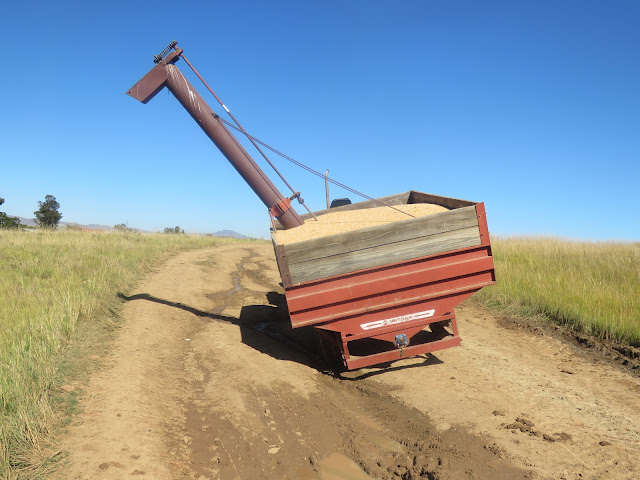 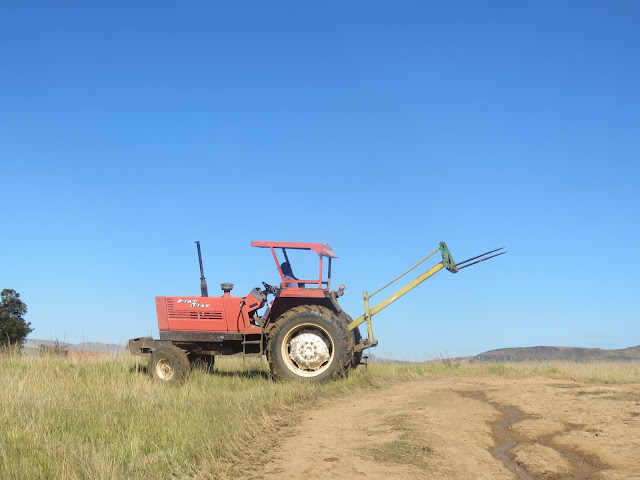 Vick brought a tractor to pull it out 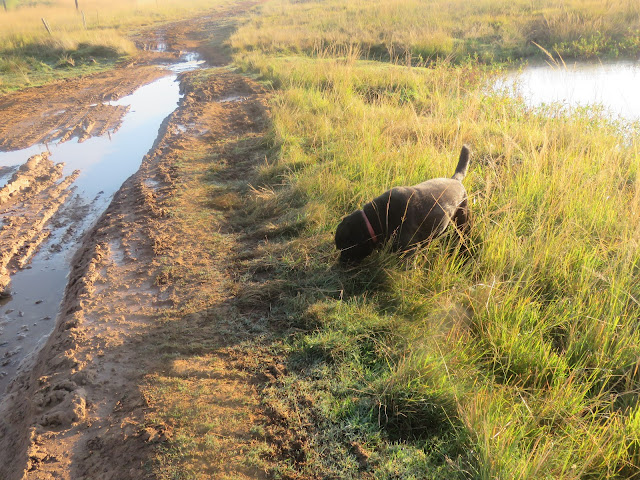 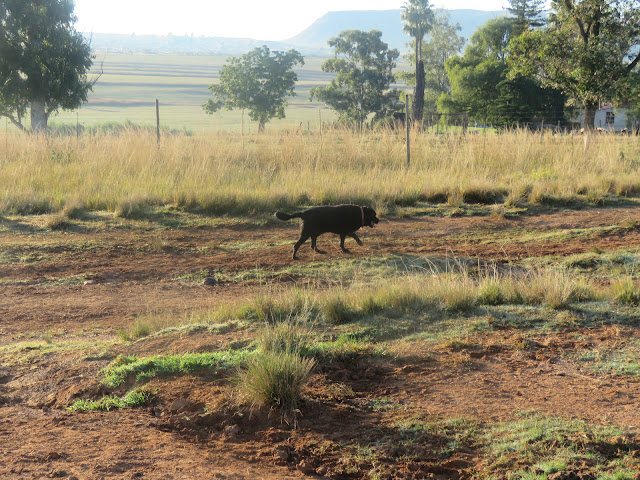 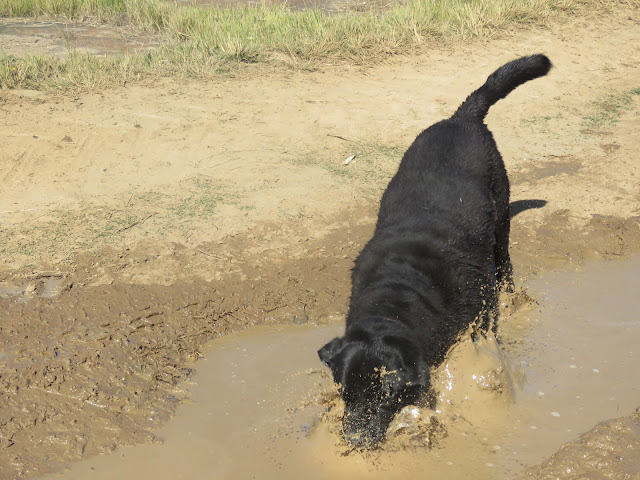 A Lab will always test the waters; the muddier the better 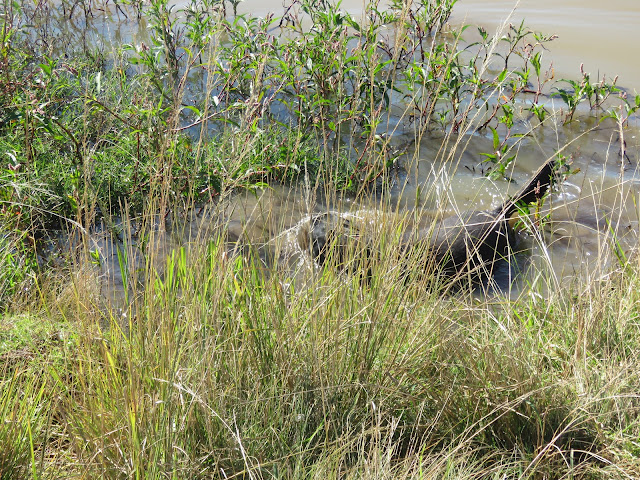 Skabby has imprinted the dam over the years: it's HIS dam! 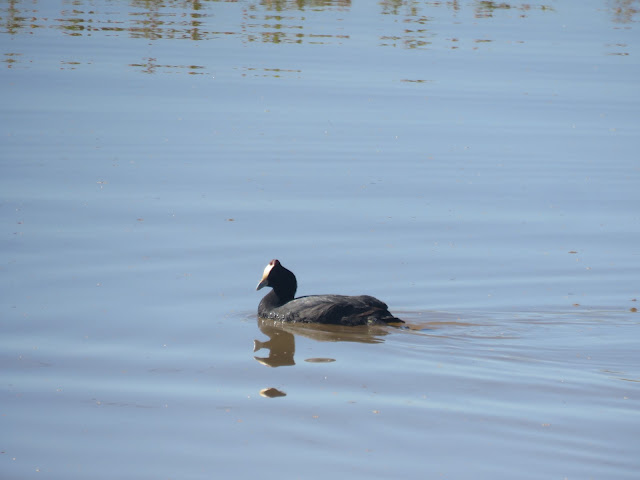 Red-knobbed coot on the dam 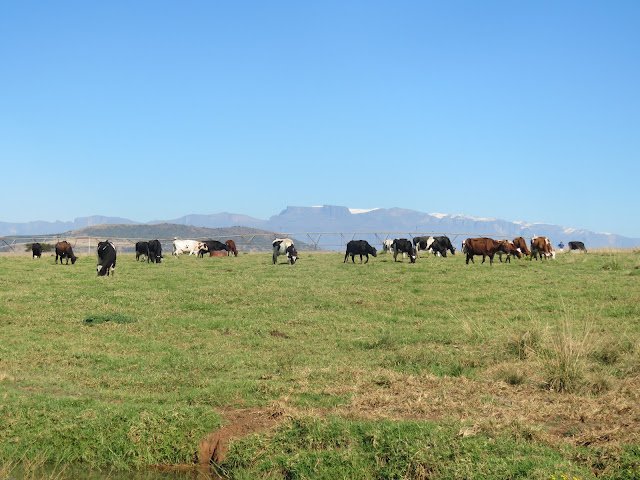 On the way back, we stopped to photograph the cows against the mountain peaks with snow
I'm linking to Saturday critters with Eileen here
HAPPY SATURDAY TO YOU ALL! 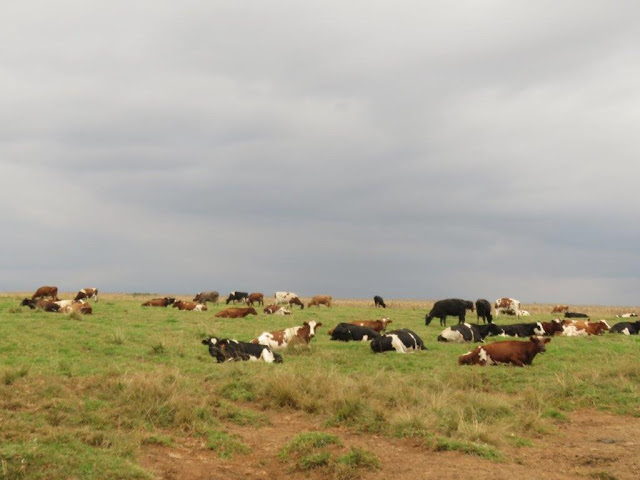 Lying down to avoid the chilly air
HAPPY WEDNESDAY TO YOU ALL!