Hello dear bloggers. I managed to help Ambrose post a while back and fully intended to get back to blogging myself.

However, last Saturday I had a call from, Lana,  a lady who'd been caring for my brother, Andries, This is my second oldest brother; Phillip, the oldest sibling, lives in Estcourt, 45km from me. Rosemary, the baby of the family, lives in Spain with her husband, Peter.

Andries, whom we called Boyce, had contracted the flu in June and Rosemary arranged for a doctor to call on him at home and treat him. He drained the fluid from Boyce' lungs , and then said he was sending samples away for testing.

Two weeks later Boyce was so weakened by the flu virus which is virulent in SA at the moment, that Lana asked me to fetch him and take him to be live with Phillip.

My family in Spain were very concerned that I a mature woman would drive this distance on my own. My neighbors, Ronnie and John were also worried and said I should call them from any part of the trip if I needed them to come and fetch me!

I left the farm at 5am; filled up with fuel in Ladysmith where my sister sent me as Whatsapp asking me to let them know the minute I arrived at Boyce's house.

I stopped in my brother's driveway at 9.45. Lana was waiting to accompany me indoors. She said I would get a fright when I saw my brother.

He had deteriorated so since I saw a photo of him in April this year. (the one here below) But we managed to help him to the car, with his personal possessions in the back and we set off. \]\

Along the way, he seemed to cheer up. He kept saying, I'm so glad I'm going home! We reminisced about our childhood and also about the fun times we had as young adults. Grant and I and Rosemary visited Boyce regularly at his bachelor pad in Johannesburg.  A great adventure in those days!

I stopped at Phillip's farm at 2.30 Sunday afternoon. Phillip was waiting and as we opened the passenger door, I was horrified to see how blue and swollen  Boyce's feet and ankles were. He hadn't said a word to me although I can imagine how his limbs must have been paining. We helped him out of the car and into the house - which took all of ten minutes - where he sat catching his breath while Phillip and I collected his suitcase from the car.

I came home and later Phillip Whatsapped to say Boyce was feeling much stronger and that he'd get him to hospital the next day.

But on Monday, on the way to hospital, Boyce took his last labored breath and passed away. 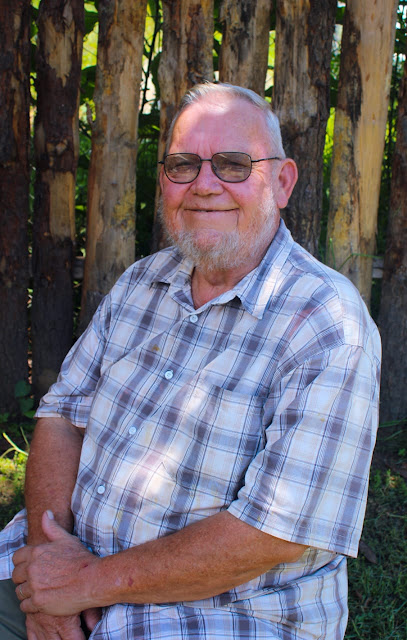 Rest in Peace our sweet brother.