On Monday I heard Missy sneezing; once, twice and three times. We all remember the messages flying around the socials at the beginning of Covid-19 of a cat sneezing and every human and critter fleeing from the scene!

However, I didn't imagine Missy had the virus. More like I need to watch her carefully. Within the next few hours, and again the next morning, I noticed that she wasn't dashing outdoors to lie and under the shrubs. She rather spent the day on top of the wardrobe.

The next night, she was lying on my bed and sneezed. And this time, there was the presence of blood.  I inspected her face; touched her nose gently: it was not dry and hot. Not being a vet, and caring very much for my furbabies, I decided to take her to the vet the next day.

On Wednesday morning I told Ronnie about Missy not being well and she urged me to take her to the vet. Easier said than done. I dusted off the cat carriers which have traveled all over Africa over the past two decades and before Missy could protest (she's a great protester!), I hustled her into the cage and locked the gate.

I loaded her into the back of my car and we set off. As the car pulled out of the port, Missy started to meow. All of 49km to the vet in Estcourt, my ears were assailed by her loud wailing. When I stopped and took the cage from the back seat, she stopped and looked out at this new world. She hasn't been off the farm since mid-2018.

Once inside the vet's rooms, he closed the window and asked me to remove her from the carrier. Missy grew up at the shop which I managed. She was always being petted and photographed and cooed over by passing trade.

You'd think that she'd be sociable.

I held and stroked her while the vet examined her but she shook and shivered and yowled all the while. She was terrified of this stranger! 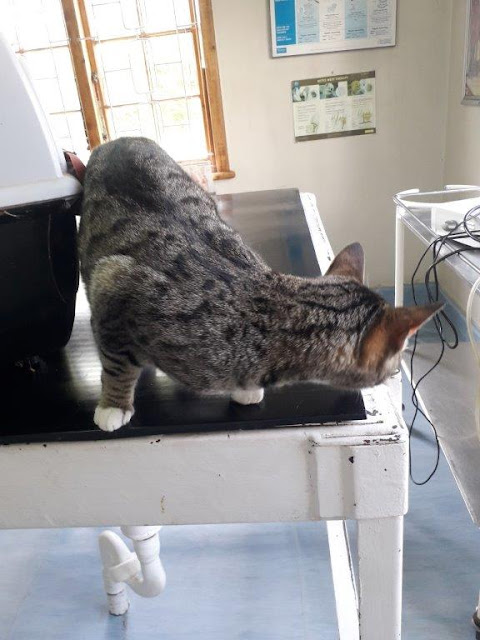 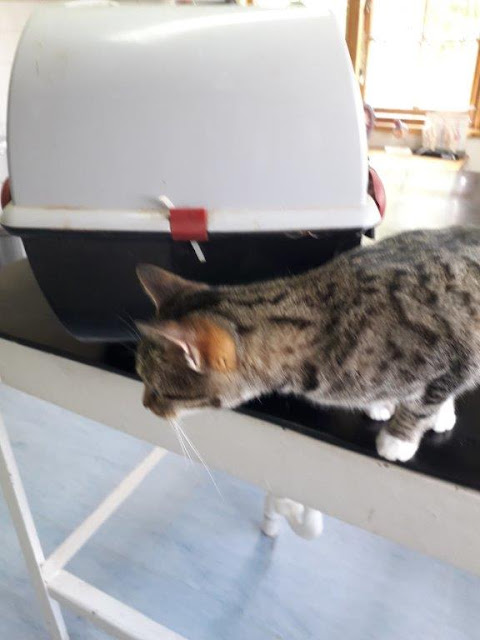 Very suspicious of this strange place 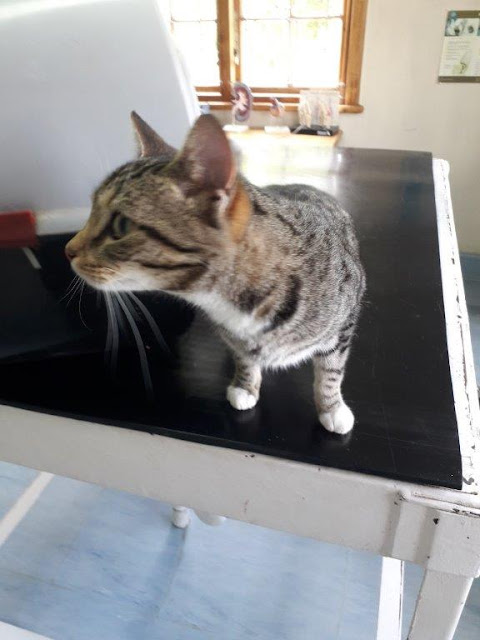 The vet took a blood sample and took her temperature. The sample yielded nothing untoward; her temp was normal.

He injected her with a broad spectrum antibiotic and cortisone to counteract any underlying fungal infection.

Back in the carrier she went; I paid my vet's bill and loaded Missy in the back of my car. She immediately set up voice and top decibel and continued all the way home.

When I opened the cage on the veranda her at home, she peered out suspiciously. Then Mama and Skabby welcomed her with sniffs and nose nudges. I carried her indoors, onto my bed where she curled up and slept until that evening.

At 8pm she stretched, sat up and looked around. She jumped off the bed and had a drink of water. A few pellets and she came back to bed, cuddled up to Mama and went to sleep.

Thursday morning, Ronnie popped in to see the patient and she was 100% better.

I still cant think what caused the sneezing and other symptoms, but I am glad she's back to normal.