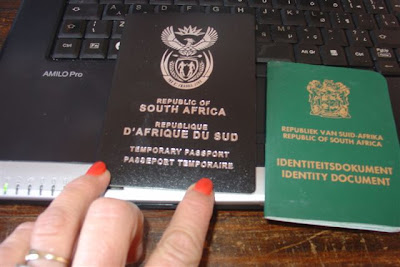 At last, my temporary passport. All South African passports have the new Coat of Arms on the cover now. (See the old Coat of Arms on my identity document)
The arrangements for my forthcoming trip to the Sudan to visit my husband will feature regularly for the next few weeks on this blog. For those of you who have not followed the first posts, if you interested, you can read about this here and here.

Now, any South African (and probably many bloggers from across the world) will relate to the effort I’ve had to put in to renew my passport. Last week on Thursday my husband Skyped me and reminded me that my temporary passport might be at Home Affairs. (I’d just about forgotten but my husband is so excited and keen for me to come up he had NOT forgotten, LOL) I duly telephoned the offices and was told there was no application in my name. I replaced the telephone, took a deep breath and dialled the Home Affairs number again. I asked the switchboard operator to put me through to passport collections and contrary to the first operator’s question of” when did you apply? Oh no, there’s nothing in your name...” he merely put me through to a back office (I presume) I gave the lady my identity number which she obviously punched into her system and said there was still no temporary passport issued in my name. However, she said she would follow it up with head office and asked me to phone her back at 4pm that day.

Once again my husband Skyped me at 5 to four and asked if I was going to phone Home Affairs about my passport. (I was glad he couldn’t see me blushing because I’d just about forgotten AGAIN!) When I phoned the lady in question (I’d taken down her name) she said she’d spoken to her supervisor and together they’d decided to issue my temporary passport without having the thumbprints verified (which was the reason why my temporary passport wasn’t issued on the day I applied for it) She said I could come and collect it on Monday. Although I was thrilled about my passport being ready, I had to wonder why suddenly I could get it without my thumbprints being verified. This makes me think that when I applied for this document on 16th July and my thumbprints didn’t show up on the computer, they did show up later when this clerk verified them. 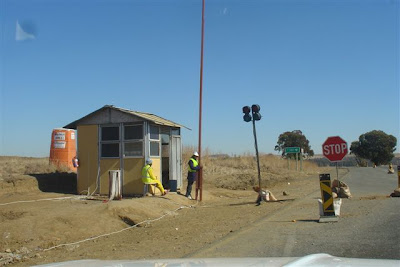 On my return trip, I was first at the traffic control post and managed to get some photos

If you’ve seen my previous post you’ll know that to collect any identification documents from where I live, entails a trip of 120kms/75 miles. Normally this trip along one of our National highways takes me an hour. However, there has been serious road works for the past three years and you can expect to stop and wait at two traffic controls for a minimum of 25 minutes each. On Monday I waited twenty minutes at the first traffic control and fifteen minutes at the second.

Once I’d done some shopping while in the city, I drove back home. Yes, along the same route with the “Stop/Go” detours. This time I took many photos. At the first stop, I was first in line. I decided to photograph the lady who operates the communications system between the two points. Obviously she tells the other operator which car is first and which car is last in line. How else can this method work? 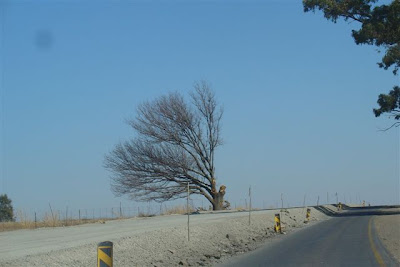 I "tiptoed" through the detour which was rough and rutted. Eventually when I got out on the other side, several cars overtook me which made me smile. They would have to stop and wait at the next stop which was only a few kilometres ahead. 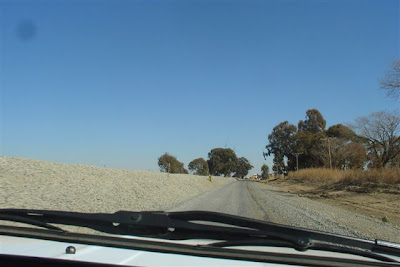 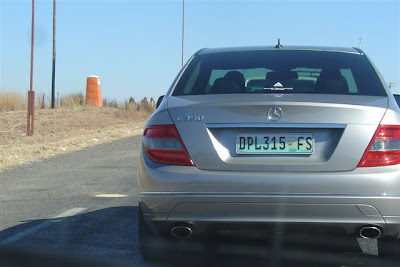 At the second "Stop/Go" traffic control, I stopped behind this lovely new Mercedes. However, it wasn't long before a soft drink/soda can flew out of the passenger window littering an area that was already strewn with rubbish
Sure enough, when I got to the next “Stop/Go” traffic control, all the cars which had sped past me were waiting in front of me! I pulled up behind a beautiful large C-class Mercedes. I could see by the license plate that it was this year’s model. As I watched, I saw a soft drink/soda can fly out of the passenger side window. Now, anyone who is South Africa will know that this country, as beautiful as it is, has a huge litter problem. We have landfills of garbage at the entrances/exits of all the towns and cities and our roads are often littered with bottles, cans, plastic bags and fast food cartons.

I pressed my horn but the occupants of the car obviously didn’t hear me. I was just toying with the idea of going to the car window and asking him to please pick up his can when the driver opened his door, got out and walked to the back of the car. He opened the boot/trunk and removed an attaché case. Aha, I thought, an intelligent young man. I leaned out of my car window and, after greeting him, told him that his passenger had dropped a can out of the car window. He nodded and turned back to the boot. I opened my door, leaned further out and asked him politely if he’d like me to pick up the can and place it in his car boot. He turned to look at me and when he saw I was serious, he walked to the can, picked it up and placed it in his boot. I thanked him profusely and we parted friends! 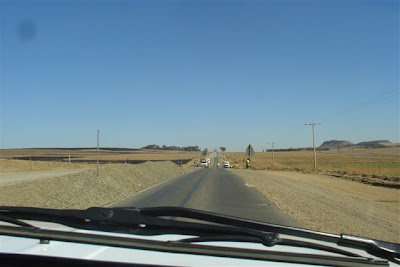 When the light turned green and the traffic control officer turned the board to “Go”, we all engaged gear and moved on through the detour. The rest of my journey was uneventful and I arrived home at 1pm. 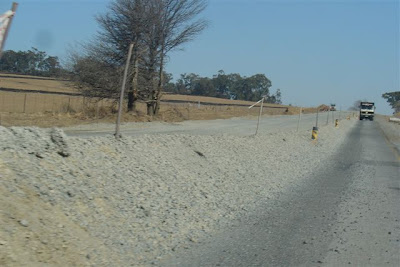 Every driver's secret fear: an oncoming vehicle on your side (in this case, the ONLY side) of the road. This was a construction vehicle which moved off to the side... 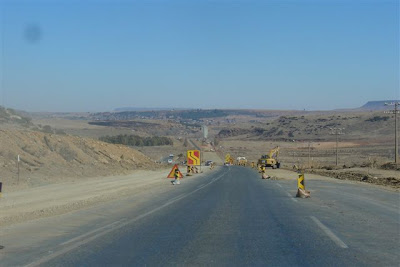 Miles and miles of detour 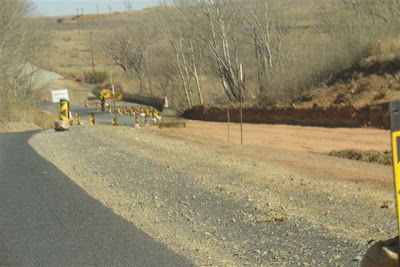 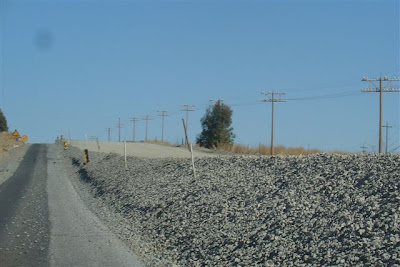 Gravel banks looming up on the side, half prepped road surface. 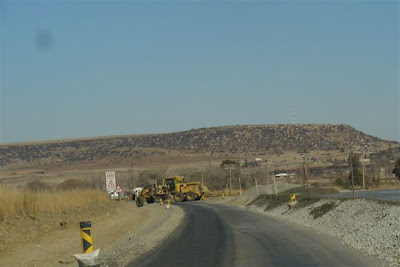 Graders, bulldozers, scrapers and tip trucks swerve on and off the road in between the oncoming traffic 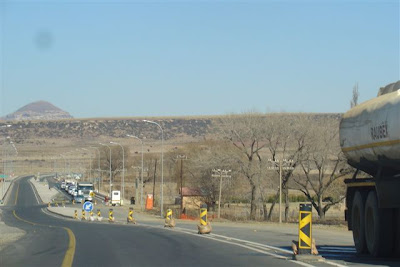 Approaching the end of the second detour. Note the line of traffic waiting for us to pass 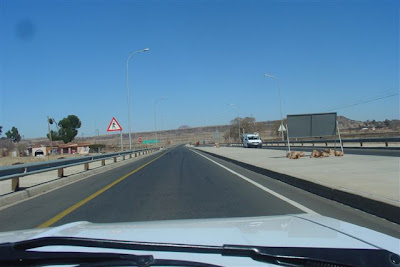 At last. This is the road surface we can expect the whole highway to be like once the construction is completed
Posted by Jo at 4:30 AM