In case it seems as though, a) we only have two cats namely Ginger and Shadow or b) that we don't care about our pets back home,  please read on.


I 've decided to write about our beloved pets in South Africa today.


For the past ten years, Emily, our Sesotho houselady, has taken care of our pets at home in our absence.
When we go home, however, the dogs are very forgiving and greet us like long-lost friends. Or like ever-present, loyal owners! The cats take a little while longer to "thaw" which barrier is broken when I give them speciall cookie treats in the evening. 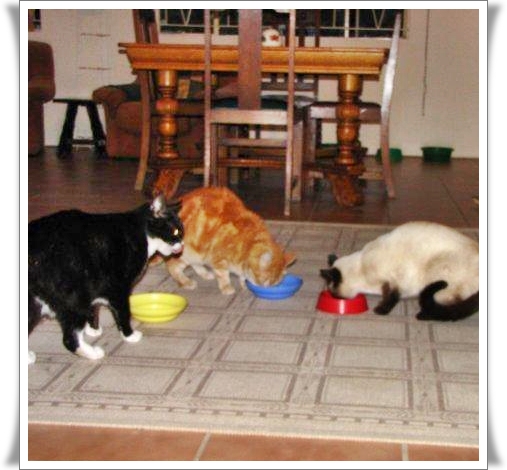 Felix, Ginger and Chip at the cookie bowls
In between, we spend time in the garden with the dogs and whichever cat deigns to wake up and join in the fun. When possible we take the dogs for a walk on the golf course two doors from our house. This causes great excitement; once we get to the 17th hole, across the course fence, we slip their leashes and they hurtle around the course with great abandon. 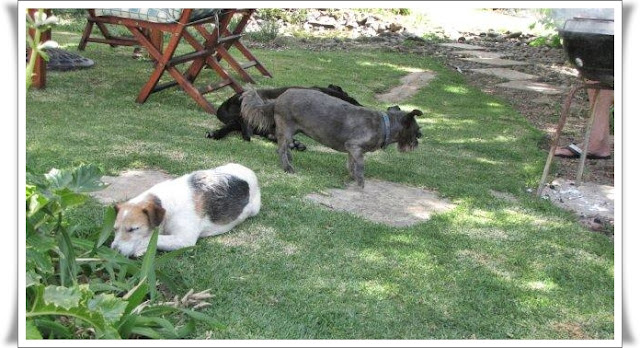 Our three dogs, Eddy (front), Megan (centre) and Angie (rear) lie on the lawn while we have a barbeque 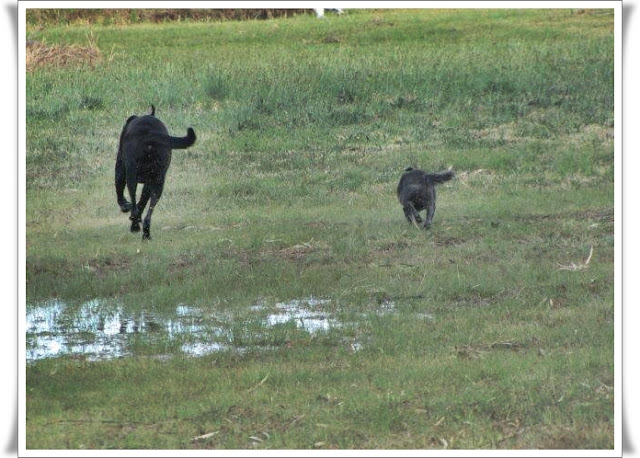 The dogs love running across the golf course. Above Angie and Megan show their heels. Eddy had already disappeared into the blue 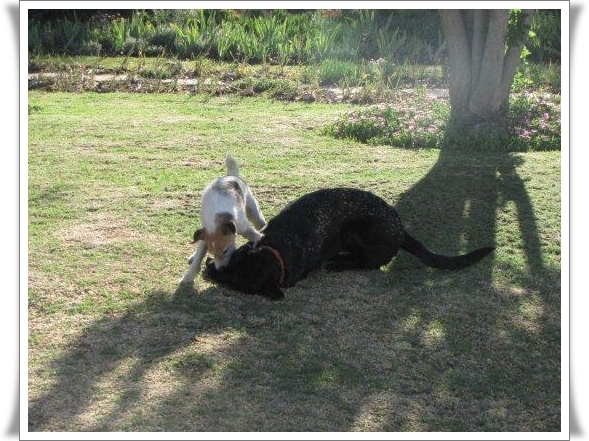 Eddy, inherited from the children, and Angie a rescue dog from the SPCA, have been great friends since the day we brought Angie home in December 2008

As normal, while home in May, Grant and I gave all the animals their three-monthly, de-worming medication and applied  spray, called Frontline, to their  backs. This is to keep any unwanted creepy-crawlies away and avoid nasty diseases like tick-bite fever. The dogs are no problem, but the cats, immediately remove us from their e-mail list !

This time all the yearly shots were also due. I always get our vet to supply the rabies and three-in-one shots and syringes for all our pets. He realises that it is far easier for us to administer the injections at home than to unsettle my elderly pets by taking them to the the surgery.

Angus came to our house one evening to help with the innoculations.  Dogs and cats have the same vaccine against rabies but the other innoculations are different strengths. Angus soon got the hang of drawing liquid from the one vial, squirting it into the vial with the powdered medication and drawing it all out into a syringe. I had kept the cats inside the entertainment area where they get eat and sleep. I held one cat at a time (there is a special way to do this without getting scratched or bitten but I won't elaborate here) while Angus first administered the rabies shot into the rump and then injected the three-in-one under skin at the back of the neck. Not that simple. The cats' skins were terribly tough (which I remembered from when I innoculated a very young Shadow in Khartoum last year) but eventually all four the cats were done and we moved on to the dogs. 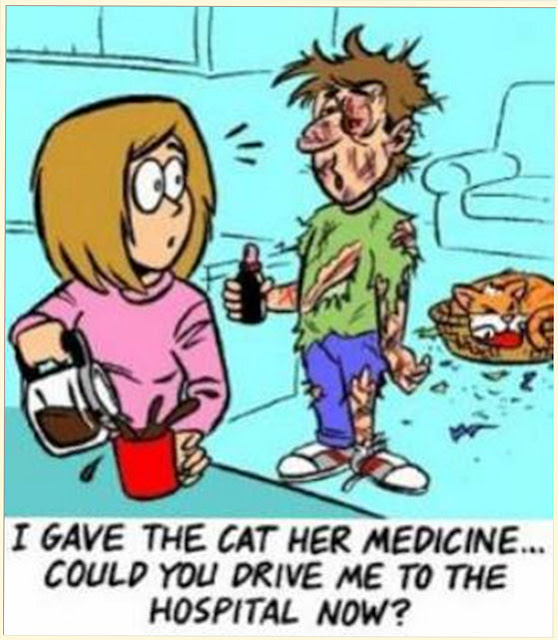 This is why I learnt how to hold a cat while administering any medication! Thanks Gattina for the cartoon!
The three canines were scrabbling at the door when they heard the cats were being given something. Not one of them are actually allowed indoors although Emily brings 11-year-old Megan - who is petrified of storms - inside when there is one. They all have comfortable, blanket-lined beds on a raised wooden pallet in the back of my garage.  During the day, they lie on the doorstep in front of the open door or in the sun on the patio. Every now and then they succumb to temptation, make a dash to the bowl of cat cookies in the entertainment area, and gobble as much as they can before being caught by a human!


Now though, as I bent down to catch Angie, she slipped out of my grip and ran across the patio. There ensued a chase and eventually I managed to get a good grip on her collar and lead her into the house. Have you ever been on the "other" side of 40kg Labrador trying to convince it to "come inside"? Grant arrived on the scene with a few pieces of biltong/spicy dried meat similar to jerky. Everyone in South Africa,  with the exception of vegetarians, likes biltong ! And since the pioneers in our country, the Voortrekkers preserved their hunted meat in this manner, the curs following their oxwagons eventually becoming domesticated pets,  also acquired the taste of this treat. Their descendants, which are all dogs in South Africa, also love biltong. Still a little suspicious of why I wanted her in the house, Angie couldn't resist the alluring smell of the biltong with which Grant enticed her into the house.

Angus, aka Dr Platzhund, (lol!) was standing ready with the first injection which he administered without any problem. Then it was another into her neck and she was free to leave. She dashed out of the house and into the garage, where I followed her to collect Eddy.


Eddy and Megan were a little easier ; I pick them up and carry them into the house for their innoculations. Angus also seemed to insert the needle much easier than with the cats. Grant gave these two dogs  a treat of biltong, which they devoured.

Not only did we make sure they were innoculated, de-flea-ed, de-ticked and dewormed;  we also bought new beds for the cats and the dogs. Puff and Felix (brothers) normally annex the two armchairs in the entertainment lounge. Tigger and Chip, respectively 15 and 12 years old, end up sleeping on the diningroom chairs under the table. When we placed the three new beds down for them, Tigger looked at each one with great disdain but Chip immediately made herself comfortable in the one and fell asleep. 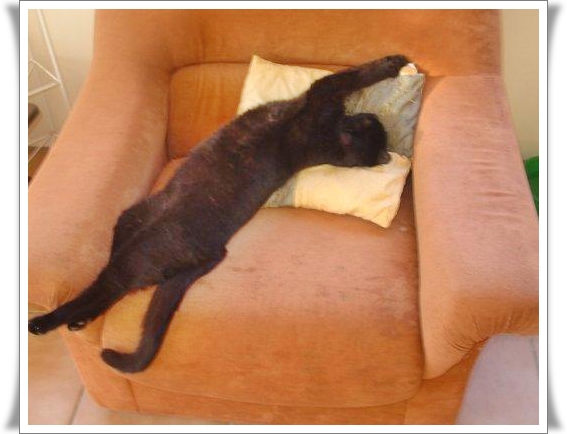 Puff, one of the "brothers", stretches out on an armchair 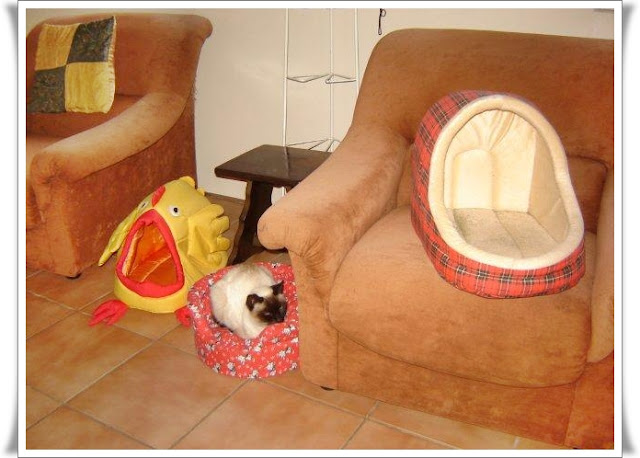 There are now two armchairs and three cat-beds for the four cats. The tartan "carry-cot"  belonged to Shadow but he didn't need it here in the warmer climes so it was donated to the home-cats 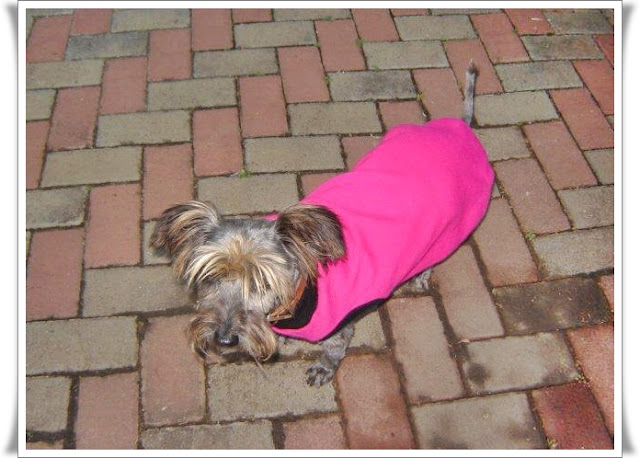 We had Megan clipped the day before we left SA. Here she is with her bright new winter pyjamas to keep her warm while her fur grows again 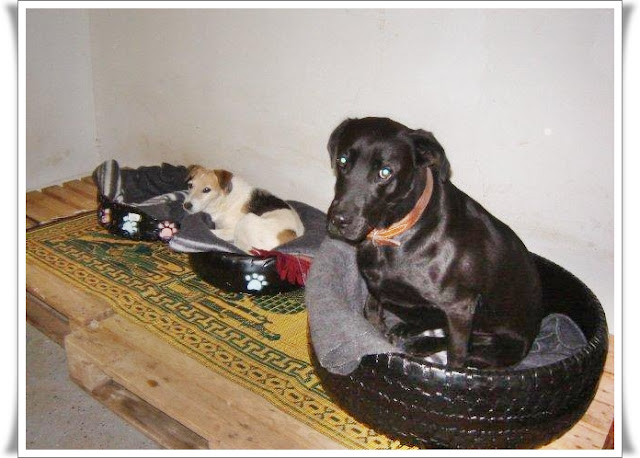 I was thrilled to find these tyre dog-beds in a pet shop. Each is lined with carpeting, I added a thick winter blanket so these make perfect beds for dogs. I took this photo just after the dogs had had their injections, hence the suspicious looks on their faces!
On a different and very sad note:  a few weeks before we went home, Clarice, one of our cats died. Clarice jumped into our vehicle in February 2003 while collecting our dogs at Albie's kennels (where Shadow stayed recently). When I asked Albie whose cat it was, Albie said she had never seen it before. We borrowed a cat carrier from Albie and took Clarice home. When I had her spayed a few weeks later, my vet estimated her age at about a year. So this year Clarice was nine years old.  Emily said that one Saturday morning she fed the cats as usual and Clarice was there and ate well. On Monday morning when Emily arrived at work, she found Clarice dead on the doorstep. All we can think is that Clarice, who was an excellent ratter, ingested a poisoned rat. Rest in peace, dearest Clarice. 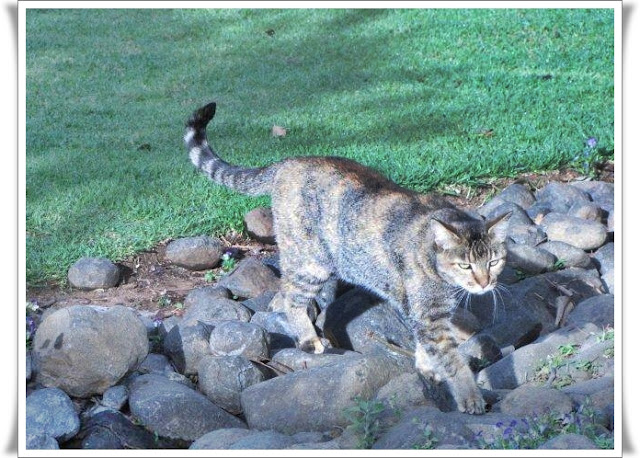 Clarice, our gentlest and best-natured cat, died in April this year
Posted by Jo at 3:30 AM