Six weeks ago I noticed two well-fed dogs lying outside Chebutie Club. At the time, Stanley and I walked the few hundred meters to the club;  I wanted to find out from Maggie, the club manager if they were her dogs. When we drew nearer, we saw that although the dogs were certainly much fatter than other local dogs, (they had to be, as they were fed all the left-overs from employees meals served in the club) they were both riddled with ticks. In fact, the smaller of the two, a yellow cur had ticks literally dripping from his ears, body and tail. This dog slouched off into the bush when we approached. When I spoke to Maggie, she said yes, they were her dogs and she loved them. I then told her that I'd brought for her pour-on medication for the ticks . She was thrilled and once I explained how to apply it (break the top off the vial and apply the contents in between the dog's shoulderblades) she said she'd get the security guard to help her that evening.   When I asked her what their names were, she said they had no names. So I said well, why don't you call the larger dog Mbwa moja (dog number one) and the yellow dog could be Mbwa mbili (dog number two). She was thrilled and said from now on that would be their names!
Last week I visited my vet in Eldoret for deworming tablets for our cats as well as Frontline treatment for ticks and fleas. I also asked for the same for dogs.


On Monday I dewormed our three cats and applied Frontline. (I was off the cats' list of favourite people for a couple of day, LOL!)


On Tuesday I packed a tin of cat food, two dessert spoons, the canine worm tablets and Frontline into my basket and Stanley and I walked down to the club. While walking along, I said to Stanley that I thought the yellow dog may have died since we last saw him. He agreed and said he remembered that the dog was "vurry eel". Imagine our surprise and my delight when we walked into the club yard and the first dog we saw, was Mbwa Mbili. He had filled out since I last visited and his coat was thick, shiny and tick-free!


When Maggie emerged from the clubhouse, I congratulated her on the healthy state of her dogs. I then gave her two more vials of Frontline which I suggested she applied in a couple of weeks' time. I showed her how to crush the worm tablets between two dessert spoons, gave her the cat food with which to mix it, and said she could feed it to them immediately. I look forward to seeing these two dogs a few weeks after the deworming. 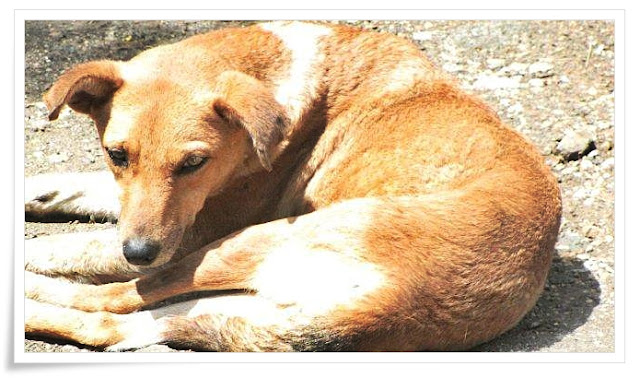 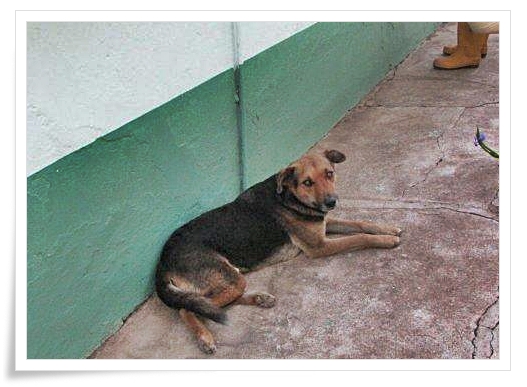 Mbwa moja looking fat and healthy as well
It's been on my agenda to have a ladies' tea on camp. Sharda had just arrived back from her break in India and Sue was off on theirs in New Zealand (going to watch the World Cup Rugby live, lucky fish!), I decided to have it that afternoon.  After returning from the club, I invited Sue and Sharda - only other two ladies on camp - and Sharda's 12 year-old daughter to High Tea at my home. I quickly baked a corn bread, apple and carrot loaf and a batch of buttermilk scones. I also prepared small individual dishes of apricot jam, butter curls, whipped cream and whole figs in syrup to eat with the scones and corn bread. 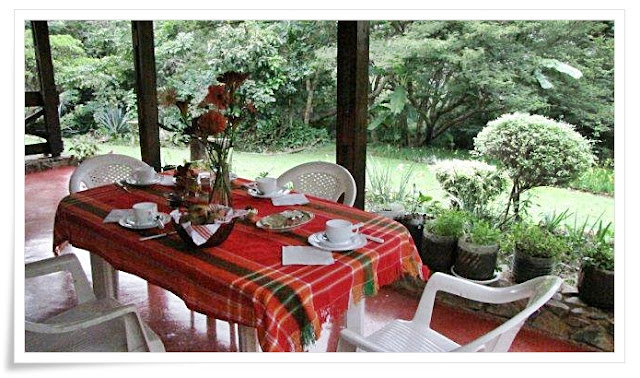 After lunch I spread a new kikoi over the veranda table and placed a huge vase of freshly cut flowers in the centre. I set out four cups, sauces and side plates. (no mugs please!) as well as a teaspoon, knife and serviette at each place. 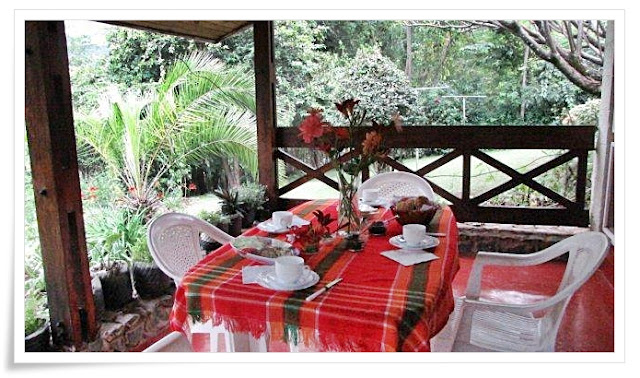 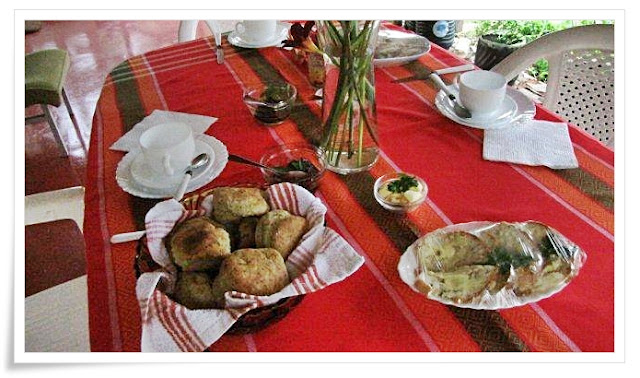 The table setting out on the veranda just lent itself to a lovely afternoon of ladies enjoying tea together!
Promptly at 3.30 I heard voices in the lane behind my house. Sharda and Sue - the latter sporting a beautiful hat decked with fresh flowers- arrived bearing gifts! Sue brought me a potted plant and Sharda gave me a bunch of fresh flowers as well as gifts she'd bought on her recent break in India. Monisha, who had been tested positive for malaria that morning, stayed home two doors down the lane. 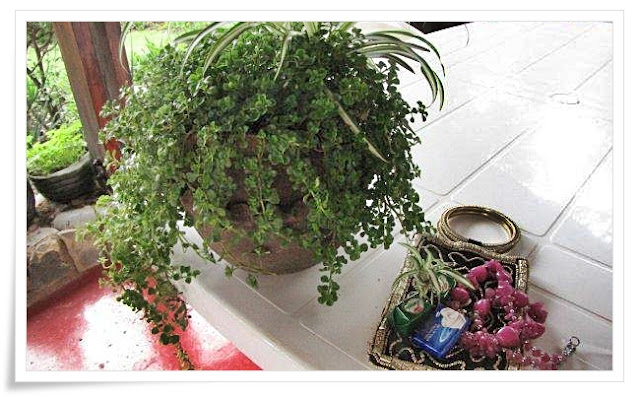 A lush potted plant from Sue's garden (I don't have this fine-leafed specimen), and an evening bag, colourful beads and chocolates from India 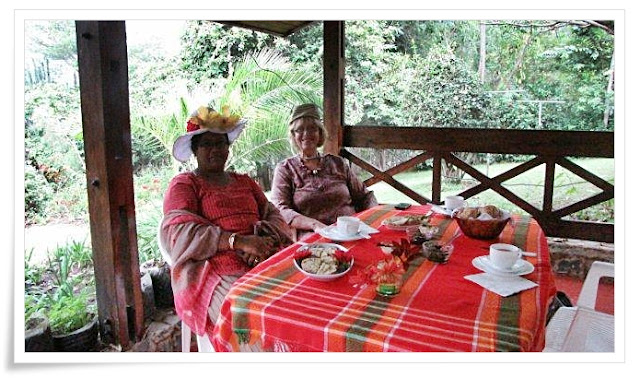 Somehow my camera settings were not right but I think you get the general idea. We had a wonderful afternoon of tea, eats and non-stop chatting ! Sue insisted Sharda wears the hat for the photo. She's wearing the remainder of my straw hat which has been chewed by Ambrose 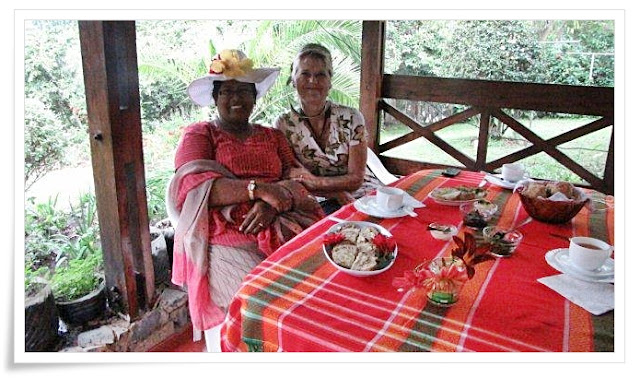 Sharda looking beautiful in, Sue's garden tea hat while I wear the "pillbox" remainder of mine
Wednesday, 31 August, being Eid al fitr (end of Ramadan) was declared a public holiday in Kentya. Grant worked until mid-afternoon and then came home to take me birding. We spent an age watching a Paradise-Flycatcher (white phase) trying to impress a female. Grant tried, without much success, to photograph the male who flitted about continuously in the thorn scrub. Along the road I spotted a Pale Flycatcher hawking for insects. I have many photos of this particular flycatcher and concentrated on photographing it in flight. I did! (I'm not gloating, promise!) 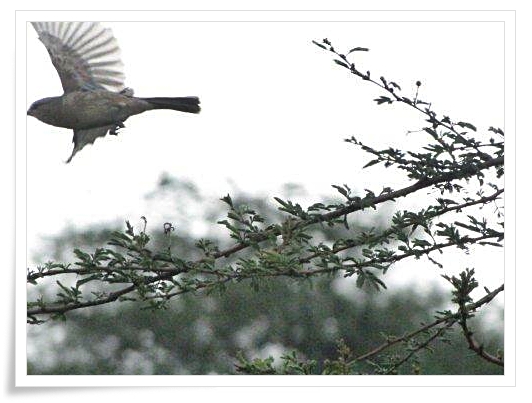 Pale Flycatcher hawking for its dinner


On Thursday we drove up the mountain to Eldoret. We were off to Immigrations to finalize our business armed with the correct documents this time. 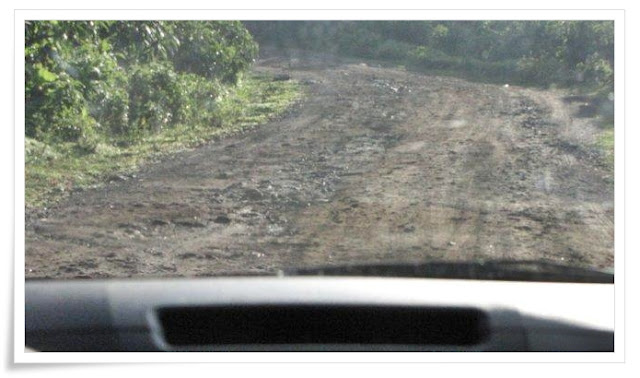 Up the winding, rutted gravel road to the top of the mountain!
I'm pleased to announce that the Immigrations officer was very professional, taking our fingerprints and completing our forms within an hour.  It was a different official from the one we dealt with last week. This one didn't require, want ask for the documents we'd painstakingly acquired from the company HR!
By mid-morning we were trundling back down the mountain road to the mine in the valley far below.  We spotted Colobus Monkeys again and Borries managed to get some very good photos. 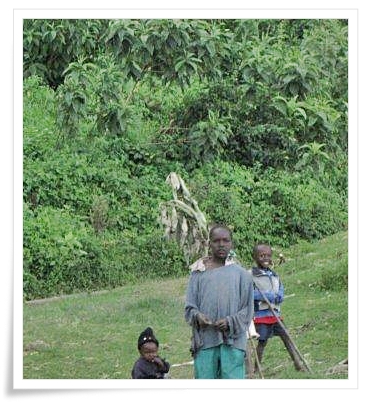 These children were standing on top of a bank below which their mother sat cutting stone chips. I didn't photograph her.  I don't think I'd like to be sitting there in the sand, hands bleeding  while a Mzungu (foreigner) focusses on my plight 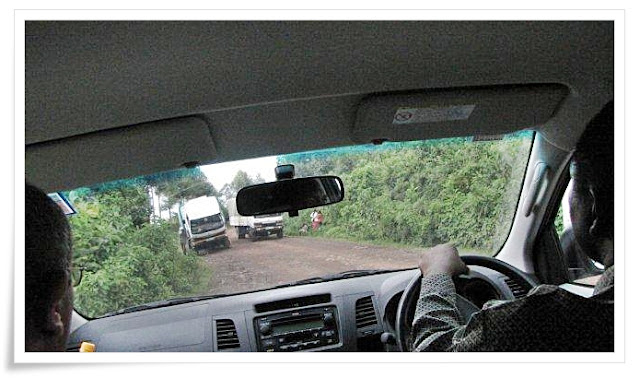 A little further down the road we came across a very familiar sight: a truck engine being overhauled on the side of the road while the passengers wait patiently for their lift to be mobile again. These trucks are all contractors and transport Fluorspar from the mine to Mombassa. At the same time they take people (for a fee of course) from the valley up to the villages along the way or Eldoret on the main road
I was busy studying my English - Swahili dictionary and would've missed the next sight if the men hadn't mentioned it: 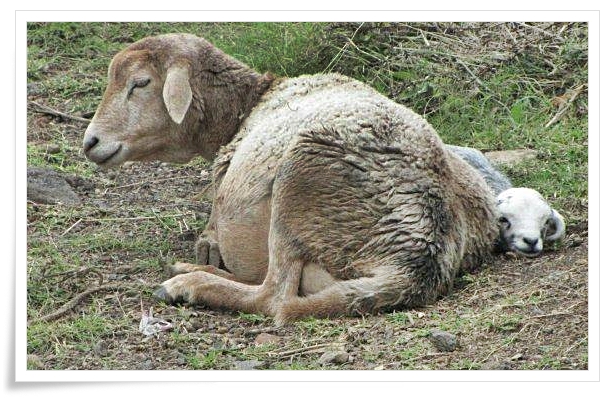 A newborn lamb tucked away behind its mother!
As this post is aired today, Grant and I will be driving up the mountain (again!) to Eldoret. We catch the 9.20 Skylink flight to Nairobi. We 'll wait around on the airport (drink copious cups of coffee at Java Coffee House and "people watch"!) until 16h00 when our SAA flight leaves for Johannesburg. We stay over in Johannesburg and tomorrow (Sunday) we catch the domestic flight to Bloemfontein. We're being met by Amanda's sister and brother-in-law who'll have our Nissan ready for us to travel back to our home in Marquard 160kms to the East. Till I log on again on Monday, bless you all! ﻿﻿
Posted by Jo at 3:30 AM