Birding around Mwadui and in my garden!

Earlier this week I posted about a ride around the mine on Saturday and a trip to spot birds in the bush outside Mwadui on Sunday evening. The first day I was thrilled when Grant stopped just inside the mine for me to photograph a kingfisher on the power lines above the road. Although not the first time that I see this bird, or even photograph it; it was the first time I managed to zoom in properly and get several beautiful clear pictures. Behold my first-ever clear photos of a ... 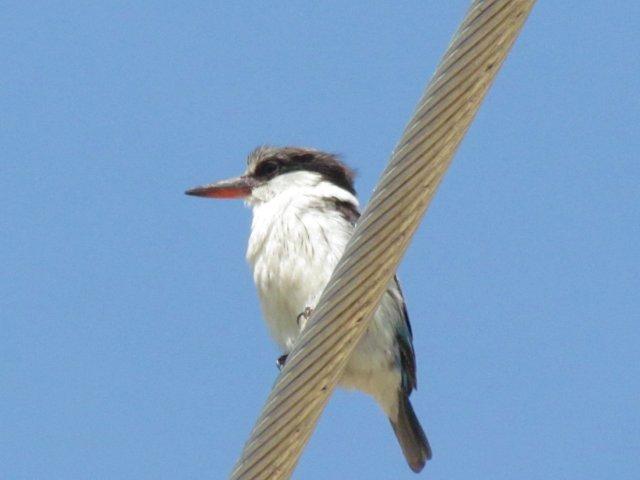 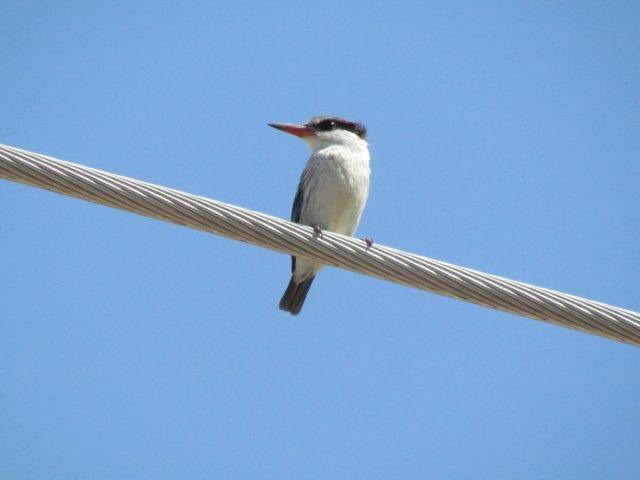 And again. Isn't it a beautifully clear image? I am so thrilled with these photos, I just have to show you ... 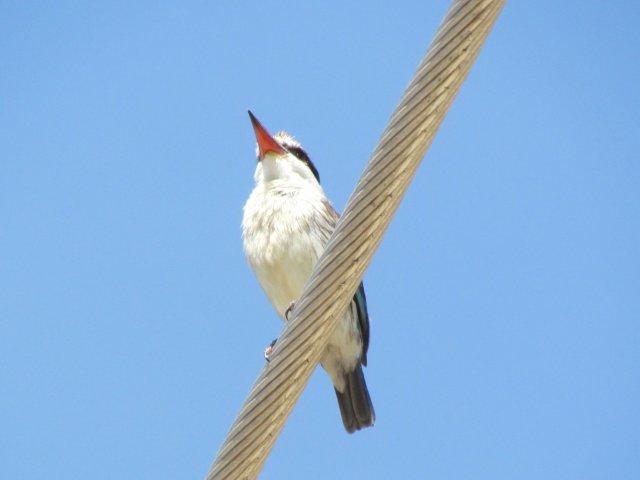 On Sunday, as I posted before, we had real lean pickings in the birdwatching section. However, Grant, Wessel and I enjoyed the ride out into the African bush and I even managed to take some lovely photos of the trees and lush countryside now that summer is upon us. On the way back, Grant drove along the airfield towards town. And there in the middle of the strip was a strikingly beautiful bird strutting along obviously feeding on insects on the ground.

Once again Grant stopped so that I could get photos. Although I knew this was some type of plover, I had to wait until I got home to identify it in my African bird book. 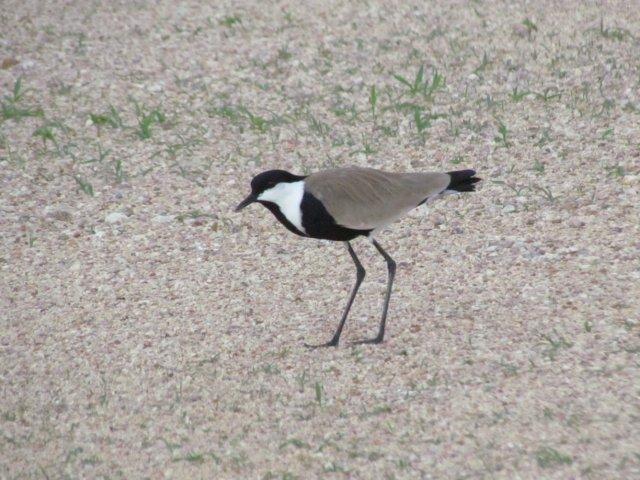 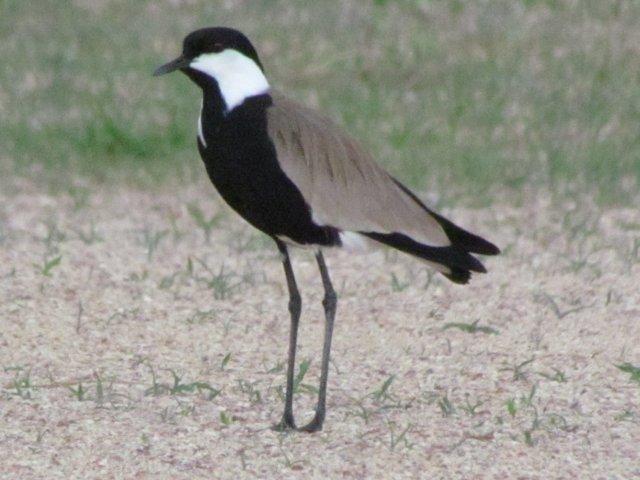 Even though I took several photos, I was unable to catch the glint/light in the bird's eye. I realized why when I read in the description that it has dull red eyes!

Back home this week,  I heard the early morning call of the Grey-headed Kingfisher. As soon as I could, I headed out into the garden with my camera. But no matter how long I waited under the tree where I could hear it calling, I just could not manage to see it. Michael, who is relieving Askari Edward while he's away, called me to see an ndege/ bird at the back of our house. I tiptoed along behind him until he stopped and pointed to the orange tree! An African Paradise Fly-catcher, which is prominent and resident in our garden, was sitting on its nest. This bird is a distinctive bird; the male has a blackish-blue head with a bright blue bill and eye-ring; the back and long tail is chestnut and the underparts of grey. The female is similar but has a duller eye-ring and bill and a shorter tail. Both the male and female take turns to sit on the nest.

I took photos of the male sitting on the nest. I saw that he was quite suspicious of my presence and took care not to show myself too much and so disturb him. After lunch I couldn't wait to show Grant the nest and I was delighted to see the female sitting on the nest this time. Of course, I dashed back into the house for my camera and took photos of her too. Take a look at the unique art of camouflage and sharing of parenting in this breeding situation. Note too, the differences between these two birds in my photos below. 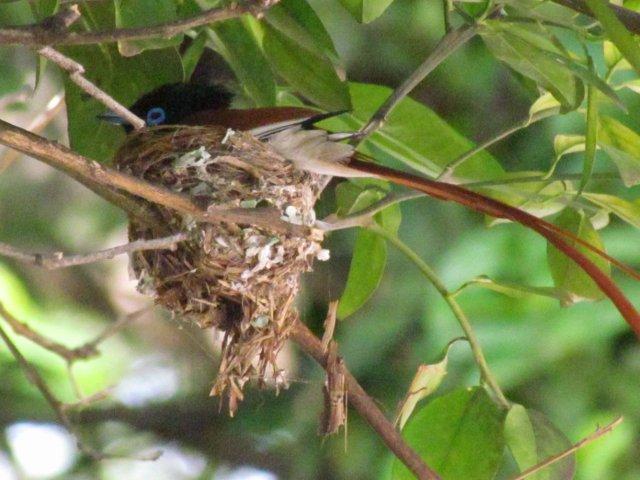 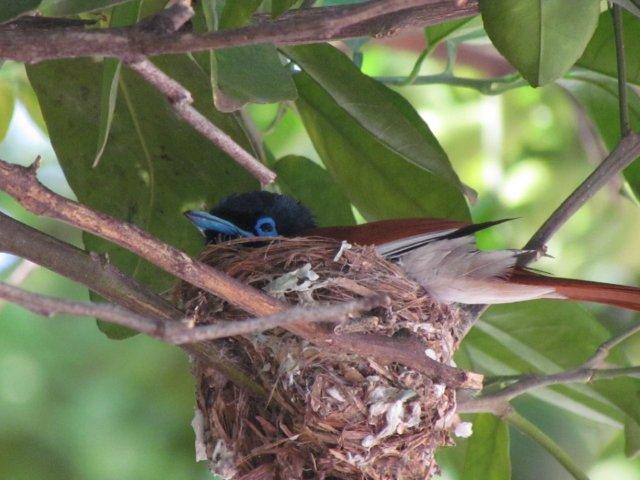 The male was quite suspicious of my presence so as soon as I had a few photos, I left him in peace! 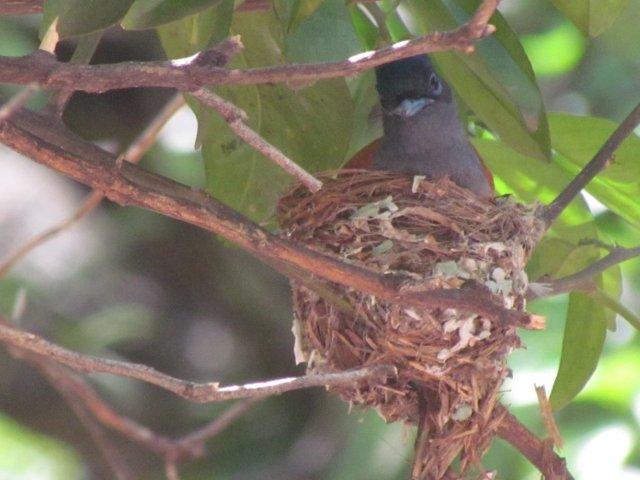 African Paradise Flycatcher takes her turn on the nest 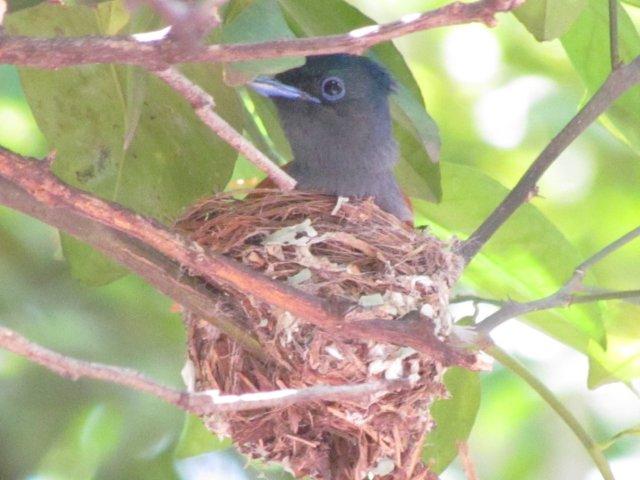 Although she kept her eye on me below, she was a lot less suspicious than her mate!
So this is my story about the fantastic birds (even though only a few) that we saw in and around Mwadui this week.

I hope you're all having a great day.