During November, Grant and I decided to hang a  bird feeder outside our lounge window. Not just an ordinary bird feeder; a Sunbird feeder. We've had sunbirds flitting around our windows since we arrived here. There's a hibiscus tree and a Frangipani just outside that window so the sunbirds visit these beautiful blooms regularly to sip the nectar.

I used an empty soy sauce bottle and filled it with a very sweet syrup mixture. I opened the slit in the plastic stopper under the actual bottle top. Then I opened the two side holes in the red screw-top lid on the bottle. Grant made a frame from copper wire, fitted it to the bottle with a length from the base,  so that it hung upside down;  the sunbird feeder was ready.

The spot I'd chosen was branch in the guava tree which is visible from the sofa in the lounge. My gardener, Mataluma climbed up into the fork of the tree and hooked the extra wire firmly over the branch. After thanking him for his help (he thinks this Mzungu Bibi / white grandmother is crazy wanting to feed the birds with sweet water, but what the heck, he did what she asked, so be it!) I went indoors sat on the sofa and waited. And waited. And waited.

A month later not a single bird had been near the bottle. Looking out one lunch-hour, Grant said he thought I should use food coloring as the birds are attracted by brightly-colored blooms in nature. Easier said than done. There is no food coloring available at the shops within 160kms of Mwadui! Eventually, when I returned from leave and was in Mwanza doing the monthly shopping for the  Guest House, I found food coloring at the supermarket in town. I bought four bottle of red and four bottles of green coloring!

Back home, Mataluma climbed the guava tree again and brought the bottle down. I washed the old syrup out, made a new sugar water solution and added a few drops of red food coloring. Taking it outside again, I decided to change the location of the feeder.   I'd seen the sunbirds flitting around our windows (going after their own reflections), so this time,with me instructing him,  Mataluma attached the bottle to the bar which hold the window fanlight open. I also picked two Hibiscus blooms and pushed them into the wire frame on each side of the bottle. (Can you picture Mataluma by now, shaking his head in bewilderment!)

I came indoors once more and sat down on the sofa. Within a few minutes the pair of sunbirds flew towards their favorite spot at the window and stopped! The male flew back up into the tree and perched on the branch. The female hovered over the bottle cap for a couple of seconds and then she took a sip! Another five seconds and the male swooped in to see what his wife was up to and then he sipped from the opening in the other side of the red lid. (Trust a woman to discover a treasure like this, ha!)

The next day I prepared another soy sauce bottle with syrup and this time I added quite a few drops of green food coloring. This time I managed to place one foot onto the small ledge running along outside our house walls, wedged my other foot against a nearby tree for balance, and hung the feeder on the other window in our lounge. This one runs at 90 degrees to the first window. I added two bright Hibiscus blooms and came indoors to wash my hands. (Feeding sunbirds is a sticky business!)

Once again it was the little female sunbird who discovered a second source of food. As she swooped in to drink from the small hole in the red cap, the male flew in and took a sip from the other side.

Then I went a step further. When he's home, Grant parks his vehicle at the front door. Immediately the sunbirds alight on his rear-view mirrors and begin to talk to their reflections. While Amanda had tea with me one morning and we watched the birds at the feeders, she suggested I hang small mirrors behind the bottles. I bought two mirrors and hung them up. Now the birds not only have the most delicious food available at the Hedges house, they also spend ages making kissing (tsssp/tsssp) sounds at the mirror!

What fun these little birds are providing. I spend ages trying to photograph them but it's not easy with the glass reflections. They're also quite nervous and fly off at any sudden movements in our lounge. I have several photos which I'll post here.

Oh, and we struggled to identify these specific sunbirds. Fortunately I had a reasonably clear photo which I sent to my sister-in-law in South Africa and she sent us the correct name. It's Marico Sunbird.  Thanks Shell! 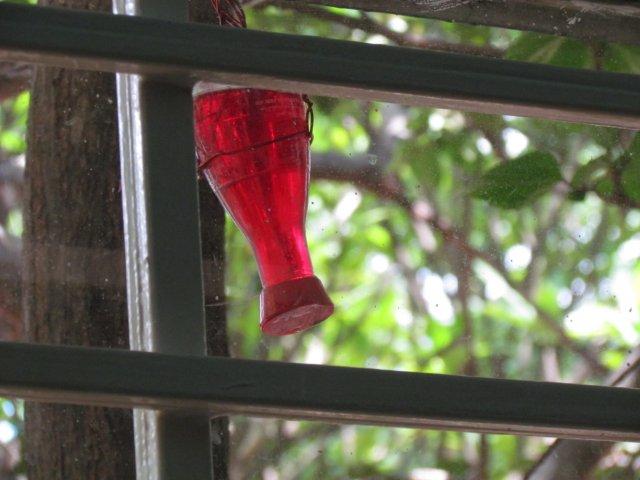 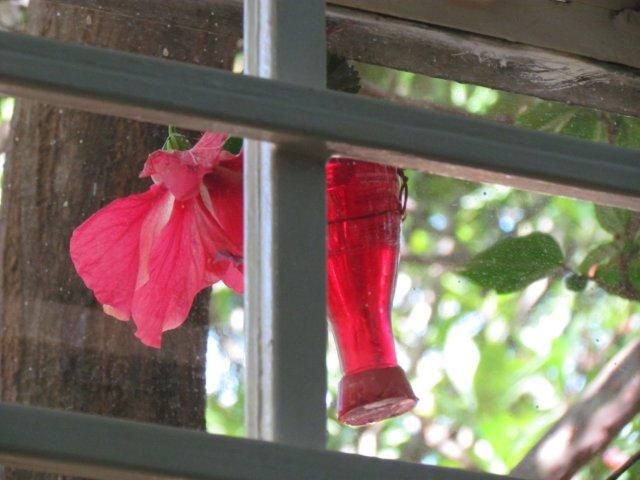 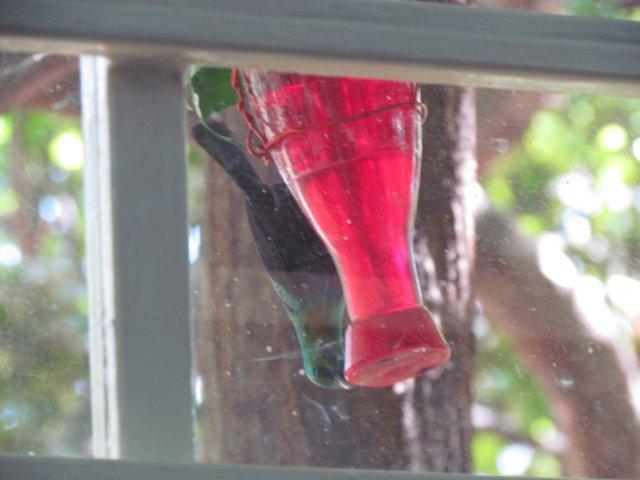 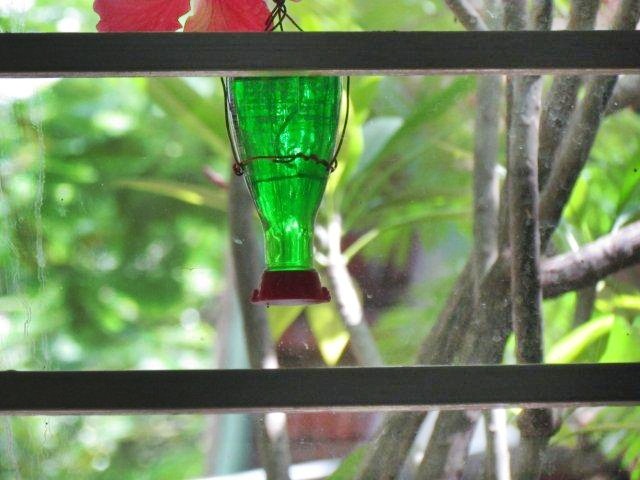 The bottle of green-colored syrup on the other window 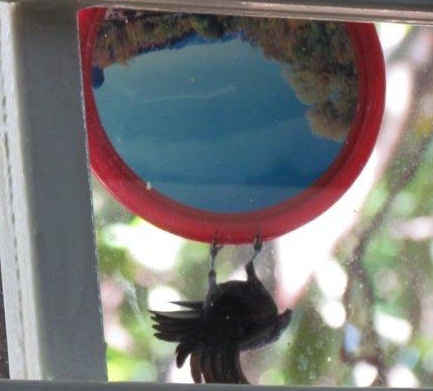 Suspending a mirror to each bottle, added even more pleasure to the Sunbirds' visits! 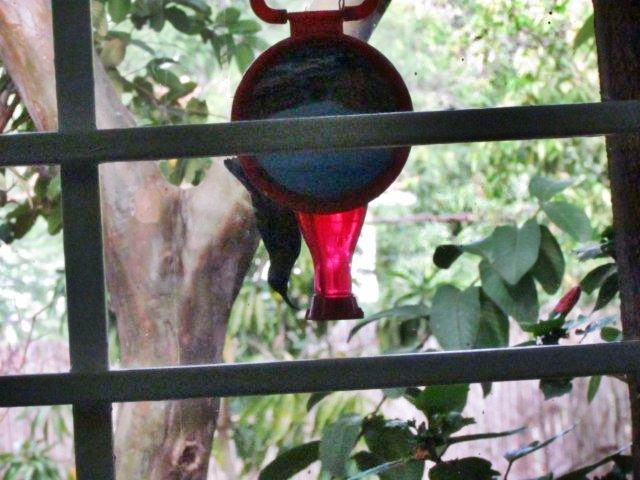 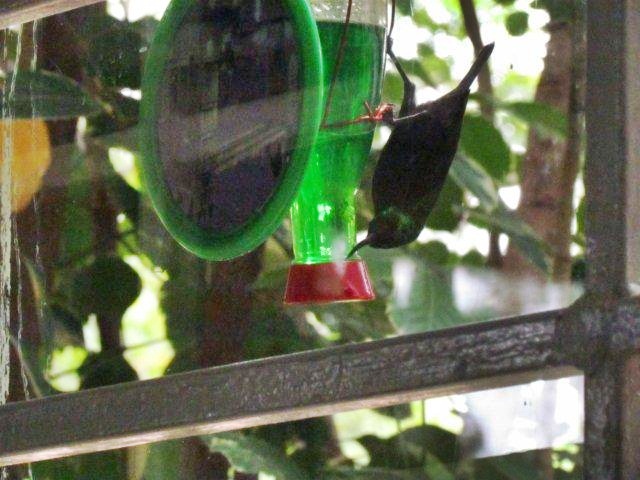 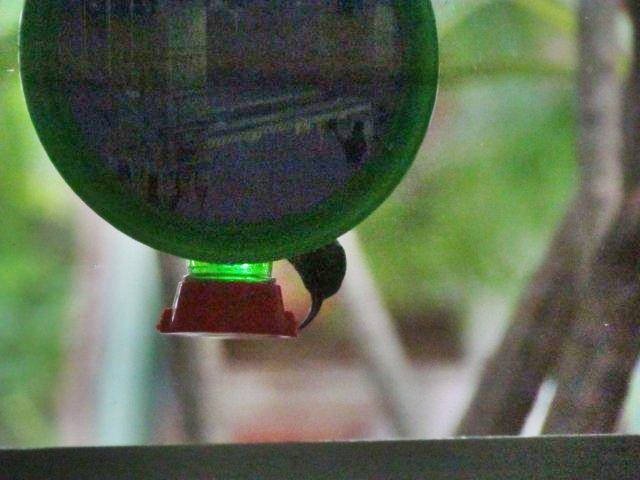 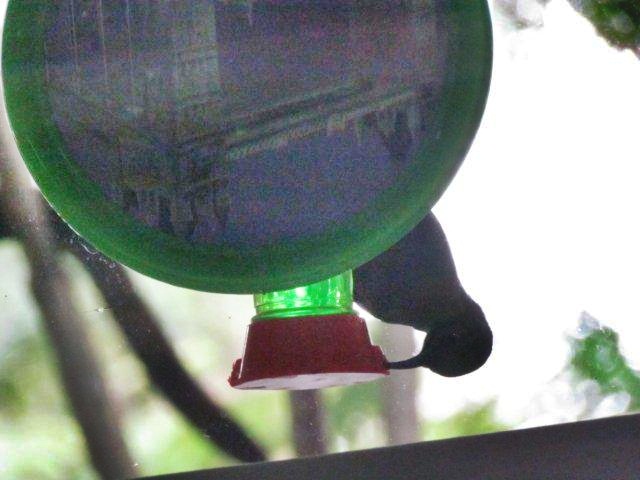 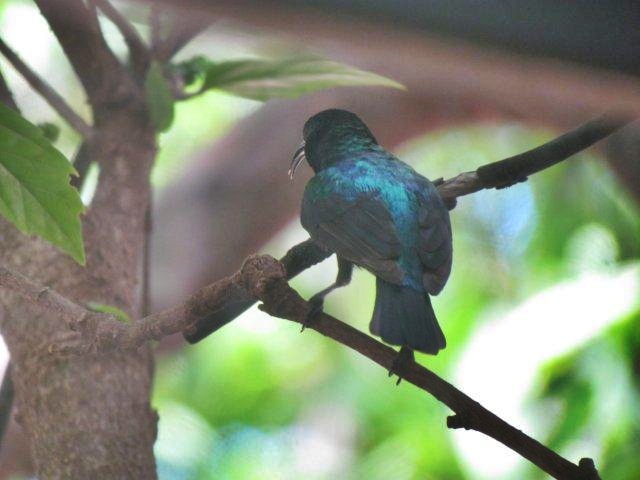 I love this photo: you can see the drops of syrup on the Sunbird's bill 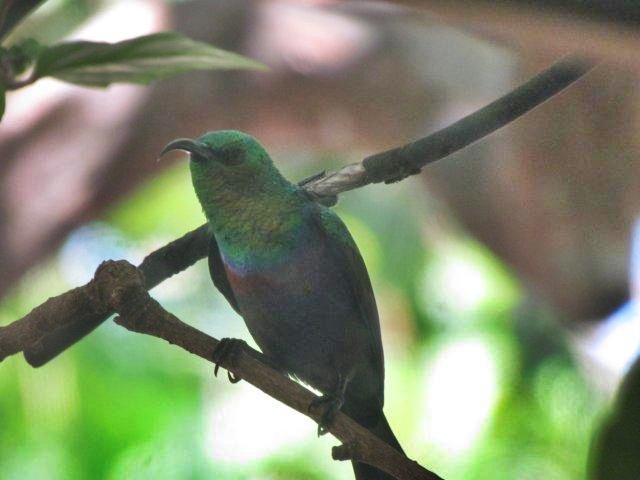 Above is the Marico Sunbird male. Although the female is always at the feeder along with the male, I've not managed to get a photo of her yet

Watch this space for more photos of the sunbirds at the sunbird feeder!

Here's to a great weekend for you all.