The Hedges birthdays culminated in a get-together with a pig-on-the-spit at the client club on Saturday night. Good friend, Rob - and maestro cook and especially with this particular way of BBQ-ing meat - prepared and roasted a pig outdoors for the occasion.

As with all South Africans pursuits of this kind, this turned out to be a wonderful day of camaraderie and fun in the sun. At 10am Grant took our young chef, Armani up to the guest house grounds, complete with two huge bags of charcoal for the fire, olive oil and salt for the continuous basting throughout the cooking process. Rob met them there and within the hour,  the pig was trussed with wire, suspended over a drum and starting to roast slowly. Instead of having coals in the drum below, Rob has four upright cages filled with coals. These are moved closer or further from the meat while the carcass is turned by way of a pulley at intervals. 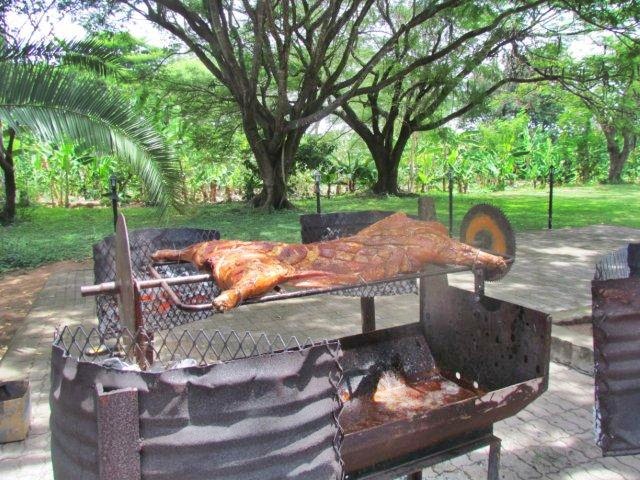 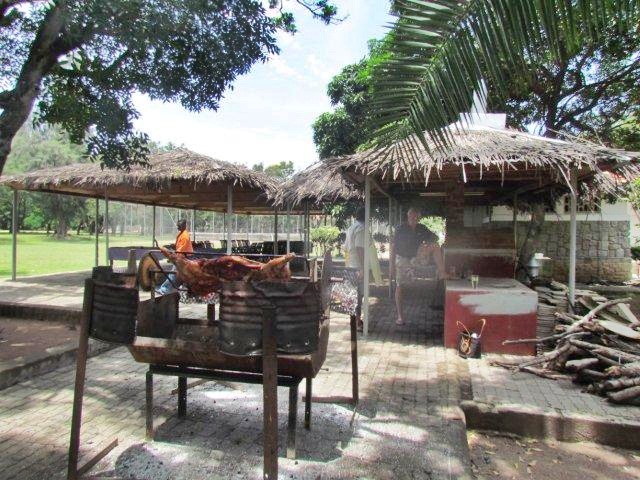 Grant and Rob chat under the reed hut. Armani is also visible in the background 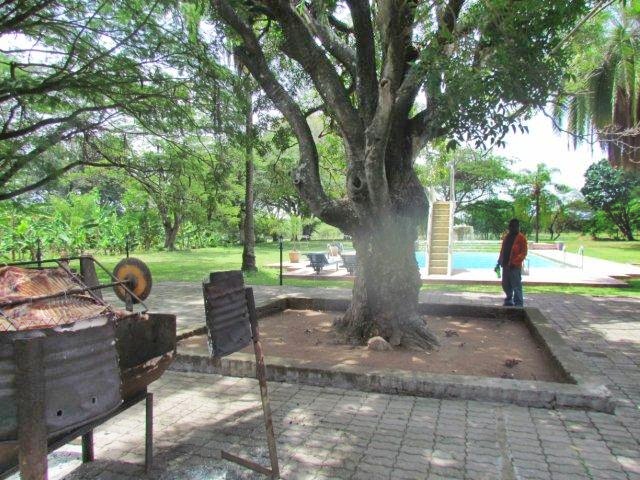 Armani enjoys a soda in the shade 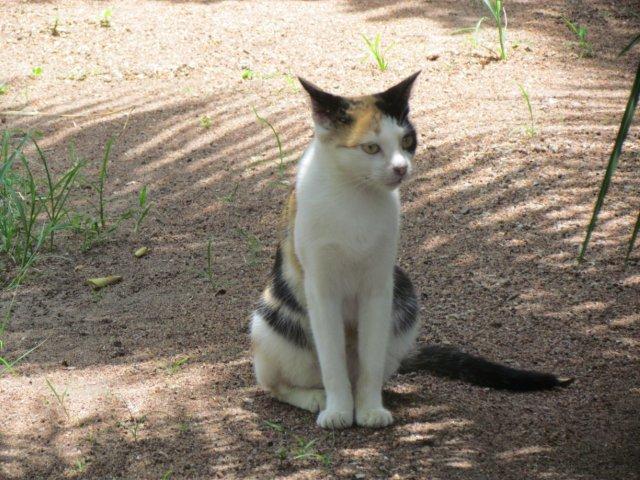 Very soon a couple of stray kitties followed the smell and sat around hoping for tidbits! 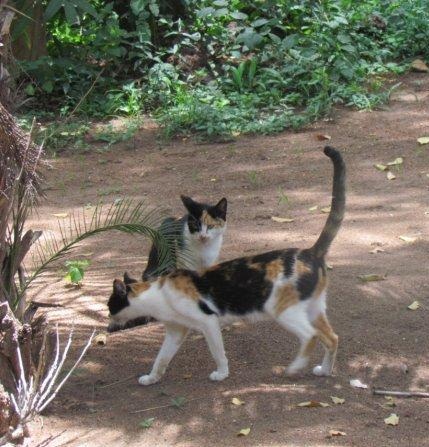 That night, after everyone had eaten, I found quite a few small bites of pork which I put out for them

I joined the men around midday when I took them their lunch. A while later, Andre and Amanda arrived and soon she and I were lazing in the shade and watching the proceedings. 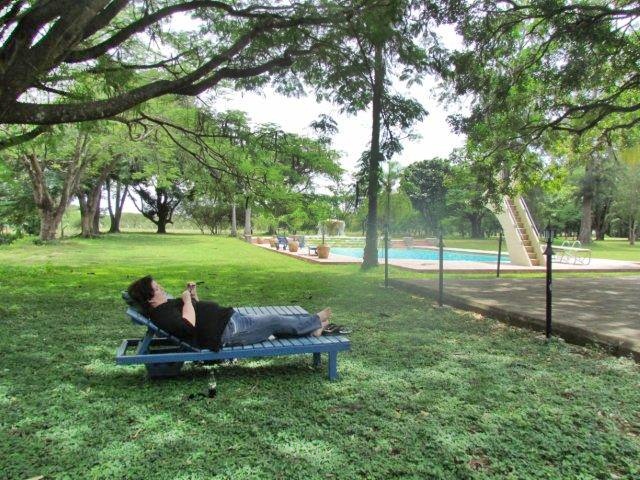 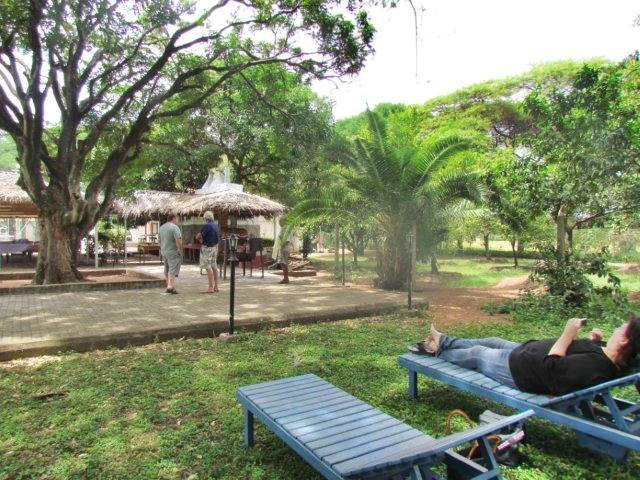 and the living is easy...

Amanda has downloaded an application on her Smartphone: Camera Lover Pack 5. She had great fun photographing various subjects; not least, yours truly!

Amanda took several photos, starting with my paraphanalia spread around me on the lounger. Note the unwrapped lollipop just behind my camera! 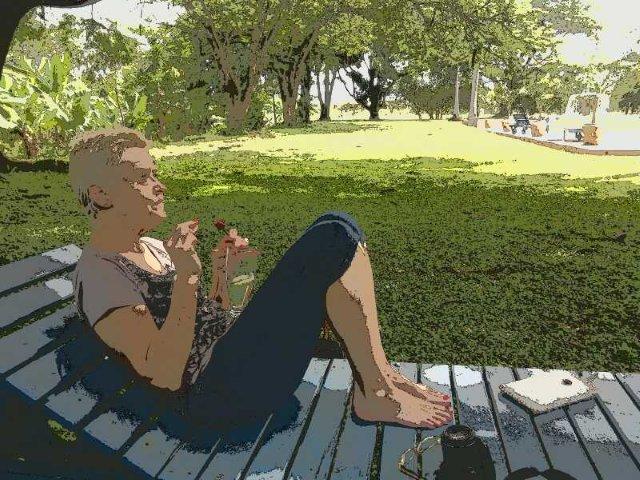 Here I am enjoying the lolly which you see in the photo above!

By 5.30pm the guests began to arrive at the club. The pig on the spit was a great source of conversation, as you can imagine. 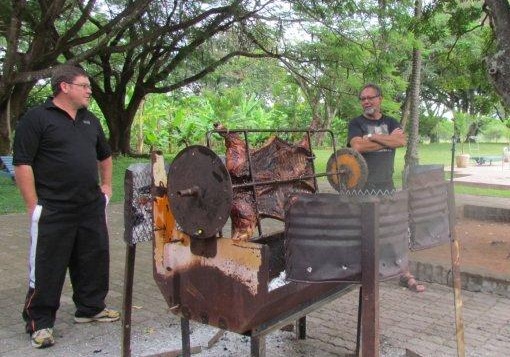 As the guests arrived they gathered around the fragrantly roasted pork 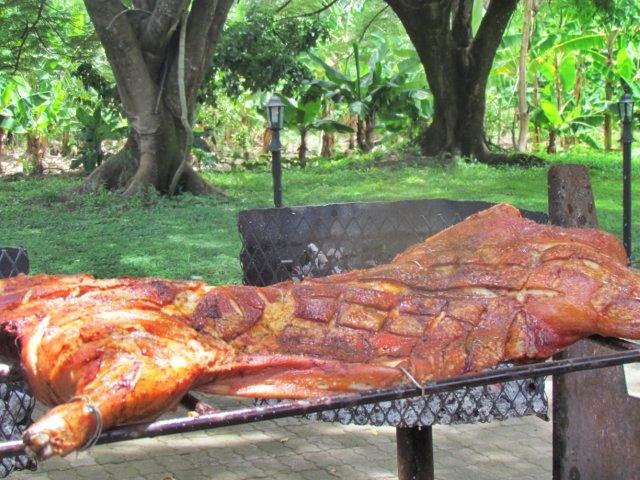 Just after 6pm, Grant and Rob removed the pig from the "spit" and proceeded to carve it up. As they filled up,  I carried the platters and dishes of succulent pork to the table. Soon we were ready to eat. Everyone moved around the table and helped themselves to meat, apple sauce, sweet mustard sauce, potato salad and a tossed green salad. I'd made focacia (flat Italian bread) which we broke off in chunks and ate with the meal.  Later I served a hot baked pudding and ice-cream.

*Sigh* another tough day in Africa!
Here's wishing you all a wonderful week ahead.
Posted by Jo at 3:30 AM