Meeting old friends on the veranda

Since I've had the art shop, I have had several friends pop in to see me. Originally it was because I advertise the shop extensively on social media. See here .

More recently however, several friends have been on holiday and especially looked me up to commiserate since Grant's passing. In February, Jill and Jimmy Londsdale from Monzi, Zululand (where Grant and I lived for 11 years) popped in to see me.

The day before my birthday in February, a man approached me on the veranda where I was straightening an item on my display table, and asked where the restrooms were. As I looked  around, I shouted :Norman!  He and Hester, who later emerged from the shop next door, are related to BIL and SIL in Marquard so we consider ourselves family. 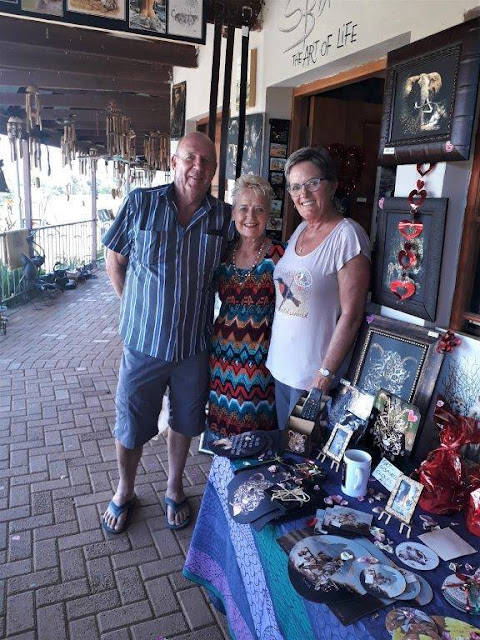 Last week a young man approached as I was seeing to kitty on the veranda steps and said: Hallo Aunty Jo. It was Nicos, our neighbor while we lived in Marquard. Later on he brought his wife, Annemie and we spent a good half-hour talking about Grant. They were both very fond of him. Incidentally, last year in August, Nicos phoned Grant and after a chat, he asked to speak to me. Between 2000 and 2005, I ran Weigh-Less groups in and around Marquard. Nicos achieved his goal weight through my groups and remained on target until approaching middle age (he's 38 now) when he was challenged with extra weight. Meanwhile, he and Annemie had been together for nine years and they'd decided to tie the knot. He enlisted my help to get down to his goal weight (to lose 12kg / 26lb) before his wedding in six weeks' time.

While I did. I sent him recipes, tips and hints via Whatsapp. He, in turn, weighed himself once a week and sent me his losses. I don't think he ever had a gain although he would've sent this through as well. A week before the big day, he sent me a WA saying he was on goal weight. After congratulating him, I then sent him a maintenance plan.

This and many other things, is what Annemie, Nicos and I discussed last week. Nicos, though, says after a week's holiday in the mountains, he feels he needs to get back on track. So I offered to send him the hints and ideas to help him shed the extra weight.

With Jill and Jimmy and Nicos and Annemie, I clean forgot to take photos . So when Sally and Ray arrived to see me on Saturday, I called Charmaine to take photos of us. 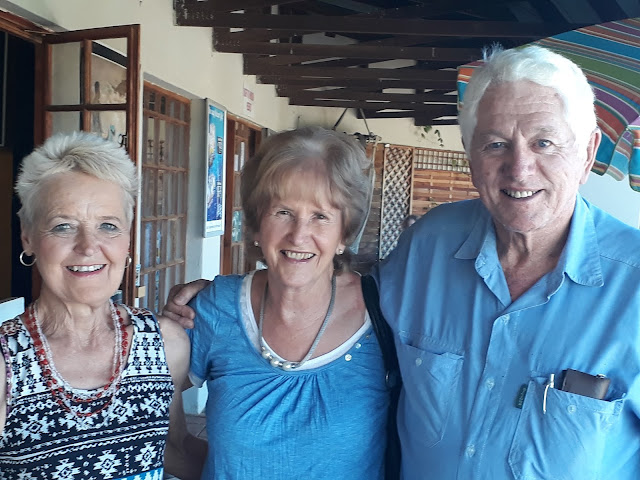 While our boys were growing up, Grant worked for Ray on a sugar cane farm in Zululand. We spent 11 years living and working there. While Sally and I caught up on friends, I noticed Ray and Charmaine deep in conversation with her showing him photos on her phone.  Charmaine,  who manages the off-sales next door, lived on a cattle farm for several years: breeding Brahman. Before Ray moved to Monzi in the seventies, he managed a cattle farm. So he and Charmaine had a great time discussing the merits of her herd.

Yesterday when Sal and Ray came to say goodbye after breakfast at the Purple Giraffe, I introduced them to Colette. Colette and he husband Bardy hail from Zululand and within  minutes, Ray and Colette had discovered people they both knew from that neck of the woods. While Sally and I chatted again, she remarked that Ray always connects so easily with people.

Have a wonderful Monday in your part of the world.