The first Thursday of the month and its the Probus meeting. As the newsletter editor, I take photos of members, especially new members and/or guests at the meeting. A job in itself - albeit most pleasant.  This meeting past I stood in as service manager  for friend, Lynette who was on leave. The task of service manager is far more involved than I'd realized. For ten days ahead of the meeting I have to remind members (who have already had an invitation and reminder to confirm whether they'd be attending Probus or not) to confirm! It's like pulling teeth. At cutoff date, I forward the numbers and our choice of menu, to the venue.  On the evening itself, I check with chef that he'd been  informed about the various dietary needs (no pork, the banting diet, gluten free diet, vegetarian etc)  and if everything else is on track.

After the business side of the meeting where  President Neil Crawford welcomes members and guests (I had brought two)  and reading the AGM report, it was time for the entertainment. At Probus we either have a speaker (always incredibly interesting) or entertainment in the form of a game of bingo or in this case, a quiz: musical and general knowledge. Interestingly enough, members shy away from attending the AGM - fear of being elected to office - and are terrified of looking foolish when taking part in interactive entertainment.

While living and working as expats on various and often most remote mines, you lose your shyness and partaking in entertainment. I have been the organist at a mock wedding (Grant was father of the bride; we've attended Burns Night, the men wearing their clan's tartans; women in long satin dresses (made in the village) and sashes to match the men's kilts. We've taken part in a mini Olympics using the swimming pool and various fields to swim/run/jump. Once the brief was to dress as a favorite character/actor/  I (Goldie Hawn) dressed up as Private Benjamin; of course Grant went as Peter Fonda's character, Wyatt  in Easy Rider) In between we had pub quizzes, wine tasting evening and beer festivals. So it wasn't a novelty for me to be part of a team of six people taking part in a quiz last week.

And what great fun it was. Each team was given a piece of paper and a pen. Then while the quiz master, Jacques  lit up a rear projection screen with the questions, his girlfriend, Claire, read them out aloud. We were sure that we had done very badly, especially when it came to the music questions. So great was our surprise when Claire called out the scores at the end of the quiz. She started with the losing team and when got to the second-to-last team's name, our team started to cheer and clapped. I think I even beat my hands on the table! 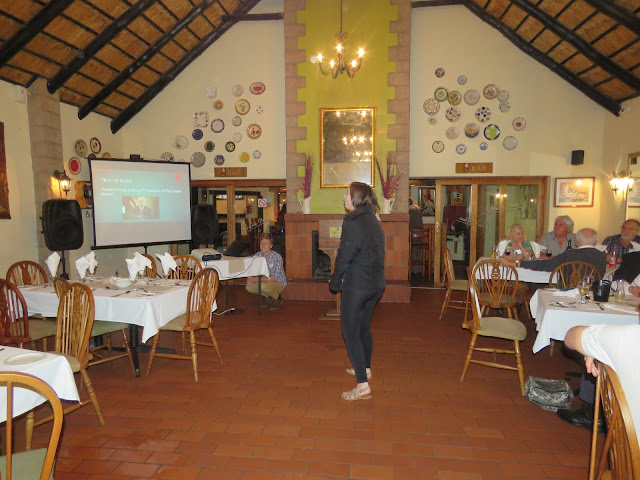 Quiz mistress, Claire reads the questions from the screen which her fiance, Jacques is controlling from his laptop 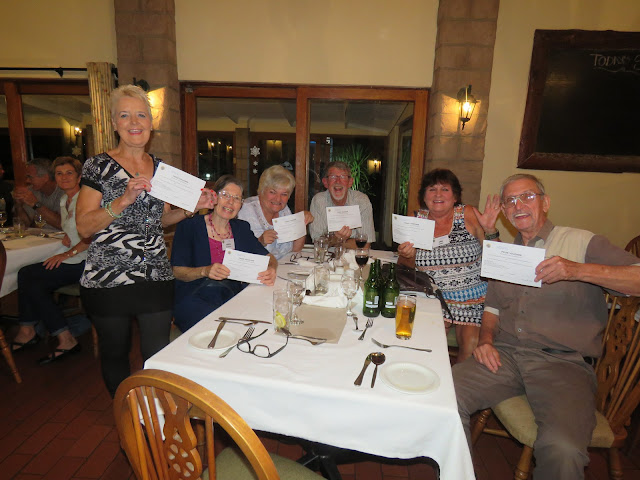 We each won a voucher from the local chocolate shop here along the veranda: handmade chocolate slabs embossed with the mountain peaks, beautifully presented in gift packaging. I gave one of the three slabs to my friends and landlords Ronnie and John (it was his birthday last month) and another to a lady who's going in for knee surgery tomorrow.

I hope you're all having a wonderful day.