A report back on the dogs and their owners who spent five days in The Bunker. It was successful and not so successful. They never contacted me at all; but if they had, I could've solved the problem they had. The owners of The Bunker have a huge house just out of sight of my accommodation.  It's also behind an electric fence so, although The Bunker patio and surrounds isn't fenced to keep dogs in, the big house is fenced which keeps the owner's dogs in.

The owners are in Australia for six weeks and obviously the garden staff don't always close the gate while they're working in and around their master's garden. The permanent dogs got out and while they're very friendly lads, they are obviously lonely and kept running to see the guests at The Bunker.

As I said, if they'd phoned me, I would have contacted the houselady to tell her to call their dogs into the big garden and to keep the gate closed.

The guests kept their babies on a leash while walking them around the huge estate but insisted that other than that, they had a great holiday. 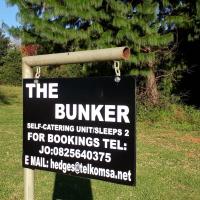 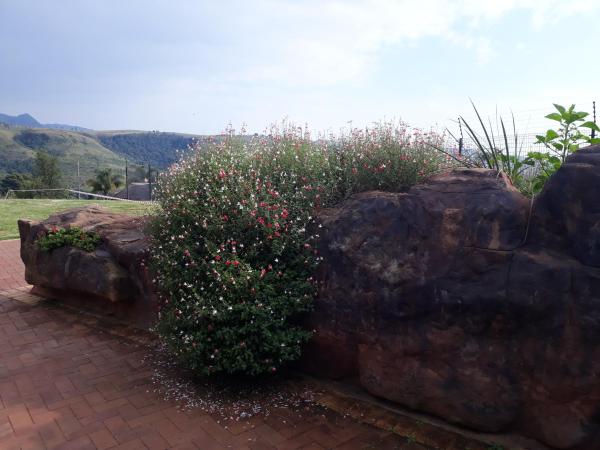 Just above the flowering shrub, the roof of the house next door is visible. The dogs belonging here, were lonely and kept running out of the open gate to visit the guests!

This morning I went up to The Bunker, stripped the beds, and remade them; swept the floor and washed it; washed down the shower cubicle and put out fresh towels and toiletries.

I finished around 8am by which time the head gardener had arrived next door. I approached him and asked him to ensure that the garden gate remains closed especially when there are guests in The Bunker. He promised to do this from now on.

On Sunday I have a couple arriving with a seven-month-old baby and two small dogs! I will ask them to contact me immediately if they see the next door house gate ajar. I am hoping the head gardener will make sure it stays closed for the week.

This couple will leave on Thursday morning and I've seconded Estelle to man the shop from 10am when they guests vacate. It's the start of Easter Weekend and I have guests arriving at 2pm

I also have a group of five adults and three children arriving to stay at Ulundi Family Holiday Home for the long weekend. Tomorrow  Bardy (Colette from next door's husband) will accompany me up there in the afternoon. He'll help me tell Paul, the gardener at Ulundi, how to treat the swimming pool to ensure it's beautifully clear for the visitors. I also need a man's advice on whether the gas bottles need replacing.

HAPPY FRIDAY TO YOU ALL !