Good morning dear Blogger friends. As the year draws to a close, the year end functions gather momentum. Ron, my neighbor, landlady, employer, Weigh-Less member and friend had a birthday on 20th November. Her daughter-in-law, Janine (my other neighbor, friend and Weigh-Less member) organized a breakfast at a fairly new boutique hotel  in the Valley. Jenna, my nail beautifier and friend and Ron's oldest granddaughter, had come up from the city bringing her maternal grandfather, Morgan,  with her for the weekend. 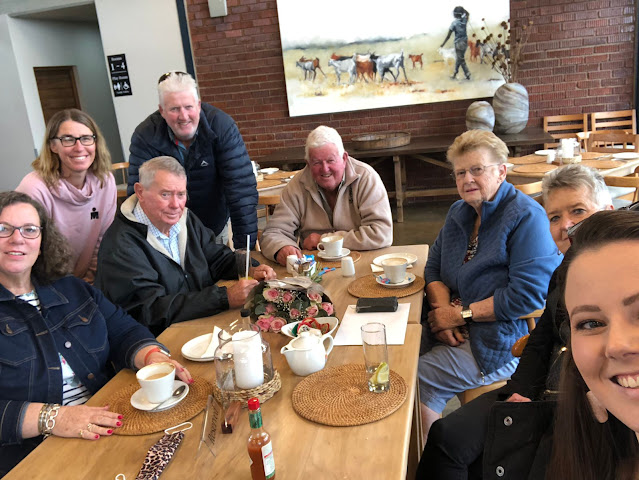 A great family gathering in honor of a gracious lady, Ron
The next day, a Sunday, was Steve's birthday and Estelle arranged a lunch for him with his closest friends and her two brothers and sisters-in-law. Steve is the artist whose work I promoted in a the little shop on the shopping center veranda for two years after Grant's passing. Now I work in the farm office and manage my other three businesses from the farm but the friendship between me, Estelle and Steve remain as strong as ever. Estelle is a Goal Weight member in my Weigh-Less group. She has brought her sister-in-law, Barbs to join since they moved to the Valley in October. She is the most loyal friend ever and MY mentor in my hospitality business. She and Steve are my close confidantes and have supported me emotionally for the past four years.   Steve also cuts my hair every month! 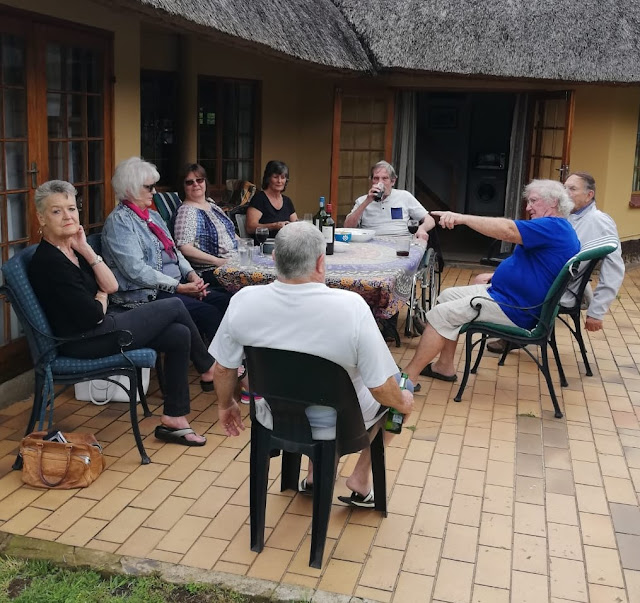 The lady sitting next to me and the man behind Steve (who is gesticulating while he relates an interesting yarn about the Valley). are the couple who own The Bunker 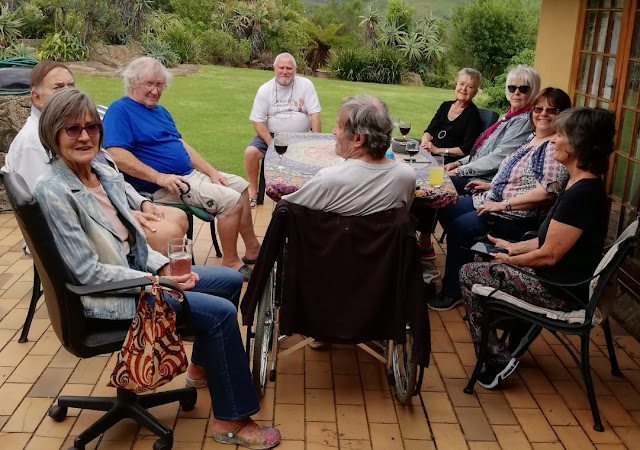 Caroline, bottom left of the photo, is the lady for whom Grant built the cottage (which we ultimately did not occupy!) Estelle is on the right of the photo; her brother, Raymond is in the wheelchair (he and Charleien live in the nearby town of Colenso); Brian, her older brother is opposite Raymond while Barbs smiles beautifully from the middle of the group. Another family group honoring a talented and kindhearted man as he hurtles towards the 80's!
Because I work three mornings a week in the office next door, I am only able to attend the ladies Taigelates** class on Fridays, run by Caroline. Because of the distance from the farm to the hall where the class is held, I only attend when I have work at The Bunker on a Friday. Once a year, the ladies all don dresses (instead of the ski-pants we exercise in) and get together for breakfast at The Valley Bakery after the first Friday class in December. 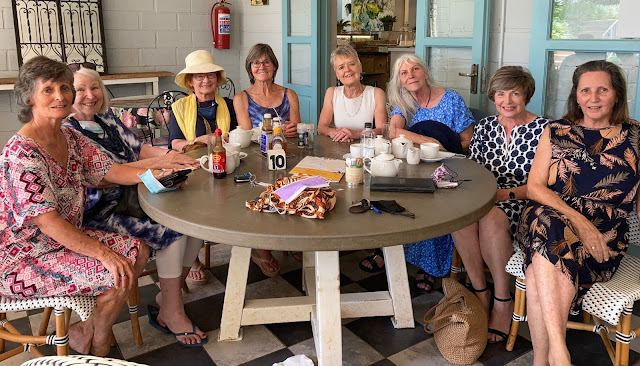 Estelle, bottom left of the photo and Caroline next to me
**NOTE: TAIGELATES is a combination of Tai Chi, Yoga and Pilates especially worked out every week by Caroline.
HI HO HI HO OFF TO WORK I GO
WISHING YOU ALL A WONDERFUL WEEK AHEAD