As promised yesterday I am posting about the other species of monkey which we saw on the way up to El Doret last Thursday: the Black-and-white Colobus monkey. 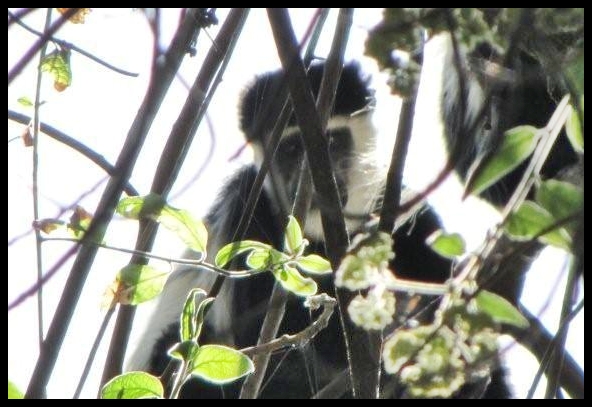 The Black-and-white Colobus monkey peers through the branches at us (Photo credit: Sue Spangenberg)
The name “colobus” is derived from the Greek word for “mutilated,” because unlike other monkeys, Colobus monkeys do not have thumbs.

Their beautiful black fur strongly contrasts with the long white mantle, whiskers and beard around the face and the bushy white tail. The Eastern black-and-white is distinguishable by a U-shaped cape of white hair running from the shoulders to lower back, whereas the Angolan black-and-white has white hairs flaring out only at the shoulders. 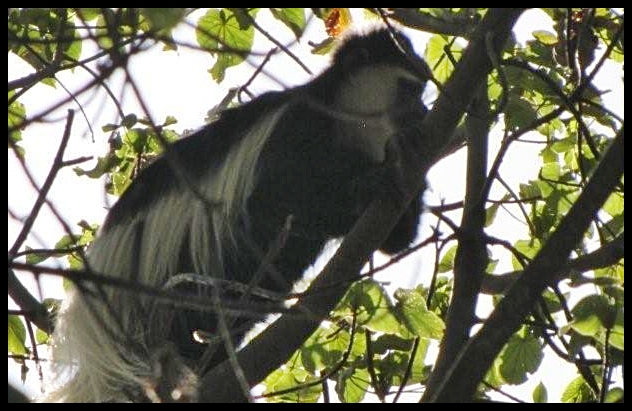 The Eastern Black-and-white Colobus monkey which we saw in the highland forests on the way up the mountain to El Doret (Phote credit: Sue Spangenberg)
The Colobus lives in all types of closed forests, including montane and gallery forests. Bamboo stands are also popular dwelling spots for the colobus.

The Colobus is the most arboreal of all African monkeys and rarely descends to the ground. It uses branches as trampolines, jumping up and down on them to get liftoff for leaps of up to 50 feet. They leap up and then drop downward, falling with outstretched arms and legs to grab the next branch. Their mantle hair and tails are believed to act as a parachute during these long leaps.

Colobus monkeys live in troops of about 5 to 10 animals: a dominant male, several females, and young. Each troop has its own territory which is well defined and defended from other troops. Adult troop members, especially males, make croaking roars that can be heard resonating throughout the forest.

Fighting over mates rarely occurs. There is no distinct breeding season although most mating probably occurs during rainy season. Because a female suckles her infant for over a year, an average of 20 months passes before she gives birth again. Other troop members often handle very young infants. In the first month when the infant still has a pink face, it may be handled three to five times an hour in resting groups. Infant mortality is high even though the young are carefully tended.

The newborn colobus monkey is covered with white fur, and at about one month gradually begins to change color, finally gaining the black and white adult coloration at about 3 months. The infant monkey is carried on the mother's abdomen, where it clings to her fur. As it matures it spends a lot of time playing with its mother and certain other adults and at about 7 months begins playing with other juveniles. The games they play exercise their bodies, and as they get older, these develop into wrestling matches and mock displays. Photo credit: Sue Spangenberg
Colobus monkeys are strictly leaf-eaters and spend most of their time in treetops, preferring to eat the tender young leaves found there. However, complex stomachs enable them to digest mature or toxic foliage that other monkeys cannot.
At one time the Colobus was hunted excessively for its beautiful fur, leading to its extermination in some areas. Its skin has been used to make dance costumes, hats and capes.

Today, the greatest threat to its continued existence comes from loss of habitat as forests are cut down. Since coming to live in the valley, we have witnessed regularly burning of the forest on the mountains. This is to in order for subsistance farmers to make fields to plant crops. The trees are also used to make charcoal for sale. Sadly the Colobus monkey's habitat is being destroyed daily. The large trees in which this beautiful primate lives, are being chopped down and thinned out as we watch.

The Swahili word for monkey is tumbili
Posted by Jo at 3:30 AM