In March, we'd heard from Liz and Neil, Dar es Salaam birding club,  who also id my birds when I'm stuck, that a keen birder, Kevin was studying here and would love to go out into the bush with us.

Grant collected me from home, but as we were driving off, Mataluma, the Guest House gardener came running up to my window. He kept saying I should come and see ndege mtoto/ baby bird. While Grant waited in the car, I got out and walked down the road from our house. When he approached a very densely leafed tree, Mataluma crept under the branch and gesticulated frantically for me to come in as well. I slunk in and looked up to where he was pointing. My heart almost stopped. It was the tiniest owl, sitting there asleep. I asked Mataluma to run up and tell Babu, which is Grant's Tanzanian name, to come down with the vehicle.

When Grant quietly approached, he also saw the cunningly concealed owl, but said it could be a Pearl Spotted Owlet which is one of or smallest owl. But an owlet doesn't have ear tufts and this owl has prominent ear tufts! 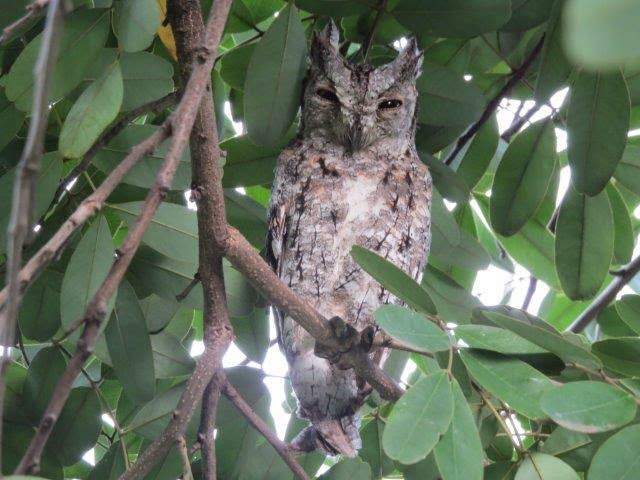 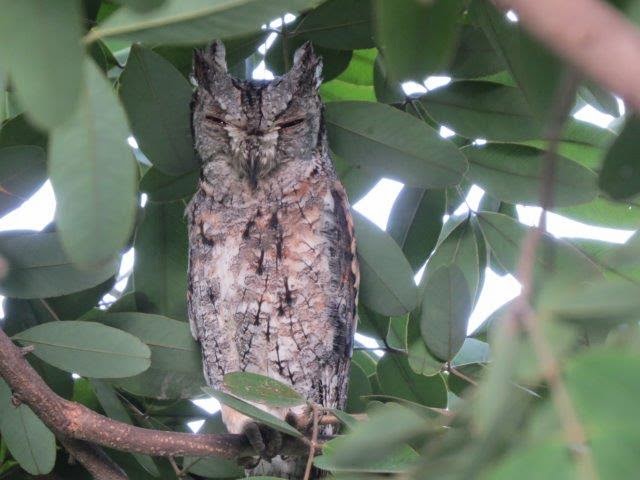 We drove to the student's quarters on the other side of town, and went out into the bush. As we approached the explosives magazine, Kevin called for Grant to stop. In front of us on the road, was a Straw-tailed Whydah. Although it's difficult to get clear photos of birds on the ground, these images came out quite well. 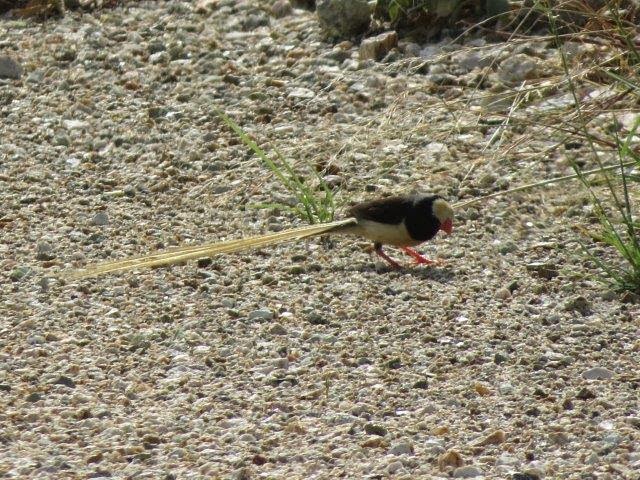 Straw-tailed Whydah with its glorious tail trailing behind it 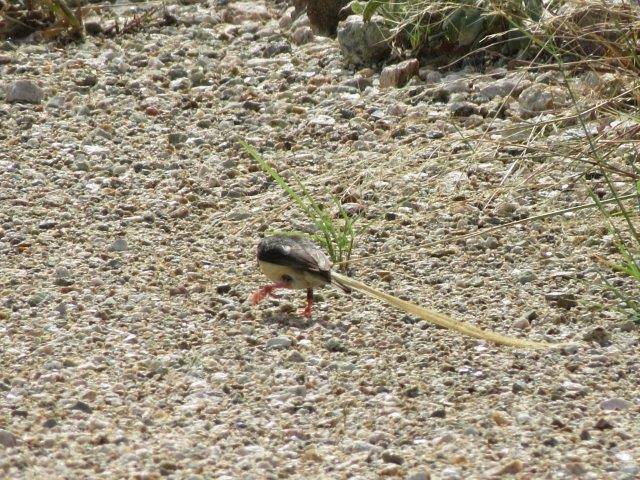 The Straw-tailed Whydah is endemic to NE Africa

Just around the corner, Grant stopped for when Kevin spotted a Silverbird. He zoomed in with his binoculars and told me to take a look. I then zoomed in with my camera, and saw that it was a Juvenile Silverbird! 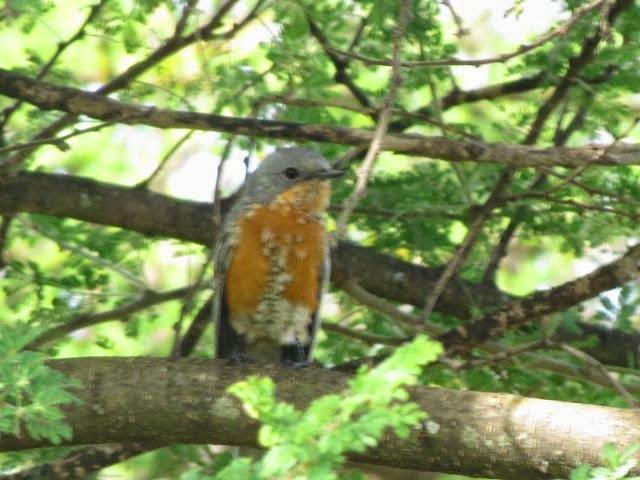 We ultimately spent two hours in the bush and saw many birds (I hope to post the others tomorrow) However, one sighting which was very exciting, was when driving along the bush road near the dam. As we stopped and listened, we heard the bubbling call of a White-browed Coucal.

Grant stopped as we spotted it and a Bishop in a bush nearby. I got out, stood on the running board with my camera on the roof. I took a photo of the coucal in full cry; then I zoomed out and managed to photograph both birds. While I was still focusing on the birds, the bishop dived in and attacked the Coucal which is a quarter of the size of the larger bird!

Later we saw the same thing happening as we drove along the mine road while returning to camp! We've concluded that obviously the Coucal robs the Bishop's nests of eggs and babies hence the aggressive behavior of the Bishop when the coucal is nearby! 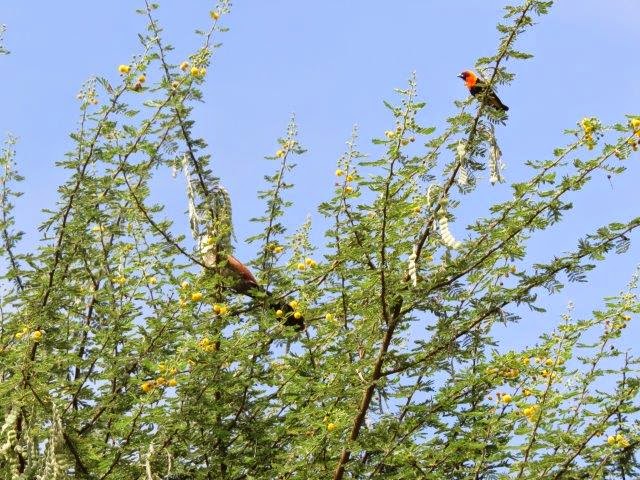 The partly concealed White-browed Coucal on the left with the Bishop higher up on the right! 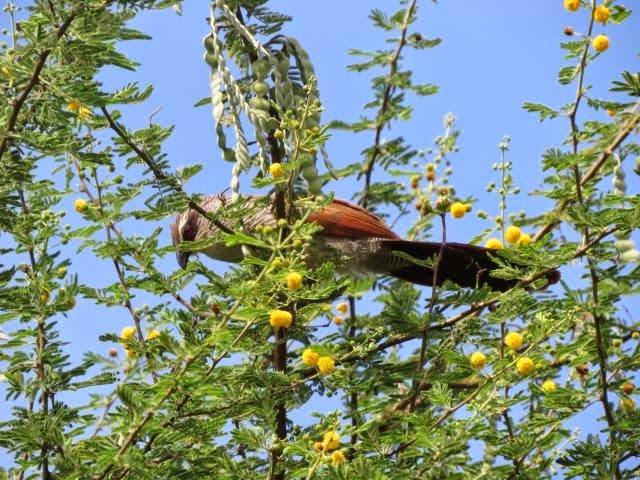 The White-browed Coucal in full cry 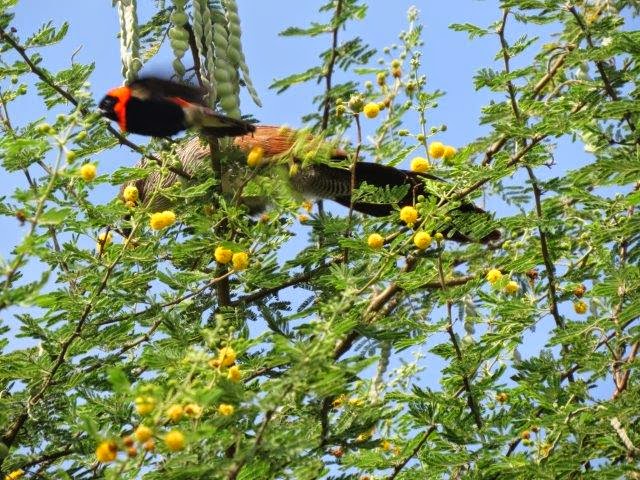 The much, much smaller Bishop attacks and ultimately chases the White-browed Coucal

I hope you're all having a great week. I'm linking my post to Wild Bird Wednesday hosted by Stewart Monckton.