Hi everyone. When I clicked on my dashboard, I realized my last post was ten days ago. And before that, probably four/five days. I've had a mail from dear friend, Penny who was concerned that I'm not active on blogger. She reminded me that even when I had malaria in days gone by, I would post.

My apologies. Life has been rather hectic. Grant was very ill last week and we're still not out of the woods. But being a guy, it's difficult to convince him that he should be taking it easy and rest and really get well again.

In between, my routine has been more or less the same: the dogs and I walk on the golf course every day that I'm home. One of the activities Grant's been recommended on doing to improve his health, is to walk. Well, it's been a week and the dogs and I would still be at the gate from day one, if we had had to wait for him. Perhaps next week; he assures me he'll start walking with us as from Monday.

With spring in the air, although the wind is still pretty chilly, the wildflowers are popping out all over on the golf course. I also managed to get a reasonable photo of a butterfly. 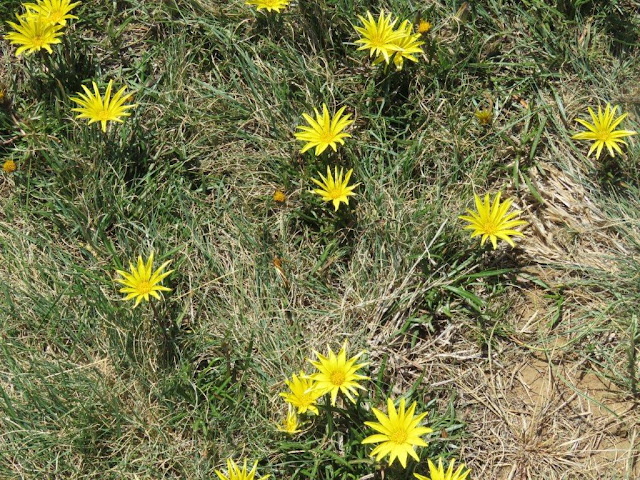 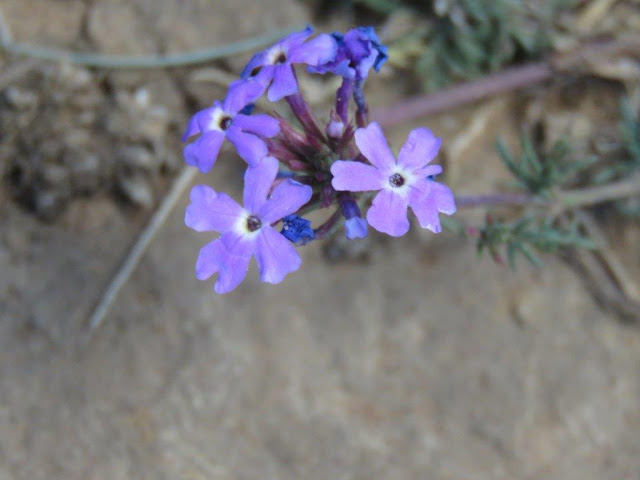 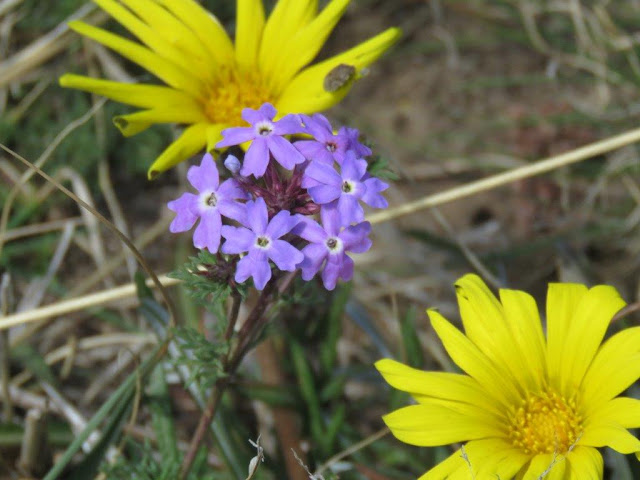 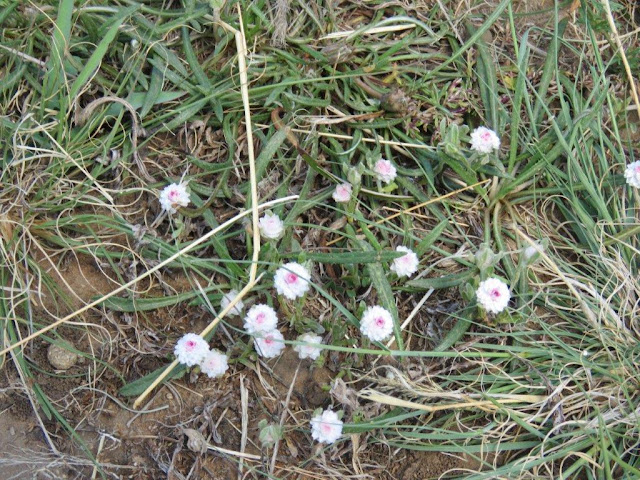 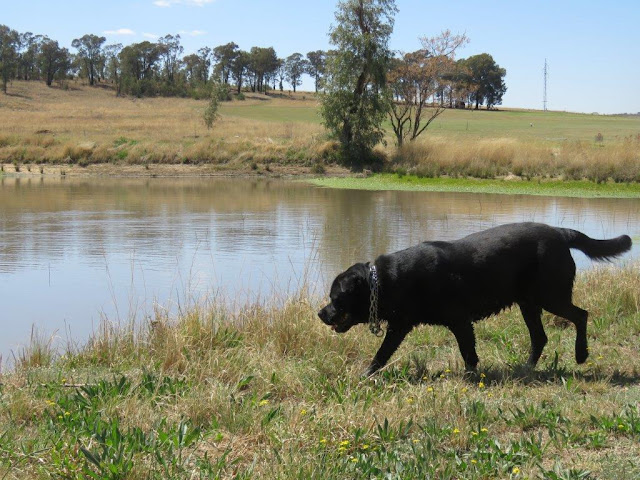 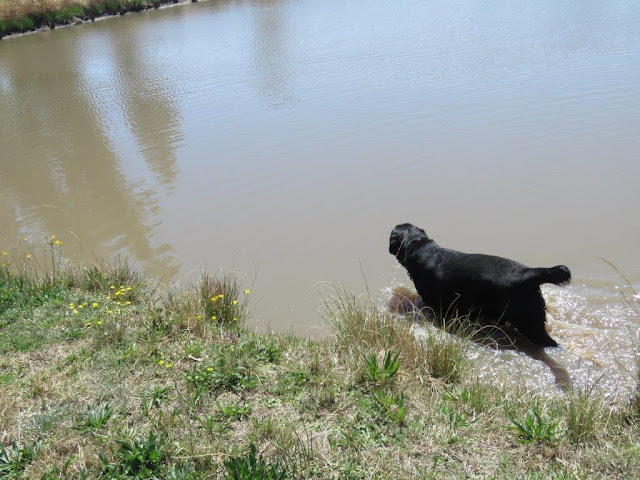 ... and enthusiastic about life! 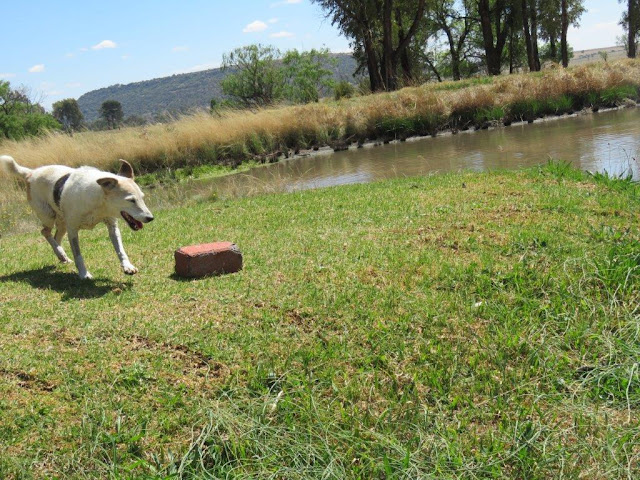 Eddie has recovered well after surgery on her hind leg. Nothing fazes this old lady!

Some of you might remember me periodically posting about friend, Rudi who visited us in April, and who's home we stayed at when we traveled to Cape Town in mid-May.

He visited us again in July (Grant, Rudi and I made another quick trip to Cape Town in mid-July) while Grant was rebuilding a 1988 motorcycle for him. 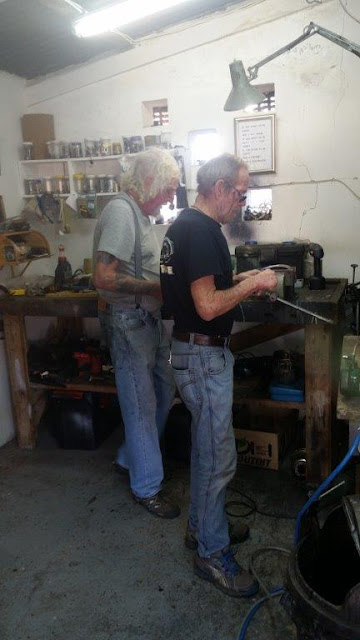 Grant and Rudi working together in the garage 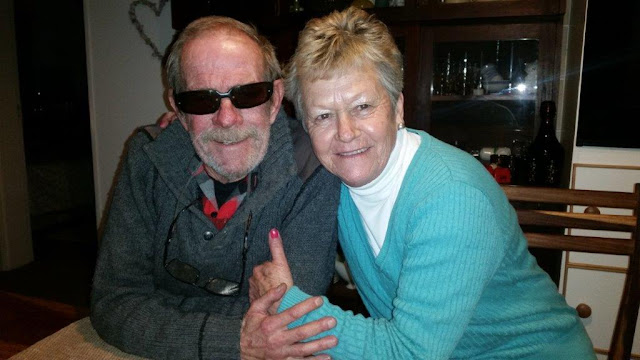 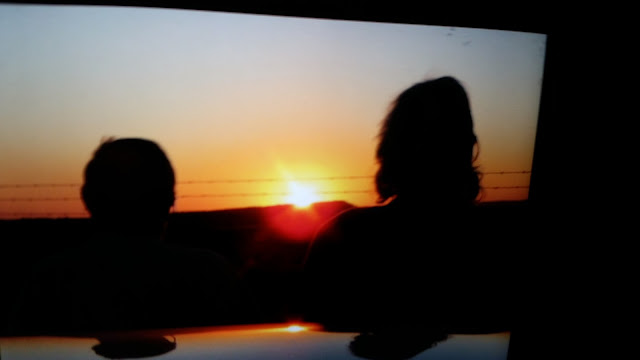 A photo I took of Rudi and Grant watching the sun setting over the Karoo. This was on 12 July on our return trip from Cape Town

Rudi went home to the Wilderness at the end of July. On 12 August a mutual friend phoned us and said he hadn't seen Rudi for several days. He went up to his cottage where he found Rudi asleep in the middle of the day. But when he tried to wake him, Rudi was incoherent. As Rudi didn't drink at all, the friend was most perturbed - he thought Rudi had had a stroke - and phoned us. I managed to contact Rudi's daughter living in Cape Town, via Facebook. She and her brother drove the four hours up to Wilderness and took their father back to Cape Town with them.

From then things got steadily worse. On 9 September, Rudi had a CAT scan which revealed that he had cancer in both his lungs. (Rudi was a chain smoker and already suffered from COPD) and within a short time, Rudi was so weak he became completely bedridden.

Because Rudi was too weak to hold the phone against his ear or even to talk properly anymore, we kept in contact with the son, Byron,  on Rudi's condition.

Last Thursday at 8pm, Rudi passed away. Although he suffered immensely during the past six weeks (the doctor said Rudi was suffocating) and he's at peace now, we - his friends - are devastated at the news. Grant and I have known Rudi since 1991 when he and his wife and three children came to the diamond mines of Oranjemund, Namibia. His wife - from whom he was then divorced - died in a bus accident in December 2008. His younger son, Nathan died in a motorcycle accident, on the way home from work, in February 2010.

Rudi and Grant have worked together in West Africa in 2009 and 2010. In 2011, Rudi was out of work, and I found him a position on a mine in Liberia, West  Africa. When that contract was completed, he secured a position in the Democratic Republic of the Congo. He was a fit and healthy man..until he retired in February this year.
As this post is aired, Grant and I will be on our way to Durban. Rudi's memorial service is being held in Cape Town. But friends and family from Kwa-Zulu Natal, (and us from the FreeState) are meeting up later this afternoon to commemorate Rudi's life. 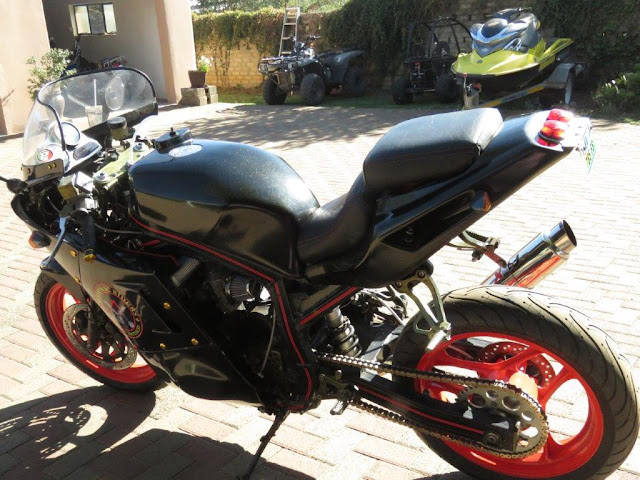 The completed motorbike which Rudi will never ride. I'm busy with paperwork to register it and then we'll sell it for Rudi's children