Critters in my care

Some of you may remember that apart from having two horses on the farm, I also take care of our granddaughter, Eryn's Guinea Pigs.

Every day Namusa cleans the cages, washes off their stone feeding plates, turns their houses and replaces the old bedding with fresh hay.  When it's her day off, yours truly does this job!

Every morning at 5.15 the dogs and I are out on the servitude - nowadays I wear a headlamp. We do our 1.6km return trip and at home I feed Eddie and Skabenga their breakfast. The cats, who have been out and about from 3am (Grant opens the windows for them at that time) are waiting in line near their dishes. I feed them each a taste of "wet" food: chunky beef/chicken/fish in gravy. The sachets are small and should be given to one cat as a portion. However, since returning from Tanzania, I've shared this sachet between the four cats and it's sufficient.

They immediately go off to their day beds (Ambrose posted about this last week) and sleep for the next three hours. The dogs have finished their food by this time and I lock them  in their third section of the rondawel next door.

Then it's time to let the Guinea Pigs out. The girls race out onto the lawn to graze. 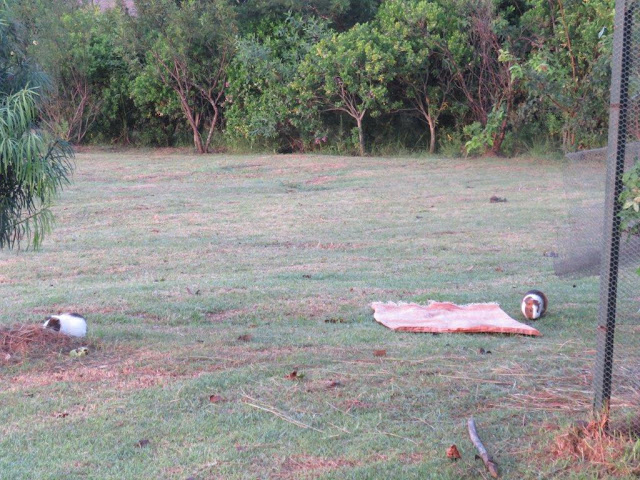 Two of the eight Guinea Pigs on the grass in front of their cage. These are two of the new generation babies born just before and after Christmas 2016 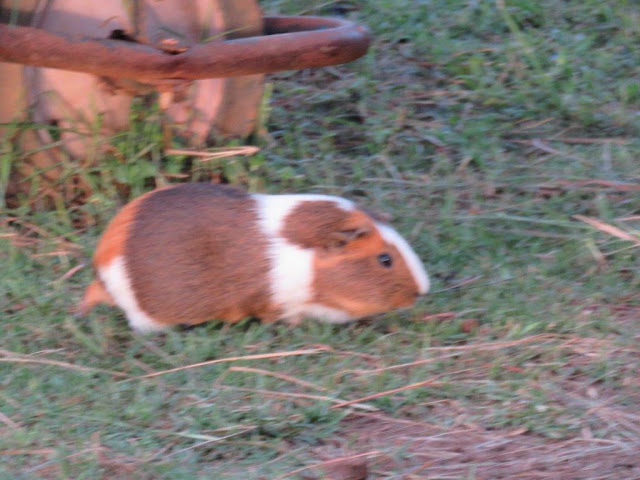 I have to confirm with Eryn, but I think this is Mary Beth. One of the mama's who gave birth in December 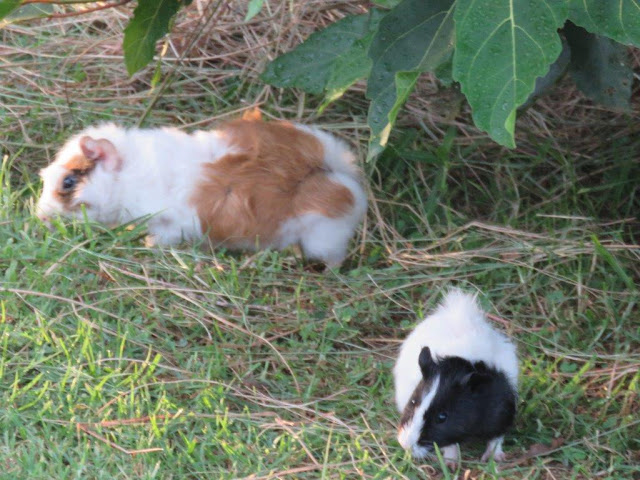 Apple Blossom and one of her three babies 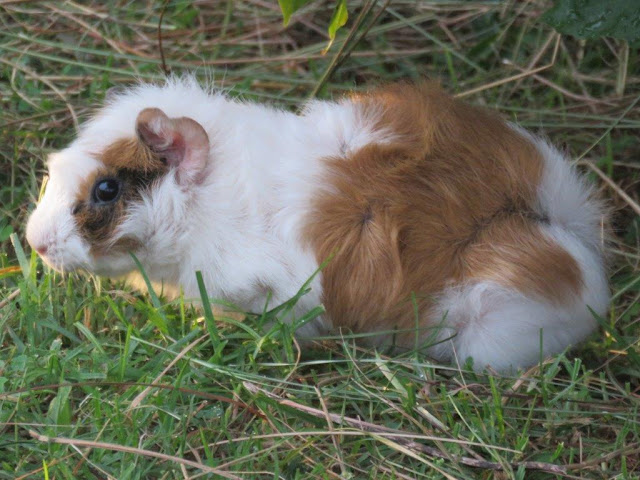 Apple Blossom close up. She is a special type of Guinea Pig whose hair grows backwards (as Grant calls it!)

Apple Blossom had a very bad pregnancy especially in the last week. Her hair began to fall out in clumps and she was so round and huge she could hardly move. She gave birth during the night. When I got there the next morning, I found her suckling three newborn babies. The forth one was almost as long as her and had obviously been stillborn. It was lying dead beside her.

I took Apple Blossom and her babies from the cage she'd been sharing with Hurricane; one of the only two males at the time. In she went with the other females. Misty had already given birth to one baby and Mary Beth was by now very pregnant.

I removed the other male who'd been sharing with the other three females and Misty's baby. In he went with Hurricane. Namusa and I built a small wall to separate him and Hurricane because they were fighting.

Meanwhile Apple Blossom's babies were thriving (Guinea Pigs are born quite big with their eyes open!) but dear little AB was suffering. She'd lost all her fur and was scratching the back of her neck until it bled. I treated her with Tea Tree oil and also tried to "dry" the skin irritation by dabbing her skin with Mercurochrome-soaked cotton wool. All to no avail. She was in such pain and cried piteously every time I administered treatment.

Finally I went to the vet who sold me a shampoo and an ointment to rub on afterwards. Every morning and afternoon, I bring Apple Blossom into the bathroom and bath her in the wash hand basin. Initially she squealed loudly and then she'd relax. It was gratifying to see that the shampooing treatment was helping this poor little girl. Afterwards I generously smear the ointment onto her skin and take her back to her cage.

As you can see from the photos, from a bald Guinea Pig to the thick pelt she's displaying now, Apple Blossom is one of my successful projects here on the farm!

At 8am Namusa arrives and immediately cleans the girls cages. I bring in their food (a veritable smorgasbord!) and they come running into the cage on their own - all eight female Guinea Pigs. They've had three hours out on the lawn.

I shut the females in their cage and open the males. They have their grazing time on the lawn. When I go inside their cage and tap on the tin plate carrying their food, they come running. I arrange this beautifully on their stone feeding plate and shut them in.

The dogs and cats are let out.

The Guinea Pigs have another two hours grazing on the lawn.

It took a little planning and keeping to the arrangement but I proved you can have cats, dogs and Guinea Pigs (who are actually rodents) all on the same yard!

HAPPY SATURDAY TO YOU ALL
Posted by Jo at 4:30 AM