When I drove UP the valley at about 4.30pm,  to my birthday dinner with friends, I crossed this dip. It wasn't even wet. An hour later Caroline arrived and said it was flooding. Caroline emerges from the Bergview turnoff - the red direction signs  which you can see behind the white car. She turned right to drive to the restaurant where were waiting for her. +Aroudn this time someone photographed this car which only just managed to ford the stream and get to "this" side of the road. The photo appeared on a local Berg CHAT group which I belong to. When I'm out in public, I never check my phone so of course, I didn't see this! 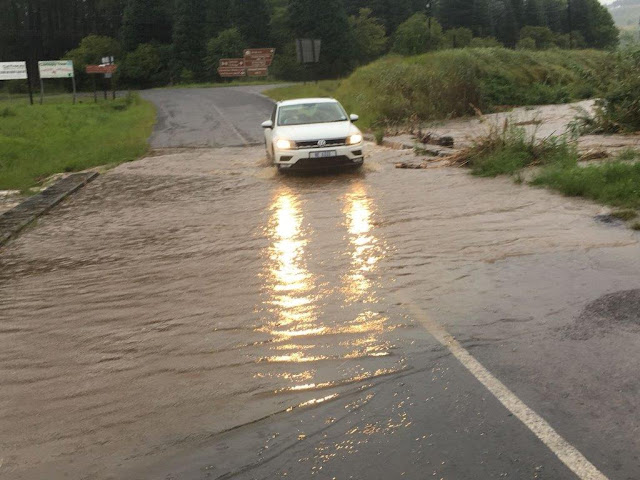 Above: the low drift which was being flooded as we sat at ate dinner five kilometers up this road 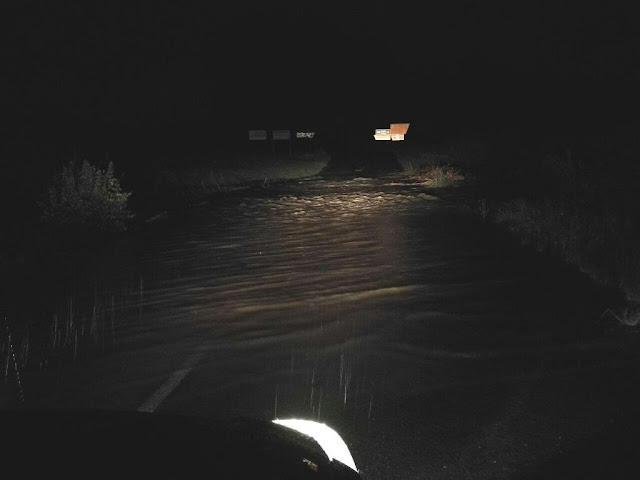 The photo above was taken at 7.20 a few minutes before I approached from the opposite side. the photographer, a friend of mine, was sitting in high-clearance pick-up truck which easily crossed the now raging and swirling waters
As I stopped behind another small car that night, I could see the waters rushing across the road. I thought: here's another first without Grant who had owned a large, high-clearance diesel powered Isuzu and which would've cruised through the submerged dip without a splutter.

Not my little petrol Ford which, if it could hold while riding through the two-foot deep swirling water, could have water splashed up onto the plugs, splutter and stall in the middle of it all. 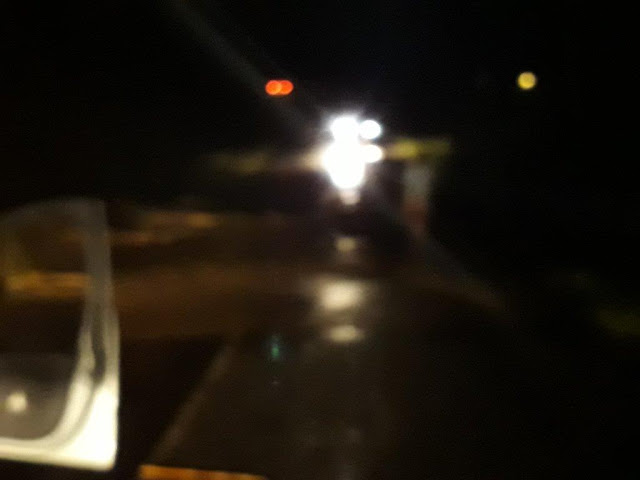 The driver of the car parked in front of me got out, walked to the water's edge and then gingerly waded into the water. I got out of my car, kicked off my sandals and followed him. Together we got to the middle and the part where the water was really cascading strongly across the road.  The man, who spoke with a German accent and I became firm friends, discussing the perils of venturing into the - now-swirling-around-our knees-waves with our small cars.

I got back into my car, turned around and drove up the road to Highlands. I have a remote to the estate's gate, let myself in and drove to Estelle and Steve's house, which was in darkness when I pulled up on the gravel! I phoned Estelle, and when she answered, I said: Guess where I am? and when she said, she couldn't begin to guess, I said: I'm at your front door and need a bed to sleep!

She duly opened up and showed me to "the blue room" which I occupied for several weeks after Grant's death. She found a new toothbrush; I'd had my laundry done here in the center that day so had my PJ's and a clean towel with me!  I also phoned Ronnie, my neighbor and landlady to say what had happened. Being cut off because of low-level bridges flooding the roads, is a regular occurance in the summer time here, so all she asked were my pets OK? Could she help in any way? I said no, the cats are safe and sound inside my cottage and Skabenga is fine sleeping on the veranda.

Early next morning  while having a cup of tea with Estelle, I checked the local CHAT group where I learned that the bridge was now open. 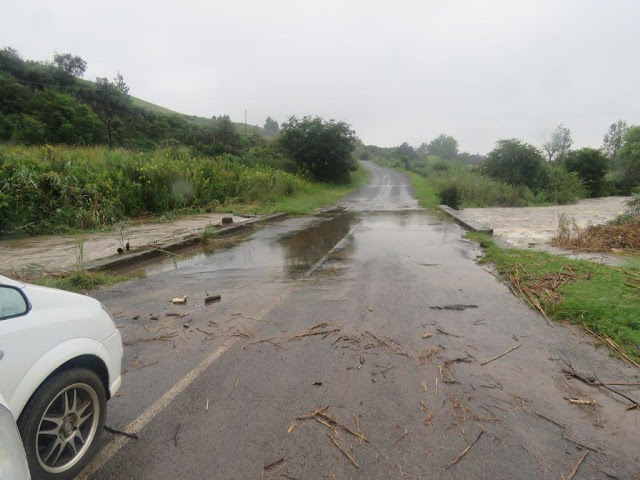 The same spot I was parked at the night before. This time the water had subsided and I could cross the drift quite easily. (note the river still raging on each side of the bridge


When I got home, I thought Skabenga was going to hug me. You'd think he was this fragile little dog who cannot spend a night without Mum.  The cats came to to door, stretching and yawning and looking completely bored with life.

Until I opened the fridge and brought out their meaty chunks in gravy. THEN they remembered why they needed a yoomen around.

I dressed for work, got into my car and was at work about 45 minutes later than normal. Ronnie phoned to ask if I'd found the farm road passable (which I had) and reminded me that they'd pick me up for the Valentine's dinner at The Nest Hotel that evening.

On Wednesday afternoon, I made use of my complimentary voucher and had my nails done at the beauty salon along the veranda. 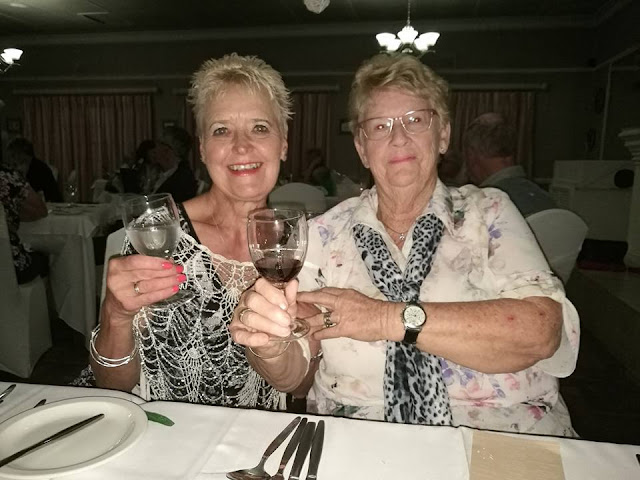 Me and Ronnie at the Valentine's dinner toasting with our soft drinks in wine glasses! 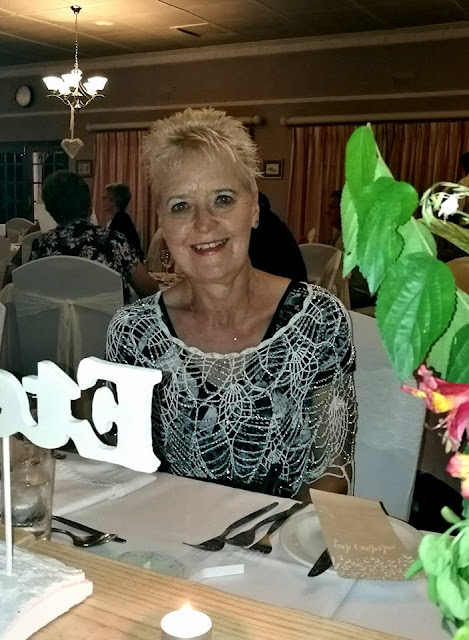 Shelley and Stuart, who own The Nest, had beautifully decorated tables for Valentine's dinner 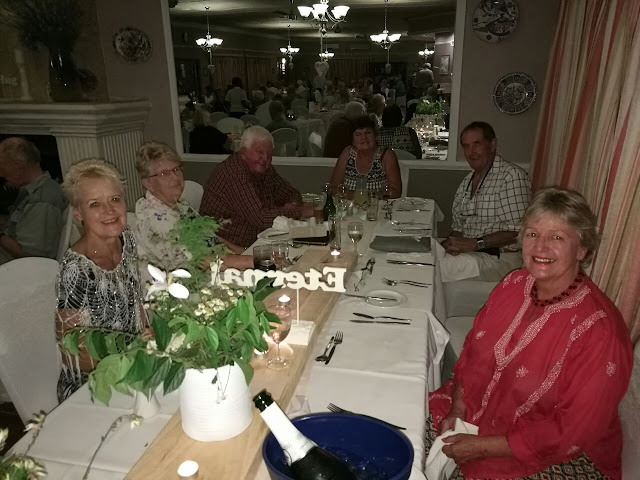 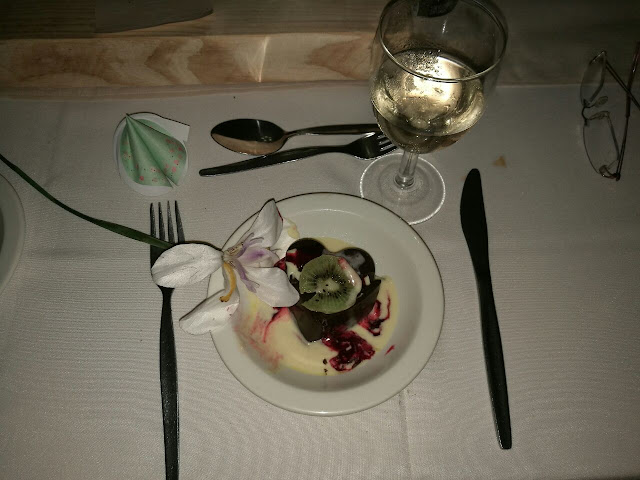 The dessert, called a Chocolate Bomb was a creation in ingenuity and decadence. A 3-D heart shaped chocolate filled with fresh fruits like cranberries, gooseberries and grapes 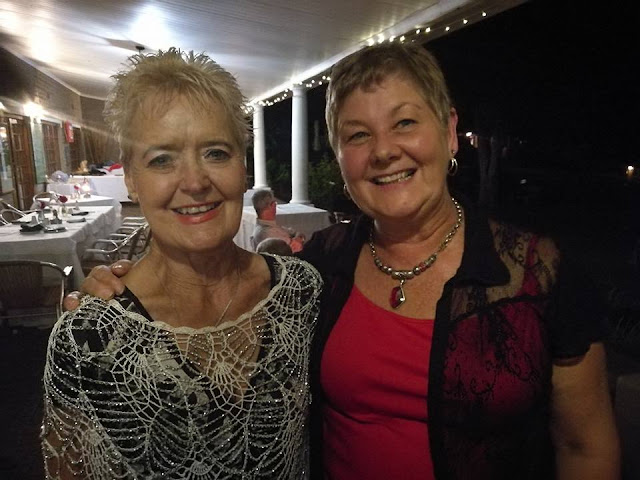 I hope you're all having a wonderful Thursday!