Yesterday Steve and Estelle had to go to the city to have Estelle's car serviced. I asked Estelle if I could catch a ride with them and they drop me off at Grant's 82 year-old aunt, Gill.  Her husband, Neville, 84, hasn't been well since June. Now he had contracted pneumonia and now was fading fast.

Last year Gill and Neville visited us (twice) on the farm. (here) 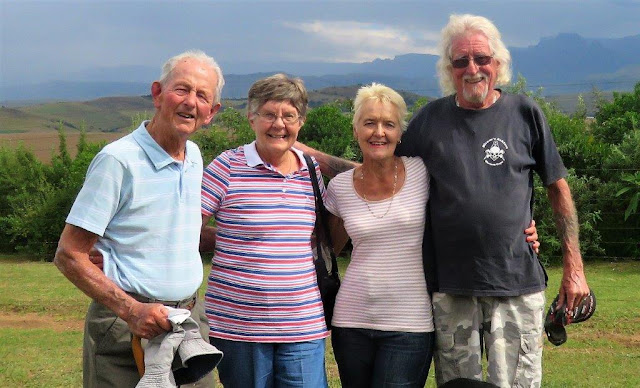 I arrived and Gill and Neville's home in the large retirement center, Amber Valley, just after 7am. Grant's other maternal aunt, Carole, had been helping Gill to care for Neville for the past ten days. Both these sisters are professional nursing sisters, and I thought it very special  that Neville was being tended by his wife and sister-in-law this way. They hired a carer for night nursing.

I'd seen Gill and Neville at the beginning of August when Angus, Amanda and I popped in on the way back from visiting John in hospital. Gill had told me that he had deteriorated rapidly since then but I wasn't prepared for this dear man lying there gasping for breath; not an ounce of flesh on him and his wispy hair snow white. Carole and Gill said he is still aware of people around him and told him "Jo is here". Whether he knew or not, while Carole stroked his hand, I stood on the opposite side of the bed holding his other hand and spoke softly to him. I told him how much Grant and I had loved having him in our family for the past 22 years and thanked him for being so good to Gill.  Carole and I spent a long while with him (which gave Gill a chance to get dressed and see callers, of whom there were many); I, one side,  while Carole told him to rest easy now as everything has been taken care of. Apparently, before he weakened, he was very agitated and it seemed as if he was worried about Gill.

When I returned to the lounge, Neville's son, Craig - who'd flown in from Australia - had arrived with a bag of groceries. He and Neville's daughter who lives around the corner from Gill, have taken such good care of the two sisters and their visitors, fielding calls when both were busy with the patient and offering vital support in this trying time for Gill.

The whole morning people called; even passersby from the village just stopping in at the door to inquire about Neville. Gill was surrounded by such love and care from the community, their pastor, their friends and family.

All the while, we continued doing normal things.  Craig popped into town for Gill. When he returned, he attached Mia, Gill's little dog's harness so I could take her for a walk. Gillian prepared a salad lunch for us to enjoy later. Carole fielded calls  on the landline for Gill. 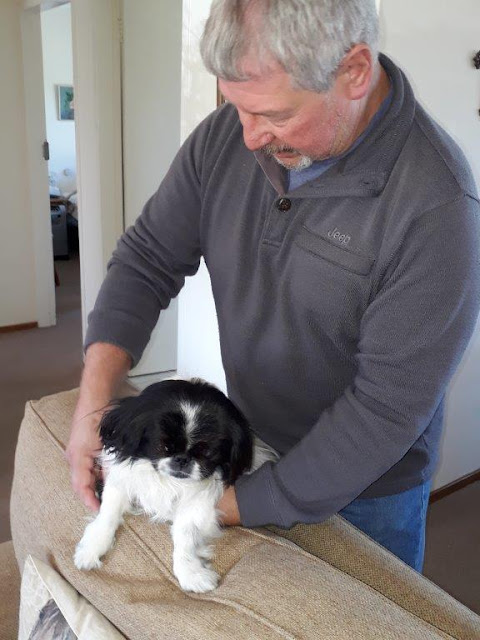 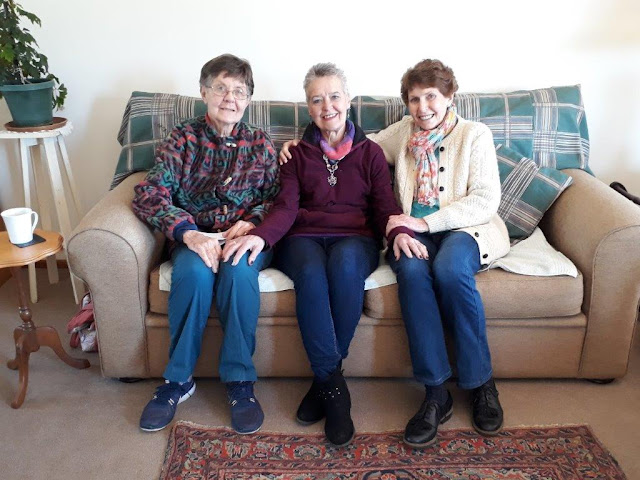 Me with Gill on my right and Carole to my left

At 1pm, Grant's uncle, Dave and his wife, Wendy arrived to say hello to me. Dave was only five years Grant' senior so it felt strange that he was an uncle! Then it was time for Steve to collect me. I said goodbye to everyone and went in to bid farewell to Neville.

On the way home, Steve and I spoke about the fact that I'd felt I wanted to spend the day with Gill and how special it had all been.

This morning at 9.10, Neville passed away peacefully.