Hello dear Blogger friends; it's been two weeks since I posted about Skabby being sick - as a dog! My canine baby of 60kg is better and more boisterous and loving than ever.

Last week, Friday, I became sick. So it was my turn. And no, not with Corona Virus although it has arrived in South Africa. I had a very bad dose of flu- for me - for the first time in 30 years . And I stayed in bed to heal myself.

My neighbor, Ron kept a vigilant eye on me and brought me effervescent meds to boost the vitamins and clear my head. 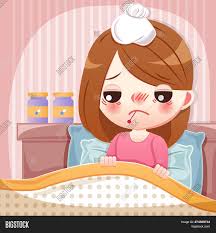 I've been out today volunteering at Parkrun. On the way there this morning, I was stopped by early morning traffic. 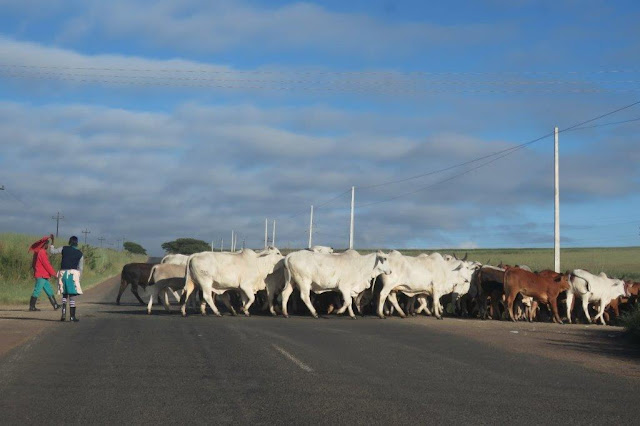 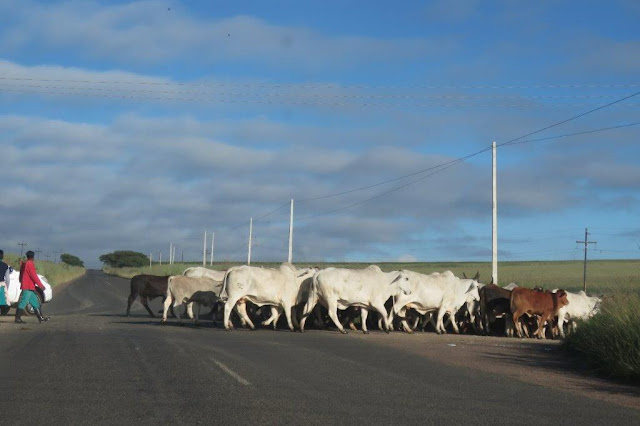 On the way home along the farm road, I stopped to capture this lovely scene ... 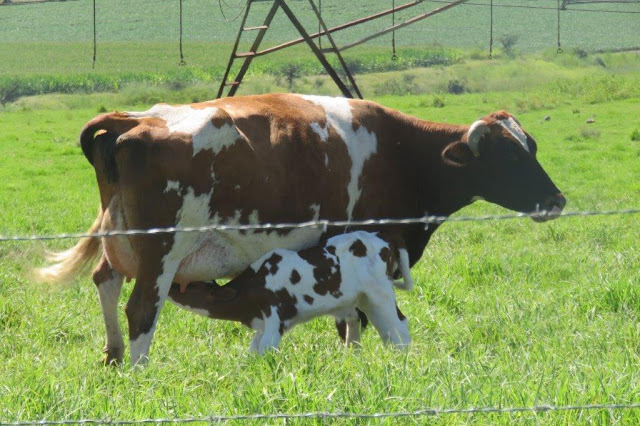 A new born calf with its mama

And now for some real critters. Last week I heard the Double-Collared Sunbird making alarm calls in the garden. I went out and sure enough, there it was warning all and sundry that there was a cat in the vicinity. 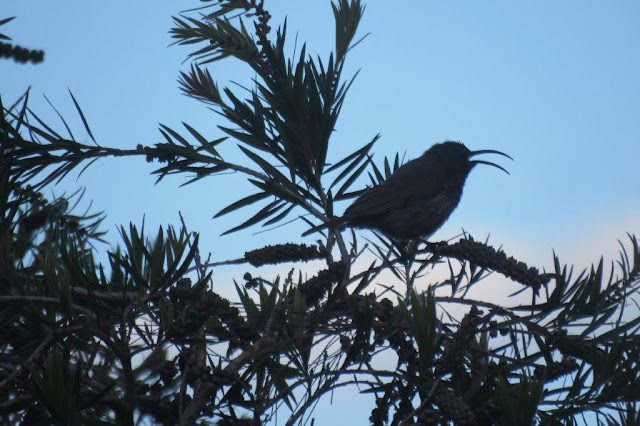 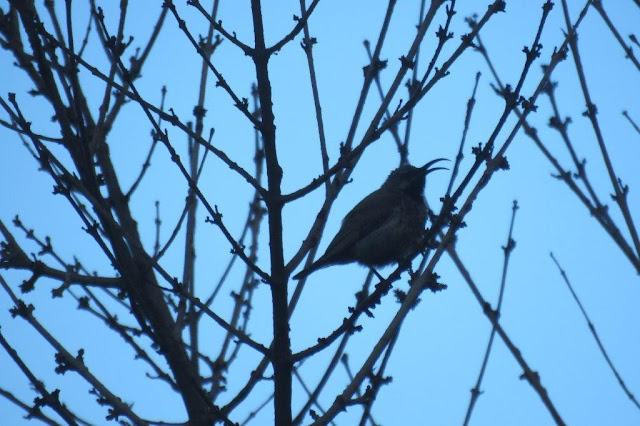 (Note: this is a silhouette of the brightly-colored Southern Double-Collared Sunbird due to photographing it in bright sunlight) 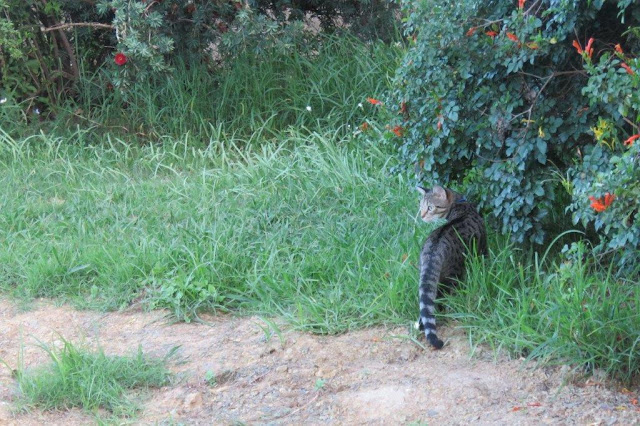 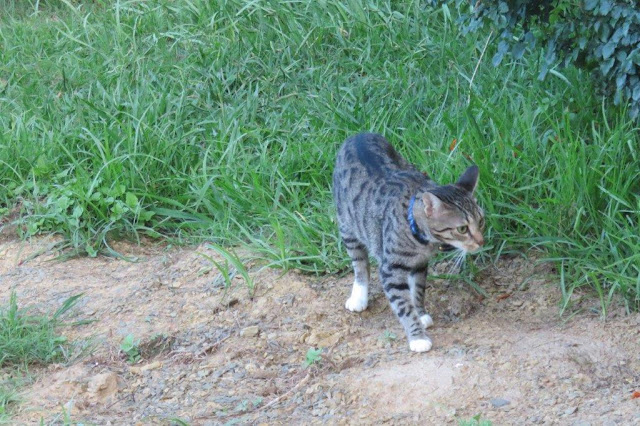 While writing this post, I heard a sunbird calling again. Missy was sitting quietly on the veranda next to me, so I couldn't blame her. I picked up my camera and snapped at the female Southern Double-Collared Sunbird, seconds before it flew off into the higher trees beyond my garden. 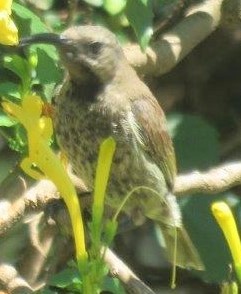 Earlier today,  I walked inside and saw Miss Missy gazing at something on the wall... 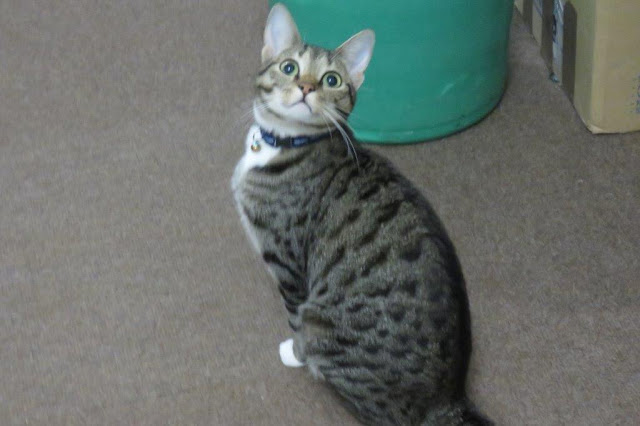 ...a rain spider up near the ceiling in the kitchen. 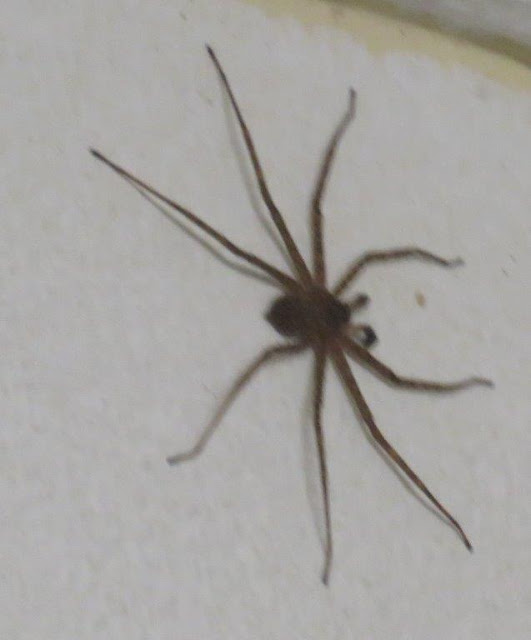 Recently I walked from my friend's house to the gate. She accompanied me. As we reached my car parked in the shade outside her garden, she screamed: LOOK AT THAT SPIDER! She had bent down to remove her shoe and was about to make short work of the poor critter. I put my hand out to stop her and had a closer look: there it was,  a beautiful garden orb-web spider basking on the warmth of my car's mudguard.

I reached for my Smartphone and zooming in (while she squealed, be careful, it will BITE you!) I took two photos. Using an invoice which I had in my bag, I managed to coax the spider onto this and quickly put it on a bush.

I told my friend, I never kill spiders to which she replied, I kill ALL spiders !

Back home I checked in my Field Guide for Spiders and Scorpions in South Africa and confirmed that it was a garden spider. I sent photos of the spider and that in my field guide to my friend. I told her it was harmless to man. I also told her that there are very few spiders in South Africa which are harmful to us humans. She replied that when we next meet, I must show her the dangerous ones. She said she would like to stop killing these creatures indiscriminately!  (the photo below is a bit noisy because of my car's shiny surface, but shows the beautiful harmless garden spider) 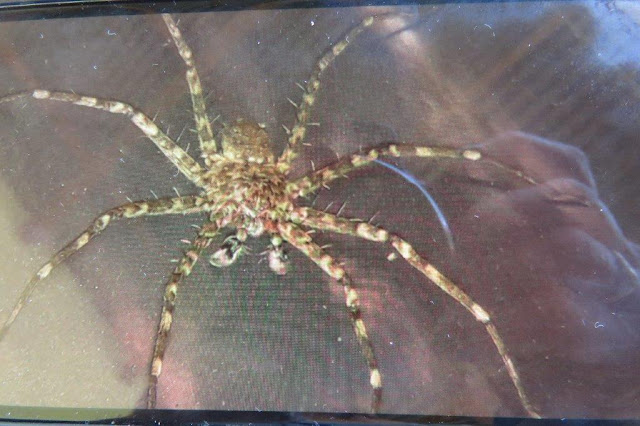 I felt as if   hoped by this little lesson imparted,  I'd saved a few future spiders in South Africa!

HAPPY SATURDAY TO YOU ALL!
Posted by Jo at 1:21 PM