Just when I thought...

Seriously, dear Blogger friends. Just when I am catching up on my blogging, life threw me a curved ball which sent my timetable flying into the blue again!

Last week we had strong winds which is normal for August. But these seemed extra violent whipping around my little cottage on the farm. On Friday morning I noticed the ceiling board above my kitchen area was slightly split open. Now -  on a farm, you don't bother the farmers with trivial household issues.

However,  on Saturday night I was woken by a loud rending sound. The four cats on my bed,  hopped as high as I did but Skabby continued to snore on his mini donut. This made me realise that it was not an intruder.

I gingerly stepped into the office area which is open plan to the kitchen. And there above the sink, the ceiling board had sagged alarmingly.  I removed my kettle and covered my laptop on my desk and returned to bed. I must admit, I had a terrible night. I kept waking thinking of the mess and damage if the whole ceiling collapsed.

The next morning, it was still in place,  albeit only just.

Being Sunday,  I collected Thandi, her daughter Tombi and Thandi's sister, Mavis from the township. I always drop Tombi and Mavis off at their place of work at the Thokosiza Lifestyle Centre and then Thandi and I continue to The Bunker. We cleaned after the guests who had stayed the weekend and prepared for the one guest staying from Sunday until Wednesday.

All the while I worried about what was happening at home.

After dropping Thandi back home in the township at midday on Sunday, and returning home, I walked over to Ron and John's house. They were watching tennis. I told Ronnie that my ceiling was sagging and she was horrified that I hadn't called them the night before. I said I didn't see the necessity of bothering them at night.

John walked back home with me; on  the way we called Nurse (who gardens for Janine next door) to come along in case we needed help.  When he saw the sagging board, he said "that is not good but we will make a plan to fix it". This is always a farmer's stock answer.  I told him that a friend, Brian,  does maintenance and I'd ask him to come through on Monday and check it out. I'd already messaged Barbs to see if Brian would be able to come and help. At this, John  demurred, saying the battens had become dislodged and he was sure he and Gavin could fix it in the morning.

Being a tall man, John gripped the edge of the ceiling board and jiggled it saying, yes, this will be easy to fix. I was standing under the board and Nurse was behind John. Just then the whole caboodle wrenched free of the last batten and came swinging down. I squealed and all three of us grabbed at the board. It was hanging by a mere thread, the light fitting! We were showered with rubble and bits of concrete.  I quickly turned off the lights at the mains and at that moment Barbs phoned me. Before she could speak, I said (quite loudly, I might add) "the ceiling has collapsed on us!"  She said she and Brian were on their way.

That's friends for you, hey? 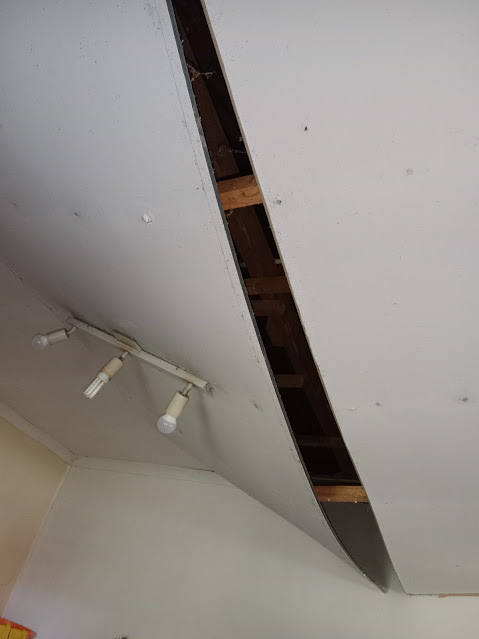 This happened when John jiggled the edge 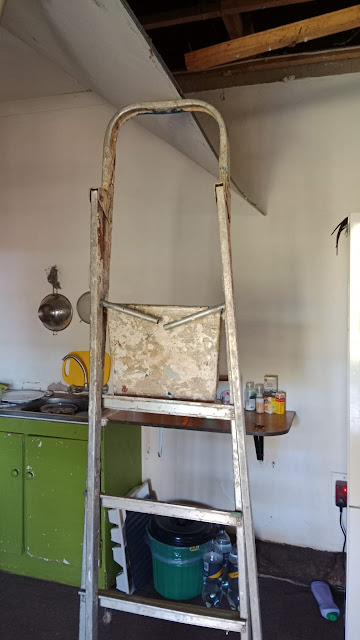 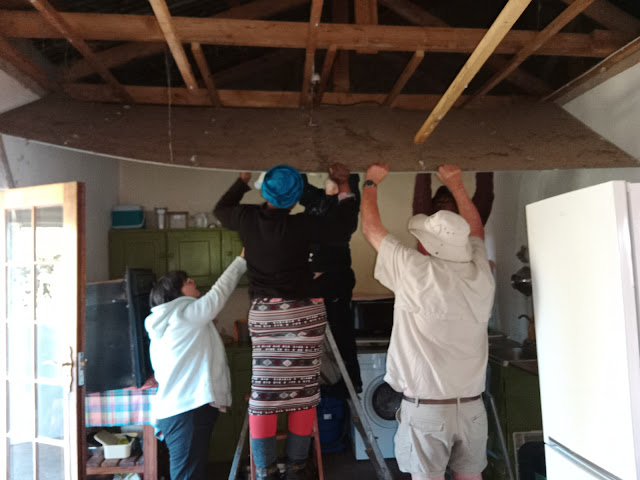 Barbs, Nurse on the wooden stepladder, Farmer John, Smagela (from the dairy) and Brian on the steel ladder, carefully dislodged the ceiling board and took it outside
No sooner had they removed that ceiling when the one next to it (above where I was standing taking the photo), creaked and groaned;  with many hands catching it, it just missed crashing onto my desk and the floor. This sheet too, was taken out onto the veranda.
John was most impressed with Brian's work thus far and thanked him for coming to help and for agreeing to replace the new boards. John went to the hardware store today and bought three new ceiling lengths and several meters of cornices.
I vacuumed the floor three times yesterday. This morning when Thandi walked in, she looked up (I'd told her about the disaster yesterday) and she has an expression of annoyance. It sounds something like HAH!
That dear lady spent the whole morning sweeping up and vacuuming the house again. She also took the long feather duster and removed all the cobwebs hanging off the exposed battens. Then I saw her clean the carpet again.
This morning I experienced the coldest weather indoors ever.  It was coming from the kitchen/office. Which is ceiling-less.  Ceilings provide insulation - and how.
Because I didn't get to any of my own work yesterday, I asked Ronnie if I could stay home from the farm office today to catch up. Of course she said of course! They are so unbelievably good to me. And at least John agreed to have the job done much more professionally than by a farmer's "make a plan"
HAPPY MONDAY TO YOU ALL