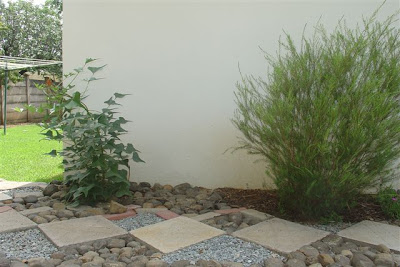 My dwarf coral tree (Erythrina humeana) and confetti bush (Coleonema pulchrum) stand side-by-side on the path leading to the wash line and small vegetable garden behind the garages
According to my book, A South African Garden for all Seasons, (Reader’s Digest) the shrub on the right in the photo above, when in full flower, looks like it’s been sprinkled with pink confetti. It is called a confetti bush – what else! (Coleonema pulchrum.) It is flanking my pride-and-joy of the moment: a dwarf coral tree (Erythrina humeana)

I should actually wait until they both are in FULL flower before posting about them; but I’m far too excited about the results I’ve achieved so far to wait! (I will post later again, when they are in full flower) You see, I’ve proved that if you plant in the correct location, (yes, even indigenous plants are sensitive, vulnerable to sun/wind and susceptible to frost) you reap the best results. 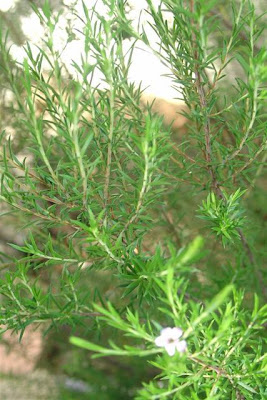 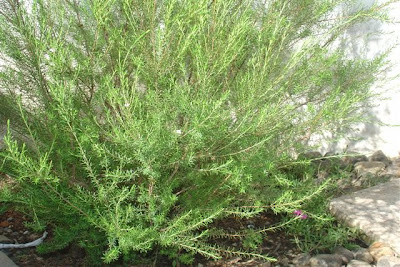 In November 2006 while browsing through the fascinating nursery and gardens at the Free State Botanical Gardens, I spotted a beautiful potted shrub with coral coloured flowers. When I asked the very knowledgeable salesman what it was called he said it was a dwarf coral tree (Erythrina humeana). My next question to these salespeople is always, “Does it grow easily/do well in the Eastern Free State?” To which they ALWAYS reply, “Yes,”. I bought it. I subsequently read that it was endemic to the South-Western Cape but thought I’d give it a chance in my area. I planted it in the middle of my garden alongside the aloes (Aloe spp) and Barberton daisies (Gerbera jamesonii) which were doing well in this exposed bed.
It grew marginally but by the next winter it died down completely. In fact I thought I’d lost it to the frost, but my older daughter-in-law, who had a beautiful specimen of the shrub in her garden just down the road from me, assured me it would return again in the warmer months. Sure enough, it appeared in October and while it seemed to struggle to grow, it survived until the next winter when it died down completely again. 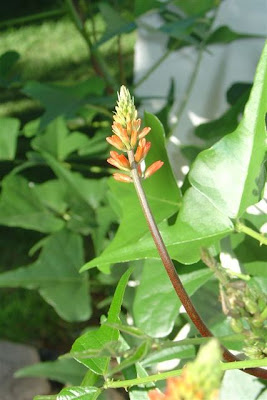 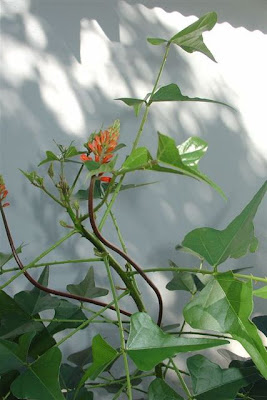 In the photo above, the newer buds of flowers are already visible
By now I realised that something was not right. While visiting my d.i.l. and walking through her beautiful garden, I noticed that her dwarf coral tree had grown into a lovely strong shrub and was flowering profusely! I dashed home, called John the gardener, and told him we need to find a suitable new home for my plant. I showed him a photo of a flowering Dwarf Coral Tree in my Creative Gardening with Indigenous Plants – (Pitta Joffe), and told him that Debbie had planted hers against the wall surrounding the swimming pool.
Together we went in search of the perfect spot.
When we got to the cathouse wall which faces west, alongside a path leading to my small vegetable garden and the windy drier/wash line, we both said “Mona!” (South Sotho for "Here") John dug a hole, a spade deep and a spade wide, added a few small stones, some compost and fertiliser. He topped it with a bucket of fresh cold water. Then we went to the waning dwarf coral tree, lifted it gently, carried it to its new planting hole and replanted it.
From the first day it THRIVED. Because of this sheltered spot, it survived the winter. When spring arrived it shot out new leaves and spiny branches. Last week I noticed the first flowers and yesterday they had opened enough for me to photograph. The leaves are made up of three leaflets and hook thorns are found on the main veins and stalk. It is (as my book says,) an attention-grabbing shrub/small tree, 3m x 2.5m with long-lasting nectar-rich flowers throughout the summer, which attract both birds and insects.