The aliens have landed!

Imagine forty years ago if you woke up and saw this in your front garden... 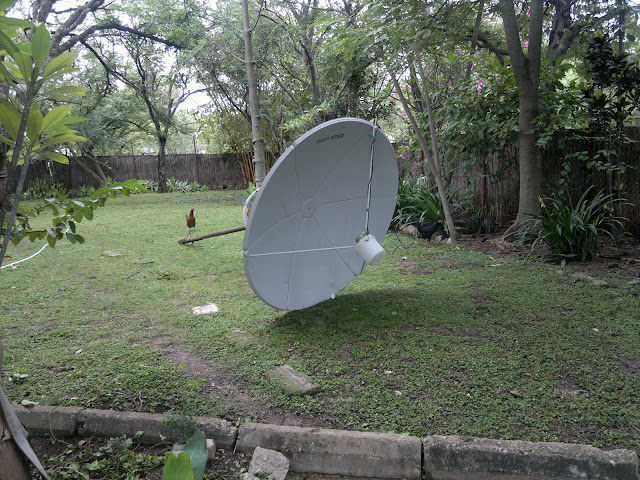 When I asked askari Edward about the sattelite dish, he said it belongs to Donatus who lives two doors down from us. Donatus, a supervisor in Grant's workforce, is on leave and last night the wabeshi / illegal diamond miners, who swarm through town at night,  tried to carry his sattelite dish away. As we and the Guest House opposite have askaris/gate guards, the two men on night shift, Mayunga and Zechariah carried the dish into the safety of our garden!

To explain about the wabeshi, I need to go back a week. There are always illegal diamond miners all over the mine. They are the bain of the security team's life! They have always been around and the security have always chased them. However, a few days before Christmas I was sitting at my desk when I heard an explosion. (This is nothing new as we always hear when there is blasting on the mine which is only two streets away to the west.)

A minute later I heard another explosion, except these were not like anything I'd ever heard before and I know that there is always only one blast on a given day. These sounded more like gun shots emitting from - in my imagination -  a HUGE gun, something the size of cannon. Each shot, coming frequently now, was also  accompanied by what sounded like a collective wailing from many voices.

I  dashed out into the street and saw Edward and gardener Mataluma  standing on an informal compost mound in the empty plot next door looking down the street. By screwing up my eyes, I managed to see people running out of town. All the while, booming shots rang out from as near as the memorial park beside the Guest House! Edward called to me to join them on the top of the heap where he told me that the security forces were chasing wabeshi from the pits. The shots fired were not real but some sort of pepper gas.

Since then it's been quite normal to awake suddenly in the middle of the night and then realize that what woke you was a shot which sounded as if it went off just outside the window! And as you turn over in bed, hoping to fall asleep again, you jerk involuntarily at another couple of bursts of "cannon-fire" and the accompanying wailing of voices.

As you can see, even though we live in a remote diamond mining town in northern Tanzania, there is never a dull moment!