At last I'm able to sit down and write a post about our Christmas here in Mwadui, Tanzania. Along with Tilla,  Amanda and Nsia, we'd decided that we ladies would do the meats: I the turkey and glazed ham; between them they'd roast another chicken, a d-boned leg of lamb and a beef roll.

Fortunately I managed to secure a 6.5kg turkey and a 2kg smoked ham from the supermarket in Mwanza where I stock up on the monthly groceries for the Guest House.

I began defrosting the turkey on Sunday and by Monday morning I was able to stuff the big bird with 1kg of pork sausages and other ingredients which make a delicious Christmas forcemeat. Storing it in the fridge, all  I could do that day was to pray that the power would not go off on Christmas day when I wanted to do the cooking.

I set the alarm for 3.15am on Christmas day (so much for lying in on the only day off in the year, LOL!) and having arranged with the askari's to let me into the Guest House property, where I removed the turkey and placed it into the large oven. At one hour per kilo, I calculated that the turkey should be ready by 9.30am. I also took the ham from the fridge, brought it over home and placed it into my smaller oven. This only needed under two hours to bake.

Meanwhile Grant had also arisen and started on cutting the onions and green (sweet) peppers for the three bean salad . Then we started on making a traditional English trifle.

All the while we ran between our home and the Guest House across the road to check on the turkey. The men sleeping in the guest bedrooms told me later that they were pleasantly woken by the delicious aroma of roasting meat emitting from the kitchen!

By 9am when we'd opened and basted the turkey for the nth time, Grant gave the verdict that it was perfect. It didn't even need an open roasting to brown it, so we brought it across to our house. I put the finishing touches to the ham (cherries and pineapple rings with a apricot jam glaze) and we were ready to take all to the club at 11am.

Meanwhile we each had a bite to eat (Grant made himself a slice of toast and Bovril, and I cooked myself a bowl of oats) and afterwards I clicked on a whole hour of Christmas carols by the boys' choir,  Kings College. Too beautiful for words!

At 10h45, we'd showered and dressed and we loaded the food into the landcruiser. There was also an arrangement that each man had to buy a gift for a man and we four ladies had bought gifts for each other. 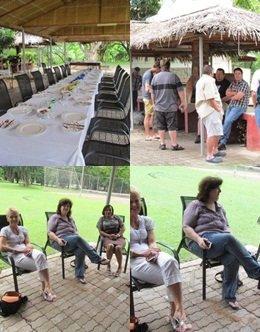 Amanda had set the tables beautifully and with the young men helping Grant to carry the food from our car, I was able to rest my weary legs and back! 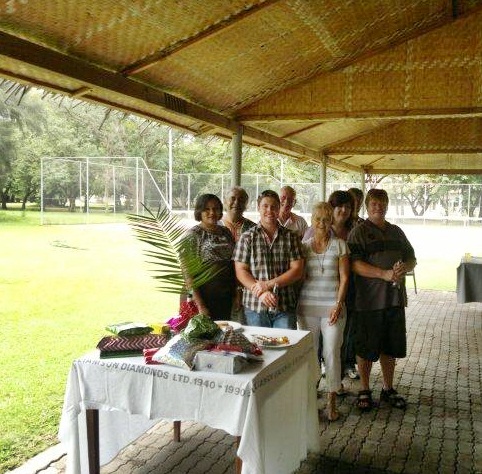 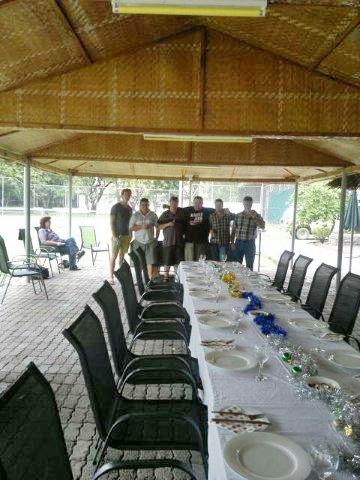 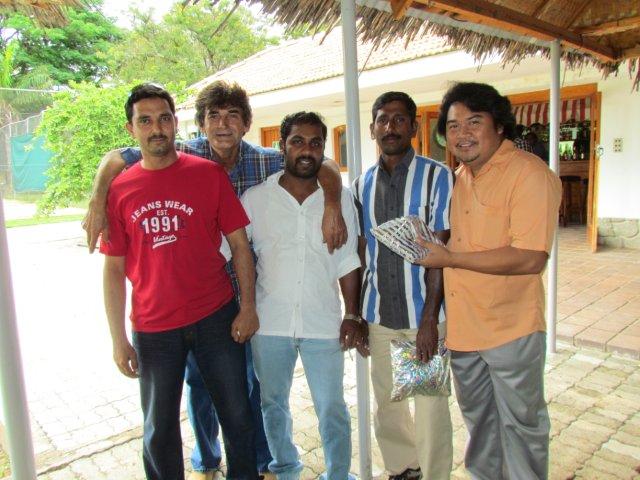 The three men in front row from left are all from different parts of India; Jung in orange shirt, is from the Phillipines and Juba, arms draped across their shoulders is from Yugoslavia 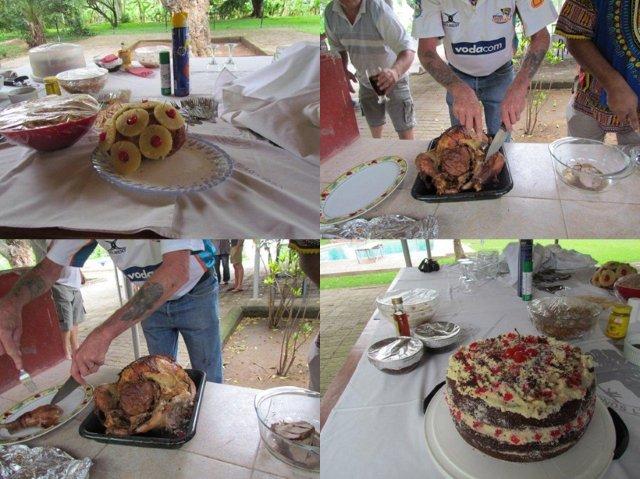 The ham, turkey, puddings, salad and a Black forest cake 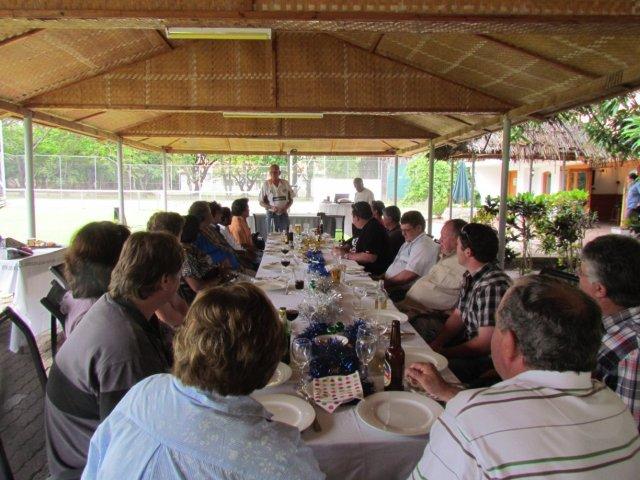 Before lunch started, Grant thanked the client WDL for supplying the venue and all who helped with preparations

The client, WDL only has South African expats while our company Caspian has a selection of nations under one roof: at the Christmas dinner we had an Arabian gentleman, Farouk, the plant general  manager; we have Juba, a Serb, a Phillipino, Indians from various parts of India, and two English South Africans (me and Grant) and Marnitz and Thys, two Afrikaans South Africans.

Rob, a South African Indian and Nsia,  a Tanzanian made up the rest of the party! Indeed a wonderful mix of people aged from 19 (Amanda and Andre's son, Zardo is visiting from SA) to 67, (Tilla) with five different religions and seven different nations represented! 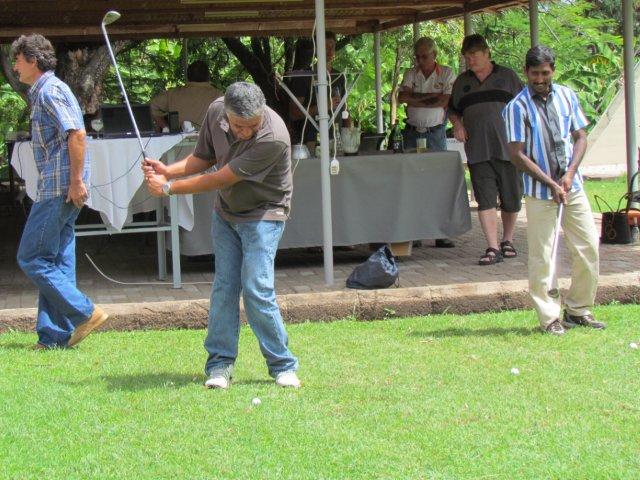 Lunch started sometime around one-ish and as with all good celebration meals,  ended after 5pm when Amanda and I finally cleared away the plates and sorted out the leftover meat and salads. The men played golf on the lawn (practiced driving) they swam, they danced (alone !) to the music supplied by one of the young lads from WDL while the rest of us chatted up a storm. We all enjoyed ourselves immensely! 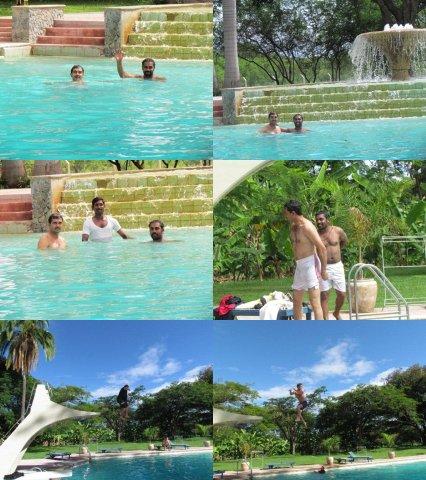 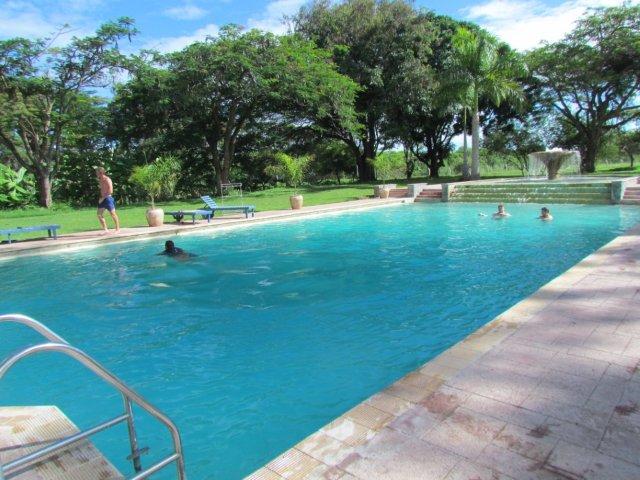 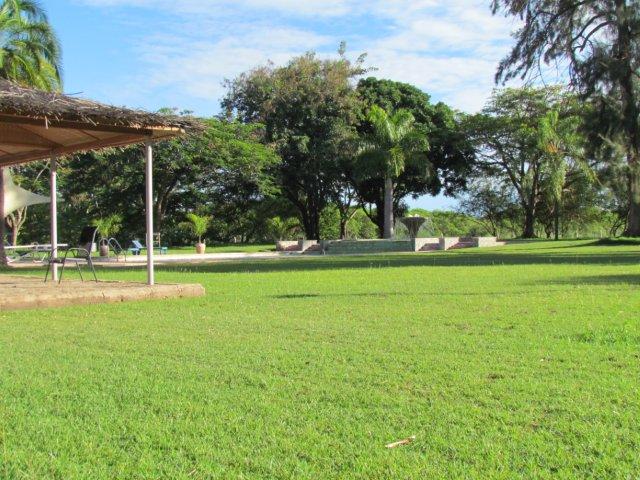 As we carried the dishes to the car late that afternoon, I turned around and snapped this scene. I wanted to capture the moment forever

Today is the last day of 2012. Grant and I have had and overcome several challenges here in Tanzania. We've also been incredibly blessed with two new grandchildren, Abby Kate (born to younger son, Angus and daughter-in-law, Amanda in March) and Israel, born to older son John and daughter-in-law, Debbie in June.

I also had the privilege of meeting fellow blogger, Gattina of Writer Cramps in London earlier this year. What a treat.
Grant and I have enjoy good health and continue to do so, for which we thank God.

So I now wish all my blogger-friends and all others reading this post,  wonderful, happy and healthy 2013.