My life these days

Towards mid-May I was a little absent from Blogger due to submitting an article to an adventure magazine. I always have photos to support my articles. As I sent my photos and writing to the editor early on the morning of the 12th, I phoned him and told him that I'd sent my contribution for which he thanked me. While traveling back from Cape Town a week later, I had a frantic phone call from the same editor; he had in his possession my photos but WHERE was my story. I knew I'd sent it but couldn't confirm it as I didn't have my laptop in the car with me. It would have been too late that night when I got home to re-send the story so the editor asked me to submit my story again next month.

Meanwhile the provincial newspaper did a "Focus on Marquard" feature. The newspaper editor wrote about several businesses in town but when she wanted information on the retirement center the sisters and admin manager said they wanted me, Jo, to do the feature.

In order to get mood photos I spent the whole day at the center. (I came home at midday and returned after lunch) When you take photos of people in their rooms or bachelor flats or homes, it's not a five-minute session. No, you sit and chat and get them to relax. Then you ask them if you can photograph them, for instance, one resident, Annetjie, was having breakfast on a tray in her flat. The time was 7am and I commented that she looked like a queen - she was already dressed and made up for the day. 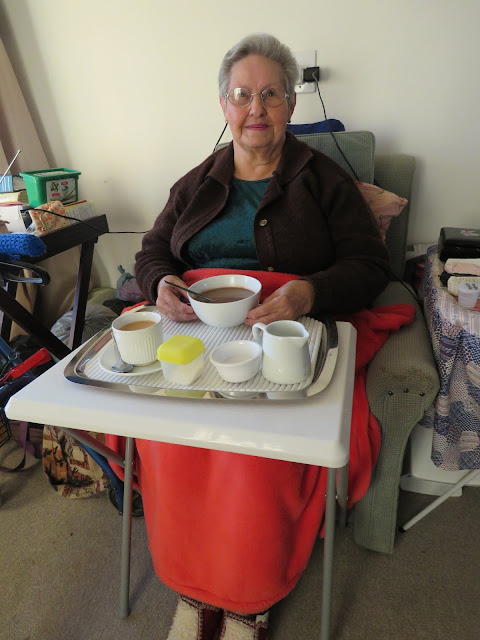 Annetjie enjoying her breakfast
At the frail care section, I took a photo of a carer helping a wheelchair bound patient with her knitting. When I approached them, I realized that the carer didn't know how to knit at all. The 90 year-old patient, Anna, whom I've known for years, asked if I would cast on stitches for her. She wanted to knit coat hanger covers. I cast on 22 stitches and showed Anna, but it wasn't enough. I eventually showed her what 32 stitches looked like and she was happy. Then she asked if I'd knit the first row! I had visions of standing there for the rest of the morning knitting Anna's coat hanger cover! But this is what it's all about in a retirement center. The residents, especially the elderly, just love attention. 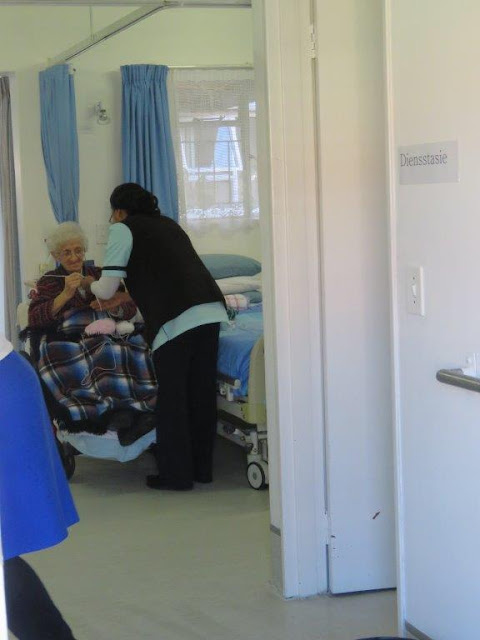 A  carer helping a patient to knit (or so I thought!)

The retirement center has two qualified sisters  - Christa and Luette and an assistant nurse, Ms Killian. The latter seems to have been here forever; a spinster she's known as Killies. 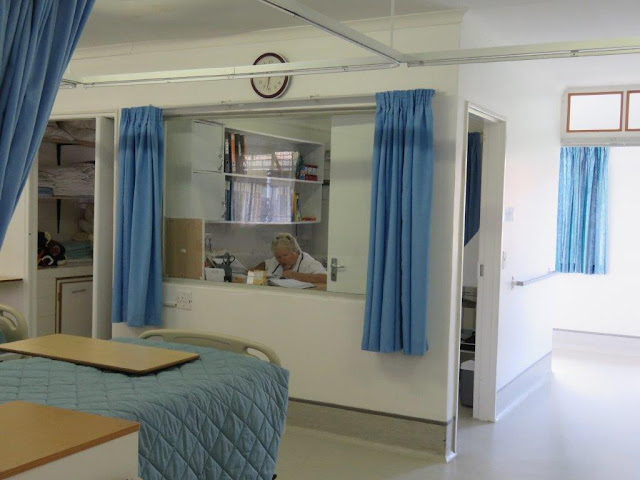 Ms Killian AKA Killies is on duty 12 hours a day, every day of the week. Here she sorts through the files in the frail care nurse's station 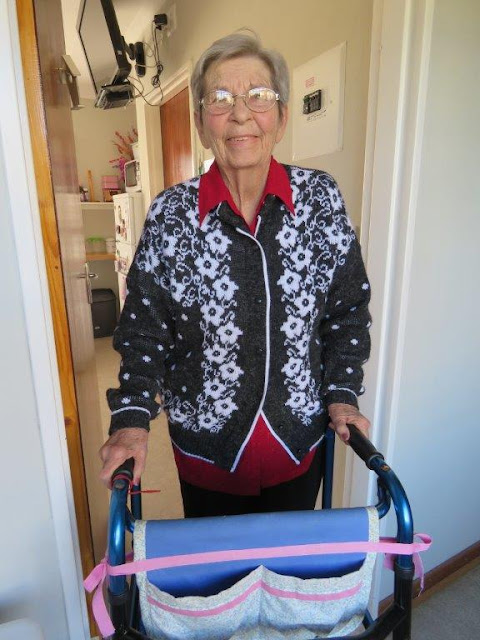 Maxi Azar is approaching her 90's. She's the widow of one of the three founders of the retirement center. She's my MIL's immediate neighbor 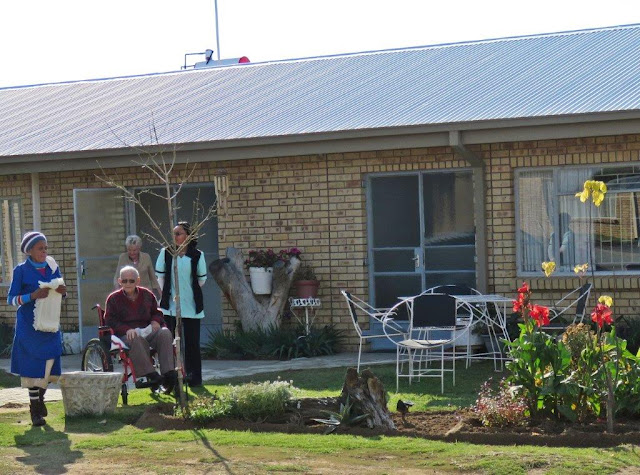 Patients are wheeled into the garden regularly. Here an elderly patient has been brought out while my MIL can just be seen exiting the door to come and sit in the sun as well 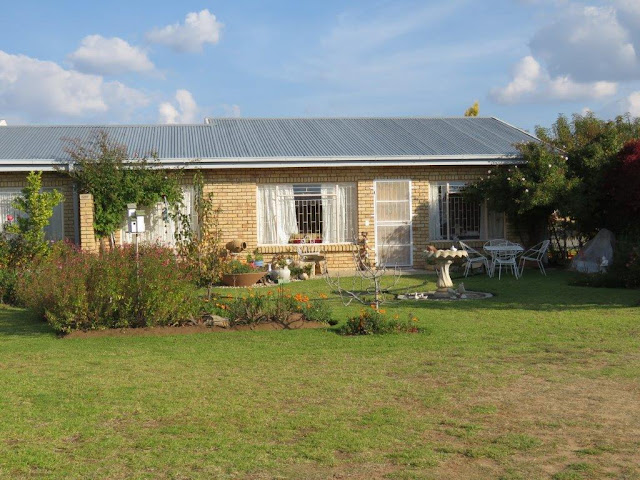 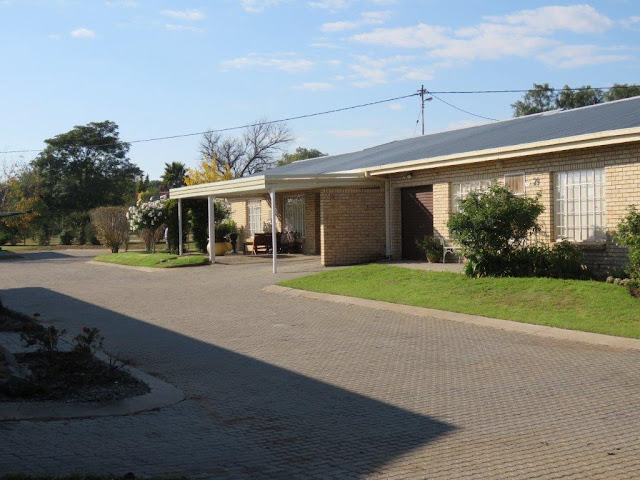 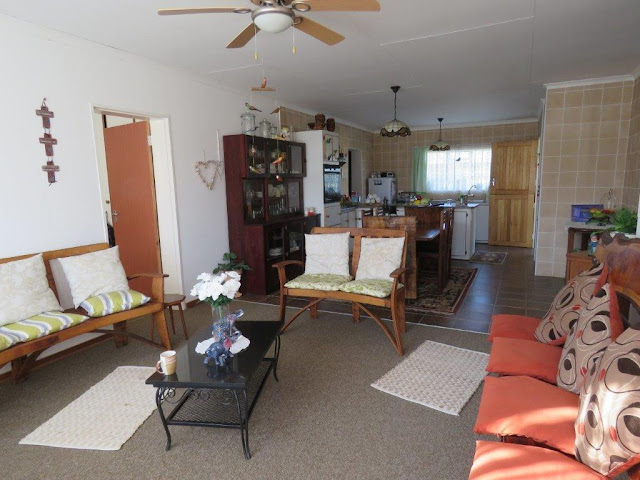 I photographed the interior of Rina's home, which image was chosen for the advert! 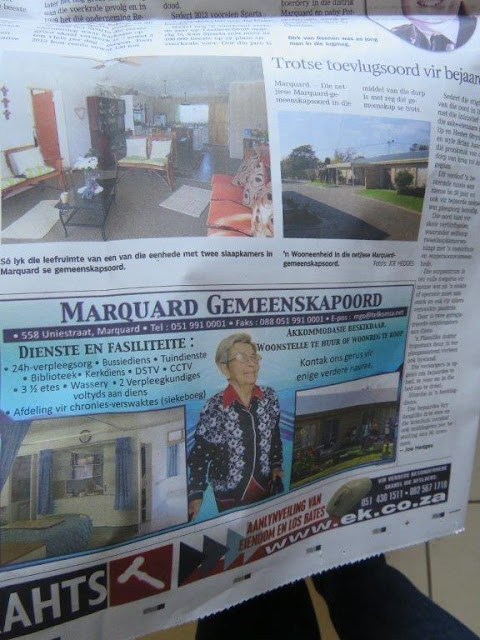 The article as it appeared in the newspaper