Good evening dear Blogger friends. Yes, I am still on planet earth; I've been hectically busy in the farm office and with accommodation.

Re the Covid suspect: yes, the man's wife phoned me on Wednesday 23rd December saying he'd tested positive and they wouldn't be able come after all.  Thandi and I went up to The Bunker that morning to clean after guests who had just checked out. I had already announced on our Berg WhatsApp group that I now had a vacant unit. The Valley community of accommodation owners and hosts were incredible. As they were getting enquiries which they couldn't honor, they passed my number to the guests. A friend, who is a booking agent,  was on holiday in the Mpumalanga, 1000km from the Berg. Such is the world of technology today that it was she who managed to book The Bunker from 24th through 27th December, Another hostess in the Berg contacted her friends. They'd booked to go to the beach in the Eastern Cape, but... our president had closed all the beaches for the duration of the December holidays. So she convinced her friends come to the mountains and to book with me. They stayed from 28th through 1st January. Via the reservation agency, Booking.com I had guests from 2 January through 5th. A Pretoria couple contacted me on Monday and booked from Tuesday until Friday. And so we are back in business.

On Saturday when Thandi and I cleaned between guests, I heard her cough - through the mask which we wear at all times. I asked her if she felt ill and she said she had a cough and was tired. By Sunday night her sister. Mavis phoned me to say Thandi was too ill to come to work the next day. I arranged with her to meet me with Thandi on the main road inside the township on Monday. I put a pillow and rug for Thandi to lie on the back seat; we loaded her (she was that weak) into the car and I set off to the clinic in town.

The clinic hours are from 8.30 am until 13h00 every week day. I paid for her appointment and the Zulu receptionist told me I was No 11. I said I would wait in the car with Thandi as she was too ill to stand in the queue on the pavement. Ten minutes later this same lady came out to my car and said she'd spoken to the sister seeing the patients. And had permission to move us up to No 3! She called me within five minutes and Thandi and I waited outside the clinic sister's office. Within another five minutes, the sister came out, asked Thandi what her name was. Then she asked me if I had paid already. I handed over my till slip and she took us into the rooms.

Thandi didn't have any of the Covid symptoms (although who knows with the new mutant strain rampant in South Africa!) Her temperature was normal; she didn't have a wet cough; she didn't have sniffles. But she had a bad dose of flu. My payment covered a course of antibiotics, pain pills, and a cough syrup. The sister also administered a Vitamin B injection while we were in the surgery.

With Thandi lying on the back seat covered by the rug, I took her back to the township. I'd phoned ahead and Mavis met me on the road. I told her that Thandi is to go to bed and stay there until she was well again. Mavis phoned me every day, keeping me in the loop and last night Thandi phoned me. Her voice still sounded reedy so I told her to rest at home and return to work on Monday.

So yes, while it's always hard physical work to clean after the last, and prep before the next guests, I've always had Thandi with me. We each have our tasks up at The Bunker. This week I did it all. Back home I also had to wash and iron the linen (Naturally Thandi hasn't been in to iron since our Saturday guest departures and the new arrivals) and I only have three sets of king-sized linen.

Ergh. It was hard work but I believe it strengthened my character! It's definitely toughened my muscles.

Apologies for the long  (wordy) explanation, but I had to tell you why I have been so errantly absent.

The beauty of having to rise early (especially early this week !) is that I experienced several beautiful sunrises.  I share one here with you. 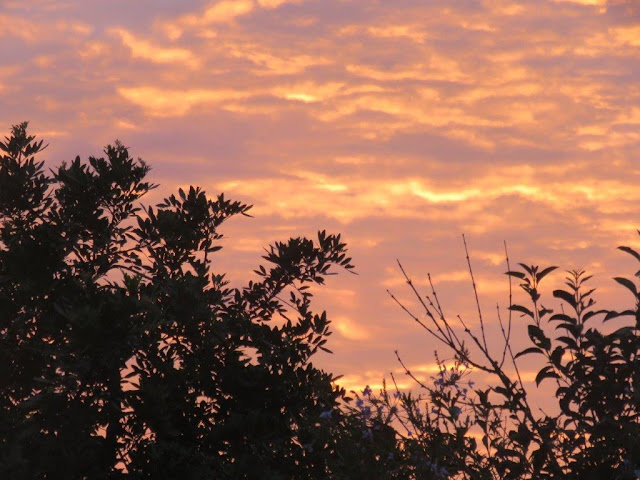 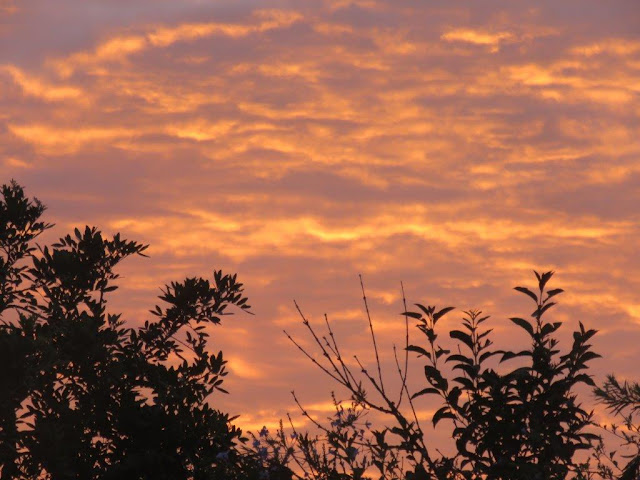 Stay safe and have a great day