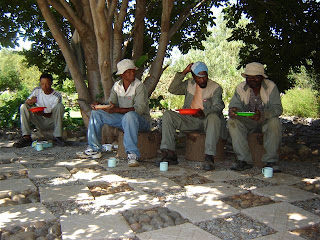 At the moment I am blessed with four gardeners. From left: David and John, Simon and Kleinbooi
A year would not be complete without posting about my extended family. Under normal circumstances I have Emily, housekeeper and maid who “does” for me in the house. I also have two gardeners: John and David. You can read about John here. 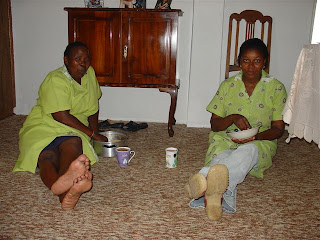 Even though there are three areas to eat in my home (dining tables and chairs) Emily, left and Albertina prefer to sit on the floor or like the men in the top photo, on logs/stones under a tree

Emily, who was the first baby to be born in the Clocolan hospital (a town 34km/ 21miles away) on 1 January 1953, is the same age as I. She is a widowed mother of five and a grandmother of two. She lives in the township adjacent to our town. Her youngest daughter, Erica and HER nine-month-old baby, as well as Emily’s oldest daughter’s seven-year-old son live with Emily in a neat, two bedroom- with-an-open-plan kitchen/sitting-room brick and tile house. My husband has just had a shower installed for Emily as well as the toilet moved from outdoors to inside the house. Emily came to my door in 2002 and asked for work when I needed her most! She came to help me clean up after having an extension built onto my house and stayed. She is looked after my home and [many] pets while I lived in another country for three years. 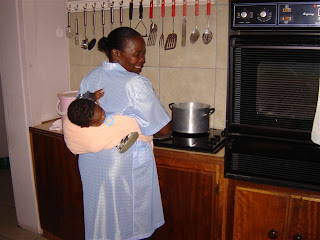 Emily with her nine-month-old grandson strapped to her back, while she works

This week I found employment for Erica, who could not continue with her school studies because she fell pregnant while in her final year. The father of her child, a youngster himself, is not permanently employed and seems to have disappeared completely. Emily has brought Erica’s baby boy to work,and with him tied securely to her back, she gets on with her chores. 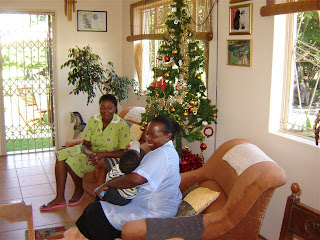 Albertina and Emily relaxing a while before breakfast


John, who is 26 years old, has a common-law wife and lives in a tin shack in the township. He has no children, as far as I know. I think a female member of his wife (aunt/mother/wife's sister/cousin - who knows?) lives with them as well. She has two or three children who also live in this house. John is open to suggestions on how to budget (i.e I deduct a monthly amount from his salary and Emily pays his account at a furniture chain store in another town) and to care for his wife. He also seems to be faithful to his wife which is quite unusual.

David at 34, has no wife or children, although he often borrows money from me for taxi fare to fetch his “children” from a neighbouring town! He lives under dire circumstances and tends to drown his sorrows at the Tavern when he has been paid. Emily tells me that he lives in a shanty similar to John's. Apparently he lives with his mother, although this is not clear. There is also a younger female in this house who David assures me is not his wife. I’ve deduced that perhaps the older woman, who calls herself his mother, is a relative who took him into her home as an orphan many years ago. Now, according to her, it’s pay-back time. Perhaps the younger woman is her own daughter. David has an old blanket on the floor in the corner and I think when he arrives home late and a little worse for the wear, the women go through his pockets and remove any money he may have made that day. It’s all very sad, but a fact of life. So many unmarried men live like this in the township.

In 2005, my darling husband had a shower built adjacent to the gardeners’ toilet, at the back of the garages. Both David and John have no running water or flush toilet in their homes in the township and I felt that this bit of luxury here at work could help towards making them feel better at home. (who doesn't like to be fresh and clean?) This year, when the weather turned cold, I realised the men weren’t showering as normal before going home. Obviously the water was too cold and so I asked my husband (dear kind husband!) if we could install a gas geyser. He agreed and it was done. Now the men can shower winter and summer. John is responsible for keeping their ablutions clean at all times.

John and David came to work for me as casual gardeners in July 2006 when I returned from West Africa. They are now permanently employees and firm additions to our extended family!

At the beginning of October, my older son sold his house here in town and together with his wife and children, is attending a discipleship school in Kwa-Zulu Natal. He has kindly given their housekeeper, maid and childminder, Albertina, as well as Simon and Kleinbooi, the gardeners, six months' notice. All three these people come in to help here at my house in return for two cooked meals (mieliepap, stewed meat and vegetables) while my son continues to pay them.

I have placed posters and flyers all over town advertising Albertina as a domestic. Simon may be employed by the people who bought my son’s house, else I’ll advertise his skills in the New Year as well. While working for my daughter-in-law, Kleinbooi had his eyes tested and he was fitted with prescription glasses at my son's expense. My daughter-in-law also took him for his Code 14 driver’s licence which is the heaviest duty driving licence in South Africa. I’ve advertised Kleinbooi’s skills and we’re hoping to get him employed in the near future.

Even though it is all very well to help people like this, it is vitally important to try and motivate them to help themselves as well. I notice that all three my son’s employees are not looking for work elsewhere, even though I've exhorted them to do this.They are quite comfortable being paid by my son and being fed by me. They all help in and around my house, by their own choice, but I, for one, don’t want them to become complacent in this situation. It is human nature to sit it out while the going is good (being paid, fed for now...) until the end of February.

Emily is on a Pension Scheme. I initiated it myself; it is not law in this country and many domestic employees are not on any type of scheme to help them when they can no longer work. All three my employees are on Unemployment Insurance Fund, which is compulsory.

So there we have it: a long story about my extended family that I love dearly. However, as with any adult family members who are in your home, there is a fine line between helping them to improve their circumstances and encouraging them to become totally dependent on you, the benefactor. A work in progress...