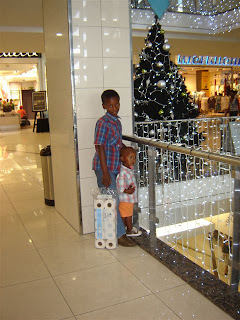 Two little boys enjoying the festive atmostphere of this,
a newer and very modern mall

We have invited my younger son and daughter –in-law, her parents and their other daughter, son-in-law and granddaughter to join us for Christmas lunch at our home. My mother-in-law and her new husband will travel up on the 23rd to spend this blessed time with us as well. This is the first Christmas since 1999 my husband will spend at home. (I spent three Christmases with him in West Africa – more about that later) 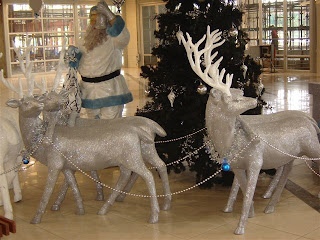 Each mall had different themes and colour schemes.Here the colours were cool and frosted

Last week my husband and I went to the city to start preparations, and to get in early buying the gammon, chicken (hubby does not eat turkey), mince pies, Christmas crackers and serviettes. The whole excursion was a pleasure. All the malls are decked out to the nines. Each one is beautiful yet different from the previous one. Christmas music played overhead as we wandered through the malls. The shelves were stocked to overflowing with pretty gifts and gift sets. 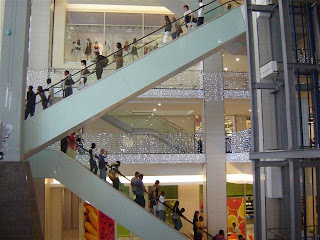 The escalators were a-glitter with thousands of little lights 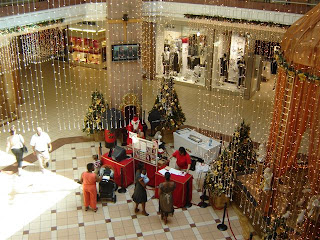 In this older mall, the colours were traditionally red and gold.
Here mothers and children cue to see Santa

I know, I know, Christmas is grossly commercialised and all that. I agree totally. So much of Christmas and what it means, is lost in frenetic [over]spending and general overindulgence. Because it is a special year where we will be together in our home as a family, I have planned Christmas with a fine-tooth comb. Nevertheless, I’ve not lost sight of the fact that the Babe in the Manger, whose arrival we celebrate at this time of the year, is the Lord and Saviour of all. He came to earth to save us sinners from eternal damnation; all we have to do is make the choice to follow Him. I also know that it’s no use being pious and attending church on Christmas Eve / morning and then carrying on with a secular life for the rest of the year.

Above all, I’m working to a very strict budget. It is pointless buying expensive and often superfluous gifts for family and friends, heaps of unnecessary and mostly fattening food and then being stressed out for the first six months of 2009, trying to repay the credit cards. 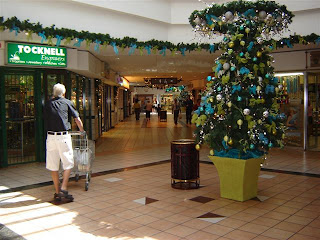 This is the oldest mall in the city (precviously known as a Shopping Centre) It was brightly decorated with turqoise and silver. On the left is my husband, avid shopper and a woman's dream shopping partner 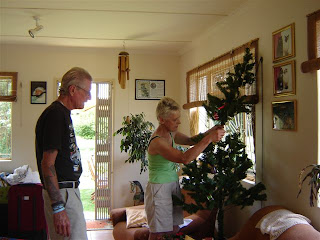 GranJo splits the Christmas tree while Granddad, who can fix ANYTHING, looks on

As mentioned in my previous mail, my older son, his wife and our grandchildren spent the past weekend with us. They will be working (on outreach ministry) at Y-WAM over Christmas so we enjoyed a very special and outdoorsy fun-filled weekend together.

On Saturday morning, I walked to the spare room closely followed by two eager young helpers. I turned around and said : “I wonder WHERE I put the Christmas tree last year?” My granddaughter pointed excitedly:” In the cupboard, GranJo!” and two-year-old Grandson shouted: “Inna cubhard, GanJo”

I placed the boxed Christmas tree and a carton of decorations onto outstretched little arms; I carried three boxes of lights (I needed them to work when we eventually turned them on!) and together we all walked to to the entertainment area. I set the tree up on a low table between two easy chairs. By now the children were wildly scrabbling through the box of decorations with "Ooh GranJo, look at this one" from my granddaughter. Little guy, not to be outdone, fished out a reindeer and waving it in my face, say : "Ooh GanJo, can I pud dis one ub?"

We’d already begun to hang a few glitter balls and shepherd’s crooks, when I realised that the tree would not remain upright for the next two weeks. Granddad was consulted where he was busy in his workshop and he duly came inside to collect the bottom half of the tree. Within a few minutes he’d cut a square and sturdy base and fastened the “stem” of the tree to it. We adorned the tree with all the decorations in the box ; finally I lifted my granddaughter who placed the star on top and we strung one strand of lights around the tree. The other two sets of lights are always attached and threaded through the security bars on my street-facing window; this year was no exception. This year it took a bit longer and some of the lights are facing inwards, but that is what makes it such fun! 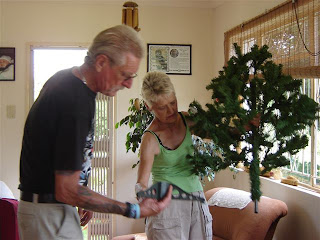 Granddad takes the flimsy plastic stand, which he replaced with a sturdier base 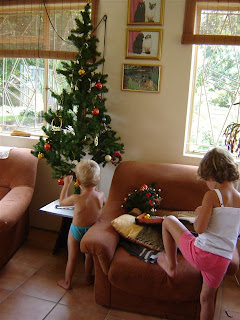 The children had great fun decorating the tree 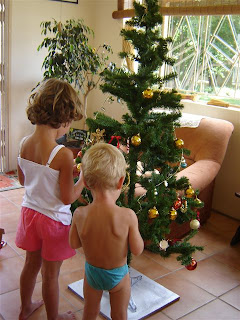