On Sunday, which is our extra day off, we drove into the desert again. I'd read about more temple ruins and wanted to see them. So off we went!

We left at 6am so we saw a spectactular sunrise about 45 minutes out of the city. I photogaphed it, of course, but that is a post for later in the week. 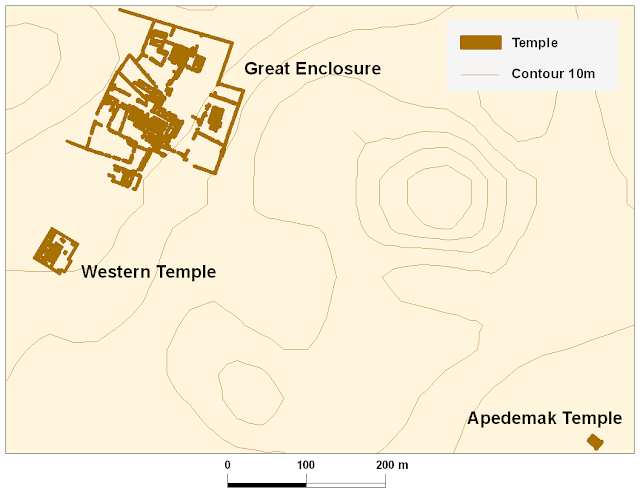 Above is a map of the Musawwarat es Sufra temple ruins in the Nubian desert. The Western Temple is actually the Lion Temple, (See below) and the Apedemak Temple is at Naga which I posted about last week.

We arrived at the ruins at about 10:15 and it was an overcast cool day. Brilliant for sight-seeing (or tramping around in ruins) and for photos! 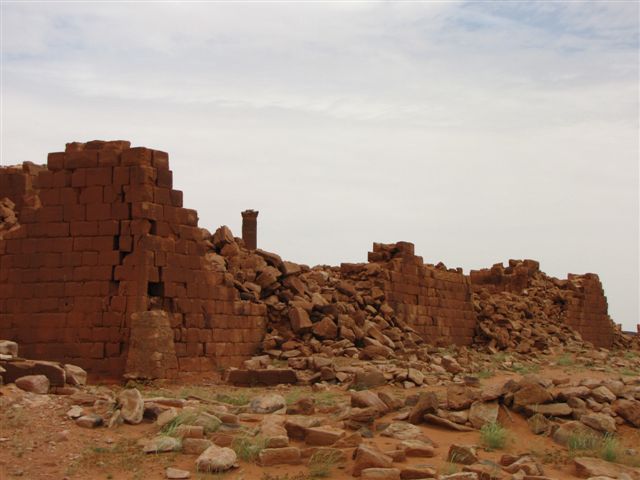 Ruins of the Meroitic temple at Musawwarat es-Sufra. This temple complex, called the "Great Enclosure", lies south of Meroe near the Sixth Cataract. It may have been a pilgrammage center or a royal palace. 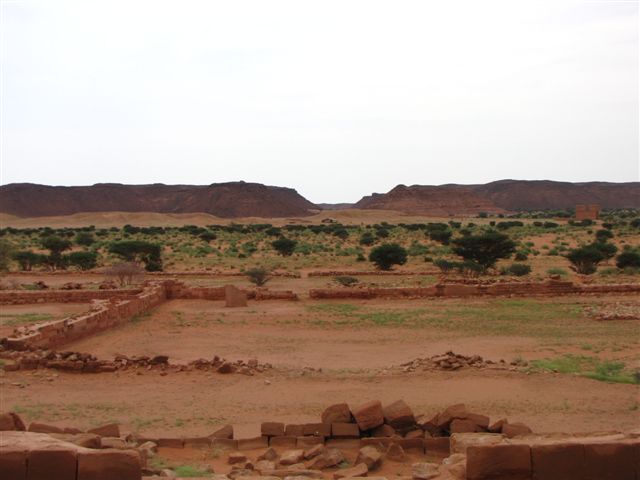 The temple complex of Musawwarat es Sufra is the largest set of Meroitic remains in the Sudan. The complex site consists of a large complex called the Great Enclosure. This is a rambling structure of low walls, toppled columns and several reservoirs.  This complex dates from the Napatan period of the Kushite history and was expanded and rebuilt throughout the rule of Meroe. 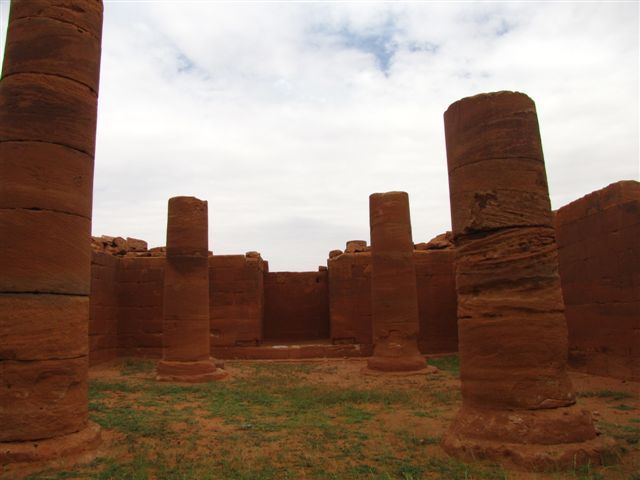 At the centre of the enclosure is temple 100 with a carved colonnade. It was possibly also used as a throne room 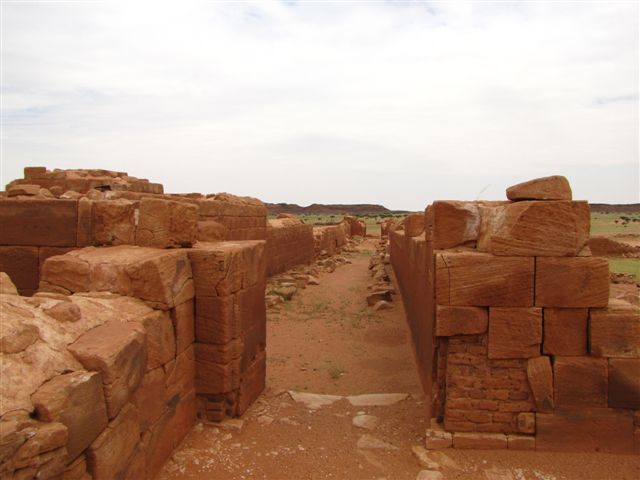 Temple 100 was approached from the rear by a long corridor 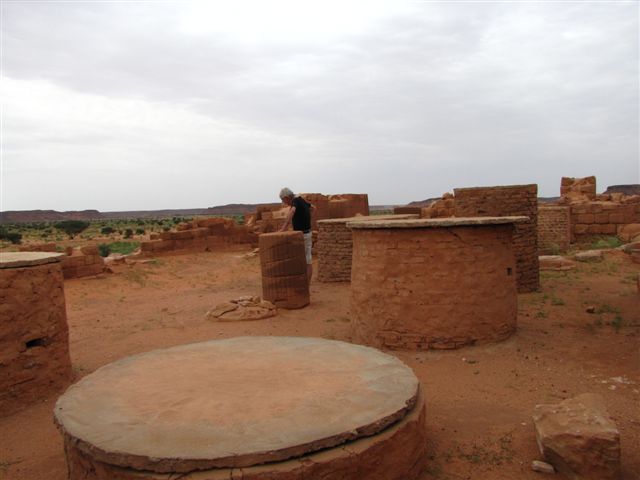 In the foreground are reserviors within the complex. Further along my patient husband rests against one of the broken pillars while I take photos! 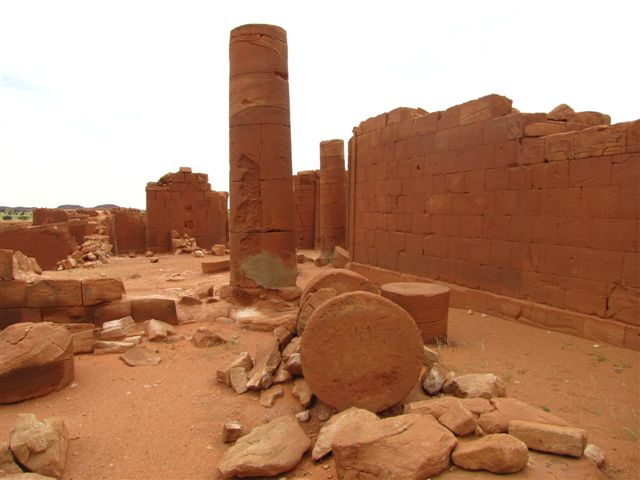 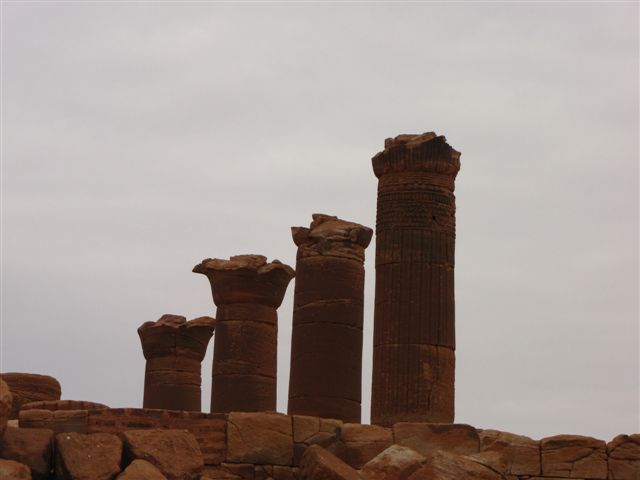 Temple 300 sits on the outer edge of the Great Enclosure. Smaller rooms and corridors link these three temples with the whole surrounded by enclosing walls 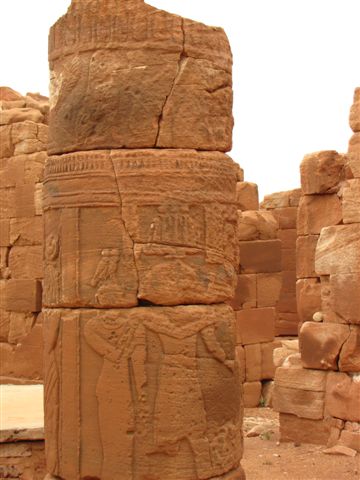 The Great Enclosure is liberally covered with carvings and ancient graffiti most typically of altars and images of Apedemak (see the carving of Apedemak, the man with a lion's head) 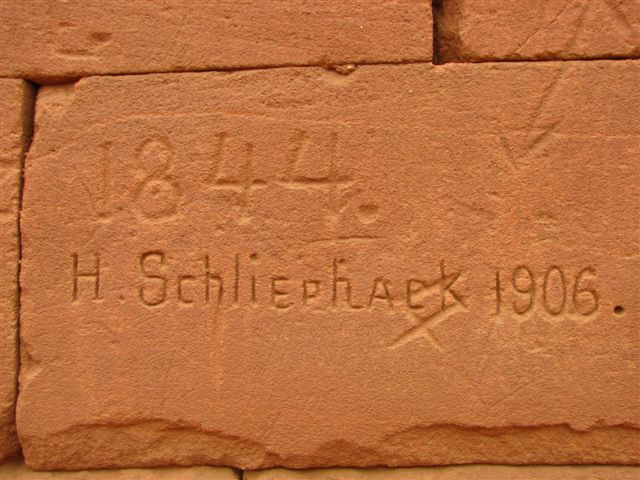 But more recent visitors have left their mark too 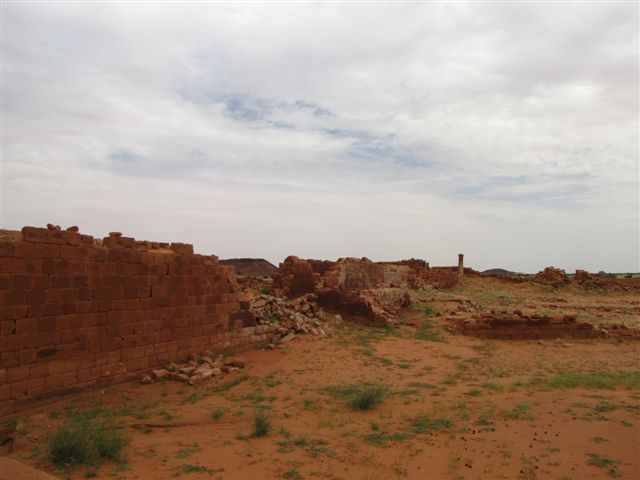 The most favoured explanation for the Musawwarat Es Sufra is as cult and pilgrimage centre for Apedemak. The open parts of the enclosure may have been used to house pilgrims and animals used in religous ceremonies. The frequency of elephant carvings throughout the complex and the elephant statue  in the Great Enclosure suggests that elephants may have been trained and used here. The low ramps would have allowed for access for these animals. 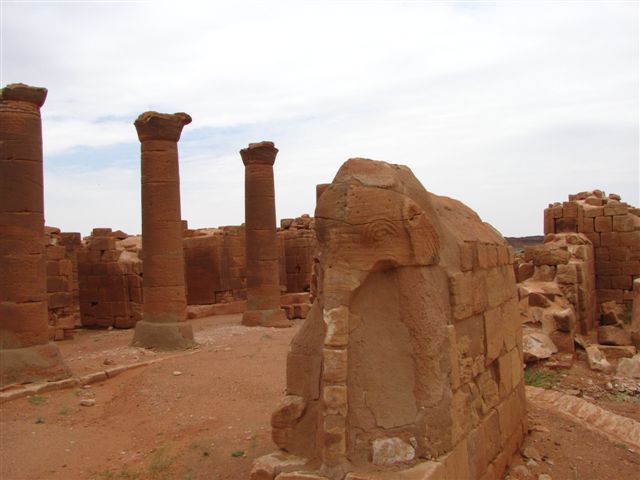 Elephants served a military function, but cultural influence from the South is apparently the reason for their having a religious significance, now lost to us. 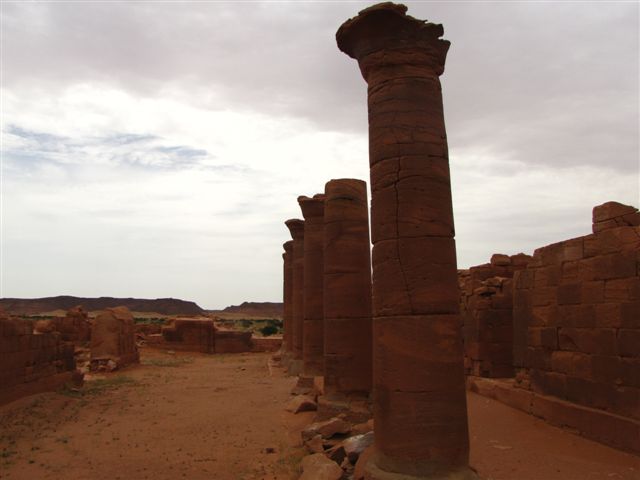 The size and scope of the Great Enclosure is an indication of the power of Meroitic power. I'd read that the complex is still an active archeological site and during winter you will find German archeologists directing the work. I was careful not disturb anything. But while in there I felt perhaps this is a far world from that of Indiana Jones, but no less thrilling or mysterious. 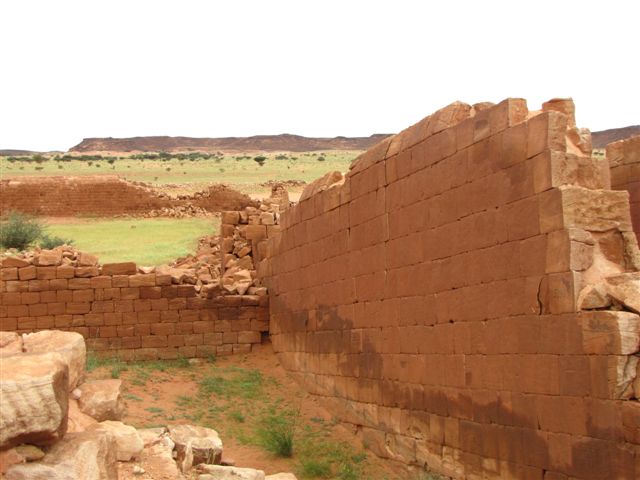 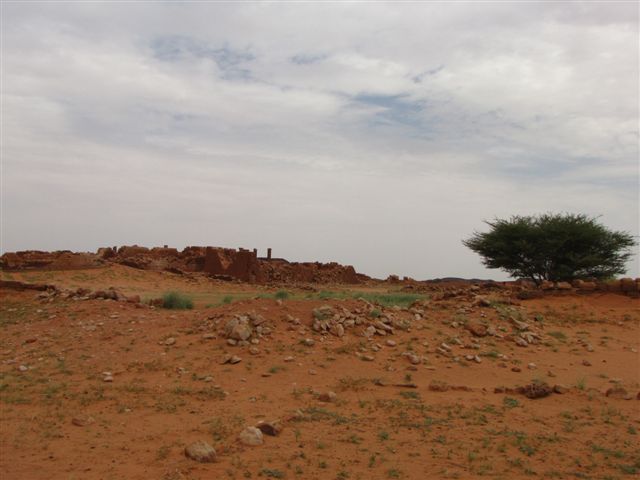 As we were driving away, I couldn't resist one more photo of the ruins, with the ever-present paperbark thorn tree in the picture! 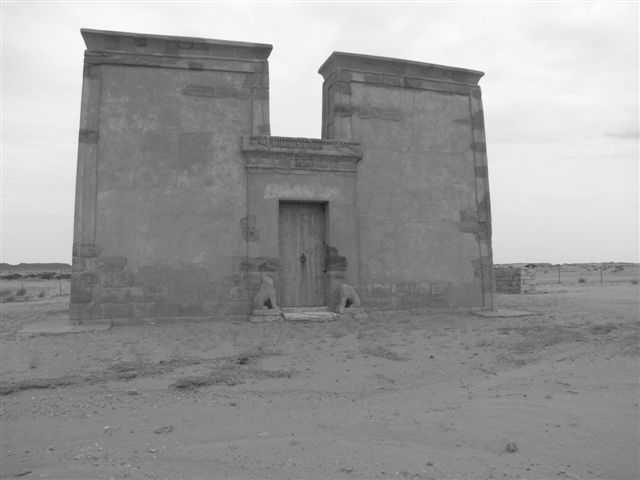 One kilometer from the Great Enclosure is the Lion Temple which was built by around 230BC by King Anekamani, one of the first kings to be buried at the pyramids of Meroe. I played around with the settings on my camera and in the end this was the only photo worth posting! 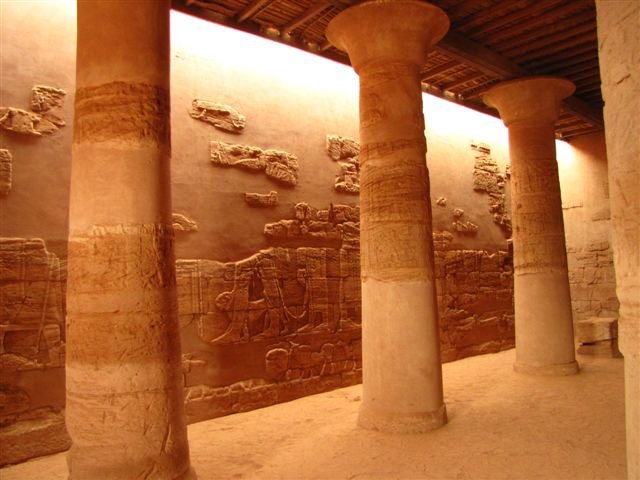 The Lion Temple was reconstructed and beautifully restored by Humbardt University in 1969 making it - with Naga - the finest standing Kushite temple. (See last week's post on Naga) 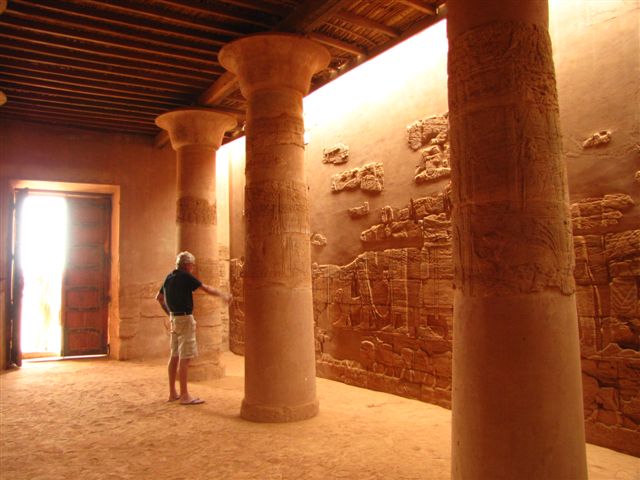 Grant points out a carving of a lion being led by a human. Apedemak was known as the Lion god 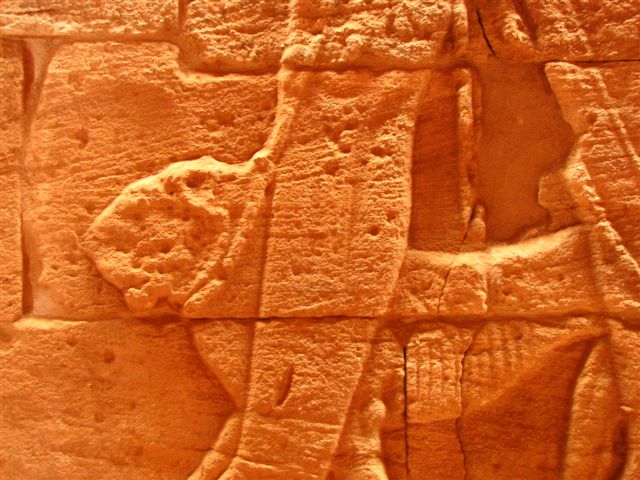 A lion on a leash being led by a human 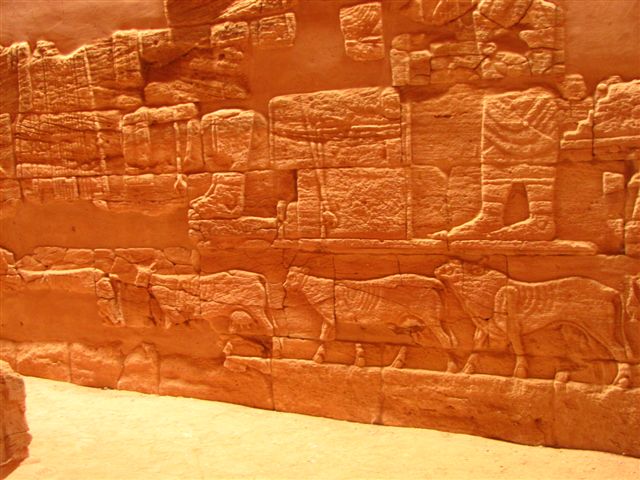 Sheep depicted in the carvings on the temple walls 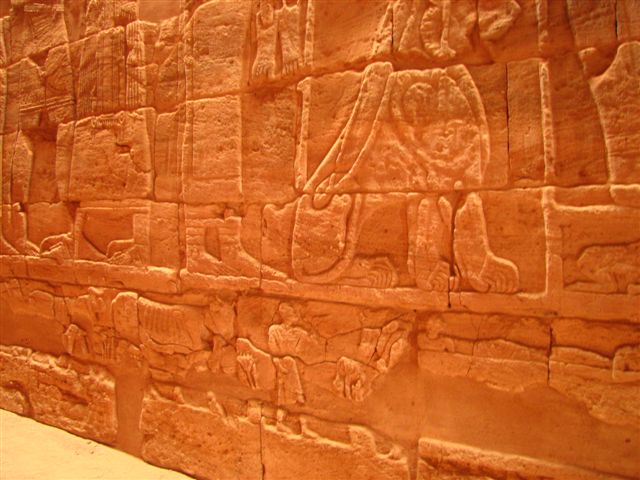 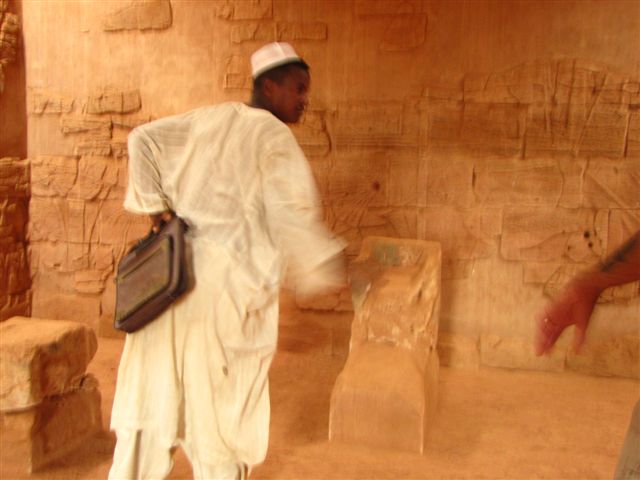 The Arab gentleman (who had "Ticket man" stencilled on his brief case and we had to pay him before we could see the temple) shows us that a table - part of which can be seen on his left - ran in front of the king's chair, visible in the centre front. (PS both he and Grant moved their hands as I took the photo) 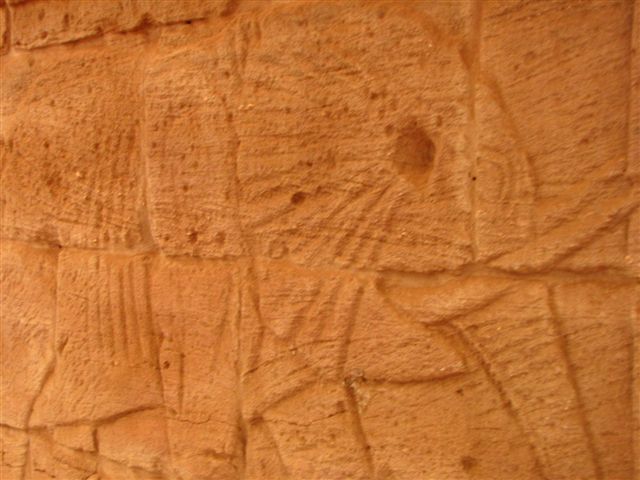 This carving showed elephants being led by slaves (according to the online guide book) but some of the images have obviously crumbled since the guide was written. I managed a close-up of one of the elephants 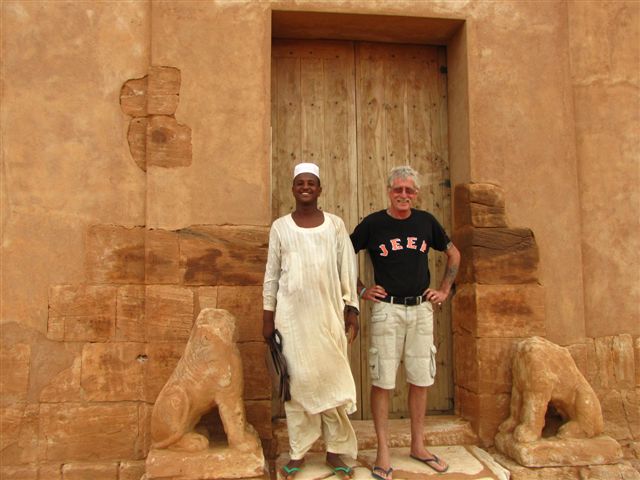 The Lion Temple from the outside. See reliefs on the walls 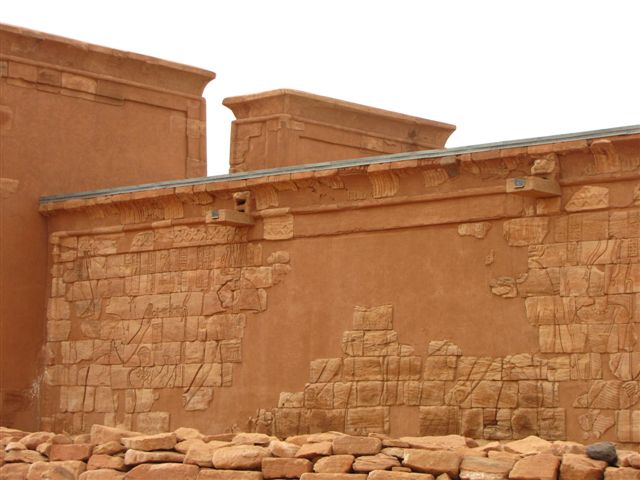 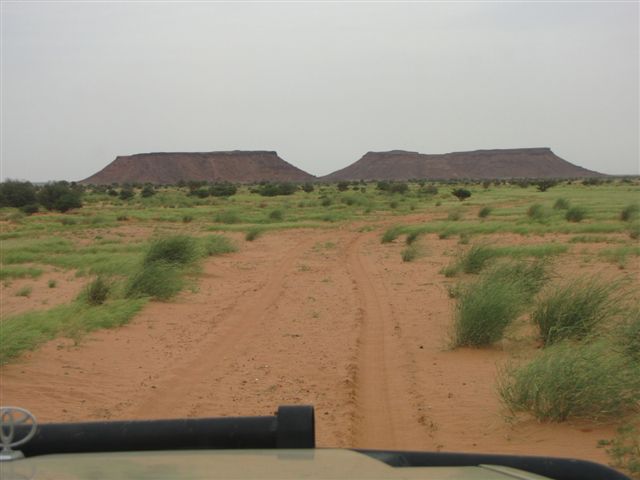 And then it was outward bound again. Not yet homeward; we saw and did a few more interesting things which I'll post about tomorrow
As we drove off back to the highway some 20km/12.5miles, I was just beginning to wax lyrical about the Great Enclosure (I loved the Lion Temple, but could have meandered around the enclosure all day!) Grant said, "Well, I enjoyed the Lion Temple but not the other one - that was just a pile of rubble." *sigh* !
Source: Some Internet
Other: Mine own
To see other people's worlds, click here
The Arabic word for elephant is fyl (pronounced feel)
The Arabic word for lion is al-ʼSd (pronounced ah-ssid)
Posted by Jo at 3:30 AM