For the past six months I 've had incredible trouble with anonymous comments. When I go out on break to SA, I don't post daily and this is when the problem worsens. When I get back to Tanzania, it's as if those anonymous "people" just hang on and keep commenting. It's become very irritating, to say the least. Out of ten comments waiting to be moderated, normally five are anonymous. Grrr.

I don't have word verification on my comments but have changed the settings from "comments allowed from anyone (which includes anonymous)" to "comments from people with ID's". I hope this helps and I also sincerely hope that my regular or future visitors aren't blocked from commenting. If you have problems trying to comment on my posts, please contact me privately and let me know.

On the home front, Ambrose has kept readers up to date regarding the kittens which we've babysat for the past two weeks and four days. Their yoomen parents arrived back from their break in South Africa today. When they came to collect their house key from me (I kept an eye on their home in their absence as well) they took the kitties home with them. They said they missed them incredibly and were thrilled to be home just to see their "children" (And this from a sixty-something couple who's never owned pets !)

While they were here, I made a toy ball with a rattle inside. Although it's very amateur and my very first attempt at this, the kittens loved it! (BTW, the kittens have only been gone for a day, and we're missing them terribly!) 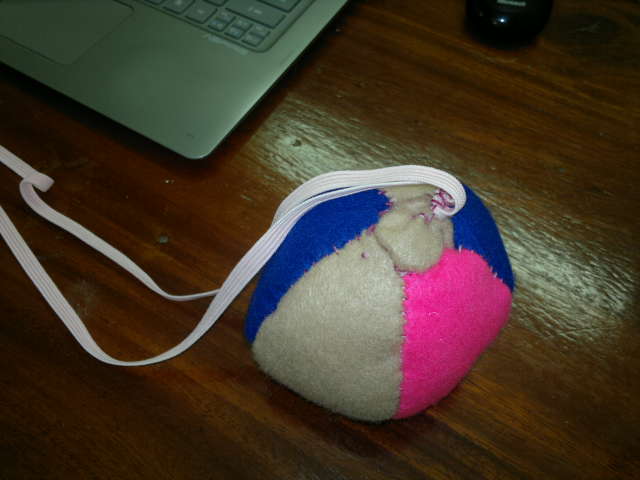 My first attempt at making a toy ball for the kittens 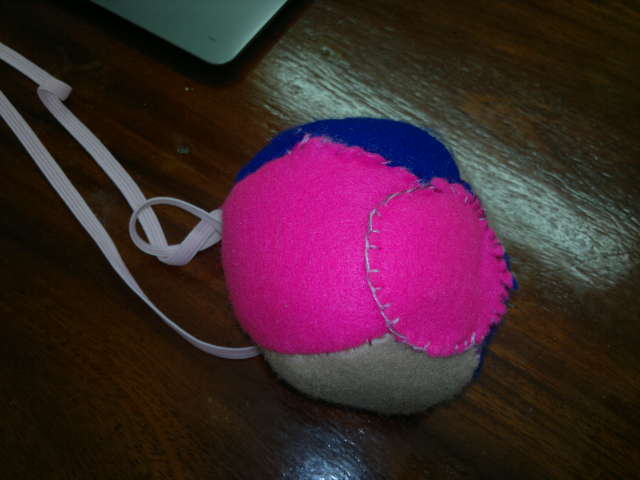 The elastic attached to the ball, was a great hit. The kittens grabbed it and ran with it, bouncing and rattling merrily along behind them!

I'm also still helping Amanda make toys for children. While I manage to make one toy, when I arrive at her house, I see she has made about two dozen in the same space of time! Amanda, who's very encouraging, always tells me that she used to make toys for markets in South Africa and when you work for money, you tend to work very quickly! She also reminds me that while she sits and makes toys all day, I am running the Guest House, caring for 20 expats' needs; expats who make lunch hour in the dining hall look like a gathering of the United Nations (albeit made up of hard-working delegates!) supervise a staff of twelve people and also trying to fit in writing my articles for magazines! 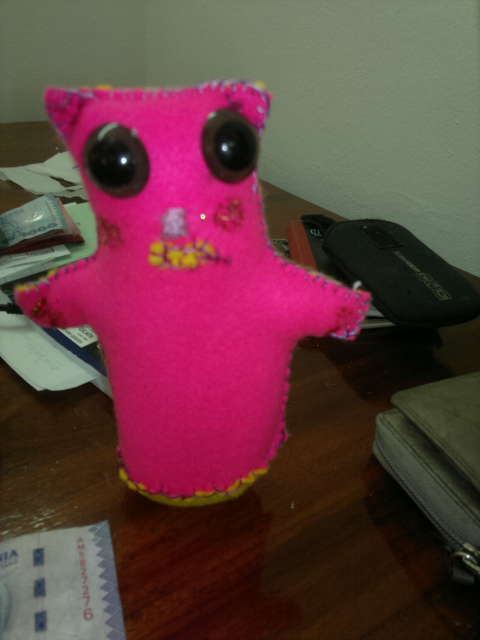 Another rattly toy which evolved from my humble fingers

I hope you're all having a great week already. We're on the home-stretch to going out on leave, so it's a great week for us!
Posted by Jo at 3:30 AM