Hello to Mum's Blogger friends; this is Ambrose. All's well in our household. Mum posted a lot about the doggy so I don't have photos of him here. Mum says I look like a gipshun cat in the photo below. I don't have Unca Shadow anymore to ask him what a gipshun cat is, but I think I'm a very handsome gipshun cat. 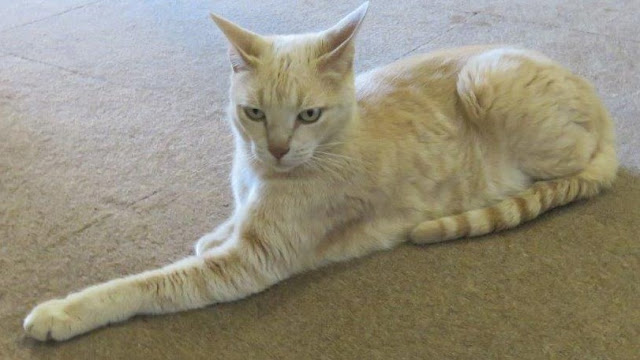 I, Ambrose, the gipshun cat 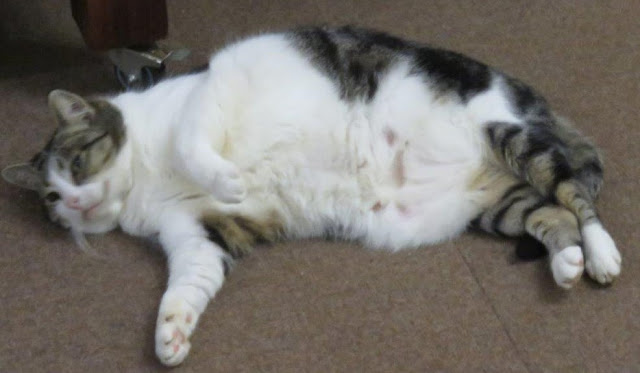 Chappie relaxing on the carpet near Mum's desk 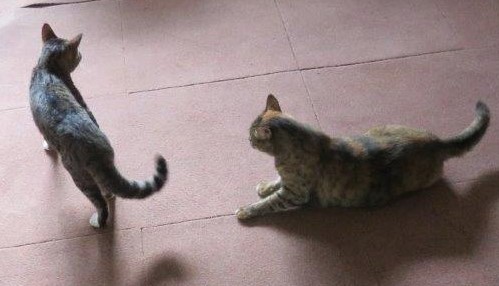 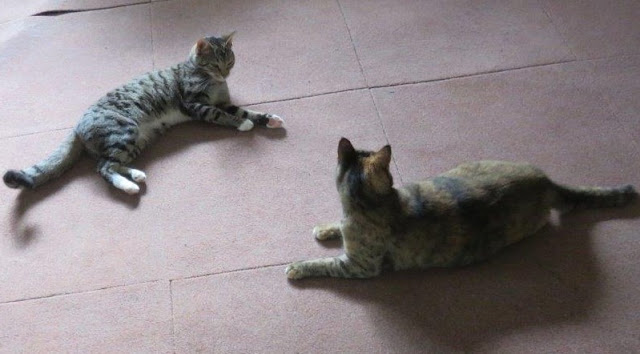 Mama and Missy love to play 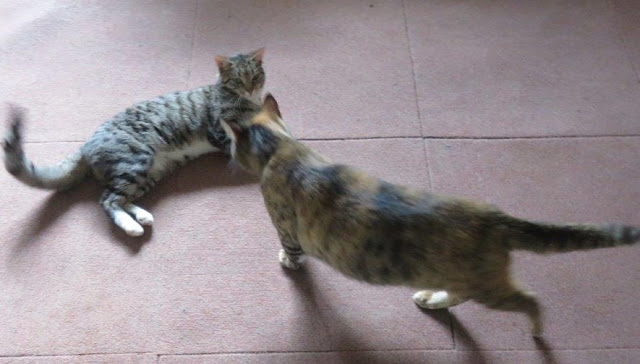 Tails flicking and ears back, the kitties mock attack 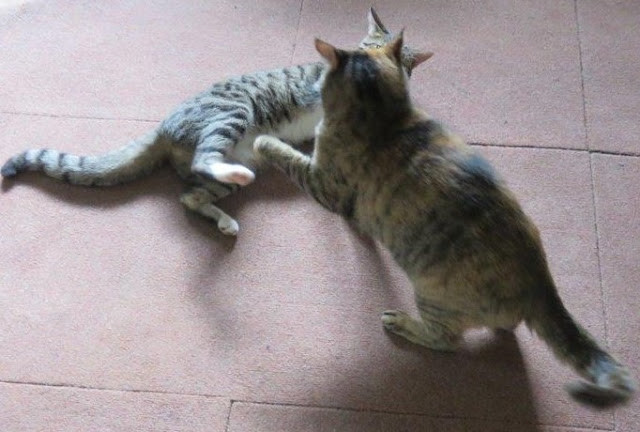 Missy lifts her hind legs as Mama jumps on her 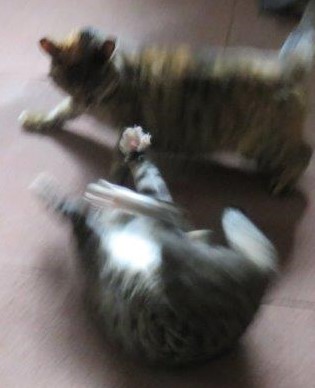 Mama rolls Missy over onto her back 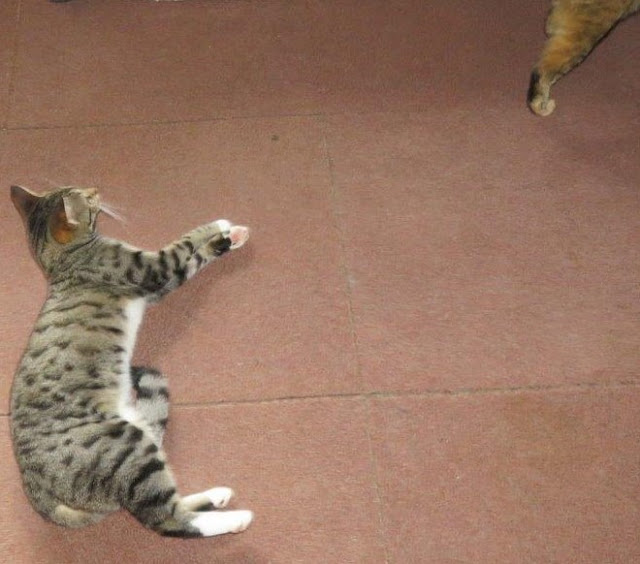 Then Mama walks away, not wanting to play anymore
Missy and I also have a game sometimes. Mama and I still don't get on with each other. She frightens me with her hissing and then Mum scolds me when I attack her for real!

Author's note: This is too complicated for Ambrose to post so I, Jo am adding my bit here. This week we had a big scare. On Sunday night I walked outside and Missy dashed into the garden. Over the past months I have become confident that she always returns. And she always does. Even if I am in bed already. She arrives at my front door with window panes, and meows which alerts me and I let her in.

This night she never arrived. I hardly slept. I kept getting up and going to the front door to see if she was there. I continually opened the door and quietly called her. Quish-quish.

Next morning as the dawn broke, I was sure she would come running across the lawn onto the veranda and ask to be let in.

All day I called her. I showed her photo to all the Star and Nurse who work for Janine on my right. And Thandiwe (who was frantically looking for Missy as well) told Joyce, who works for Ronnie to look out for our baby cat. I told Derryn about her disappearance and sent her a photo. She said she'd check around their large garden in case she'd got in there, and heaven forbid, been killed by one of their many dogs.

Missy has JUST turned three years old this month. A young farmer found her sitting next to her dead mother who had been hit by a farm machine. He brought her to Collette at the shopping center on 4 January 2018. We gauged her to be about five weeks old. As you know, (because I posted about her regularly) she spent most of her days sleeping on my desk in the shop and often on the counter, much to the delight of shoppers who entered my shop.

I eventually brought Missy home, but for almost a year, I kept her indoors. I just didn't not feel comfortable letting her out into my garden; especially with the three dogs next door.

Eventually I let her out, and she has had the run of the garden. And then we progressed to me letting her out at night and her coming home every time.

My sister who also knew my kitty was missing, WhatsApped me on Monday night asking if she had returned. I said no.

That night we were geared up to hear a message from President Cyril Ramaphosa. At 8pm/20h00. There is a second wave of Covid19 and we were all worried about going back into hard Lockdown again. The radio announcers were referring to his talk as the "family meeting." At  19h54, I walked to the kitchen sink and as I turned around I saw the little pointed face through the window pane. I yelled: MISSY  so loudly that she ran off towards the right. I opened the door and diving onto the cat, picked her up and brought her inside. I was beside myself with relief.

Skabby jumped up and sniffed at Missy. Mama came through from the bedroom and sniffed her from head to toe.

Missy was very subdued. She kept grooming herself and when I stroked across her back and down along her tail, I felt grass seeds stuck to her fur.

When I told Ronnie (who also knew Missy had been missing) about her having grass seeds stuck to her fur, she said she probably went walk about through the cattle paddock below my cottage. And into the grassy fields beyond. Something: perhaps the cattle stomping in the dark or dogs barking, scared Missy and she went into hiding. My sister kept reassuring me that cats normally return home at night when they deem it safe because dogs and other creatures are sleeping.

The rest of the week, Missy has hardly moved from her sleeping place on top of my cupboard. When she is down on the floor and Skabby makes a sudden move, she puts her ears back and cringes. She has been out on the veranda but as soon as the dogs next door start to bark, she dashes indoors. 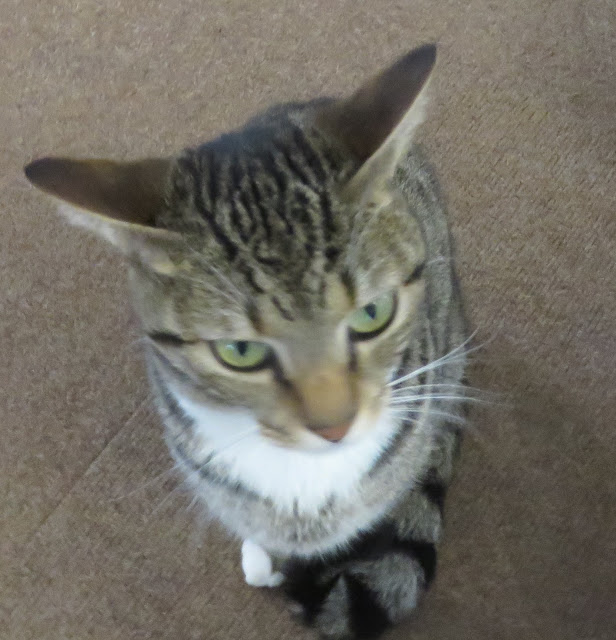 I am just so very grateful that she returned safely. Thandiwe, when she arrived on Tuesday morning was so happy to see "Baby" had come home. She kept saying Nyabonga Nkosi yami

(Thank you, my God) with her hands covering her eyes; which  choked me up all over again!

Thank you, God for this story's happy ending.