You’d think with my huge garden, I’d not bother with container or indoor gardening. The thing is, I have a large patio/courtyard. The entrance to the house is on the side (access is across the courtyard, where everyone parks) and I like to keep the whole area pretty and welcoming!

A few weeks ago, while visiting the nursery in a nearby town, I bought a dozen trays of Begonia plants. (Begonia semperflorens) These replaced the pansies (Viola tricolour) and primulas (Primula spp)which beautified my winter patio.

Later I wandered to my small front patio, which is never used, to check on the state of my container plants there. Woe is me! All that remained of my winter plantings were a few bedraggled vygies, (Portuluca spp) wilting in a dusty planter. (See photo below) 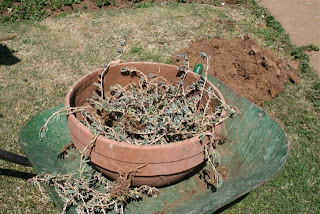 I called John, my one gardener, and he loaded this sorry example of a container garden onto the wheelbarrow and took it to the back of the house to implement some serious renovations. First we pulled out all the existing plants and tipped the soil into a garden bed. John washed the container and after placing a few sturdy rocks over the drainage holes, we added a couple of handfuls of stone chips followed by fresh potting soil. Then we walked around the garden together and collected suitable succulents for the container. 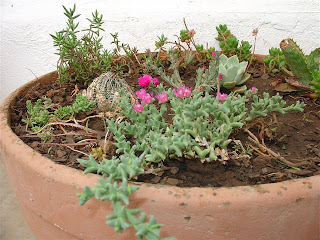 This is the part John really enjoys. I always have a hardcopy picture of what I want to create (this time I copied a container garden featured in a gardening magazine) or I’ll draw a picture using coloured pencil crayons (as a grandmother I always have crayons and felt-tipped pens in my house!) and black marker pens to illustrate my idea. John LOVES this. When we stop at bed with a plant which he sees in the picture, he gets very excited and says: “Hona, Mme?” (This one ma’am?) And I say, “Yes, let’s take that one out.” Often he spots something I would have missed and I tell him this; you can see he enoys being one up on Mme! 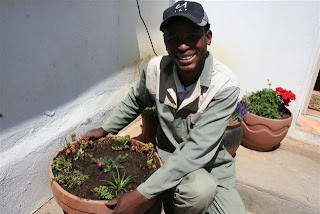 Here John poses proudly with the completed project. Later he added a few more plants; he'd asked the gardener next door for succulants he'd seen on my neighbour's pavement/sidewalk (see close-up photo above this one)
While planting the container up, John referred often to the magazine and reproduced the featured garden almost to the letter! Afterwards he posed for a photograph alongside his creation which has pride of place at the door to the house.
Posted by Jo at 4:30 AM