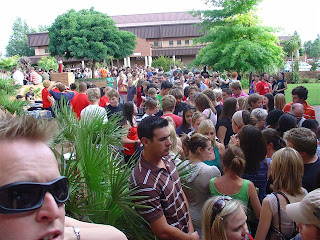 People queued for hours to attend the live concert

Last night I did something I’ve never done before.

I attended a LIVE ROCK CONCERT in the city of Bloemfontein! I went along with my husband, younger son and daughter-in-law. We left home at 1.30 and arrived in the city at 3pm. The doors only opened at 6pm but we had to ensure our place in the queue even though we’d bought tickets on the Internet. (Wonderful invention, the Internet!) We ultimately stood in front of the CRC church auditorium for three and a half feet-burning, gruelling hours. (I always wear high heeled- sandals and last night was no exception) I must admit, there was a moment when I wondered whether the concert would be worth the wait! 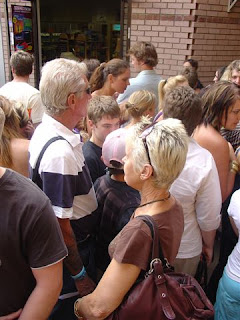 My husband and I were two of the few older people there !

The people started to arrive (all young – teenagers and twenty-something’s) and swell the lines. When the doors eventually opened, we surged forward, had our tickets scanned and our wrists stamped with indelible ink. Inside the foyer of the church we came to a dead stop again. We stood for another 20 minutes when finally the inner doors opened and a mass of humanity swept inside! 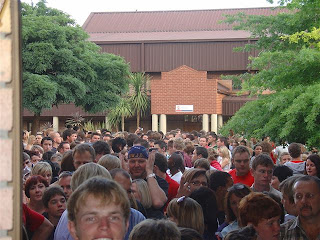 Even though our tickets were marked GA (General Admission) which means you can sit anywhere, we were fortunately spare the indignity of having to dash for prime seating. My daughter-in-law’s sister, a member of the CRC, had reserved seats for us and within minutes we were seated and I could rest my aching feet! 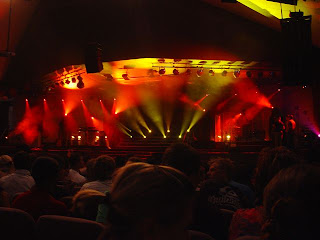 Fifteen minutes later, once everyone had entered the auditorium, the lights dimmed and many different coloured strobe lights lit up the stage. The band probably entered at this point (I was unable to see too well in the dark!) and suddenly they struck up their first song with a blast. We were about to experience the wonderful music ministry of Hillsong United.

When believers unite, God does something powerful.

After attending a Summer Camp revival in 1998, the worship team of the youth ministry began writing songs and in 1999 the album Everyday was released. Since that time the Hillsong United worship team has released an album each year and has grown in popularity. Along with playing in Sydney, the team currently travels the world, touring and holding conferences with thousands of attendees. The Hillsong United band is currently led by Joel Houston, the son of Hillsong Church senior pastor Brian Houston.

What a privilege for us to have such an awesome and spirit-filled international band last night. Not only are they top professional musicians, they are also totally focused on praising and worshiping the Lord. Having had a conservative upbringing, I originally wondered if I’d enjoy this genre of music in this situation. Yet within minutes of the concert beginning, the love and passion the artists had for Jesus, was tangible.

This show was also encouraging for the 7000 youngsters in the auditorium to know this was no ordinary gospel concert. Not one person in the audience stood still. People stood up in the ailes, between the chairs, hands raised, feet dancing and praising God. I stood on my chair (next to my daughter-in-law) thinking I’d be able to take good photos, but somehow my camera was not on a very good setting for the dark conditions.

The current Head Youth Pastors of Hillsong United are Chrishan and Danielle Jayeratnam. Chrishan was onstage last night and he ministered to us. After a very moving message about relationships, he made an altar call inviting people to make a change in their lives and exhorting those Christians who have backslidden, to come back to God. People responded in their hundreds going up to the front of the church to publically accept the Lord as their Saviour.

The band took up the worship again and we continued to glorify God in this wonderful way.

Romans 1:16 “For I am not ashamed of this Good News about Christ. It is the power of God at work, saving everyone who believes...”