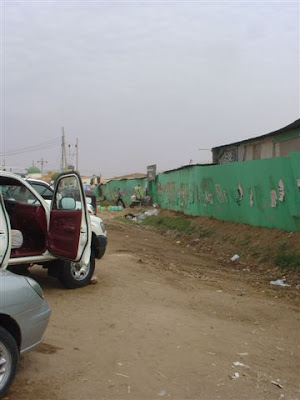 The Souq Arabi is behind these corrugated walls. You can hire a young lad to wash your vehicle while you visit the market. We had ours beautifully washed and polished for SDG5/US$2

Last Friday Grant took me to the Souq Arabi as a birthday treat. He asked his technician, Marcell, who speaks Arabic, to accompany us.
In the Arab world, a souq is a market, which may be held in a designated commercial quarter, or in an open-air location. Souqs are an important part of life in Africa and the Middle East and their merchants carry a wide assortment of products from rugs to vegetables.
Located right in the centre of Khartoum city, this is your classical chaotic market teaming with people. The market is divided in to several sections, each focusing on a certain product. It is huge and spread over several squares in the center of Khartoum proper just south of the Great Mosque (Mesjid al-Kabir) and the minibus station. There is even one block devoted to gold but we didn't get to see it. If you are looking for handicrafts and fresh produce - which we weren't - it is better to visit Souq Omdurman. The latter is situated only two blocks away from our apartment and the largest open-air market in Africa. I never realised it was so close to us, until a kind-hearted neighbour took me there on Monday. More about this in a later post. 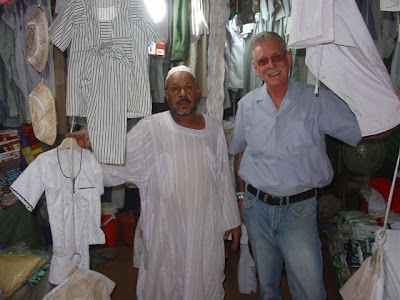 As we walked into the first hall, this gentleman asked me to take a photo of him and my husband in his shop. He sold mens' and boys' traditional Arabic clothing. 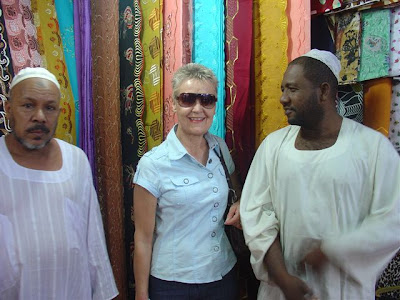 While Marcell and Grant were looking at the goods in this shop, I wandered off to a few stalls down the passage when the owners there asked me to take photos of them. They also wanted me in the pictture so one of the friends took this photo. Meanwhile my husband had lost sight of me and sent the previous owner to look for me! When I rejoined him, he admonished me for going off on my own saying I could get lost. I said no problem, I had my cell phone and would've called him, but he argued that where would I say I was. Good point! I stayed behind him and Marcell from the remainder of our visit. 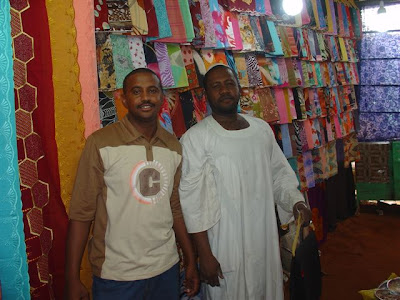 These men sold the most exquisite material for abaya's/traditional robes. They also had beautiful hijab's/headscarves on display 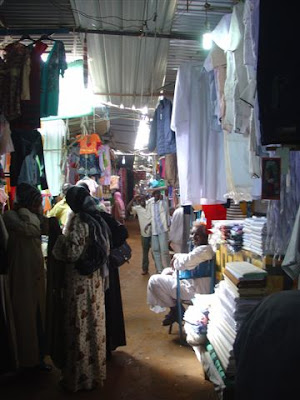 Marcell was looking for a pair of jeans without slogans or embroidery, so while the men were in a shop which sold Western-style clothing, I snapped the above photo. There is such an eclectic mix of textures and colours in the material on display. Hanging on racks at eye-level on the left were ready-made Western-style garments for women. Hanging above me on the right, were traditional jalabiya/Arabic mens' robes 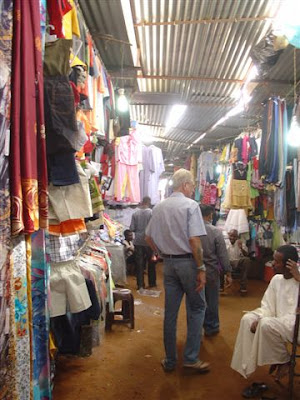 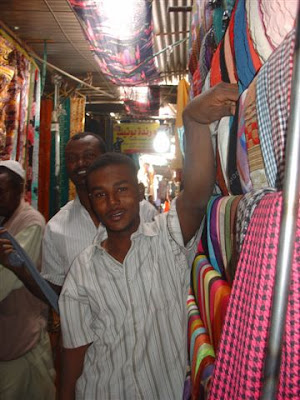 These men had beautiful displays of hijabs and while Marcell and Grant were busy looking for denim jeans without slogans or embroidery, I clicked away... 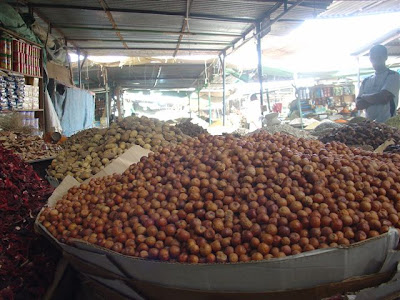 Just outside the primarily textile display hall, we came across the above scene. I just loved the huge bowls of dried fruit and vegetables. 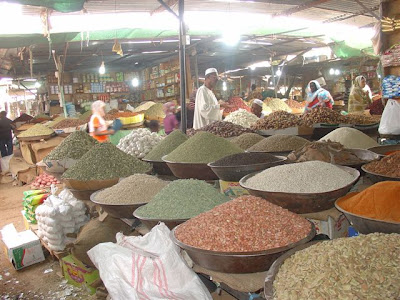 Inside the next covered hall, my olfactory senses were assailed with the most divine fragrance of spices and herbs. Once again, we weren't sure what they were, so my husband, who normally cooks our spicy dishes, wasn't interested in looking. I took photos though... 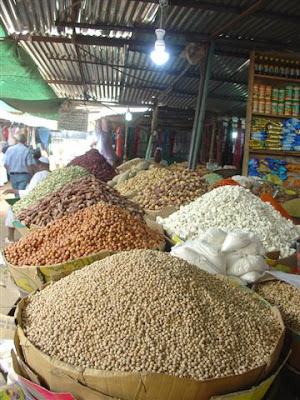 These looked like legumes of some sort: I recognised whole brown and green lentils as well as the fruit of cream-of-tartar 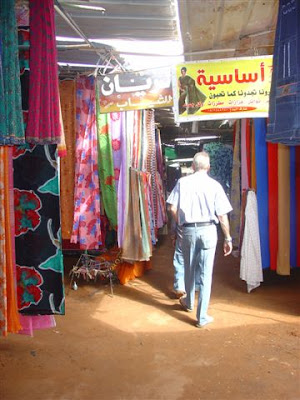 Just around the corner from the dried fruit, vegtables and spices displays, we entered an alley with more beautiful cloth 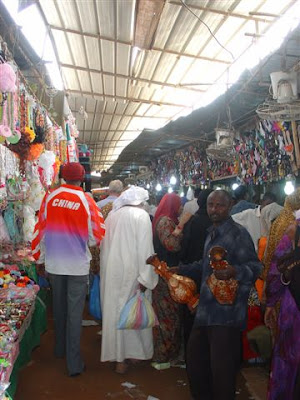 When we entered the section which displayed Chinese merchandise, the place was packed. You can see dozens of shoes hanging from displays on the right. There were hundreds of women in this area (why wasn't I surprised?) Merchants also carry their goods around the market and try to tempt you. It's also normal to see merchants pushing carts displaying their goods 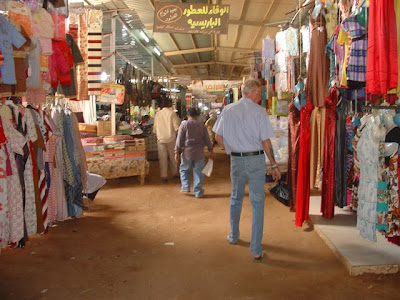 This section had very reasonably priced skirts and blouses with children's clothes on the left. Up ahead are more jeans which is why Marcell is heading off in that direction (He didn't manage to find the jeans he wanted) 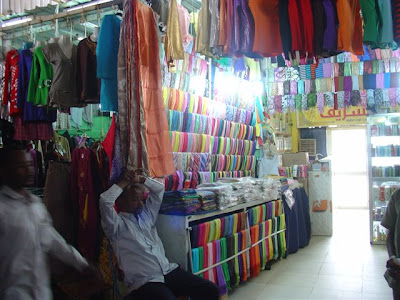 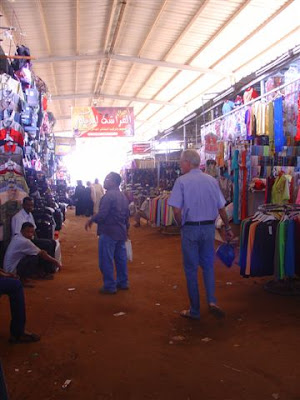 Marcell never gave up looking for his jeans... 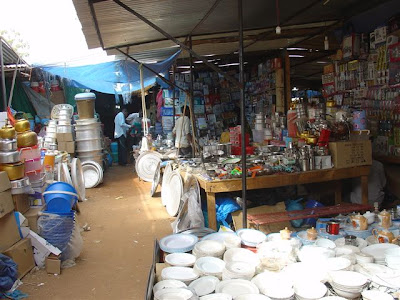 Leaving the previous hall, we found a huge section which sells household goods: kitchenware, cookware, glassware, plastic products. The displays were enormous. In future I will be buying all I need at the souq instead of the upmarket Afra. The items are a quarter of the price of the reegular shops 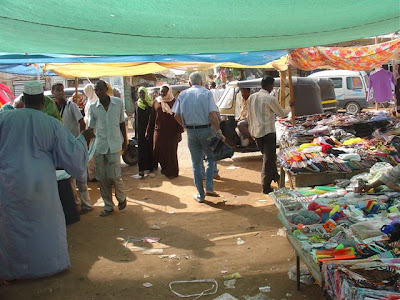 The displays on the left had items like (you guessed it) sewing needles, cotton, straight pins... 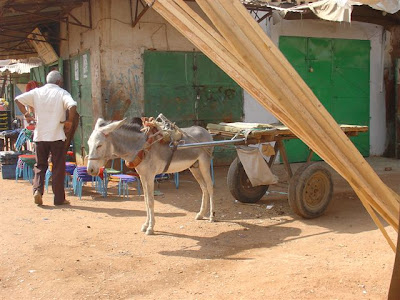 You see hundreds of donkies in Khartoum. I always take photos of these beasts of burden. My husband assures me that the Sudanese are more caring of their donkies than the Maleans and Guineans of West Africa 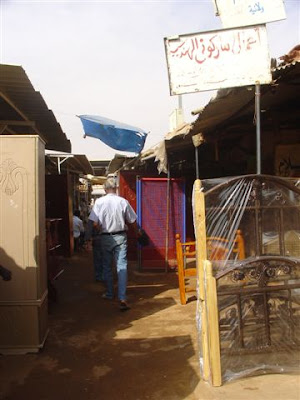 Furniture is manifactured one site and you can place your order. Ornate gates and security doors were on display all along this alleyway 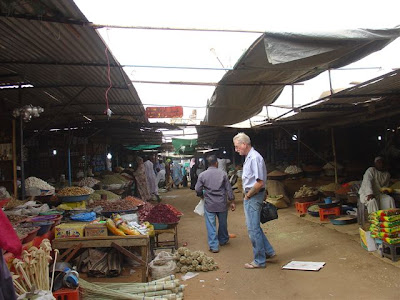 We passed through another dried fruit and vegetable section. My husband actually stopped to look! 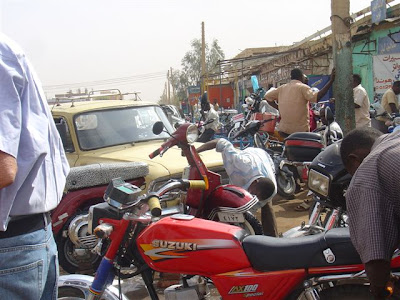 There is a huge motorcycle shop outside 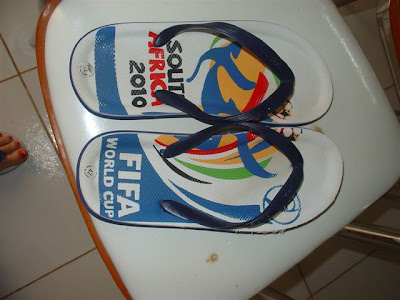 Grant bought himself a pair of flip-flops for SDG7 instead of the normal SDG10 we pay in the regular shops. He was pleased that he found a pair- made in China - promoting the World Cup Soccer to be held in South Africa in June and July this year 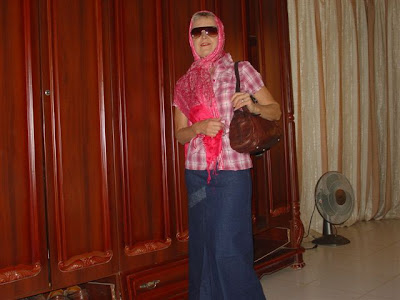 We bought a few hand towels and three new floor rugs as well as a pizza cutter. One of the gifts from Grant was the above outfit. The shop owner quoted me SDG48/US$19.20 for the skirt and blouse. I told him I only had SDG35/US$14 for it so he said SDG36/US$14.40. I paid him with a smile. I bought the pink hijab at another stall for SDG8/US$3.20
I had a wonderful time at the Souq Arabi and intend to visit it often. I'm also a day late with That's My world Tuesday, an interesting meme by Fishing Guy, Klaus, Sandy, Wren and Sylvia, so hope you will still click here.
Posted by Jo at 4:30 AM