Before I post about what I did this weekend, I'd like to encourage you, my dear blogger friends, to visit a blog written from Egypt. Jackleen, an American living in Cairo, has an interesting blog at the best of times. Now, during the uprisings in Egypt, she is giving us the true conditions and happenings, blowing away all exaggerations and rumours. Do pop over there and follow this lovely lady's blog. You can read it here.

Another of my blogger friends, (whom I hope to meet one day, as she LOVES Africa, whoo-hoo!) is Gattina. She hosts a fun meme every Monday called "What did you do this weekend". If you haven't yet joined this meme or not read Gattina's funny and interesting blog posts,  you dont' know what you're missing. Please pop in and visit Gattina's blog, if you have a chance.

My weekend [excitement] began just before midnight on Friday. I woke up and as I padded into the bathroom, I spotted a tiny, dark-coloured worm on the tiled floor. Bending down, I touched it gently, thinking it was a shongololo (centerpede), which curls into a tight ball on contact. Not this "worm". This one immediately went into throes of thrashing about and slithering along the tiles. Mmm, I thought sleepily, just like a snake. I thought about dashing out to fetch my camera but as I was hesitating, it slithered into the bathroom wall and disappeared! Looking closely I saw a teeny hole in the corner of the bath wall. The snake, as indeed I know it was, albeit a baby one, had slithered back into a nest under the bath? Not sure. But it disappeared there and has not made its appearance again. It was about three inches long and as thick as a matchhead. Any snake fundi's out there have an idea of what this snake was. 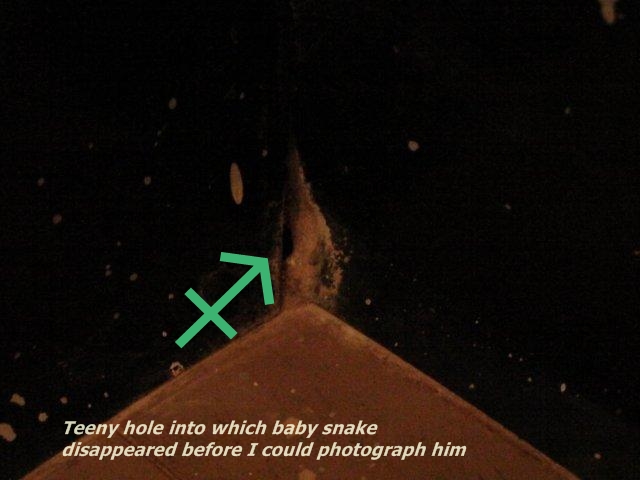 Climbing back into bed, I nudged Grant awake. I told him I'd just seen a snake in the house. "Mmm, what colour?", he asked. When I said "Black", he said, "Oh, where did you see it?" Hereafter ensued a normal midnight discussion as all married people often have (or not, LOL!) about the little snakes in the house which by now had obviously joined his [many] siblings and mama in a nest under the bath. Ewgh.  Not that I'm too worried. If the snake reappears through that hole into the bathroom, he is still too small (he really was the smallest little snake I've ever seen) to be dangerous. If he's already grown in the past two days into a larger snake, he cannot, under any circumstances, fit through that hole. (See above picture - the hole, not too clear in the photo is also only the circumference of a match head)

Saturday dawned bright and clear as every halcyon day has been since we arrived almost two weeks ago. During the morning I popped into the bathroom to wash my hands and as I turned on the tap, a medium sized spider jumped out at me. I must admit, I bellowed, ran out the bathroom and slammed the door. Now, you, my readers need to know something about me. I am NOT afraid of creepy-crawlies and I don't kill them, if I can help it. Least of all spiders. But that doesn't make me less of a woman. I still squeal when one jumps out at me (which hasn't happened to me in decades, in fact since we lived in Zululand in the seventies and eighties in a climate very similar to this one and spiders would jump out at you if you walked down a dark passage) Anyway, back to the Kenyan spider and me standing outside the [closed] bathroom door. I opened the door and peered inside. The spider was gone! No matter where I checked in my small bathroom, the spider had disappeared. Aha, obviously it had skuttled into the hole - probably it had emerged from there anyway.  All our windows in the house have secure mosquito netting on the outside so apart from flying insects which come in through the door, nothing else can creep in through open windows as they can in our house in South Africa. 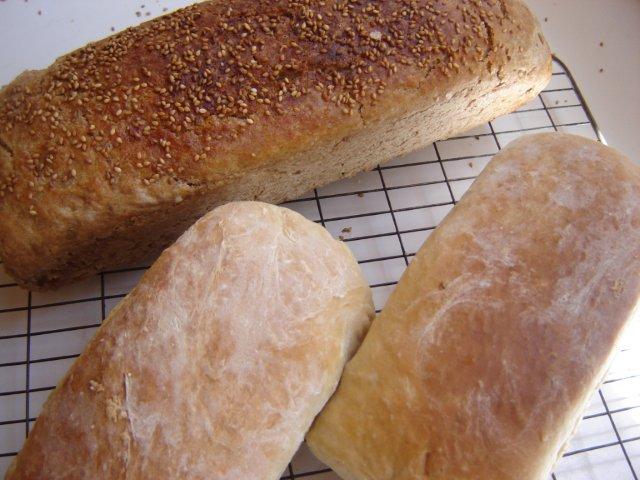 I baked one loaf of brown bread and two small loaves of white in an oven that I had never used before. But they turned out perfectly
OK. the rest of the day passed without excitement. Grant works until mid-afternoon,  so I'm alone on Saturdays. I baked bread in an oven that needed some fancy footwork, err, dial control to regulate to the correct temperature.  In fact, by 6pm, after I'd showered,  the whole camp was so quiet and when the monkeys had not appeared at all on the lawn, I re-opened all the external doors and returned to my desk to continue typing. A few minutes later I heard a muffled crash in the kitchen . I was alone in the house (and we live in safe environment, where no human would intrude) I immediately thought MONKEYS! I jumped up and ran to the kitchen shouting at the top of my voice. Just then three monkeys scampered out the back door, the last one having dropped a packet of sliced bread which he'd stolen from the counter. I hung my head out of the back door, where these three and a dozen others were sitting on the garage roof looking and me and making squeaking sounds, and gave them all a piece of my mind. Imagine, I told them, here I've just done a blog post on them and said that if they stay in their part of the bush, I'll stay in mine. And this is how they repay me? Huh?  Believe me, they didn't even bat a collective eyelid! (lol!)  I banged the kitchen door shut; closed top front door a little more gently  (I sit near the front entrance into the lounge, so I left that open) and came back to my computer.

So with the first half of my weekend, filled with excitement like snakes slithering across the bathroom floor, spiders scuttling into minute holes and monkeys meddling in my breadbin, how can I can complain of having a boring time in Africa?

On Sunday morning Grant took me out to the mine site where we did spot of birdwatching. Wonderful. We saw many birds not seen before AND I managed to get some good photos (I've been depairing of ever getting a clear photo of a bird - that morning I got several!) which I will share later on. 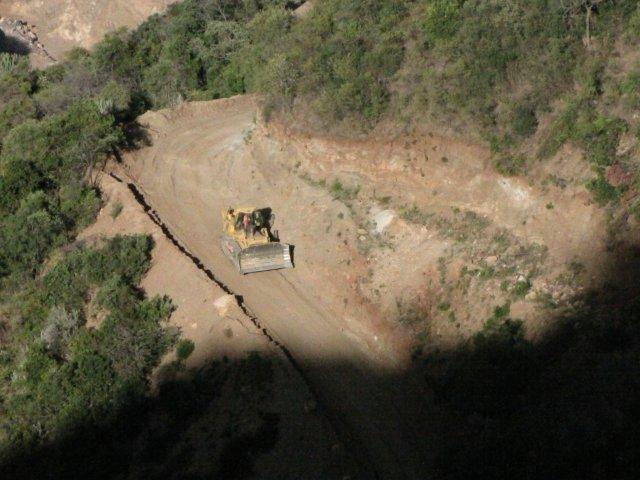 One of the Komatsu bulldozers (now part of Grant's earthmoving fleet) moves down from a top pit to the service area just below this road. I will do a post on the mine shortly.
On returning to the house, I made a batch of cheese scones which we enjoyed with tea for mid-morning breakfast. After this I settled down to work at my computer. I have a magazine deadline for Friday, 11 February and have been frantically going through my archives for old photos. (I'm supplying the photos for the article as well) More about my article in a later post. Mid-afternoon on Sunday, Grant had found a grid and bought charcoal locally so he prepared the normal Sunday BBQ (braai) ! (Our very first braai in East Africa!)

While typing this post on Sunday night, I could hear the deep Hu hu-hu hoo call of the Verreaux's Eagle-owl (Giant Eagle-owl)in our garden. We hear him every night and morning. What bliss.

And Praise God! Our Internet has been running smoothly for the past two days. Only on two occasions in this time did it log out. Amen!

For more of what others have done this weekend, click here.
Posted by Jo at 3:30 AM

Labels: Life in East Africa, What did you do this weekend