Can you remember what you did on the weekend of 26-27 February 2011? Gattina from Writer Cramps hosts the fun meme: What did you do this weekend? Please do pop in and visit her blog, she writes beautifully and describes her life, her travels and other happenings around her in a delightful way.
The company has decided to upgrade the houses, so on Friday morning I popped up to Sue to hand in my list of items which need replacing or repairing in our house.  She asked me to walk with her to the other houses to check what they need. Charda is the only other lady in the camp, so we stopped off at her house to get her list. The single-status men have handed in their lists. 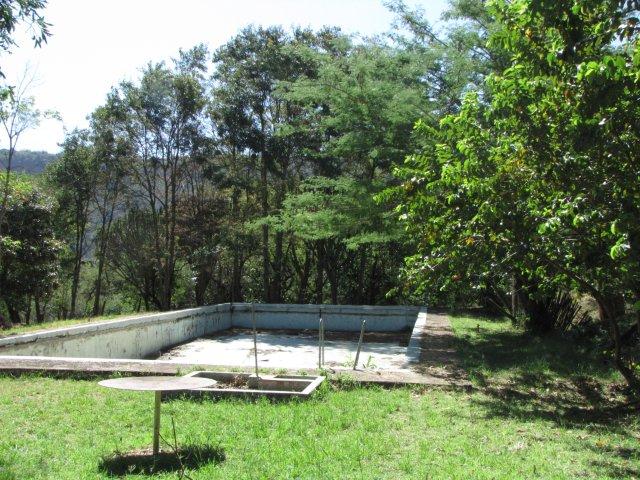 All the while, we stopped (frequently!) to look at one or another of the hundreds (no exageration!) of birds in the gardens and along the lanes through the camp. Sue took me down to the old swimming pool which has been empty since before she and Nico arrived in 2005. While there's something quite sad about a lovely deep structure which has no use anymore, the area around it is lush and natural with huge trees towering overhead. While we stood there, the beautiful Ross' Turaco flew over, a pair of Black-and-white casqued Hornbills perched in a guava trees while bulbuls, weavers, sparrow weavers, starlings and mousebirds twittered in the wild fig tree in a garden above the lane. 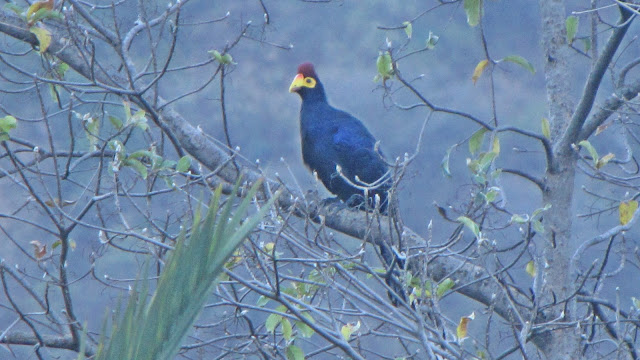 Ross' Turaco, a vibrantly-coloured bird sat quietly (not usual) in my garden while I took this photo 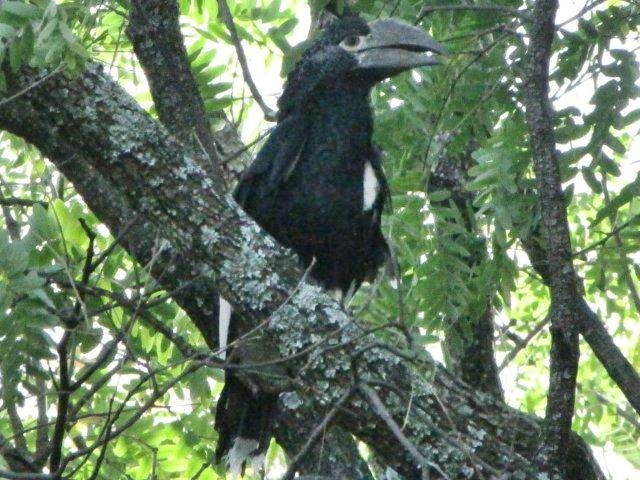 Black-and-white casqued Hornbill male in a tree at the back of my house. The female has a much smaller, almost non-existent casque. At the moment they are plentiful in the camp. Their calls are loud, cawing sounds, much like a crows. As they pass overhead, their wings beat so loudly it sounds like a glider flying over!
Walking back (and talking non-stop as women do!) we spotted a pair of African Paradise Flycatchers in a large tree in a garden below mine, and Meyer's Parrot with several Lesser-striped Swallows enjoying the morning sun on the electric cable above us. I think we spent about eight minutes on the house-lists and almost an hour walking through the camp and enjoying the beautiful surroundings!

As you know, I posted a photo of ole Ginger on my blog yesterday, saying that he was "not well". On Saturday morning, a driver took me, Grant and the financial manager to El Doret for our monthly grocery shopping. Previously Grant had a travel box made in his workshop and we took Ginger along with us. He was going to the vet in El Doret!

To our knowledge, Ginger has never been out of the camp but apart from a few quiet meouws from within the box, he was a very good traveller. When we got to the vet, whose surgery is set in a leafy suburb of the city, Michael carried the box indoors. The doctor and various assistants were waiting to see what would emerge from the cage. Poor Ginger- as I opened the lid, he found he was in a strange place and had five heads peering overhead. As I lifted him out and placed him on the steel table, while stroking him and chatting to him, one of the assistants, on instructions from the vet,  brought "the bag". This is a jacket-type garment made out of sailcloth, opened down the front but  with valcro fastening. In a flash they had Ginger inside this jacket with only his head sticking out. The doctor who had prepared his sedative, pulled a hind leg through one of the two holes at the bottom and injected Ginger. No stress for the pet, no  injuries to the helpers. What a dandy idea.

Ginger was in for surgery: we had him neutered and while he was sedated, arranged for him to have his innoculations.  At the same time the vet checked his teeth (apparently he's quite an old cat), de-ticked and de-flea-d him and applied a spray which I use on all  my pets back home in SA. The vet we dealt with was very professional and friendly, wonderful man.

We collected Ginger at two in the afternoon and bumped all the way back down the jaw-breaking, bone-jarring road; over the mountains  back to camp. Ginger spent the evening on the chair in the lounge and the night on the end of our bed! Yesterday morning he got up, had a huge drink of water, finished all the cookies in his bowl and walked out the door!  (He only came in again this morning) I had visions of him meeting up with the other cats - they can only be real feral cats living in the bush, as I have not heard or seen any other cat than Ginger -  with them all sitting in a circle while he "held court". I can imagine them saying: "You went where? And what did they do to you? Huh?  You were asleep and didn't know what happened? Go waan! WHAT? Impossible! "

The vet says that Ginger will still visit and wander around the camp for the next ten days. Then he'll stay home. We'll see!

Thanks to all who sent kind messages to Ginger yesterday. 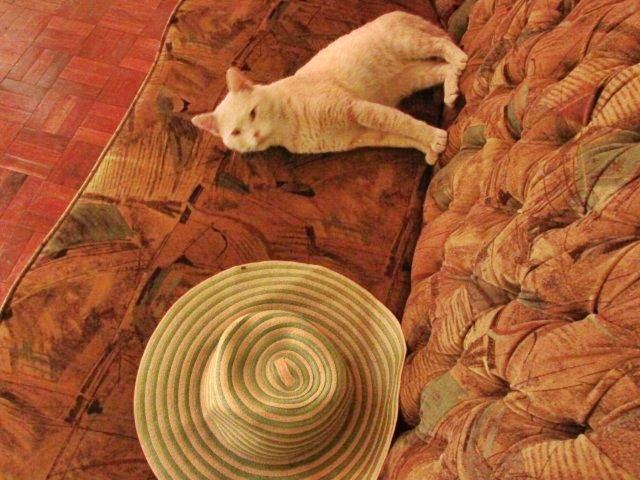 This morning Ginger was doing what cats do best - relaxing!
For more on other people's weekends, click here
Posted by Jo at 10:03 AM

Labels: Birds in Kenya, Life in East Africa, What did you do this weekend