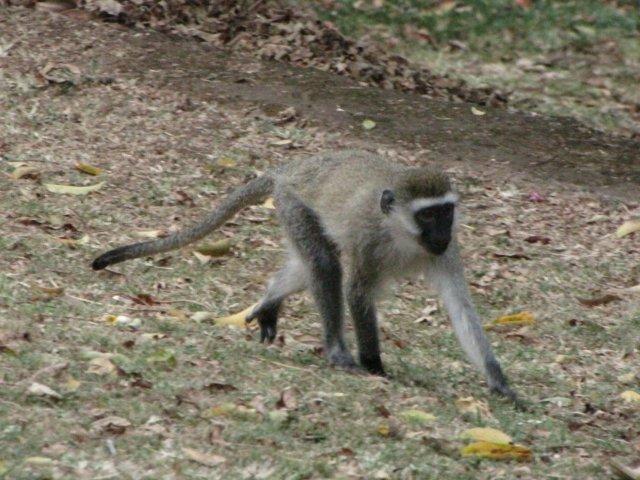 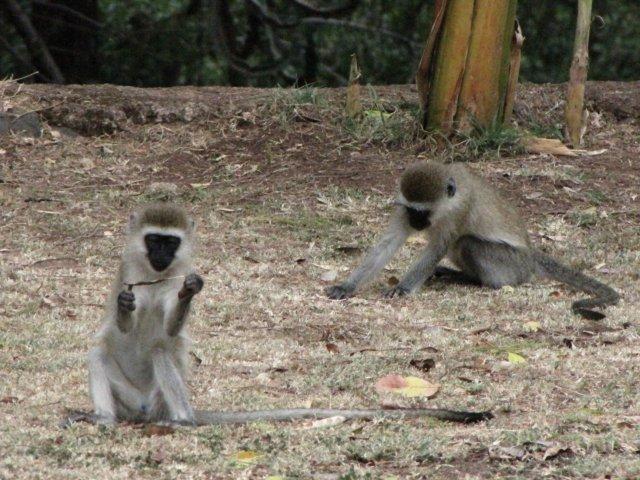 Mmm, what a lovely snack 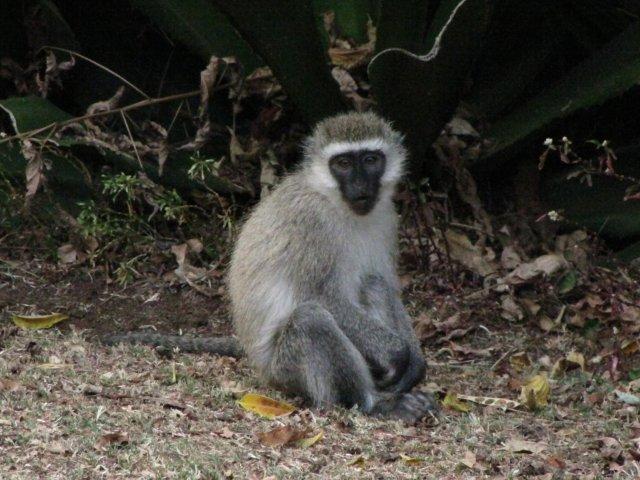 Butter wouldn't melt in my mouth
The Vervet monkey(Chlorocebus pygerythrus) is found in South and East Africa. As usual, man has made this cute little guy a pest by feeding him in his environment. (And no, I don't recommend one as a pet, they have huge teeth when fully grown and are not averse to using them. The threat of rabies is also very real in Africa) 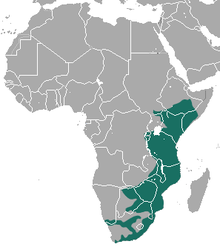 The young appear to have an innate tendency to make these alarm calls, and adult monkeys seem to give positive reinforcement when the young make the right call, by repeating the alarm. Mothers have been reported to punish young giving the wrong call.
The Vervet Monkey eats a wide range of fruits, figs, leaves, seeds and flowers. It also eats birds' eggs and young chicks, and insects (grasshopper and termites). In human inhabited environments it will eat bread and various crops; especially maize.
Source above: http://en.wikipedia.org/wiki/Vervet_Monkey


In most campsites or lodges in the forests and bush, monkeys are a great problem. They are not shy or afraid of humans. If a house or tent is left open, the monkeys will go inside and apart from wrecking whatever they find, will steal what they can. Cell phones, cameras, cosmetics, foodstuffs, whatever. Not to steal in the nasty sense, but because they're inquisitive creatures by nature!
Here on camp they 're all around us. Who can blame them? They are actually in their natural environment while we are the aliens. In the week that I've been here, I've shooed them by making faces and shouting at them. I've waved my arms about and raced across the lawn towards them.  And guess what? They move away into the thickets and within thirty seconds they're all back in the garden again.  I read a unique method of keeping them at bay in a travel magazine. At an upmarket lodge in the Knysna Forests, in the Western Cape, South Africa, the waiters are armed with catties (slingshots) and ice. This is works as a  friendly deterrent without causing any harm to the animal should you strike it in the face/eye by mistake.

Our resident troop (and tonight I'll do a head-count ; I'm sure it will number 38 or more) is only present early in the morning and late afternoon. I don't mind them being around (how can I? LOL!)  and - as long as we remember to close the doors when we're not inside - I think we can all co-habit quite amicably here in the Valley.
For more pet posts  around the world, click here
Posted by Jo at 3:35 AM