As promised earlier (gosh, I seem to be making a lot of promises these days, LOL) I said I'd post about the article which I have to submit to a magazine this week.
To do this, I have to go back quite a number of years; twenty-six years. As a child I was quite puny and a very fussy eater.  My family's lifestyle (when I was growing up) was not at all sporty. In the fifties and sixties, jogging and other exercise was not the in thing (not in our family, anyway). However, at school I played hockey, loved playing  tennis and always competed in the athletics and swimming events. This way I didn't gain weight unduly and maintained my correct weight throughout my teenage years.

As an adult I reached the height of 5'4"/164cm and for years weighed 119lbs/54kgs. Even after childbirth, I'd shed my "baby" weight within a few months.

Doing my own my own housework and looking after my two small sons kept my weight off without too much strain. In the late seventies we moved to a farming community in Zululand where I joined in most activities with my friends. I attended "Keep fit classes"   (aka aerobics)  and played tennis twice a week. I also started jogging which had become popular by then.
In 1984 I had a kidney operation and for months afterwards I was tired and listless.  I took to my bed, doing only the bare minimum of chores and afterwards slept for most of the day. I never went back the tennis club  -even once my convalescence period was over -  and I stopped exercising completely. When my clothes got too tight I replaced them with larger sizes;  so and even though I knew I was gaining weight, I refused to accept it. Gradually I stopped going to friends' birthday teas and wouldn't visit our friends with Grant. Going out at night was torture. I virtually banned myself from attending social  functions. This put a great strain on our relationship and Grant would often just go out by himself. (I mean, what man understands when you feel frumpy and unkempt and that your jeans are too tight? In fact, do men believe us when we say we have nothing to wear?)
At the time my parents were living next door to us. My mum was a top cook; apart from delicious meals to which we were invited regularly, she also baked the most divine cakes and tarts. Her chocolate cake was out of this world. One afternoon while I was visiting them,  Grant popped his head through the door. His workshop was just beyond our fence and he'd often drop in to enjoy my mum's culinary creations.
He said he'd just seen Christine, a friend of mine and hardly recognised her. Christine had been very overweight but according to Grant she had slimmed down incredibly. Listening to this (replying with "you-don't say" and "that's wonderful, Dear"),  I was just lifting a large slice of my mum's chocolate cake to my mouth when he looked directly at me and said: "Christine says she lost all this weight with a new slimming organization called Weigh Less.  Karen (another friend of mine) runs the classes"
Uh-oh. My mum (who'd also gained weight since retirement) and I looked at each other, I dropped the cake and dashed to the telephone. Within minutes we were on our way to Karen's house for a free weight assessment.

Karen, a beautifully slim young  mother of two  measured me, assessed my build as small-to-medium and told me to step on the scale. I will never forget the horror of seeing my weight that evening. I clocked in at more than 176lb/80kg! (60 lbs/26kgs over my normal weight, phew!)

My mum had to lose 26lbs/12kg so we both joined Weigh Less that day. We were given a menu plan which was very strict in the eighties; it consisted of lots of vegetables and fruit, light meat (mainly chicken and fish) steamed or grilled and with no extra sauces or cream added to the food. We had to drink at least eight glasses of water a day, eat only what was on the plan and weigh in with Karen on a weekly basis. Within a few months my mum reached her goal weight. My journey lasted quite a bit longer but because I was paying to lose weight and accountable for my own actions, with wonderful support from Karen, my mum and other members in the class, I eventually made it. Nine months later in October 1985,  I stepped onto the scale: I'd reached my goal weight!

Below is a poster of my "before" photos in the mid-eighties and subsequent goal weight photos in 1988 to 2005. 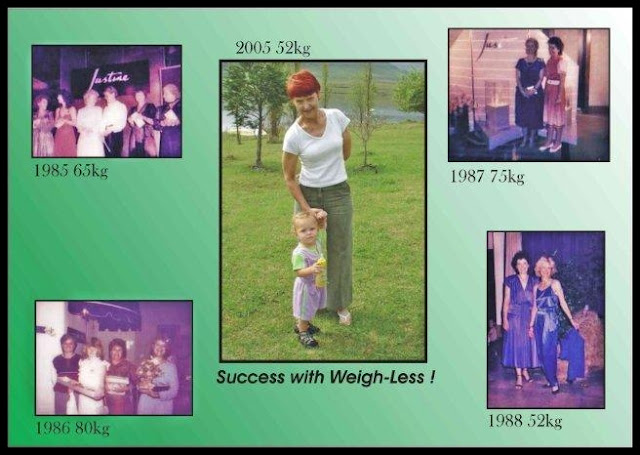 The photo: "1985" (top left corner) was taken in January 1985, about seven months after my kidney operation. I'm the blonde under the letter "J" and already weighed 133lbs/65kg at that stage.

Below that, in "1986" I tipped the scales at 176 lbs/80kg.  I'm the lady in blue clutching a bouquet of flowers. In the 1987 photo (top righthand corner) I'd already lost 8lbs/5kg; here I am in dark blue posing with my elegant sister at a function in Durban.

By August 1988 I had been on goal weight for almost a year and maintained it easily with Weigh Less. In the bottom righthand corner, I'm wearing a blue catsuit (who can remember these from the eighties?)  and posing with my sister at a charity concert where we modelled a new clothing line for the local boutique (our 15 minutes of fame, ha!) I'd

In 1999 I rejoined Weigh Less and lost a few mid-life kilograms. I subsequently became a Group Leader which meant I ran classes to help others to lose weight and maintain a healthy lifestyle.  In the centre photo (2005) I'm posing with our first grandchild, Eryn who was 18 months old.
In 2003 I joined Grant in Guinea, West Africa where I secured a position on the gold mine he was contracted to. The managing director's wife, Amanda, was desperate to lose weight so I helped her by monitoring her weight every week. We discussed menu plans, shared recipes and tips on healthy cooking. She and I also started to run on the airstrip after work every evening. (Well, we walked and talked more than we ran, but the general idea was there!) The company airstrip, a good length to jog (or mostly walk and talk as Amanda and I  did!)
Initially Amanda and I were the only women on the mine but gradually more women joined their husbands in the camp. Apart from my position as maintenance secretary, the company appointed me as Social secretary. I kept tabs on all expat  birthdays and anniversaries, and arranged cake and socials in the pub to celebrate the occassion. 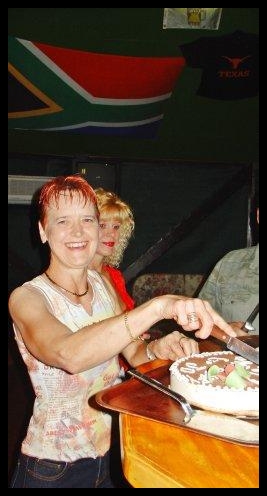 As the Social Secretary, I arranged with the chef to bake cakes for birthdays and anniversaries and organised a celebration in the pub. I'd also cut and distribute the cake. The one above was the SIXTH in that particular month!


I was also tasked with giving motivational talks to the women on camp.  The talks, which I held on Saturday mornings on my veranda overlooking the African bush, eventually became the most sought-after social gathering on camp! As a man's wife joined him on site, he'd say: "You'll be able to attend Jo's Ladies' club on Saturday!"
I encouraged my fellow campmates to lose weight the healthy way, (wellness is far more important than being "thin"), regain a positive self-image and maintain a healthy lifestyle. I printed recipes and tips on healthy cooking which we discussed in the group. As there was no shopping mall, chemist or clothing store on camp, we also exchanged magazines and borrowed each others' beauty products. The groups of women which alternated frequently as happens in an expat community, comprised of Lebanese, French, Dutch, American, Australian, English, Nigerian, Ghanaian, Guinean and South African women. 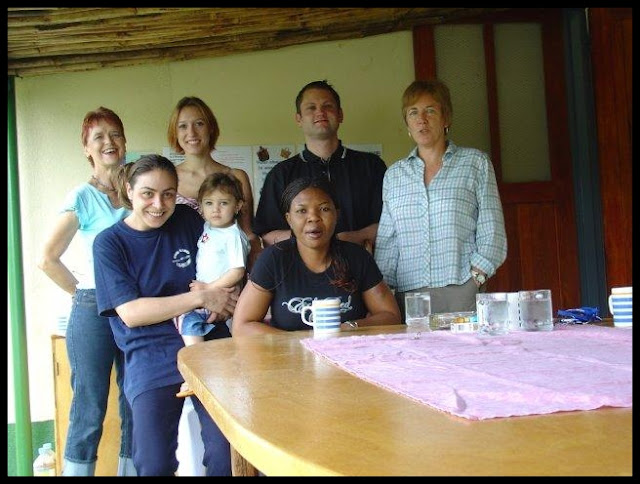 One of the groups I ran on camp in West Africa between 2004 and 2006. Back row: from left, a South African, (Jo) a French girl, (Bernice) German gentleman, Marcus (the only guy in our group, and the envy of all the other men!)Morag, my British friend. Front row: Waffa  (holding her baby) from Lebanon and seated  a Nigerian lady, Femi who was visiting her accountant husband for a month
As with all good things, this time also came to an end. In July 2006 the gold mine project was completed; I accepted a package and went back to South Africa. I spent the next three years living alone while Grant worked in Guinea, later Mali, West Africa, a stint in Zambia culminating in his job Khartoum, North Africa.
Many readers have been with me since the time I joined Grant in the Sudan mid-2009. Here I faced a new set of challenges: the weather in the Sudan is exceptionally hot which is not at all conducive to exercising. I was also alone all day in a first storey flat. However, to keep motivated I did cardio exercises on the four flights of indoor steps in our apartment. I also used a torch to jog several laps on the roof of our building before sunrise. One reason for this was to avoid the heat of the day and the other was so that the neighbours didn't see me in running shorts and tee-shirt. (Taboo in a Muslim country) 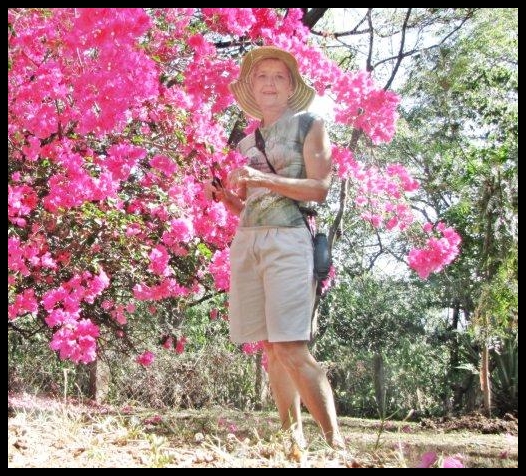 Ce'st moi, Kenya, February 2011
After a three-month break in South Africa, Grant accepted a position on a Fluorspar mine in Kenya, East Africa.  I was able to accompany him, praise God!  Although we've been here for two weeks, I've not started any exercise regime yet.  I've been in front of the computer more than normal - what bliss just to be able to write and enjoy the view from my desk - but I'll work out some sort of activity which I'll hopefully keep up! Perhaps I'l just walk briskly around the camp and see if I can spot and photograph any more interesting birds.(LOL!) Meanwhile, I do intend to maintain a healthy lifestyle for the next twenty six years.
Above post is the gist of the article I have to submit by this Friday (tomorrow)  It will appear in the April/May 2011 issue of Weigh Less magazine.
Posted by Jo at 3:30 AM