I've been very remiss in posting about Parkrun over the past two months. Early in June I was shocked by the electric gate on the property and two days later when in the second kilometer of Parkrun, my hip suddenly gave in. I was horrified; I thought I'd suddenly developed osteoarthritis or that I was going lame. All sorts of dramatic thoughts went through my mind. I couldn't speed up my walk and ended that day on 47 minutes and some change.

When we got home and I opened the gate (this time taking care not to get shocked) Grant worked out that I'd been earthed through the hip, hence the injury.

The next week, no matter what effort I put into my walk, I ended the 5km on 47 minutes plus again!

The next week,  I was standing at the front of the group of runners and heard Grant greeting our dear friend, Anthony. I looked back and waved at him. The next minute he was at my side and asked me what I was going to do that day. I said I want to get back to finishing in 45 minutes. He said he did as well. As the coordinator counted down: three, two, one and I set off,  I heard Ant say: Go Jo! I started running and as usual by the time I'd covered about 600m, I had to slow down to a fast walk.

I passed the first kilometer mark and was making good time when I heard a man calling out a greeting behind me. He was talking to Ant (I never look around but realized Ant had almost caught up with me) Ant told this guy that he was trying to catch that lady in pink ahead. (moi!) By the 3km marker, I was in my stride and for the first time in weeks, enjoying my Parkrun experience. Then I heard the two sticks just behind me. I started to greet Ant but he said: "no time for talking Jo, let's GO!" He picked up his sticks, tucked them under his right and told me to run with him. We continued for about 500m when we passed a trio of people walking side-by-side. As I made my way between and past them, they asked what my rush was.  I said I had an old man chasing me! We had a good laugh and then Ant and I ran another half a kilometer. I had to slow down by now and Ant strode along beside me.

On the last kilometer stretch, Ant didn't say anything but picked up his sticks again, set off at a cracking pace and got to the finish before me. As I clocked in, I asked  Pieter my time:

Ant had done it in 44 minutes and 3 seconds.

We both had achieved new personal bests.

While in Marquard, Grant saw our doctor's assistant, Tracy who gave him an antibiotic injection for the recurrence of a spider bite infection from about two months ago. At the same time I asked Tracy what she suggested for the spasm in my right hip. She said it would have to be relaxed and had just the right injection for that. She injected me and gave me a course of pain tablets and the pain is GONE! Hooray!

I was looking forward to my next Parkrun to see if I could do even better now that my hip was out of its spasm. Alas and dang. There I slipped and fell off a crate while checking out stuff in our storage and bruised my foot. I've volunteered at Parkrun for the last two weeks, which has been good for me. I'm the photographer and also have gotten to know the other volunteers. 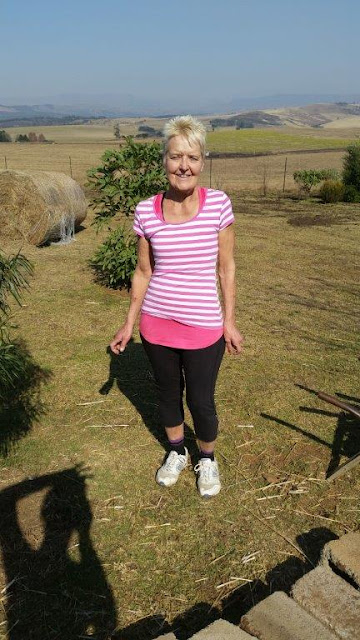 Yours truly taken after my last Parkrun two weeks ago.
I've been off since then due to a foot injury (photo credit: Eryn Hedges)