My weekend, my world

I'm awfully late posting for today, but here it is. On Friday night, Christmas Eve Grant and I were invited to Angus' in-laws who live down the road from us. We have known Celia and Lourie since forever (more than fifteen years) and really got to know them when we joined their church, Marquard Christian Ministries, in 2007. Then our younger son, Angus fell in love with their younger daughter, Angus and suddenly we were related, Ha! In our culture, our children's in-laws are referred to as our brother- or sister-in-law.
Now my sister-in-law, Celia has just had her kitchen refurbished. She and Amanda asked if I'd like to come and see it when it was completed about a month ago. To which I said, no, I will see it at Christmas, because they'd invited me and Grant to have Christmas day luncheon with them and their family. But here I was seeing it on Christmas Eve and what  beautiful kitchen she had created from three tiny, quite poky rooms. Where I stood and took the photo below, used to be Celia's office. At the end of the row of tables, where Ilze, Amanda's sister, Hester (with her back to the camera) who is Lourie's sister, therefore, Celia's sister-in-law  and Celia were preparing a salad, used to be a small, closed in kitchen and behind them at the end of the long room used to be the scullery. Isn't it beautiful now? All open plan with clean white lines. 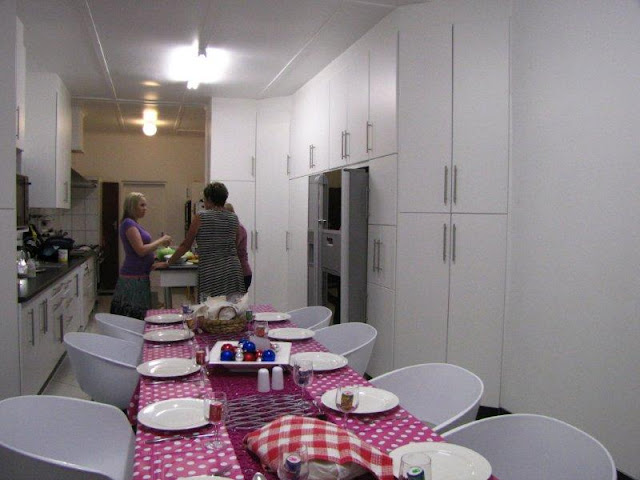 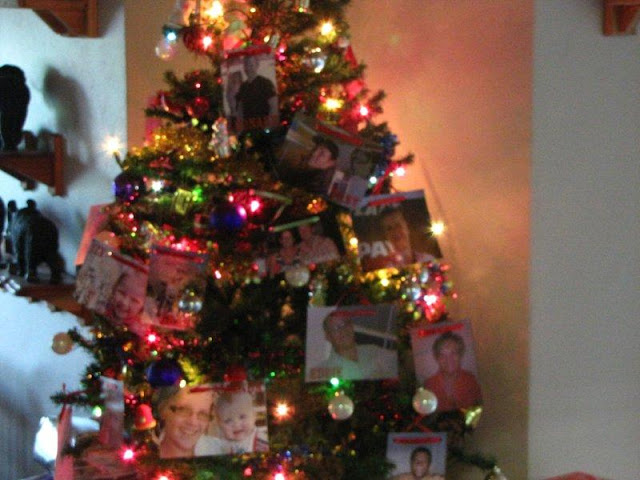 After dinner, we all gathered in Celia's sitting room around the Christmas tree. Ilze, Amanda's sister had photos of all present attached to the tree. While the children were receiving their  gifts, each adult had to fetch his photo from the tree and tell the company about a highlight in 2010. He/she also had to say what he expected from 2011 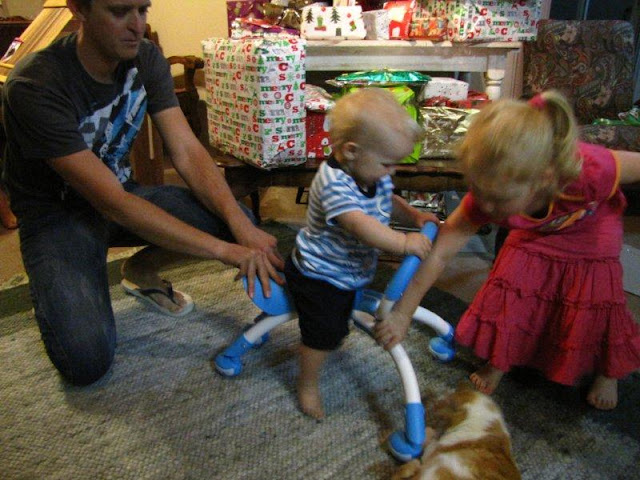 Amongst other presents, our Marquard grandson, Joel received this "bike" from his maternal

grandparents. It is a new concept in South Africa and called a "Ybike" It apparently will teach him balance and co-ordination as he moved about on the wheels. Being the grandson of biker parents and grandparents, he took to this toy immediately. Above his dad guides him while his four-year-old cousin (in a very womanlike manner!) shows him how to turn the bike. Fortunately they drove past the cat who was also part of the Christmas Eve family get together
After the gift-opening and coffee and cake (phew!) we all adjourned back to Celia's lovely kitchen where the tables were arranged to accommodate people around them facing each other. We were about to play a game called Kadotjie. (Pronounced Cu-doy-key) I subsequently heard that this word is Dutch and means "small gift/gizmo or doodad". Celia and Amanda bought a pile of inexpensive gifts and wrapped them. These are placed in the middle of the table. A dice is thrown by the participants and if you throw a "six", you may take a gift. Of course, you don't know what you are taking. Many people threw many sixes and their gift pile was high. Others only entered the game in the final throes of the first round. When the pile in the centre was depleted, you had to open your gifts. Many were cute, many were strange gifts! Then round two starts and  the first person to throw a six may take anyone else's gift. By now you may have begun to like certain of the gifts you drew from the centre pile, but this only encouraged others to take this from you. Of course, great fun and laughteer ensued with every throw of the dice! Norman, married to Hester (who is Lourie's sister and Celia's sister-in-law, LOL!), collected many gifts in the first round, not least a box of Sally Williams Nougat (candy) which he kept saying, "I hope no-one wants my nougat!" Bad move!  Almost everyone zoned in on  his Sally Williams Nougat! 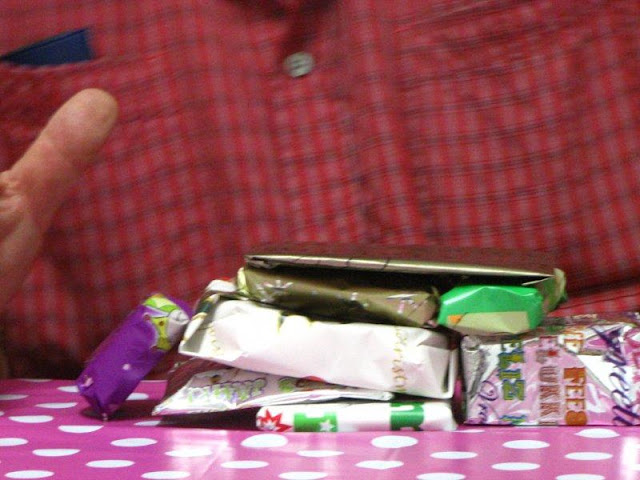 Norman with his stash of presents! 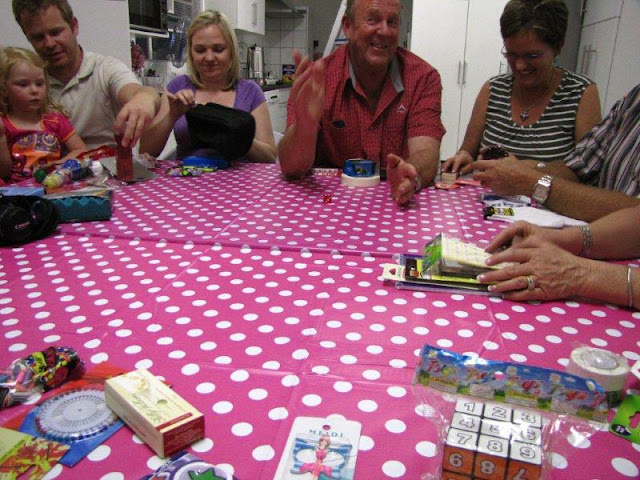 The gifts are small and often funny/perculiar. As soon as you open your pile of gifts, you display them for all to see. The dice is thrown again and the person who throws a "six" may now look around and take any gift which catches his fancy. This leads to great hilariousness as by now each person has taken a liking to a doodad he owns and hopes against hope that no-one else decides to claim it. In the photo above, amongst a set of pins, a fairy scissors and a rubics cube, was a box of Sally Williams nougat. This brand of nougat (candy) is of great quality and absolutely delicious. Norman originally won the nougat and at the first opportunity, Grant claimed it from him. I subsequently claimed it from Grant (no sharing in our relationship, HA!) and minutes later, Celia threw a six and claimed it from me! 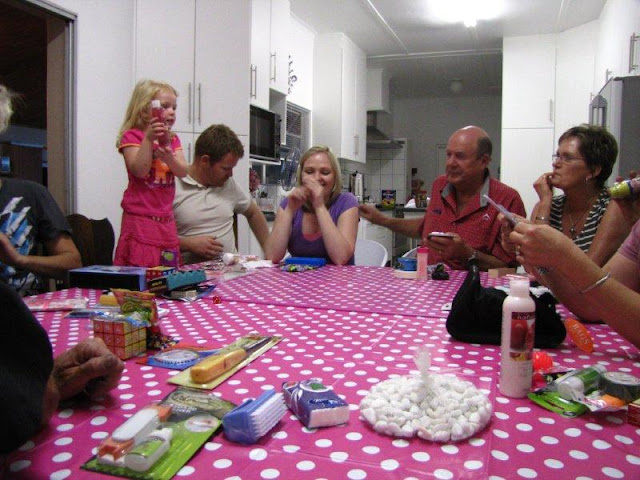 By the same token, Celia had a gas stove lighter in her pile of presents - see in photo above - and when I threw a six, I took it from her. Minutes later when Angus threw a six, he leaned over and claimed it from me! When Grant threw a six, I said, "take Gus's lighter!" And he did!  As I said, this game caused much laughter and fun. 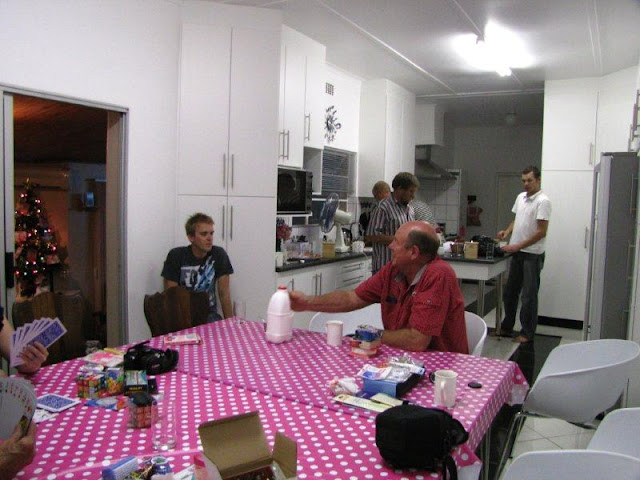 Some people were chatting, some were arranging hot drinks; others were taking photos (ahem!)  and yet others were playing card games which ultra-big playing cards!
We eventually left for home at some late hour (Grant and I are early - to - bed people!) promising to meet up again for Christmas lunch. More about Christmas Day in tomorrow's post.
For more worlds out there, click here
Posted by Jo at 12:59 PM