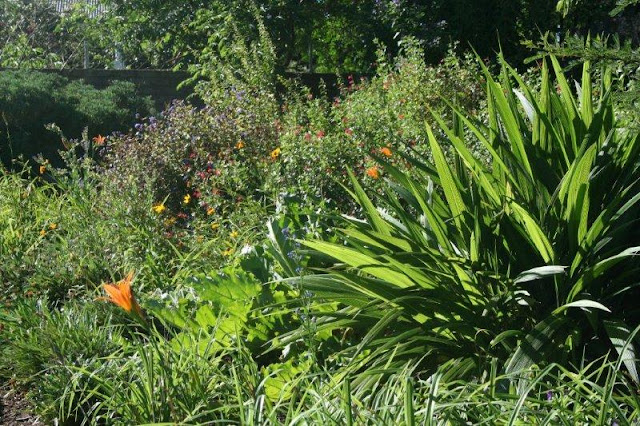 I think that regular readers of this blog know how much I love gardening. Since I've been back from the Sudan, I've spent every available hour in the garden with John and David, my trusty gardeners. Over the past week, I've posted many photos of my garden and had many wonderful comments from you.
When we bought this house in July 2000, there was an empty plot attached to it. No sooner had the sale of the house gone through, when Grant arranged for me to join him where he worked on a goldmine in Guinea. I stayed with him for most of 2001 and then returned to South Africa as my mum was very ill and I wanted to be near her. She passed away in the summer of 2002 and that autumn I began to clear the plot next door. I had another gardener, Jantjie, and together we dug up the hundreds of weeds and dry grass that made up the bulk of the plot.
To motivate us, we first cleared a central area which we raised with soil dug from another part of the garden. After turning the soil and adding lots of compost, which I had already started in my house garden,  we planted a variety of aloes, succulents and Barbeton daisies. Later I added a Cape Honeysuckle, bulbines and two Cabbage trees. One of the trees died, but the other is thriving beautifully today.
Then we continued to clear the areas around this bed, until we reached the perimeters. This took another year. By this time the aloes, bulbines and other plants were flowering and attracting a myriad of birds, bees and other insects. This really made us very enthusiastic (Jantjie, like my present gardeners, became most interested in the wildlife and would call me if something new visited) and I began to look in the nurseries for indigenous shrubs and trees to plant.
When people came to visit and wandered through my garden which was a WIP at the time, they'd all ask what I was going to do with the hole I'd dug to fill and raise the central bed (and later two other beds along the boundaries) I'd always tell them I was going to build a pond. I don't think they believed me!
At the end of 2003 Jantjie wanted to go to the bright city lights. I was blessed when Simon (whom I've posted about in my gardening posts) came to work for me. Early in 2004 I secured a job at the gold mine where Grant worked and joined him. I stayed for almost three years, returning in July 2006.
As soon as spring had sprung, I began to garden in earnest. Simon had gone to work for Debbie, who lived down the road and I had one gardener called John. Within two weeks I realised I'd need another gardener and went to the corner where the unemployed men sit daily waiting to be set on. I found a man called David and the rest is history.
One day in the summer of 2007, my garden was beginning to take shape and look really beautiful.  I remember standing against the house wall to cool down and I thought about how passionate I was about my little piece of paradise. Then  I heard a voice which said: "Jo, would you be willing to give this all up for Me ?" Knowing it was God who had put this question into my head, and having committed my life to Him completely, I didn't even hesitate. I said: "Of course,  Lord."
Ha! Famous last words.
I still gardened to my heart's content for a number of years - four, in fact. As a family, we also enjoyed the garden immensely over this period. I always celebrated my birthdays with my friends in the garden. Our oldest granddaughter had her fifth birthday party here with many little guests. John even organized touch rugby which was played on the lawn. Amanda had her birthday party in January 2009 in the garden with the theme "High Tea". Too beautiful. She also organized a surprise Stork Party (Baby Shower) for Debbie in March 2009. More than thirty ladies and many children attend this event. Later that year, when our older grandson turned three (the most exciting birthday for a toddler; who can remember their kids saying : "I'm free!" and holding up three pudgy fingers?) he had his birthday party in Gran's garden.

In between, we've had Christmas luncheons, birthday dinners and lunches, picnics on the lawn and of course, countless BBQ's (the South African braai) all under the trees in sight and sound of the three ponds.

Two months ago when Grant and I returned from the Sudan, we took stock of our house and the expenses surrounding it. We came to the conclusion that the garden was costing us about 30% of those expenses in taxes, water and gardeners.

A few days later I approached our neighbour on the far side of the large garden to ask if he was interested in buying my plot. We've known Prashant for more than a decade and had him as a neighbour for the past five. Prashant, a single guy who runs a family business on the outskirts of Marquard, loves animals. His home is a refuge for a multitude of dogs which he has rescued from near death. For instance, he has a dog called "Tied to a tree" because he found her nearly starved to death and tied to a tree! He has four cats in his house. And in the large area behind their business premises he has two more dogs and two recue horses.

He was interested in my plot as he needed more space for the seven dogs in his yard. There was a six-foot wall between our properties so he'd never seen my garden. As he walked in he said he couldn't believe there was such a beautiful garden behind the wall. He kept saying it was like a park! He and Grant did the negotiations and by 29th November the contract was signed and sealed.  Prashant was the new owner of my garden.

Within three days Prashant had a pallisade fence erected which has wooden slats in each gap. This is so that our dogs don't fight through the fence. Isn't he a wonderful neighbour? He has also installed a low-voltage electric fence along the top of the pallisade so that my cats are never tempted to jumped up and into his yard. They would not stand a chance against seven dogs if they did. The vibration the electical current apparently deters the cat. I find that real neat.

He broke down the wall between our properties on the far side and has created three pathways leading from his driveways into the large garden.
Dear sweet Prashant is keeping the garden as indigenous and waterwise as had it. The garden around his house and swimming pool is very formal and he loves the idea of having a country garden next door. I have sent him photos of the birds and insects in the garden and he is thrilled he's learning about wildlife at this stage of his life!

Oh, and another thing: because of the increased workload on his side, he took over David, my second gardener, who knows the garden and especially the maintenance of the ponds and electric pumps.  David is thrilled to be part of Prashant's staff and is enjoying his job. We speak through the fence on a regular basis.

Over the past three weeks I have thought of my "old" garden as Buckingham Palace. There have been hordes of people coming to see what Prashant has bought. Everyone of them had no idea there was such a garden behind the wall. Had I known this I would have called it "The Secret Garden"!

We can still hear the waterfalls cascading while lying in bed. The frogs still serenade us and we're still able to see the birds flitting around Prashant's garden through the bedroom window or when we BBQ outside. Our own garden has always had a multitude of birds and nests so we lack nothing!

Below I have a few photos just to lead you up from the garden when it was a neglected plot to the present when Prashant bought it from me. 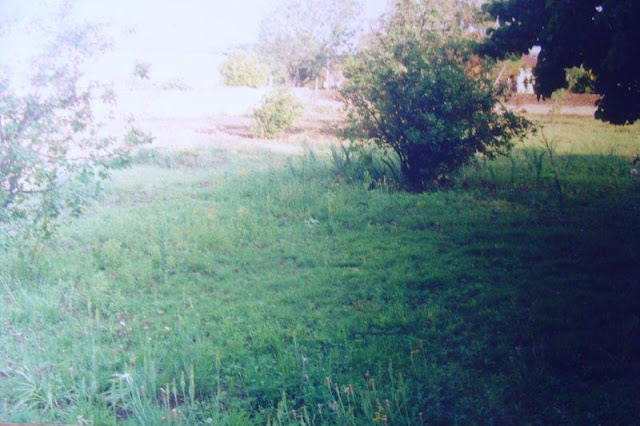 This is what my garden looked like in Autumn 2002 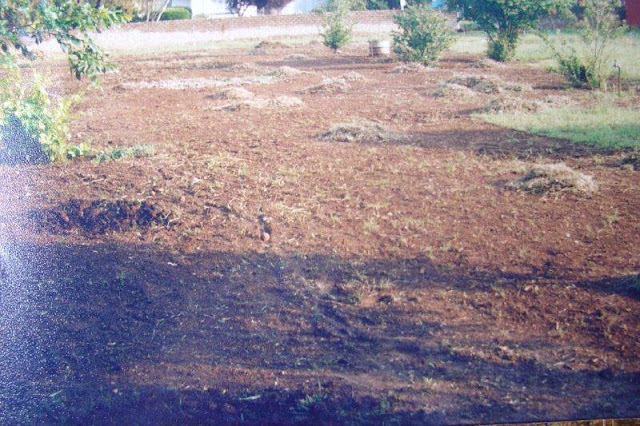 My gardener (I had another man, Jantjie,  those years) and I cleaned each area by hand. It was impossible to get machinery in here because of the walls surrounding the garden so we had to knuckle down and just do it! 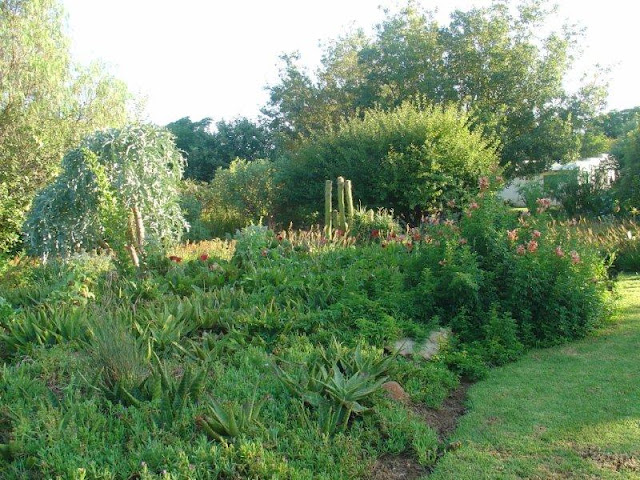 This central bed in my garden was where I first began. I raised the bed and planted it up with aloes, succulants (called vygies in South Africa) Barbeton daisies (Gerbera spp)  and bulbines. Later I planted two Cabbage trees (Cussonia paniculata) on either side of the bed but only one survived (see upper left of photo - the presistoric looking tree with silver-grey leaves) I also  added  Cape Honeysuckle (Tecomaria capensis) which you can see flowering abundantly to the right of the photo (salmon pink blooms) 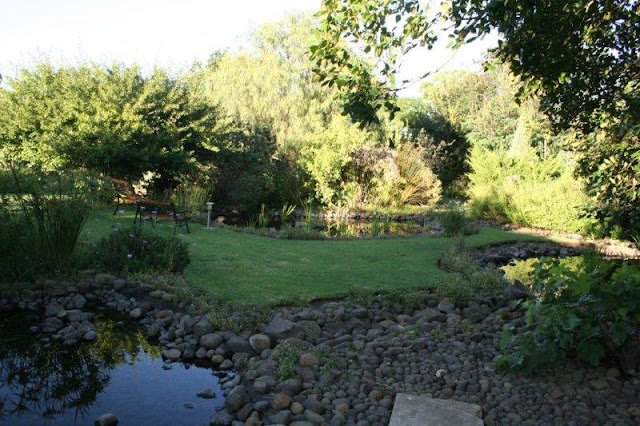 In order to raise the flower bed in the photo above this one, I dug soil from an area nearby. When people asked what I was going to do with the wide hole in my garden, I told them I would build a pond. I don't think they believed me! 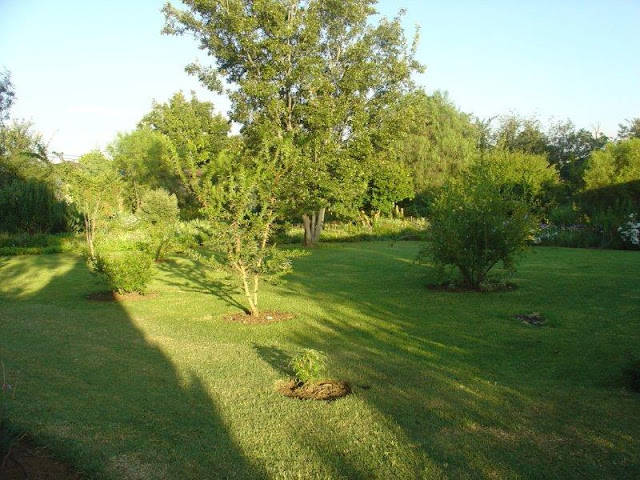 Early morning shadows play gently across the lawn and shrubs 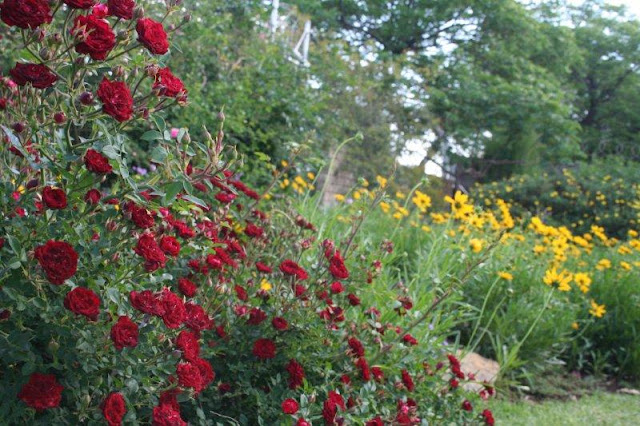 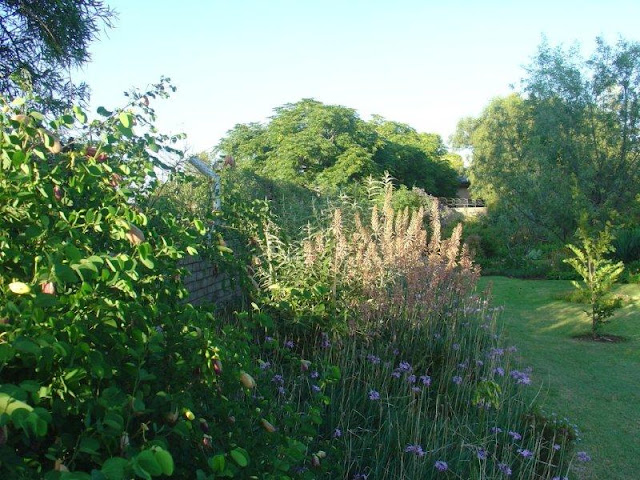 Pride of de Kaap (Bauhenia galpinni), - to the left;  Wild Garlic (Tulbaghia violacea) on the right and Aloe spp form flowering profusely in the sunlight 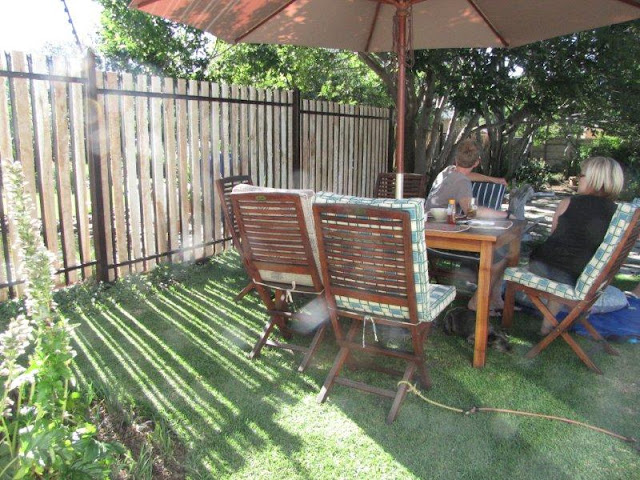 Much ribbing  going on between Angus, Amanda (seated on our side) and Clifford (just visible through the fence) who fitted the did the fencing. We were, of coure, having the ubiquitous weekend BBQ right next to the new fence 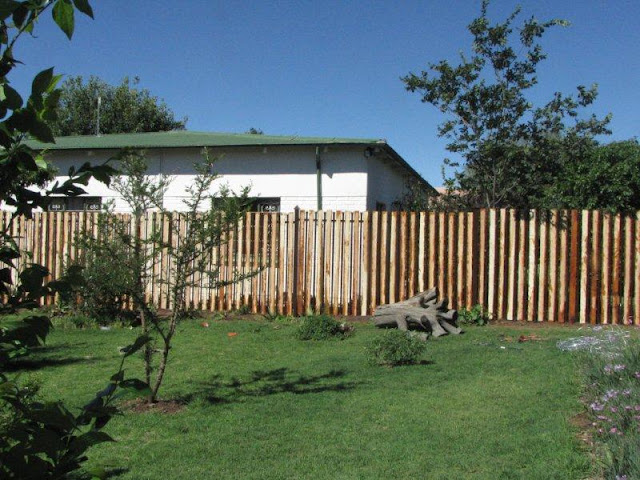 The untreated fence as seen from the large garden which now belongs to my wonderful neighbour, Prashant 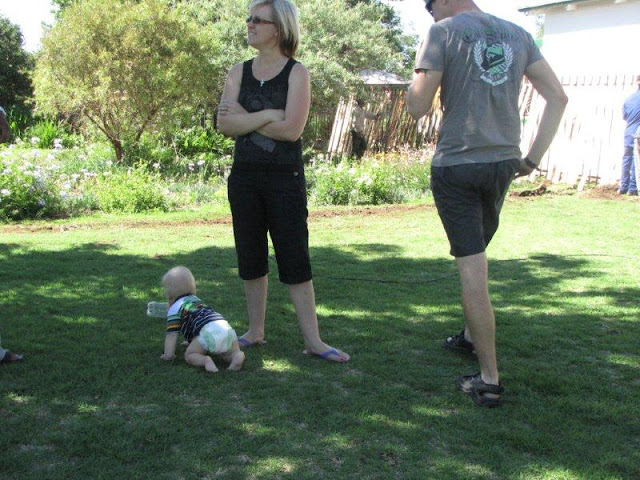 Amanda, Angus and Marquard grandson in the garden which is no longer in the family! 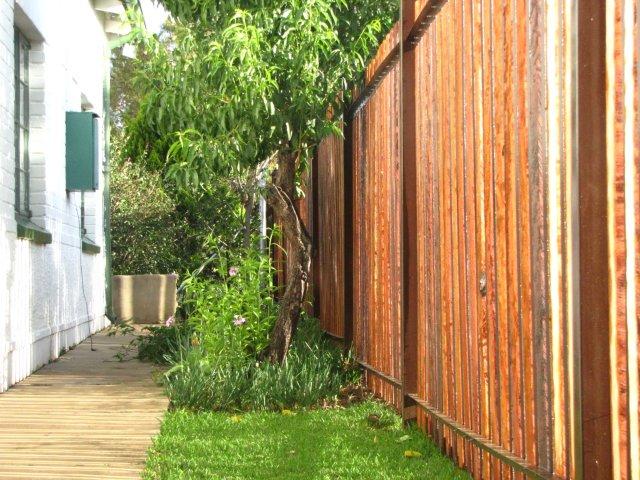 The treated fence viewed from our garden 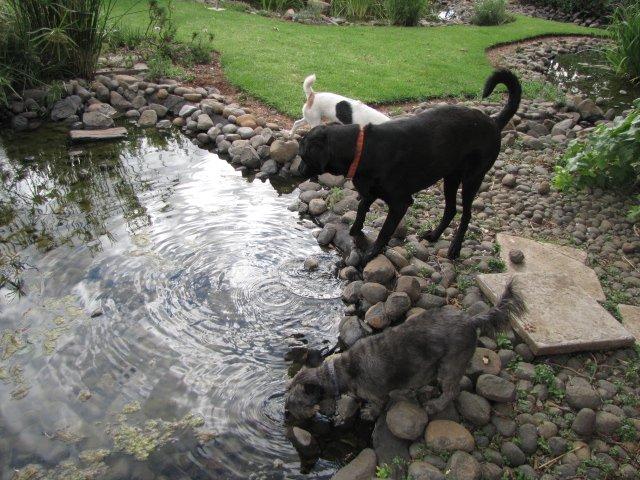 For many days while Prashant's workers erected the fence between the properties, the dogs still wandered in and out of his garden 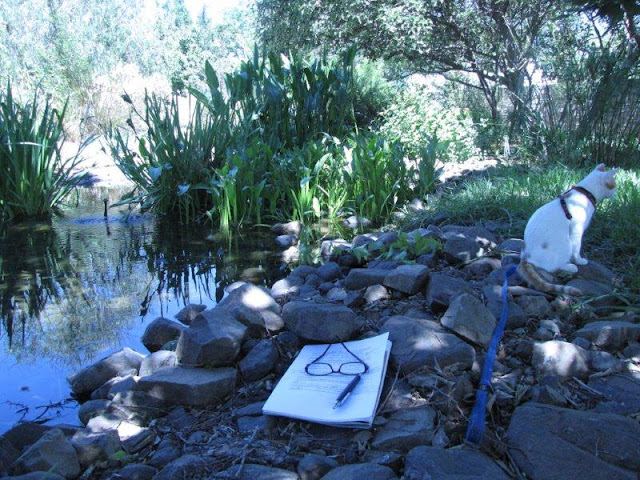 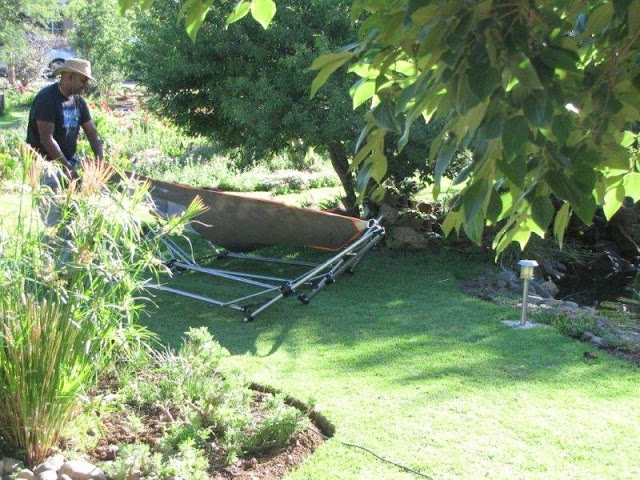 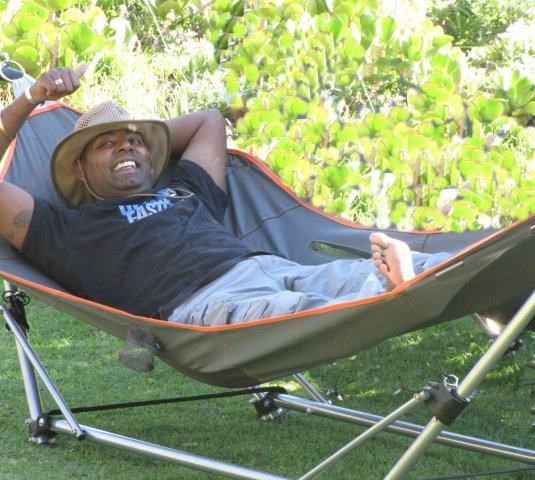 The new owner and wonderful neighbour, Prashant relaxes in his garden
For more of other people's worlds, click here
Posted by Jo at 3:30 AM