Hello everyone! Thanks for the kind comments on Ambrose' post yesterday. I am much better and determined to stay off that bed from now on! It has been a frustrating 15 days of feeling really weak and helpless. I was on another course of meds which were quite strong and made me feel wobbly, hence the lots of lying around. However,  in between I managed to paint a pottery tray while lying on my side and resting my head on my left hand!  It depicts the three cats; Ambrose and Ginger posing in blue-framed windows (very Provencal, I think LOL!) and Shadow prowling around below next to the wooden fence.  Great fun and quite therapeutic in the face of my illness!

Meanwhile, every morning Grant took me out for an hour's birding. That was also most relaxing and rewarding!

Two weeks ago we came across a little bird sitting on a v-shaped thick twig which jutted out towards the road. I screamed at Grant to stop!  I thought it was a tinkerbird which we'd last seen in 2012. Just below this branch was an erect branch and when I zoomed in on it, I spotted a nest hole!

Meanwhile the bird flew away (they're apt to do this!) so that evening we went down the same road after birding in the bush. Grant crawled the vehicle to the spot and stopped. A bird flew away and roosted in the bushes behind this tree. Just then a head appeared in the nest hole. 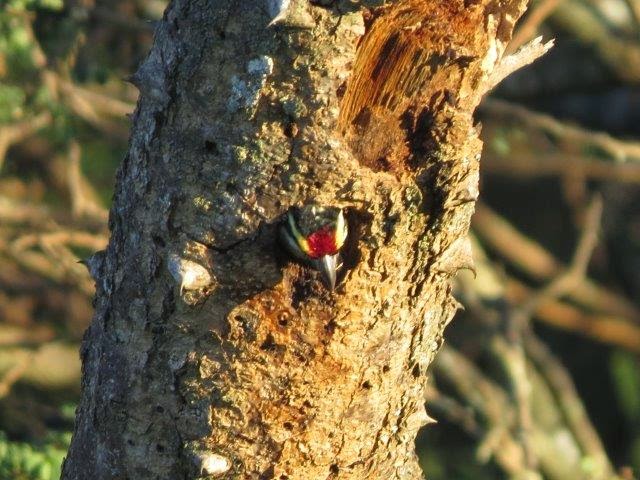 A head appeared from the nest hole!

To make sure I got good shots to send to Jez for identification, I took many photos! When I'd finished, we saw that a security truck was parked behind us and no less than three Tanzanians with bicycles were standing waiting for the mzungus to finish taking photos of the birds in the tree over the road! 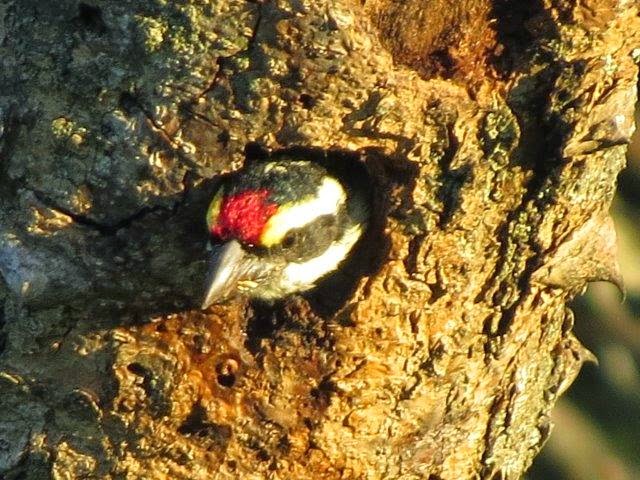 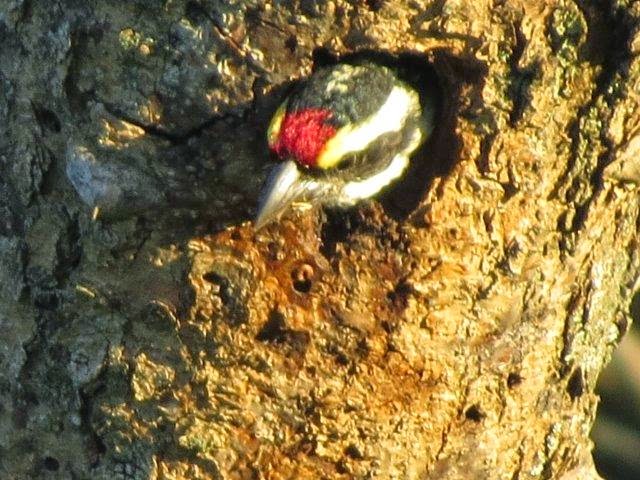 Jez and the rest of the Dar Es Salaam bird club were very excited that we'd seen a Red-fronted Barbet. It's not rare or vulnerable but they're normally not easy to spot. Also you need to know where to look for the nest hole (which looks far clearer and larger in the photo than it actually is) and then stake out patiently nearby and wait for the action!

The Red-fronted Barbet is endemic to North East Africa which is where we live. It's much larger than the Red-fronted Tinkerbird which I thought it was at first. While we watched the mate arrived and flitted around in the bush behind. It issued the warning call which sounds like a nasal nwhee - nwhee and the bird in the hole replied with 4-6 soft, low hoots of pooop-pooop-pooop-pooop.

Exciting  stuff, and as I said,  most therapeutic!

I wish you all a wonderful Passover . I trust you had a great weekend with friends and family.