New business on the block!

Last week I mentioned that Rina and I had started a business; a small, cottage industry business. Some of my blog readers asked whether this meant Grant and I would not be going away again; not at all! We're just waiting, applying for expatriate positions and believing that someone out there will home in on Grant and offer him a contract.

Meanwhile, I've wanted to help Rina to get going with a business of selling home baked goods;  especially when Grant and I are in another country again. I'd also hit upon the idea of selling to the "younger"  residents of the retirement center where MIL Pam lives. There are many retired seventy-something  couples living in free-standing cottages; I know almost every one of them as I'd been the church organist for two different churches for seventeen-odd years - the Methodist church here in Marquard and the Anglican church in nearby Clocolan.

Recently Grant and I visited these retirees and renewed acquaintances. Most were retired farmers and the wives told me they did minimal cooking and baking these days. Gone were their spacious farmhouse kitchens, several staff and unlimited supply of electricity. I realized here was a niche for our business. Marquard doesn't have a coffee shop or a home industries and who can say no to home baking offered in attractive packaging?

Rina and I decided to "test the waters" by making several dozen koeksisters. Please click on the link and check out how endemic the koeksister is to South Africa. Making koeksisters is labor-intensive and you need a minimum of two people to make them.

Rina measures out the ingredients into a bowl; I rub the butter into the dry goods; she adds beaten eggs and water while I knead it all into a pliable dough. We wrap it up well and refrigerate overnight. Meanwhile we boil up a sugar and water syrup with pieces of bruised ginger on the stove. When cool, we place the whole pot/saucepan overnight in the deep-freeze. 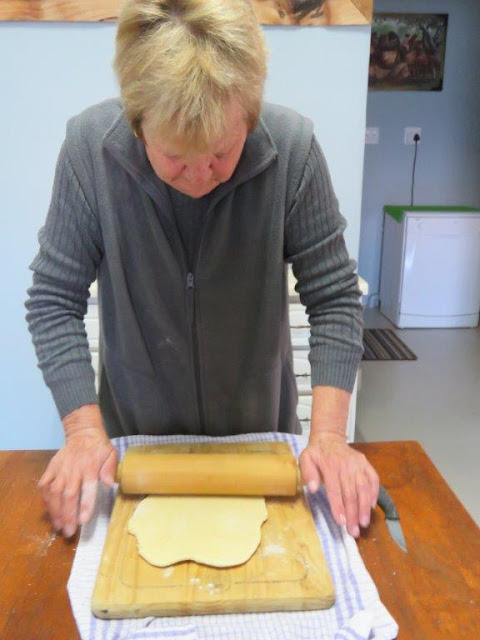 When ready, we roll the dough out... 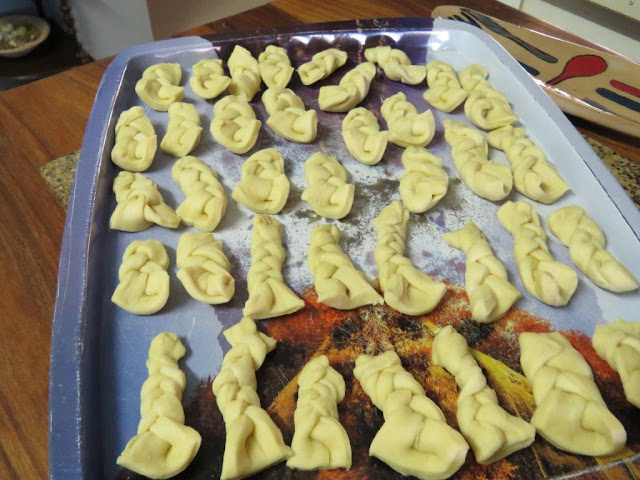 ...then cut into strips of three which we plait

We prepare the whole batch of dough and lay the plaits on trays,  ready for cooking. Standing side-by-side at the stove, Rina heats the oil and deep-fries the plaited dough. I've by then decanted half the ice-sold syrup into another saucepan, returned the remainder to the freezer. 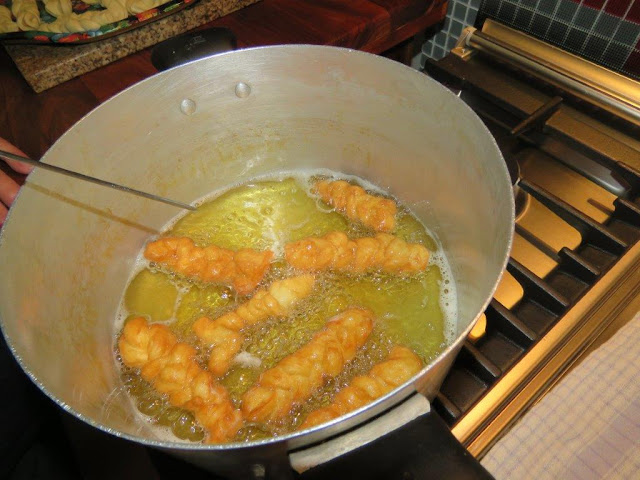 As the koeksisters are browned and cooked, Rina lifts out of the oil each one and quickly
flips it into my pot of syrup 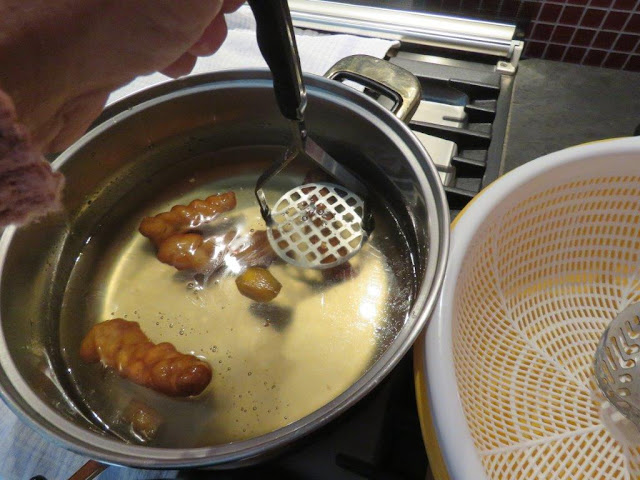 I have to be quick and press each koeksister down with a ricer into the syrup. This causes the plait to absorb the syrup - after which I lift each one with a slotted spoon and ... 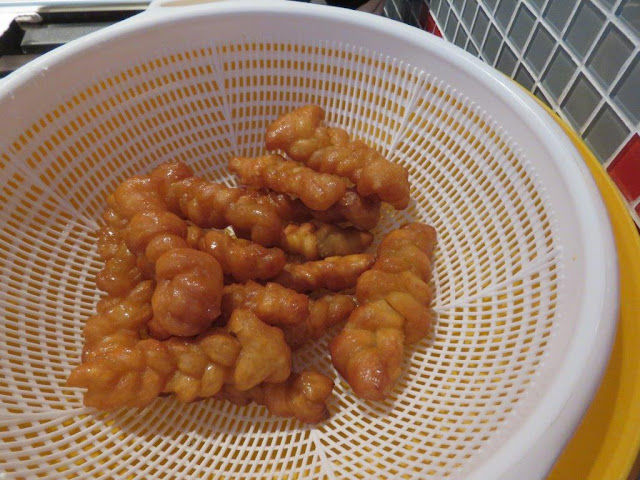 ...place it into a colander over a dish (this is to allow the excess syrup to drain off ) 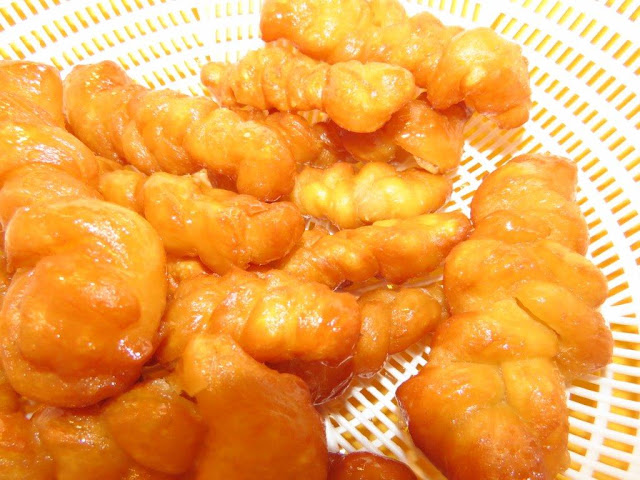 A tantalizing close-up of the crisp syrup drenched sweet 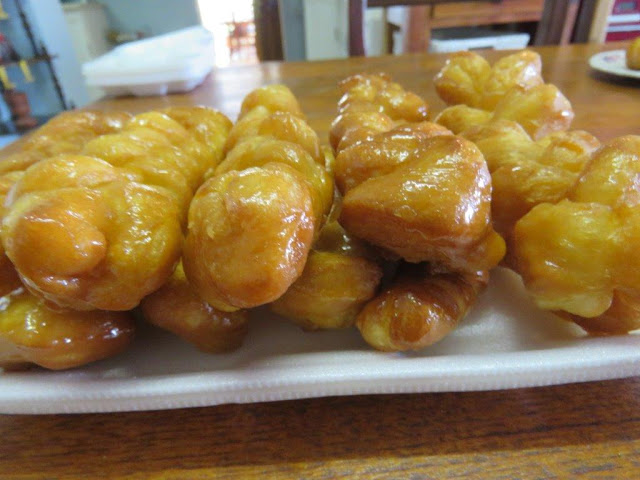 The koeksisters layered in dozens in punnets, ready to be wrapped... 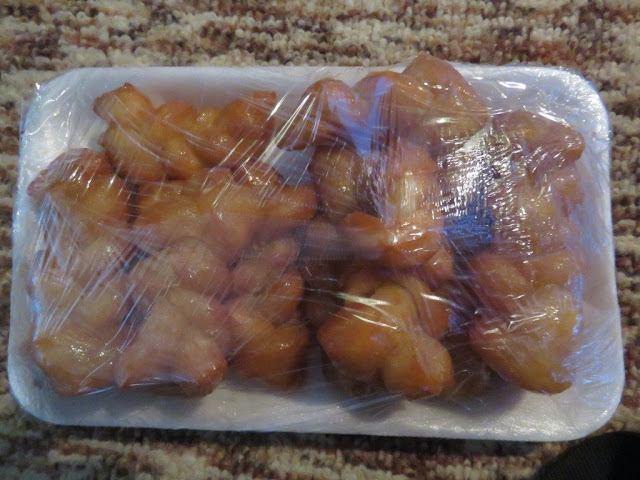 We had made eight-and-half dozen koeksisters for our first foray at selling.

The first day that we ventured into the center,  Rina sat in the car with Skabenga the pup asleep on her lap. I left the koeksisters, which we'd placed in a basket, on the back seat.

I knocked on the first door; the man of the house came to the door and I said:

"Hello Basil, we're selling koeksisters; would you like to buy some?"
He said, no, he didn't think so... they were too sweet; his dentures were giving him gyp and in any case,  he's on his way to town.

I quickly asked if Olivia was home; Basil turned around in their small house and called her. She appeared and was thrilled to see me. He said I had koeksisters for sale to which she clapped her hands ecstatically and asked how many dozen she could buy!

Olivia came out to the car and after greeting Rina effusively and patting the pup, she chose two dozen koeksisters. She said we should go over to her neighbors, Jill and John and get them to buy the rest!

We knocked on their door which was almost immediately opened. John invited us in as Jill came into the lounge. She said how nice it was to see me, but before I could reply, Olivia - squealed that she just had to buy koeksisters from us. Jill said: "Oh yum, koeksisters! How many do you have for me?" (Can you see a pattern emerging here!)

She, John and Olivia came out to the car, greeted Rina and oohed and aahed over the pup. Then Jill peered into the basket on the back seat and asked if she could buy four dozen koeksisters.

By now Rina had taken Skabenga onto the lawn to stretch his little legs and we all stood around chatting. I came to the conclusion that although our older friends were happy to buy a sweet treat, the real bonus was having company from "outside" which is where Rina, I and Grant live.

We finally said goodbye. Our next stop was at friend, Anna,   who'd moved here two years ago with her husband when they retired from their family farm in the Karoo. Anna is my friend, Carin's mum and as she was widowed soon after moving here, it was a good thing that she lives in the center. Needless to say, Anna -  after welcoming us profusely and inviting us into her neat cottage - took two dozen koeksisters!

That left the last small punnet of six koeksisters. Rina and I decided to visit Pienkie in the MGO (three doors up from MIL Pam's unit), offer her the last half-dozen for sale and also show her our new pup. Pienkie used to take time to pat Angie, Eddy and Megan at our gate whenever she arrived back home (next door) from town. She was very upset when she heard of Angie's sudden death in November and I knew she'd be pleased that we brought Skabenga to meet her.

She was thrilled, made a big fuss of Skabenga and she took the last pack of koeksisters!

The exercise was so successful that Rina and I returned home, made up another batch of dough. We still had half the syrup from the previous baking. On Thursday we made them. On Friday morning we stopped off at the beauty salon; I wanted to make a manicure and pedicure appointment for this week. We had Skabenga with us and of course, the two young ladies who own the spa, hair and nail salon, gooh-goohed all over him. I asked them if they would like koeksisters. They both said they'd take two dozen each. My friend Phyllis was having her hair done ad she called that she'd like four dozen as well! Rina collected the basket from the car and when we left the salon, we had one dozen koeksisters left!

That night we quadrupled our dough and made up another pot of syrup.

I woke up at 4 on Saturday morning and couldn't get back to sleep. I got up, took puppy outside, fed him and he went back to bed. I started to roll, cut out and plait the koeksisters. On Saturday afternoon Rina and I made this batch which yielded 16 dozen koeksisters. We've frozen the punnets (koeksisters freeze well) and will sell them in town on Wednesday. This time we visit the businesses: banks, post office and municipal offices.

Meanwhile today we're in the city. We're looking for a special tool which cuts the koeksisters in exactly the same length and breadth every time!

On Friday night we'd had enough of the kitchen and Grant suggested we visit the local pizza parlor as a treat! 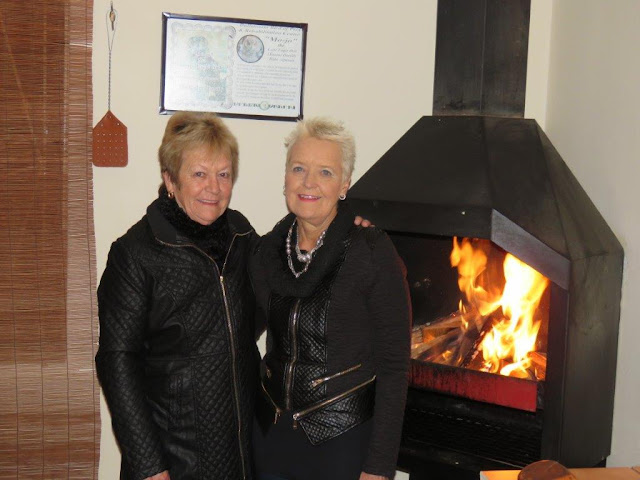 Can you imagine the cold we're experiencing? Evenings are -5 C !