40 Years of Service and a Five-Year-Old Poem 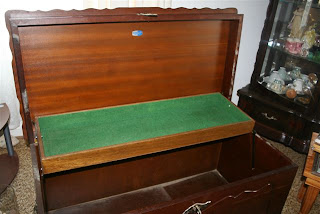 My linen kist made of embuia, traditional kist wood, is intricately carved and beautifully finished with brass fittings 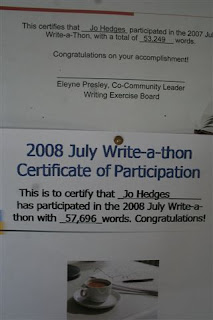 My prized Write-a-Thons certificates
When the Boers (Afrikaans-speaking farmers) left the South African Cape coast and travelled into the interior during the nineteenth century, they used oxwagens to move their entire households. These also housed personal effects, provisions and weaponry for the journey. You can read about the “Great Trek” (the Great Journey) here. The wagons also served as their homes for the whole time they were on the road. Many a baby was born in an oxwagon. Many a person was laid to rest in unrelenting, harsh African soil after dying in an oxwagon having contracted a deadly disease, such as Black Water Fever.
One of the most important items of furniture for the lady of the [oxwagon] house, was the linen chest. It is known here as a kist, the word having been derived from the Afrikaans “kis” or “wa-kis” (wagon chest). Apart from protecting linen from moths, damp and other damaging elements, the kist also housed spare candles, tinderboxes, baby clothes, precious keepsakes brought from their permanent previous homes and letters from loved ones still living in far-away Holland.

My husband bought me a kist when we first began to date almost forty years ago, (I was the tender age of 16, he was 18) and told me when I was old enough, he wanted to marry me! In my day, the young girls collected linen for their marriage and kept it a kist.

Tidying out my kist last week, my linen long since being relegated to a linen cupboard in my bathroom, I came across many precious mementos. A lock of baby hair wrapped in celephane; this was my older son’s – he is now 34 years old. There were black and white school photos and more recent photos of school reunions. I found a Parker pen and pencil set which my two sons gave me when they were still at school. I unearthed my sons' "First Baby Books" from under the special blue blanket great-granny Nan had crocheted. I sat back on the carpet and paged through each of them.What memories. I re-discovered a huge bundle of yellowing and faded love letters tied up with string. The love letters were handwritten, often on exercise book paper, penned surreptitiously in class, or on blue Croxely writing pad when at home. Is there anyone else out there who can remember dating like this?
On the top green baize-lined shelf, I discovered more recent mementoes: Poems I’d written and submitted to a website in 2004. Now, some of you may have noticed that I love writing! (Ha!) The photograph above is of two respective certificates for partaking in July-Write-A-Thons via a writing website. You are motivated by lovely CL's (community leaders) Eleyne and Mary to write anything and any amount up to 50,000 words in thirty-one days. You can read about here.

However, it was on different website that I submitted poems every month. I thought I might share one of them with you. (Oh, and BTW, I’ve not written any poems since.)

A rose by another name...

My garden, my heaven
Indigenous the leaven
The way to create paradise
Black collared Barbet
African Monarch
Will light up my skies

It's fairly obvious that the poem is about indigenous gardening (in South Africa) and the benefits thereof. However, I have taken poetic licence in some instances so just enjoy!
Posted by Jo at 4:30 AM