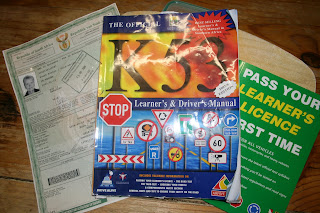 The much-thumbed instruction book in the middle. An extra book is on the right, while the very important learner's licence certificate is on the left! 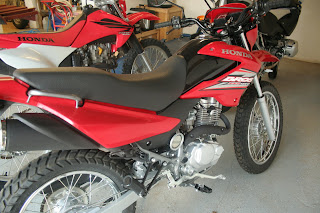 My pristine motorbike (front) waiting for me to ride it!
One would think that by the time you reach your fifties, writing tests would be anightmare relegated to the past. Not me. Two years ago, when I returned home after working in West Africa (more about this in a future post), I decided to brush up my knowledge of the ethnic language spoken in the Free State. I signed up for a course in SeSotho and began as a Grade 3 pupil. At the end of the first year, I wrote an exam and after swotting very hard, I passed. I’m now a Grade 5 pupil and continue to learn Sesotho much to the relief of my house- and garden staff!
In February this year, my husband bought me a motorbike for my birthday. For our family, this is not a strange thing. We bought our first motor bike - a Harley Davidson 1200 Sportster - in 2002 and travelled all over the country on it. Eighteen months ago, I wanted to surprise my husband when he returned home on break and bought him a BMW 1200 GS with very low mileage. Six months later we replaced it with a brand-new model and have travelled extensively on this very comfortable road bike.

I digress; as I said, earlier this year hubby bought me a motorbike to use around town. It is not as huge or powerful as his but it is shiny, it's red and it's very new. It's new because I’ve not actually ridden it yet. And the reason why I’ve not ridden it is that I do not have a motorbike licence!

Garnering courage, I finally booked an appointment for a learners licence and then I began to learn. I used the three weeks at my disposal to learn everything in the K53 book albeit parrot-fashion. I think I drove my family (two sons and two daughters-in-law have recently passed their motorbike learner’s licences) and my husband crazy! At every opportunity, I’d corner them and ask them whether I’d be asked this or that question. On one occasion I asked my hubby what I have to do when I want to make a right turn. His answer: (remember: he’s being riding motorbikes since he was about twelve!) “You give the accelerator a good ‘blip’, turn the handlebars and roar off in the new direction.” (Biker-speak "blip" = accelerate even more) Ha!

On the day of the test, I had to be at the motor vehicle testing office by 7.30am. The sturdily-built examining officer eventually arrived at 8.20am (this is Africa, Africa time prevails) He called us into the exam room and stalking around smacking a stick against his thigh to accentuate his words (the stick was like the one teachers used when I was at school, to point out things on the blackboard and every so often, to wake a dreaming learner ), he rattled off the rules of the exam: "All handbags in the corner, (thwack!) cell /mobile phones turned off (thwack!), and placed (thwack!) on my table" (thwack!). "If I catch you cribbing (thwack!), I'll confiscate your paper (thwack!) and you'll be (thwack!) banned from ever(thwack!) writing your learner's licence" (thwack, thwack!) .
Eventually, he placed the forms in front of us, and said: "Don't (thwack!) touch your forms until I (thwack!) tell you to" You start at (thwack!) 8.30 and you have (thwack!) one hour, I repeat (thwack!) one hour!(thwack, thwack!)" All eyes were on the clock on the wall which seemed maddeningly slow this morning. As the long hand reached the six, he said: (sotto voce, this time!) "You may begin" Once I started to do the test, all my “knowledge” (ha!) came flowing out of my brain into my fingertips. An hour later I handed my paper in, and was told to wait in the outer office. At 10.15 he came out with my form (I was the only one of two candidates who had passed) and I had to make two thumbprints on it. Then I stood in the queue and eventually (at 10.45) when I reached the front and handed my form in, it was processed and viola! I had my learner’s licence!
I now have eighteen months to learn how to ride my motorbike and go for the practical riding test.
One thing I’ve realised about this test: I’ve been driving in South Africa for almost forty years and only NOW I know what most of the road signs mean! Perhaps it should be compulsory for anyone over 45 to re-write this test...