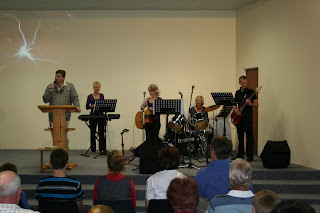 Our church worship team - my son, the bass guitarist is on the right and his wif, is in the middle centre; I'm at the back behind my keyboard with the new drummer to my left
I’ve always been involved in music... church music.
In the sixties, my sister and I played the wind-operated pedal organ in our little country church when the regular organist was indisposed or on leave. Two pre-teenagers who shared absolutely everything, one Sunday we decided to share the hymns for the service. This was no problem except that I was not as diligent about practising as my sister. When the congregation rose to sing one of the more difficult hymns, I told my sister to play it although it was my song. Even though we were very close, we had our differences and this time was no exception! My younger sibling insisted that it was MY song and that I play it. So we argued back and forth for a minute while the congregation waited for the accompaniment to begin. Eventually the minister realised what was happening and told us to “get on with it and start the hymn” which one of us did immediately (I cannot remember who!)

Time went by; I grew up and as a married woman, I was the church organist for about thirty years. However, it was only at the beginning of 2007, when my son’s fiancé (now my younger daughter-in-law) the worship leader in the church, invited me to play the piano keyboard in the band in this church. Soon after this, my younger son took up guitar lessons and is the bass guitarist in the band. My older son was the drummer. As if that's not enough (!), my older daughter-in-law was in charge of “Open Song” which meant she operated a computer at the back of the church ensuring that the text and graphics were projected onto the wall behind us musicians. This “family affair” came to an end when my older son and his family moved to Y-WAM a while ago.
As a conventional church organist I was always on my own. As part of the worship team in a Bible-based church, I experience unity and I have a ministry. I also have a challenge. I have to WALK the walk and not just talk the talk when it comes to my faith. The Lord doesn’t want my talents or my time, he wants me to draw closer to Him and get to know Him better. (“I want you to be merciful; I don’t want your sacrifices. I want you to know God; that’s more important than burnt offerings. “Hosea 6:6)
God doesn’t want me to hurt, slander and antagonise people. If I profess to have the Lord Jesus as my Saviour, I must excersise discipline, I must guard my tongue and I must show love and mercy to all people at all times. (“No, O people, the Lord has already told you what is good, and this is what he requires: to do what is right, to love mercy and to walk humbly with your God." Michah 6:8)
You see, as a committed Christian I need to show mercy, love and tolerance to everyone while at the same time, I need to get to know God better.
I have to "keep time" and stay in God's will so that my ministry is not null and void.
May God bless you in your specific ministry.
Posted by Jo at 4:30 AM