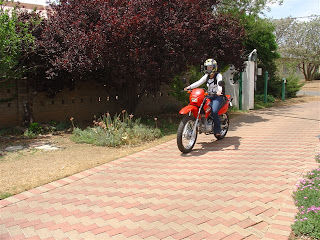 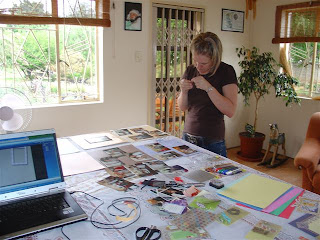 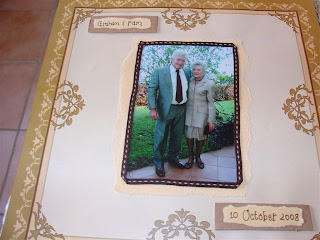 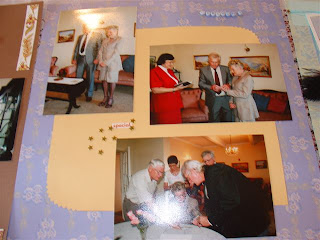 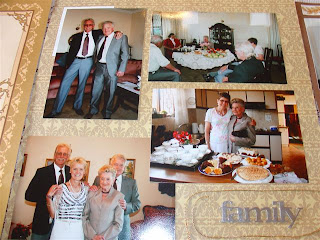 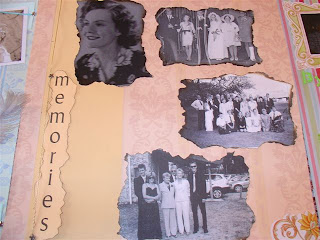 We scanned a photo of mum-in-law in her twenties, also my wedding photo and my two sons' wedding photos. Once printed, we scorched the edges and glued them in onto backing which matched the torn strip on which the text is printed 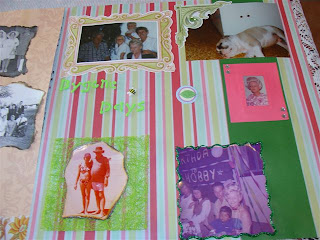 I unearthed old photos of family celebrations, a photo of my husband's parents when his dad was still alive and even a photo of a family pet! 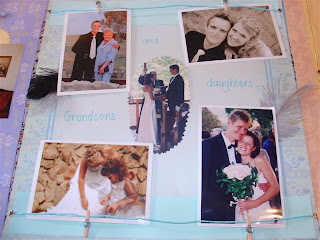 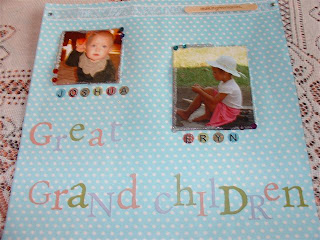 What is scrapbooking?
The WEB definition is as follows: The tradition of taking photographs and memorabilia and placing them in family keepsake albums along with relevant journaling.
Another description is: Scrapbooking is a method of preserving a legacy of written history in the form of photo, printed media and memorabilia contained in a decorated album/scrapbook.
When did scrapbooking originate? Believe it or not, when considering the question of where did scrapbooking originate, you need to pay homage to men like Thomas Jefferson and Mark Twain, both of whom were known to keep their favorite mementos in decorated books. Wanting to remember souvenir and reminders was actually more of a male hobby for many years. Mark Twain actually received a patent for a self-pasting scrapbook in 1873. So historically it was more of a male hobby.

When and where did modern scrapbooking originate?

The history of modern scrapbooks began in 1976 in Utah, when a woman named Marielen Christensen began designing creative pages for her family’s photo memories. She kept these pages in 3-ring binders, and after assembling over 50 volumes of these memories, was invited to display her albums at the World Conference on Records in Salt Lake City.

The interest that Marielen generated led to her actually travelling to demonstrate her techniques and materials, and eventually to her opening the world’s first scrapbooking supply store in Spanish Fork, Utah, in 1981.

Scrapbooking is a hobby that has been growing in popularity. The underlying goal is to preserve memories in a unique and creative way.

Some scrap bookers put separate themes in separate books, whereas others reserve each individual spread (two adjacent pages of a book) for different themes. A theme can vary from a particular event, a holiday, or what life was like at a particular moment of time. One spread, for example, may be reserved for a birthday party, another for a wedding, and another for a vacation.

Instead of just placing photographs in a photo album, a scrap booker aims to capture the feeling and the mood associated with their memories. Photographs are embellished with all sorts of additional items to help set the mood of a spread. Backgrounds, rubber stampings, cut-outs, die cuts, drawings, newspaper clippings, stickers, cards and other flat items are used to embellish photographs to set the tone. When you look at a page in a photo album, you see a few photographs, but when you enjoy the pages of a well-executed scrapbook, you are transported to a different time.

Which brings me to the reason (Phew!) for this post. I first discovered scrapbooking in 2002 (I know I know, I'm 30 - odd years behind the times...) I had ordered a book from an American writers’ magazine I subscribe to. A week later a huge parcel arrived at my front door, When I opened the box, I found a set of 6 (SIX) scrapbooking handbooks called Memory Makers. I phoned the distributors in the US and explained that I’d not ordered these books and that it would be too expensive for me to post them back, what should I do. The person on the other end of the line said: No problem, keep the set of books and that she’d post off the book I’d originally ordered.

Another five years elapsed before I thought about scrapbooking again. (Well, I did leave the country to work in West Africa for three years – more about this later.) Last year, while chatting to a friend who had attended scrapbooking classes in the city, I became keen to start this hobby. Later, while in the city with my younger daughter-in-law, I bought a complete kit on a sale (1/3 of the original price – what woman can resist a bargain?) My daughter-in-law told her mum about my new interest and together they bought me more scrapbooking materials for Christmas. Still, all these pretty accessories, also known as embellishments lay in the bottom of my kist in the lounge (you can read about memories of my kist here.) .

Earlier this month, my mum-in-law got married and I was the photographer at the wedding. (You can read about this here.We duly had the photo prints developed and it was my intention to place them in an album and post them to the “newly-weds” As I searched for a suitable photo album, the idea came up in my head to scrapbook the event. What better memories for an 80-year-old bride and her new husband, than a visual story about her her life up to the present?
And scrapbooking it, is exactly what my younger daughter-in-law and I did.

Last Saturday she brought her toolbox of beads, glue and other accessories she uses to do her beading. I took the scrapbooking kit and accessories out of my kist and unearthed old wedding and other family albums. We scanned and printed photos, snipped, tagged and glued.

Photographed above are the pages which we placed in the album binder and sent off to my mother-in-law.
Posted by Jo at 4:30 AM