No Water in the Township 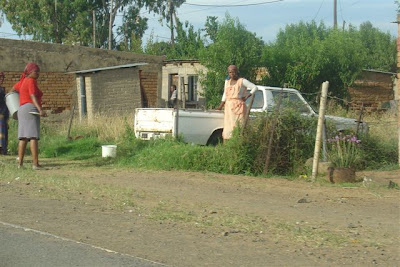 Does the title sound familiar at this time of the year? No water in the township/No room in the inn. When we hear the latter statement read from the Gospel of Luke chapter 2 verse 7,we kinda feel indignant that there was no room in the inn for a young couple, the woman obviously pregnant, who had travelled a great distance to take part in the census of the time.

Yesterday morning as I drove to the township to collect Emily, my houselady, I noticed streams of people walking from the other parts of the township (there are no "suburbs" in the township) all carrying buckets, large plastic bottles, jugs and other recepticles.

A little further on I saw a long queue of men, women and children, all with containers, waiting at a tap. It suddenly dawned on me that the township was without water. I'm not sure how or why, but obviously there were two or three water points in people's yards (not many gardens in the township either) which had water. Everyone was drawing from these few taps/faucets. 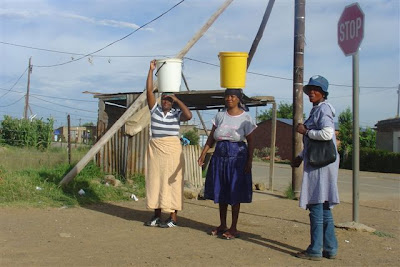 Sure enough, when Emily got into my car, she told me that they'd been without water since the previous day. The "people who work for the municipality" told her that the water purifying pump at the town dam, had broken. I assured her that as soon as I got home, and the municipal offices opened, I would phone the people responsible and enquire as to when the water would be available again. (Which I did and was told that the problem was being resolved as we spoke) 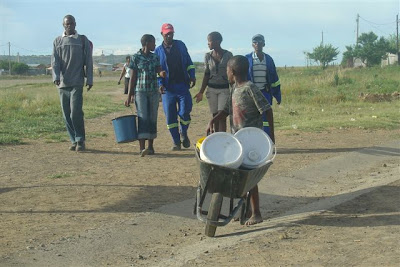 It brought it home to me how comfortable my life (and that of almost everyone else living in our town) is. And how we take so many of our amenities for granted. In the fifteen years that I have lived in this town, we have been without water exactly ONCE. It was on a Friday night in October 2008 . We had the family staying with us and I remember how irate I felt at the incovenience. Yet I have three garden ponds and the children's swimming pool was filled to the brim so we had water. We drew it from the pool first (and would have progressed to the ponds sifting out the tadpoles and water life first) and boiled it on the stove. We all had a reasonable "top and tail" sort of bath. We had water to flush the toilets and we had a vehicle and cash so we could drive to the cafe and buy bottled water to drink. 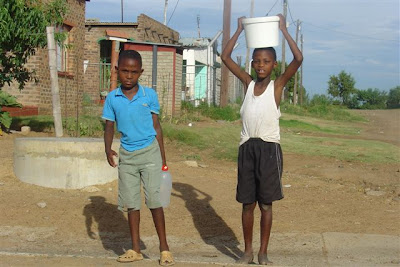 The majority of the people in the township subsist on between US$166 and US200 per month. Those are the families who have someone who has employment. A family in the township can consist of a mother (often no father, this is the norm, rather than the exception) and between four and six childen. If any of your relatives have succumbed to the modern scourge of mankind, you may have three to five more of their orphaned offspring. Then you may have your aged mother or father living with you which is more of a blessing than a problem because at least they draw an old-age pension of US$113 per month. On the downside, this often leads to abuse because a member of younger generation takes the aged parent to sign for and collect his/her pension and then takes it from them. 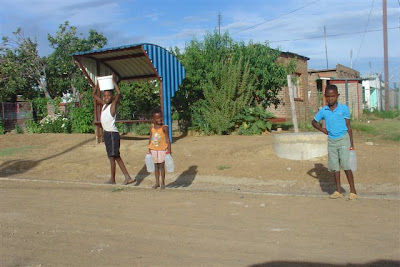 There are literally thousands of people in the township who don't have any regular income and I don't know how they survive. Many people do "piece work" which is casual labour - a day at a time at the legal going rate of US$7.54 per day. Tiny children sit at the side of the road (above) while their parents are out earning a living
Times are tight all over the world; we're all feeling the economical crisis this year, but none so much as the people in our townships right across the country.
A week or two ago I posted about the "fatherless/absent father" homes especially in our townships. Of Emily's four grandchildren only two have a father and a mother who are married and have the children in their home. The other two, from Emily's other two daughters, live in Emily's home with no fathers in the equation. And these two children are the truly blessed and fortunate ones. They have a loving grandmother, (who is in the firm employ of yours truly) a mother and an aunt to care for them. Yesterday morning, not only did I see people walking miles to collect a bucket of water; I also saw dozens of children sitting on the street corners with nothing to do. Their mothers had gone to work in the towns (and that is a blessing) but there are no parks in the township. During the holidays there is nothing to keep these children occupied until their parent/s arrive home that evening. Even then, they are shouted at by exhausted parents who are struggling to make ends meet. Often they are chased out of the house and told to go and play in the street again... 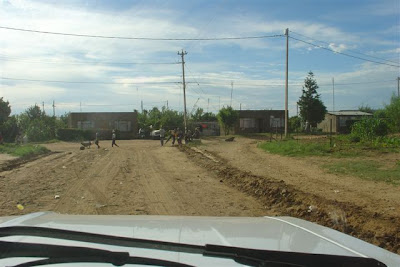 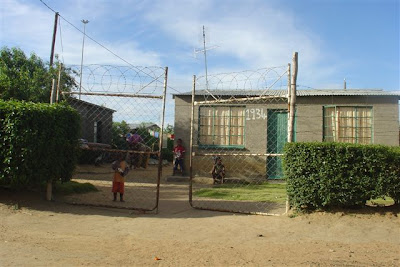 Emily's grandchildren (see above, in front of her house) are of the more fortunate and blessed children in the township. In the photo above this one, there are many children sitting on the street corner with nowhere to play ball and nowhere to go. Definitely no extravagant celebrations for them at this time of the year.
My household staff which consists of Emily, houselady; John and David, gardeners and Simon, a once-a-a week gardener, (becuase he has no other income) will each receive a hamper of groceries from me this afternoon. I also buy stewing meat and chicken portions for each of them to cook up with their families in the township on Christmas day. Since they've been in my employ, I have given them each a Christmas / annual bonus. This is a month's salary (thirteenth cheque, as it were) in cash. Next week, as normal, they receive their December salary. But today they are given an extra month's pay. This is all I can do for them; to quote a wise man (with apologies, I forget who!) I am but one, but I am one. So I do what I can.

I wish all my blogger friends a very blessed season with their loved ones. Thanks for your love, visits, comments and kindness during 2009.